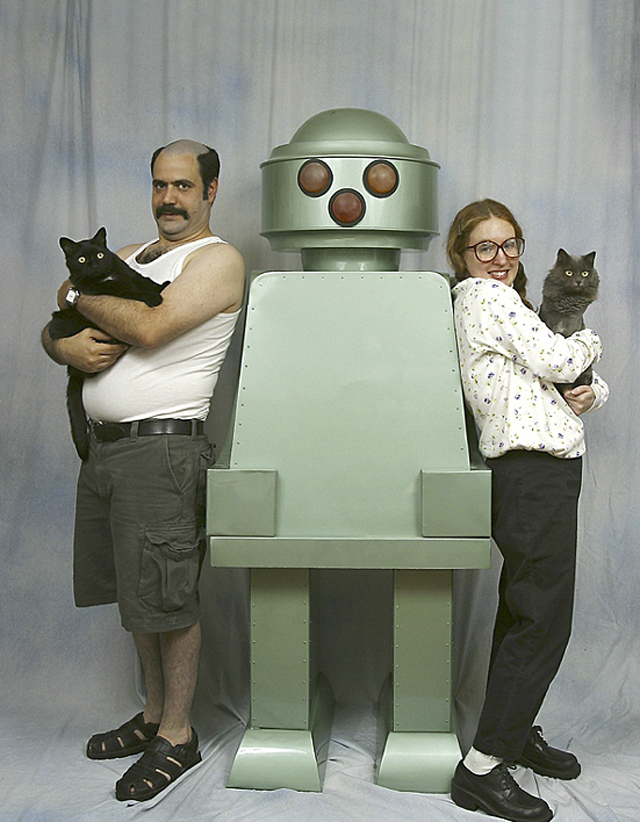 KEARY ROSEN is an interdisciplinary artist working in drawing, photography, video, performance and kinetic sculpture. He often references science fiction narratives and imagined technologies from the past, exploring language and its associative meanings, as well as how our relationship to technology reveals our emotional experiences as human beings. Keary Rosen received his MFA from Rutgers University’s Mason Gross School of the Arts in 2000. He currently lives in Raritan, NJ.OtherPeoplesPixels: In your statement, you acknowledge the influence of sci-fi on your work. Tell me about your personal history in relation to sci-fi. What's your favorite sci-fi text of all time?

Keary Rosen: I naturally gravitated to science fiction writing because I appreciate the sometimes fantastic and covert ways the genre attempts to grapple with certain philosophical quandaries that I am interested in (issues of racial equality, issues of quality of life, issues of power, issues of surveillance, artificial life vs. organic life).

There are a number of novels and short stories that I’ve read many times. I don’t have a single favorite… I’ll give you a list of works that never fail to inspire me: 2001 A Space Odyssey by Arthur C. Clarke, I, Robot by Isaac Asimov, Do Androids Dream of Electric Sheep by Philip K. Dick, Frankenstein by Mary Shelley, Journey to the Center of the Earth by Jules Verne, The Time Machine and The War of the Worlds by H.G. Wells, R.U.R. by Karel Capek and the whole Hitchhiker’s Guide to the Galaxy series by Douglas Adams.

In addition to written works, I’ll geek-out even more by divulging that I’m also a huge fan of sci-fi television and cinema.

I’ve begun paying homage to my favorite sci-fi works in the drawing series M-Class Planet. In these drawings, I’ve inserted myself into imagery I’ve either appropriated directly from a visual source or gleaned from specific narrative descriptions. (I am a droid. I am Dave Bowman piloting the space pod. I am Powell on the back of the of the robot chasing Speedy. The robots rebelling against humankind are modeled in my image.) 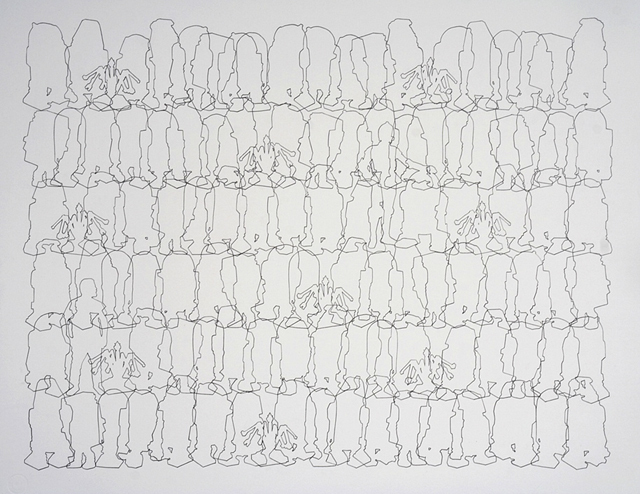 OPP: One of the interesting aspects of sci-fi movies and TV in particular is the way the visual representation of the future is quickly dated. Like, in 80s movies, the things the computers could do were amazing and fast, but they still had an MS-DOS interface, which is laughable now. It seems that your work is exploring specifically these outdated projections of future technology in your life-size sculpture 1.530R The Robot. That's no Cylon! It's more like Rosie from the Jetsons. I'd love to hear more about this piece. What was the video projected on the belly of 1.530R The Robot?

KR: 1.530R The Robot is an amalgamation of many atomic age tin toy robot designs from the 1940s -1960s. I’ve always been interested in automata, and tin toys are a modernist/contemporary continuation of that tradition. I like the idea that a simple or low-tech device can generate movement.

It’s true, 1.530R is no Cylon. I chose to create a form that looked dated because I wanted to reference a time period that began using media and commerce to popularize this kind of image as a symbol to represent a preoccupation with the technological advancements that were taking place and how they might impact the future. 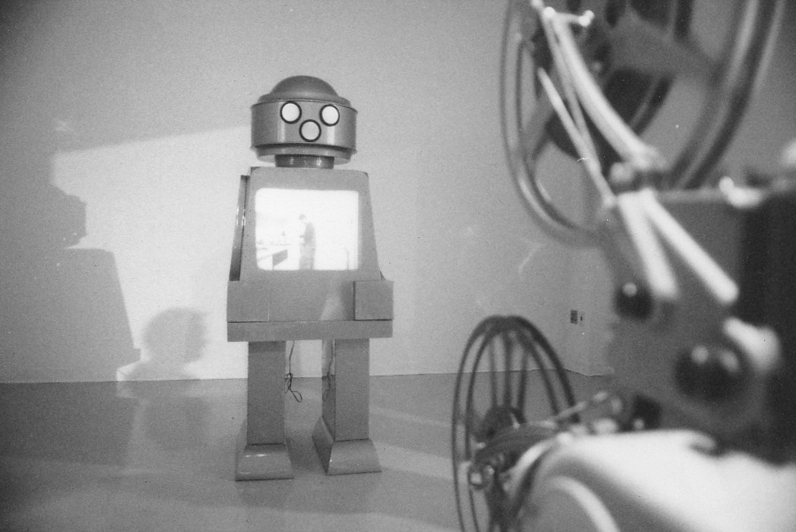 The Atomic Treatment Installation
Installation includes: an antique iron and marble theater table, two antique theater chairs, a 1950’s 16mm film projector, a 1960’s reel-to-reel tape player and 1.530R The RobotOPP: The Barker is a kinetic sculpture with sound. It appears to be an alien life form, either kept alive or imprisoned in a glass vitrine with a speaker. The viewer is able to hear its booming voice spout "excerpts taken from an early 19th century American Dictionary."  It's gross, in an awesome way, to watch this creature speak, and the timbre of its voice creates the sense that what it is saying is very important, despite the fact that it doesn't seem to be. Why did you choose the dictionary as a source, and how did you decide what it would say?

KR: The Barker was a real breakthrough, in terms of technology and studio process. Up until this piece, the kinetic devices in my work were mechanical in nature (gears, motors and belts) and the forms were generally composed of rigid materials such as ceramic and steel. I would spend a great deal of time tracking down parts or fabricating custom gadgets. In The Barker, I began working with cast silicone and, most importantly, digital technology.

I was invited to participate in the testing/evaluation of a new user-friendly and multi-functional robotic motherboard through an outreach collaboration between The Pittsburgh Art and Technology Council and Carnegie Mellon’s CREATE Laboratory. The robotic motherboard made function control and response a simple matter of programming. I had gone from analog to digital! The motion range inherent in the robotic motor and motherboard naturally suggested speech patterns and I went from there.

There is an inherent absurdity of this grotesque form doing anything, much less giving advice or information. I culled its script from a 19th century American dictionary, because I wanted to work with codified, authoritative, precise, and potentially dated definitions of words. The words I chose to look up included: origin, creation, death, reason, aggression, animal and breed. I selected excerpts from those word definitions and their lists of examples for The Barker to blurt out. The statements ultimately become disjointed tidbits or morsels of much larger abstract concepts we have attempted to explain.

The Barker put me on a path that ultimately led to the work I am currently creating. It is an installation that consists of a landscape environment inhabited by three Komodo Dragons that have the ability to sense and speak to viewers (I am utilizing the same digital technology used in The Barker). Each creature will have a unique voice and perspective, both literally and philosophically. They will be on top of and surrounded by rocks of various sizes and shapes. These rocks are cast out of urethane resins.

The Barker
28” x 38” x 63”
Birch Plywood, Oak, Poplar, MDF, Naugahyde, Acrylic, Silicone, Qwerk Robotic Unit, Motion Sensors, Speaker, Light Unit.OPP: You've done several collaborative videos with Kelly Oliver, in which you write and perform the text and she films and edits the visuals. How did this collaboration evolve? Is there any back and forth, or do you each stay in the roles you've chosen?

KR: Kelly and I met in art school. At the time, she was studying painting before gravitating toward film. We’ve been married for 10 years. Her method of making video is very poetic and indirect, based on edits of disjointed and mysterious images. The pacing and narratives emerge and submerge. My text pieces work within these same parameters. An important part of my process is to establish a rhythm and character that feels appropriate in regard to the content. It seemed like a natural progression to collaborate on work together, and the results have shown around the world at film festivals, galleries and museums.

Second Firing
Running time: 2 min 30 secOPP: Writing and language is a recurring part of your work, whether it is the monologue of The After-Dinner Speech, the appropriated statements of The Barker, or the non-sensical poetry of First Firing or the Lincoln Library of Essential Information Volume I and Second Firing, in which the audio is a running list of words that are linked more by sound than meaning. (My favorite phrase is "placenta polenta placebo gazebo.") Has language always been a part of your art practice? Could you talk about how you approach writing?

KR: I created my first pieces built around words and the spoken language as an undergraduate. For as long as I can remember, I’ve been interested in oral and written communication.

I don’t think there’s anything particularly unique about my writing process. Whether I start with research, accumulated stream of consciousness writings or wordplay, it always eventually transitions to a process of editing and composing.

When I complete a written work that I know I will read for a recording, I begin to experiment with voices. The voice I choose determines the speed, emotional responses and mood.

OPP: Tell me about a piece from your past that you think was a failure, but taught you a lot about your work.

KR: Why? What did you hear? Were you at that opening where the Mars Rover’s battery died?! Seriously though, I’m that person who likes to work through the burn. If something isn’t working, I have to keep at it until I am satisfied. 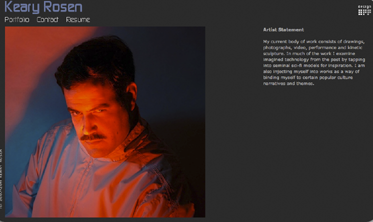