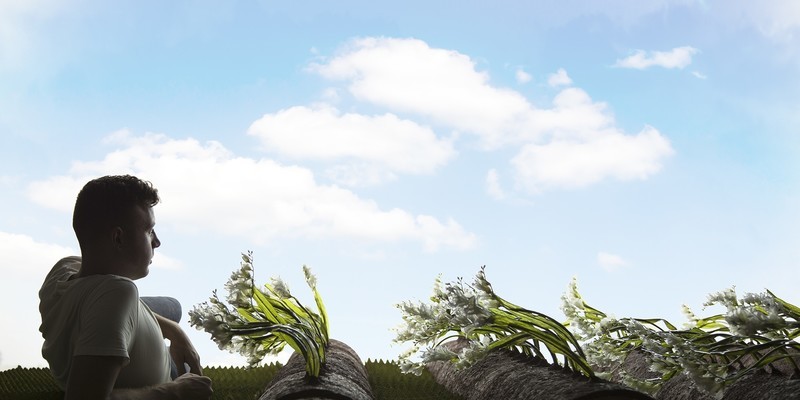 Combining digital projection, wood and ceramics, KYLE TRIPLETT evokes vast, outdoor places within the confines of the gallery. The romantic, the picturesque and the artificial are foregrounded in his simulated landscapes, but each is very much a real place. His backlit digital prints, which began as documentation of his installations, capture the wistful, longing figure in relation to his created spaces. Kyle received his BFA from Southeast Missouri State University (2008), a Post-Baccalaureate certificate from Louisiana State University (2009) and his MFA from Ohio University (2013). He's been an Artist-in-Residence at Red Star Studios (2015) in Kansas City, Watershed Center for the Ceramic Arts (2014) in Newcastle, Maine and Kansas State University (2013-2014). His most recent solo exhibition False River just closed in March 2016 at Yeiser Art Center in Paducah, Kentucky.  Kyle's backlit photographs are currently on view until May 21, 2016 in the group show Garden Party, alongside a collaborative sculpture with Rain Harris (also of OPP blog fame), at the Belger Art Center in Kansas City, Missouri. Kyle lives and works in Ruston, Louisiana.

OtherPeoplesPixels: In your statement, you say "I am interested in producing work that is specifically of place, as opposed to work about place. That is, asking questions and responding to the ‘virtual here and there’ rather than traditional ideas of site specificity." Could you parse this out further?

Kyle Triplett: My installation work is rooted in the desire to create place. I’m interested in using the space of the gallery as a platform to create an imagined, constructed landscape as opposed to recreating a known or remembered experience. The work is site-reactive in that the gallery only dictates the size of the piece. Other than that, the work is not about a specific site. It’s about constructing a structure that attempts to hit most of the notes that a real landscape does. I approach the work with the understanding that it’s fundamentally impossible to recreate nature, but I think there is something compelling in the attempt and failure. The number of individual elements that make up a scene is a little maddening, but again, there is something interesting in the attempt to create a landscape one single grass blade at a time as in Untitled, OH #8. 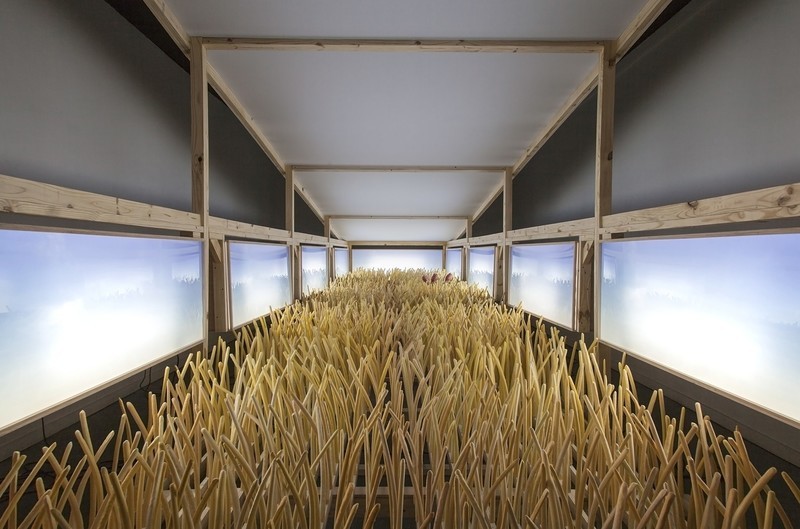 OPP: You employ ceramics, wood and digital projection to create immersive environments. What was your first medium and how did you come to this balanced combination of the digital and the tactile?

KT: My first experience with ceramics, like most, came through pottery. I took a ceramics class in high school and really enjoyed it. I took another ceramics class in college after three years pursuing a degree in American History and haven’t left it since. At the beginning of the last semester of undergrad, I shifted away from pots and started making ceramic-based mixed media sculpture. I started playing with digital tools shortly after starting graduate school at Ohio University in 2010. For the first batch of work, I created ceramic objects onto which I projected a digital surface. That work morphed into larger installation pieces. I can honestly say I had no interest in working this way prior to graduate school, but I deliberately chose a graduate program that was concept driven rather than anchored in a specific material in order to have more flexibility with my work. I started playing with space as a material due in large part to the spacious critique rooms available for installation-based projects and a desire to work on a larger scale..

The balance of digital and tactile is still a struggle. Because I’m interested in working on a landscape-sized scale, I’m always searching for something that feels substantial or big in the work. Sometimes that manifests as nine thousand wooden dowels with pinched clay on the end as in Once a Day or as a large projected live video feed as in Untitled, OH. #7. 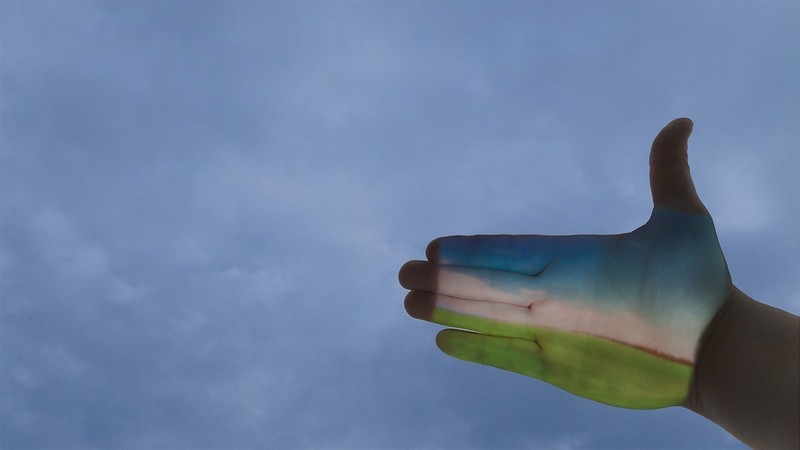 OPP: The images titled In Other Fields appear to be documentation of installations (based on how the media is designated), but they are quite evocative as photographs? Can you explain this work for those of us who have only encountered it online?

KT: While I was working on large installation pieces in graduate school, I became interested in the documentation images I was making to record the work. Those documentation images morphed into creating staged images. The first few from 2013 were both documentation images as well as specific installations designed to be photographed. They were a way to work through ideas. These projects allowed me to interact with a site as an installation and to create images of that interaction that could stand alone as independent works themselves. Since 2014, I have been creating images that are solely shown as backlit digital prints. I am attempting to do the same things with these prints as with my larger installations. The digital images portray a built environment with handmade ceramic components. Conceptually, I am interested in presenting a moment of contemplation and longing while also presenting a window in the image leading to a different place, such as an in Tulpomanie. 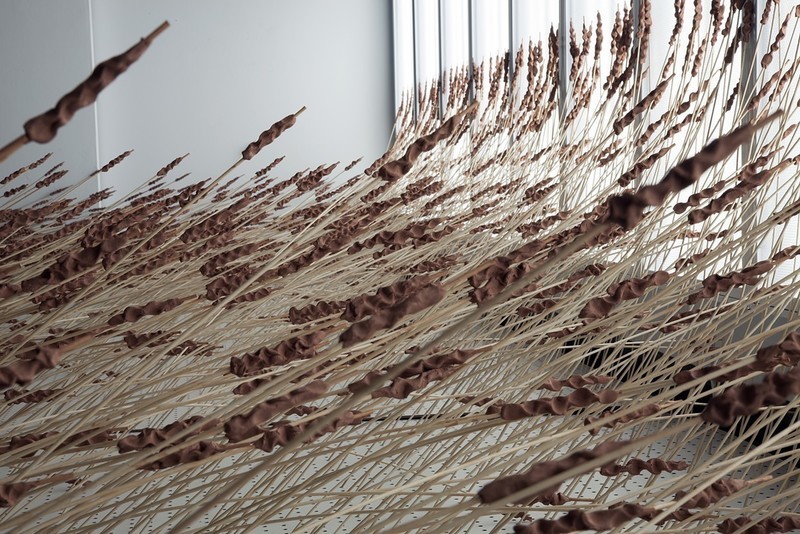 Once a Day (detail)

OPP: Fields are visual staples in your work. They show up as video projections and as ceramics. Once a Day (2015) and Untitled, OH. #8 (2013) are examples. I'd like to hear your thoughts on fields, both how you use them in your work and how you experience them in your life.

KT: I grew up in western South Dakota: fields and open spaces are very much ingrained in me. I don't know that fields really specifically registered with me when I was younger, but I remember feeling literally and figuratively a long way away from a lot of things.

Beyond that, a field is a single space, demarcated by use or purpose. A field is a place. I think about place as defined by three elements. First, a specific location is needed: a here and there. The second is a locale, the material setting in which social relationships take place: a wall, a road, a field. The final element is “a sense of place,” the subjective and emotional attachment a person or groups of people have to a place. This final requirement begins to function conceptually rather than as a social or graphic reality. As an artist I am interested in ways that I could construct and provoke this subjective and emotional attachment in a viewer. . . or at the least a sense of familiarity or distinctiveness.  A field is a tract of land, which makes me think about distance and time. A field as an image tends to look like everywhere and nowhere simultaneously.

The work that is titled In Other Fields is in large part about longing or yearning to be some other place, be it in time or space. Each piece in the series presents a figure in a given place interacting with an image of someplace else. The constructed objects that make up the piece are, much like the installations, again this attempt to recreate nature or another place. 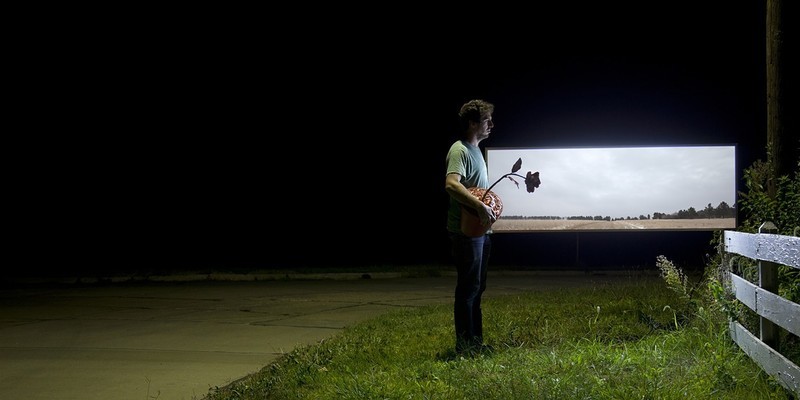 OPP: What are you working on right now? What's on the horizon?

KT: I’ve just finished up a busy run of exhibitions. I had a solo show at the Yeiser Art Center in Paducah, Kentucky where I was able to put up a new installation. The piece was a companion to the installations Once a Day that I did last year. The new piece, titled False River, employed a similar structure as the one used in Once a Day to divide the gallery rather than fill the space completely. False River is a very long and narrow lake in South Louisiana that was once part of the Mississippi River and that has since been cut off. The name caught my attention because it describes something by what it is not, but there’s also irony behind it. It’s interesting to live in a state that has a very unique relationship between land and water. Nothing is solid, and it feels like there is water everywhere.

I teach full time at Louisiana Tech University, so summer break brings welcomed studio time. This summer I will be heading to Bechyne, Czech Republic for an international ceramic symposium in July. I am currently researching different milling methods using a CNC router setup on ceramic surfaces as a way of potential manufacture. This could open up some avenues for creating more complex pieces. Teaching at a university with a strong architecture program has also got me thinking about different ways that my work can become more public by incorporating it into interior design. 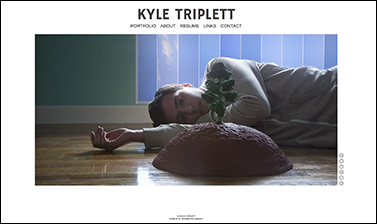