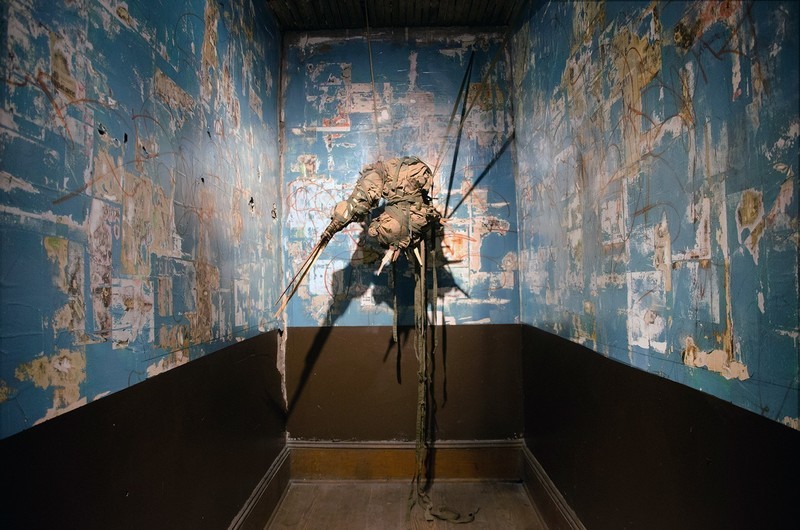 Both the vulnerability and the strength of the Black body are highlighted in ANTOINE WILLIAMS' ink drawings on velum, collages, paintings and black and white wheat-paste installations on white walls. Inspired by personal experiences of a rural, working-class upbringing in the South and by themes of Otherness in sci-fi literature, he presents a catalogue of nameless, faceless beings. Part human/part animal/part stereotype/part racial trope, each is a conglomeration of signifiers of race, class and masculinity. Antoine earned his BFA in Art with a concentration in illustration from UNC-Charlotte in 2003 and his MFA in Studio Art from UNC-Chapel Hill in 2014. In 2015 he was a recipient of the Ella Fountain Pratt Emerging Artist Grant, and in 2016 he was a Southern Constellations Fellow at Elsewhere in Greensboro, North Carolina. His recent solo exhibitions include The Wound and the Knife (2015) at Sumter County Gallery of Art (Sumter, South Carolina) and Something in the Way of Things (2014) at the John and June Alcott Gallery in Chapel Hill. His work is on view in Dress Up, Speak Up: Costume and Confrontation at the 21c Museum Hotel in Durham through July 2017. Antoine is an Assistant Professor at Guilford College in Greensboro and lives in Chapel Hill.

OtherPeoplesPixels: I want to be transparent that I’m a White artist interviewing a Black artist who explores the image and experience of the Black body in his work. I ask questions based on what I see, but what I see is through the sometimes-unconscious lens of Whiteness. Is there anything that non-Black viewers repeatedly misinterpret about your work? In your experience, do Black viewers see different things than non-Black viewers?

Antoine Williams: I believe that everyone brings something different when viewing the work. However due to the shared experience of most Black people there does seem to be some overlap in the response to the work. When it comes to non-Black viewers, I’m less concerned if the work is being misinterpreted but more concerned with the thought process that leads to one’s conclusion. I make the work somewhat vague and open-ended to invite a more honest response because I want to embrace the various interpretations of signifiers. It’s less about what I’m trying to tell you about my experience and more about exploring how this imagery makes you feel. 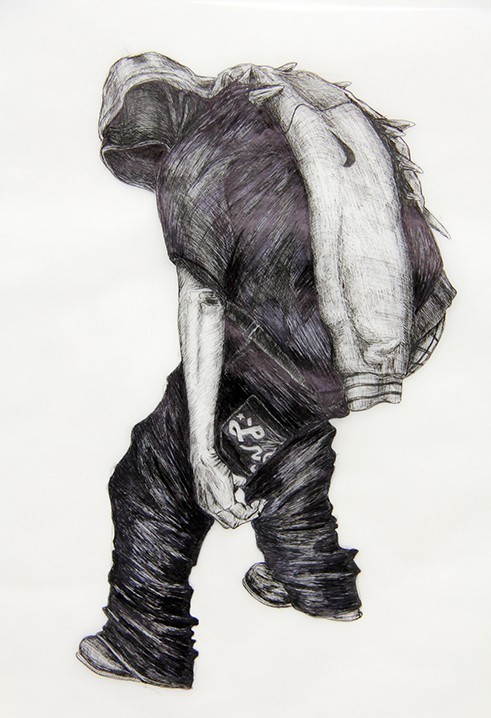 OPP: I feel empathetic, sad, angry and uncomfortable. I think about the way Black people have been victimized in America and how they stand up for themselves. I think about how monstrousness (i.e. otherness) is projected onto Black people by mainstream media and law enforcement and about how constantly being on the defensive affects a human. The figures are often hunched, as if in pain or preparing to fight. They have grown horns and sharp teeth with which to protect themselves. Are these figures metaphors for an embodied, emotional experience or renderings of a potential evolution?

AW: The more humanistic figures—the ones usually draped in clothing—reflect the day-to-day burdens with respect the race and class, which have become normalized. The horn protrusions can be viewed as either a weapon for either aggression or a means of protection. However, the use doesn’t matter because the horns exist as result of an environment and system that has produced them.

Some of the more animalistic figures are creatures born out of attitudes and actions around race and class. They’re a part of a contemporary mythos of the Black experience. Indifference and fear lead to policies and public sentiment that negatively affect Black people and communities of color. Policies that promote housing discrimination, mass incarceration and decades of over-policing to keep the fear of the other at bay, I believe, have lead to the high profile shootings of Tamir Rice in Ohio or just recently the deaths of Terence Crutcher in Tulsa and Keith Lamont Scott right here in my home state of North Carolina. Like the protest in Charlotte, these creatures are born out of years of animus and neglect for entire communities. 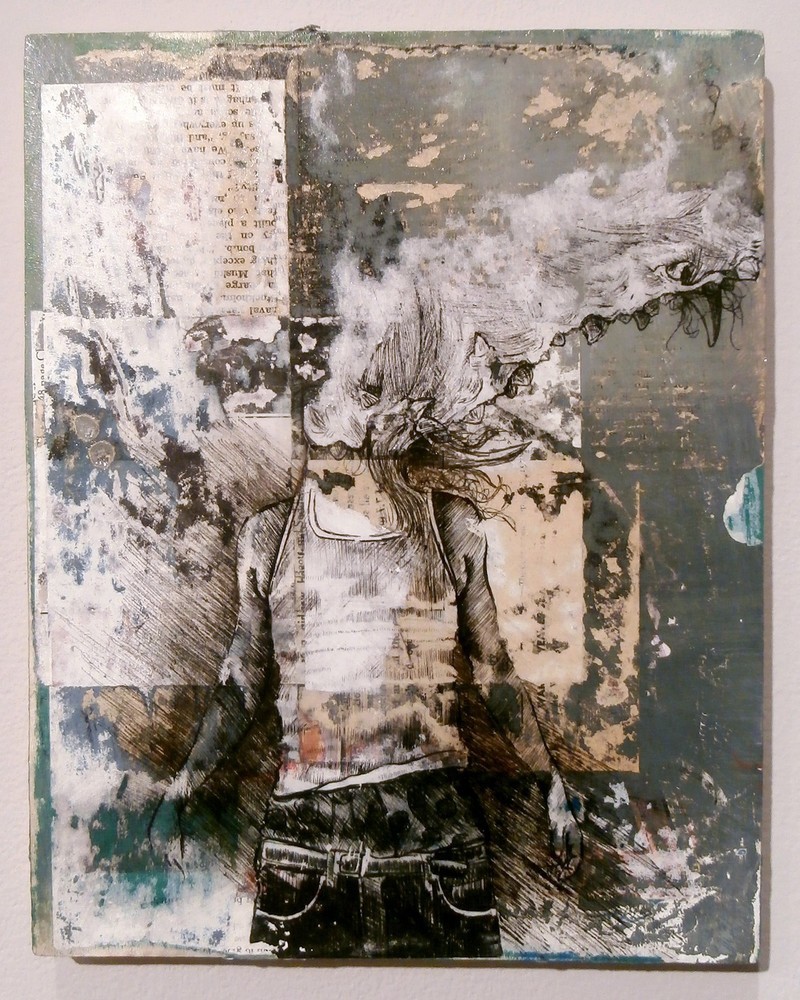 OPP: You talk about the figures in your work as “creatures, hybrid-like human-animal deities.” I’m struck by the fact that these figures never have human faces or heads, unless those heads are bound or covered—sometimes by choice and sometimes by force, as in The Ain't Gots no. II (For Freddie Gray) (2016). Why no faces?

AW: There are no faces because I’m speaking about systems, not individuals. We are witnessing how the Black bodies are reacting to these systems.

OPP: In what way are they deities?

AW: These are not deities in that they are worshiped in the traditional sense, but they rule in a transitional space that exists between race and class. I do view them as gods but as god of the gaps. They are created from attitudes towards race, and class. Indifference and apathy are attributed to them.

Originally Filipino mythology got me interested in this current body of work. More recently, the H.P. Lovecraft mythos has been greatly influential to my work. Lovecraft, most well know for his Cthulhu series, is a writer of sci-fi or cosmic horror. He has created this complex mythos of gods, creatures and cultures. His work is beautifully written, yet very problematic in that Lovecraft was a racist whose views seeped into his work. He had this disdain and fear of the other. His works in a sense are a metaphor for white supremacy. 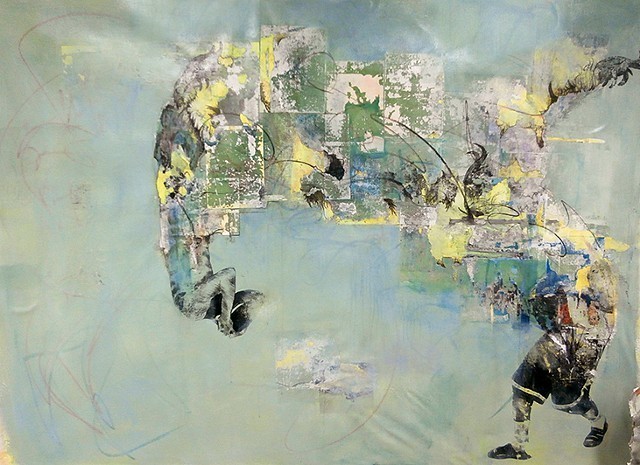 OPP: In installations, you merge three-dimensional materials—Seatbelt straps, wooden stakes, plastic sheeting, fake flowers, extension cords, beer cans and Sheetrock—with your drawings. Can you talk about what pops off the wall versus what stays flat?

AW: I merge the three-dimensional object with flat imagery to emphasize that it is, in reality, a drawing—an illusion of Black bodies. These flat representations of Black people are often how we are perceived in society. However, the three-dimensional objects invade the viewer’s space and draw them in. The actual experiences of Black people and the culture we create are often separate. Think about hip-hop and the inequities within the communities where this culture originated.

OPP: What about your placement of the wheat paste drawings hovering in the empty, white field of the gallery wall, as in Future Perfect (2015) and The Ain’t Gots (2016)?

AW: When I first started drawing these figures, they were often on a very busy and colorful surface where they could easily get lost so you would have to really work to see them as whole. In a gallery, the contrasting white surface or void is disrupted, forcing one to focus on this Black body. Plus these creatures exist in an in-between space, so the white wall supports that. Also, aesthetically I like working with the negative space created by shapes of the bodies. 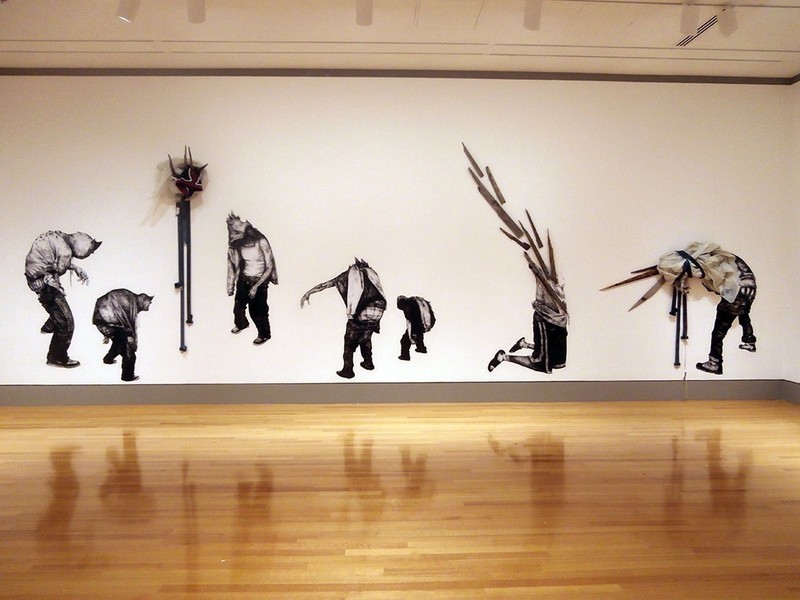 OPP: Tell us about your most recent installation Because They Believe in Unicorns (2016). We’ve seen the form in the center of the room in other installations and drawings, but it is always attached to the head and shoulders of a human body. The representational body has disappeared, but of course it is still there in the bound, hanging form made from Surplus WW II military tents, wood and thread.

AW: The piece is installed at the Elsewhere Museum in Greensboro, NC where I did a residency this past summer. I had just finished reading The New Jim Crow by Michelle Alexander and wanted to look at this ideal of racial indifference, which is spoken about at length in the book. This piece was also started the week after the murders of Alton Sterling and Philando Castile. The War on Drugs and over policing which has led to mass incarceration which has created a new underclass of citizens consisting of most Black and Brown men are allow to exist not because of racial aggression but rather racial indifference or color blindness. The ideal of not seeing color or color not mattering in a nation with America’s past is a myth, like a unicorn. Belief in this myth allows for white supremacy and other racial inequities to persist.

The piece itself is an entire body. Therefore I didn’t believe having a representation body was necessary. I wanted the form and shape of the figure to reference something that was alive.The figure is my version of a unicorn; a Black person who’s blackness is not relevant. The figure is constructed of WWII tents, a reference to America romanticizing war. In this case the War on Drugs. I wanted to play with the perception of whether the figure is being elevated or hung. 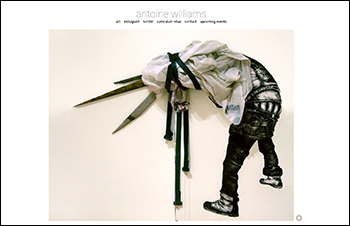 Featured Artist Interviews are conducted by Chicago-based artist Stacia Yeapanis. When she’s not writing for OPP, Stacia explores the relationship between repetition, desire and impermanence in cross-stitch embroideries, remix video, collage and impermanent installations. She is an Adjunct Assistant Professor in the Department of Fiber and Material Studies at The School of the Art Institute of Chicago, where received her MFA in 2006, and was a 2011-2012 Artist-in-Residence at BOLT in Chicago. Her solo exhibitions include I Still Haven’t Found What I’m Looking For (2013) at Klemm Gallery, Siena Heights University (Adrian, Michigan), Everything You Need is Already Here (2014) at Heaven Gallery (Chicago) and When Things Fall Apart, in the Annex Gallery at Lillstreet Art Center (Chicago). Stacia created site-responsive installations for two-person show Form Unbound (2015) at Dominican University's O’Connor Art Gallery (River Forest, IL) and SENTIENCE (2016) at The Ukrainian Institute of Modern Art. Her work is on view in SHOWROOM, curated by Edra Soto, at the Chicago Artists’ Coalition from September 16 - 29, 2016.