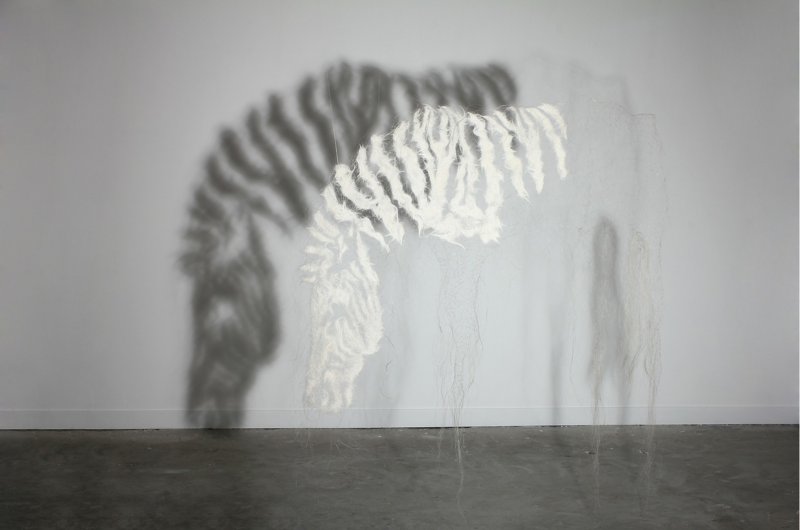 T.C. MOORE's poetic, sculptural eulogies for deceased and endangered animals shift us out of our human-centric mode into the quiet contemplation of the lives of other beings. She creates knotted, sewn and etched works with shed horse hair, hoof clippings, found bones and scraps from the fur industry, often mending or embellishing the found materials in the spirit of healing and honoring. After completing degrees in Interior Design (1980), Architecture (1984) and Landscape Architecture (1986), T.C. went on to earn her MFA in 2012 from JFK University, Berkeley. She has exhibited widely throughout California, with solo shows at Garage Gallery in Berkeley and Gallery Route One in Point Reyes Station. In 2016, her solo show Interconnected at the Compound Gallery in Oakland featured her horse hair sculptures. Two works were featured in the 2016 West Marin Review, which was awarded the “most visually stunning book” by the New York Book Industry Guild. T.C. lives in
Santa Rosa, California.

OtherPeoplesPixels: Horse hair is a dominate material in your sculptural, fiber-based practice. What is your personal history with horses?

T.C. Moore: I was one of those annoying little girls in class that was always daydreaming and doodling in the margins of her rulers, far more interested in living in the confines of my imagined world then being present in the one where everyone else seemed to exist. My earliest fantastical recollections included people replaced by animals; animals seemed safer, kinder and cuter. My parents’ marriage was difficult, and my mother often sent me off to her mother’s farm in order to relieve herself of parental duties. It was on this farm where I recall my first aesthetic experience.

My grandparents did not have horses, but I remember the day two young women rode up onto my grandparents’ property. The horses were enormous, frightening and the most beautiful animals I had ever seen. I became obsessed with horses from that day forward. When people asked me what I wanted to be when I grew up, I said a horse. It took me some time to understand that you do not grow up into another species. I painted, drew and pretended horsies until middle school, when it was no longer cool to do so. My bedroom however, remained my private horse cave, with walls plastered with horse posters, drawings and pictures of horses cut out of newspapers and magazines. I always wanted a pony for Christmas, but my parents could not afford one. The desire for anything and everything horse persisted into adulthood. When my mother died I inherited enough money to finally purchase the pony I never got for Christmas. I now own two ponies, a mare named Tinka and a gelding named Arlo. 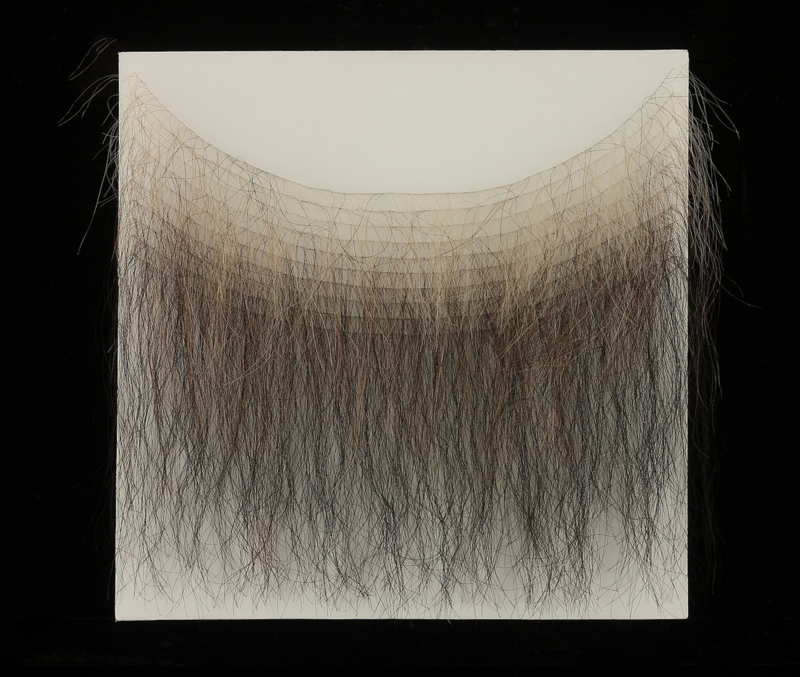 OPP: When did horse hair first enter your art practice?

TCM: In grad school I was struggling with my paintings; I felt all I was doing was illustrating. One spring day in 2010, I was with my horse shedding out her winter coat. This is a yearly occurrence. Most horse owners throw this unwanted undercoat in the garbage. I was using a rubber curry-comb, and it became clogged with hair, so I dumped it upside down onto the stall floor. I had done this many times before, but somehow this time I saw the hair in a different light. A shock of excitement ran through me, and I started collecting my horses shed winter coat. Horse hair as a medium felt so authentic and true to my being. I loved the color, the smell and the feel of it. The idea to use it came about from this one simple, pure and intimate act of grooming. The hair has a spiritual quality, like the horse is always present with me, even when I am not actually with a horse. The hair becomes a surrogate, not just for horses, but all animal essences. 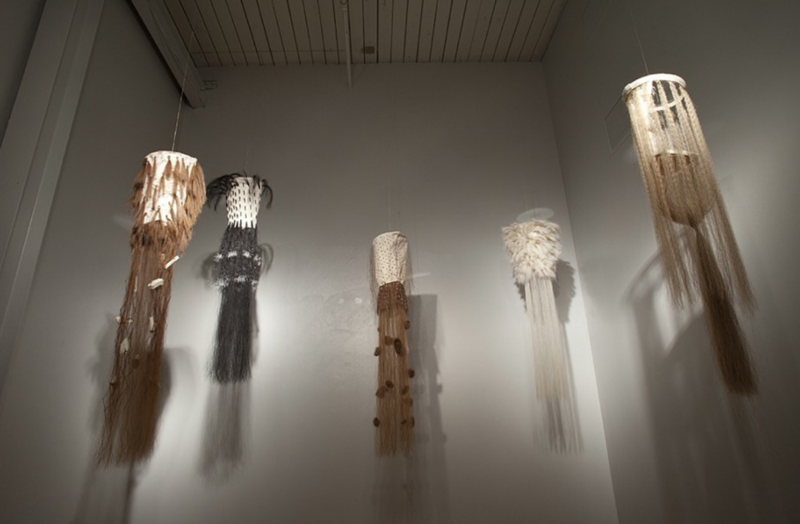 OPP: How do you have so much of it? Is it just from Tinka and Arlo?

TCM: Collecting, organizing and storing the hair has become another side of my artistic practice. I started by asking other horse owners if I could have their horse’s shed winter coats. I also advertise on a local community web-site for horse owners and ask people to save the hair—it doesn’t have to be clean. I pay for pick up or postage. It was easy from there to start also working with mane and tail hair. I also purchase this hair on-line, so I can get the lengths and quantities that I need.

OPP: What are your art historical inspirations? 49 Days of Mourning (2013) references both a quilt and the Modernist grid. The series of horse hair “drawings” on canvas …in a smooth and flowing manner (2012) make me think of a less rectilinear Agnes Martin, while the Feed Bags (2012), on the other hand, recalls the off loom woven structures of Claire Zeisler and Leonore Tawney. 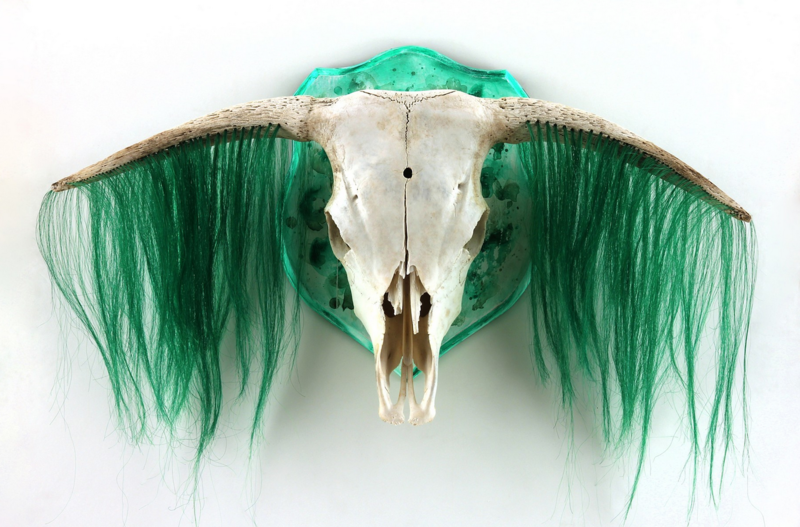 OPP: Tell us about your newest body of work Sporting Life. For the first time, you’ve dyed the horse hair in vibrant colors. . . not unnatural colors, but certainly unnatural to the animals being eulogized.

TCM: The latest body of work came about after finding bones from animals on my hikes. The bones, like the horse hair, have spiritual essences. I became obsessed with collecting them. A colleague of mine found a deer skull that I coveted, and she was generous enough to give it to me. This is the red white-tailed deer skull. I wanted to bring the two mediums together, but I wasn’t sure why or how. In the process of making my work I discover its context.

It is a journey I start without a preconceived idea about its end. I started to drill 3/16” homes into the antlers and inserting the horse hair, but once I was finished it felt rather gratuitous. Somehow they just keep reminding me of something until it finally hit me. I was doing something familiar, I was doing my own version of my my deceased father’s taxidermy hobby.

When I was young I saw my father as all powerful, like Dick Tracy. His power and presence was expressed even when he wasn’t around in our home through his taxidermy displays on our walls, shelves and coffee tables. Growing up I had a strange ambivalence with his trophy mounts in that they displayed the beauty of animals which I love, but at the same time the horror that they were killed at my fathers hands. When I realized I was partaking in this reverse taxidermy, I started putting the skulls on traditional mount forms. I was initially hesitant, even a little frightened about using such vibrant colors because it didn’t seem natural. Then I realized it expressed the unnaturalness of trophy mounts. It is pretty strange that humans as species have developed a display system that prepares animals to lifelike effect, but only after we have taken their lives away. 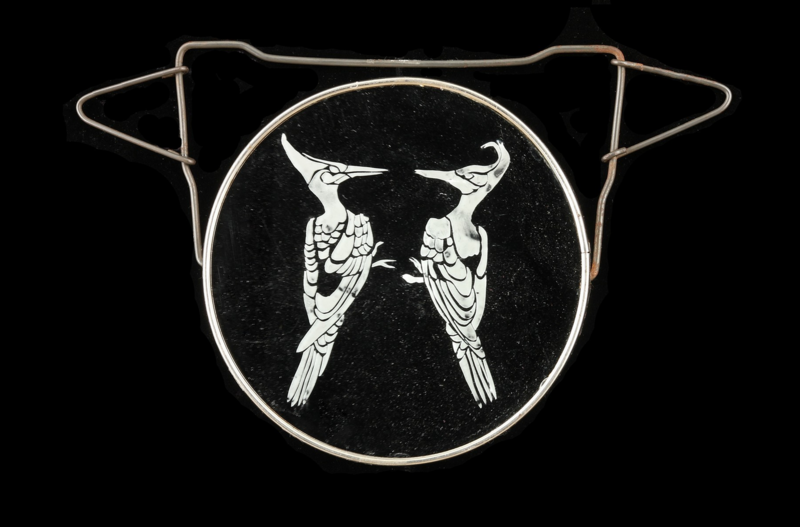 OPP: Reflections is a series of etched mirrors, featuring various endangered species. First off how, how the hell did you photograph those mirrors so well?

TCM: Photographing the mirrors, initially was a challenge. Fortunately, Don from Almac Camera in San Francisco figured this one out for me. I told him I needed the mirrors to be on a black background, this wasn’t a problem. However, the images obviously showed the camera in the shot and the animals, that I wanted to appear ghost like basically disappeared with studio lighting. So we experimented until Don came up with the idea of putting black velvet facing the mirrors and cutting a hole just large enough for his camera lens to peak through. He also shots the work off-centre, so even the lens isn’t visible in the final shot. What else can I say except I recommend Don at Almac Camera, great pricing as well. 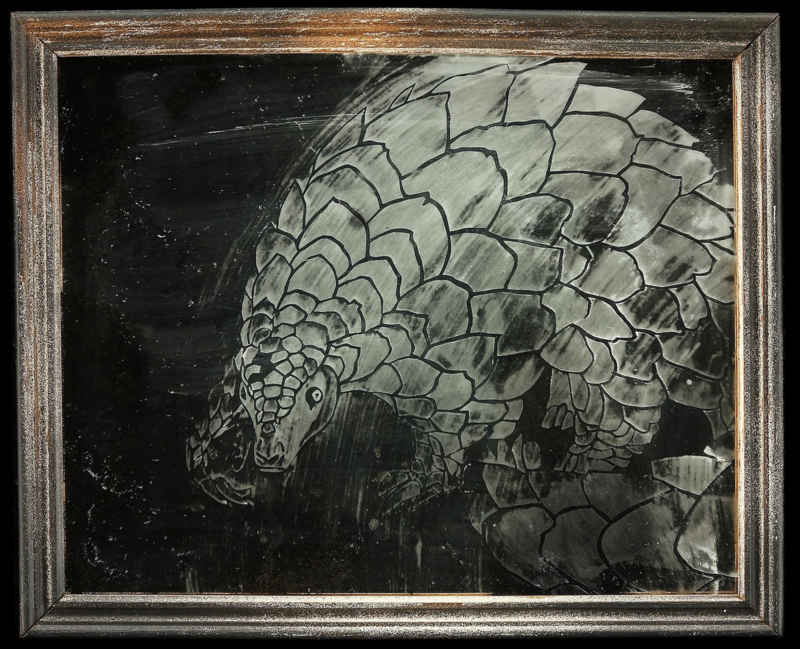 OPP: More importantly, do you identify as an animal activist/artist? How do you balance the practical concerns of animal activism and environmentalism with the aesthetic concerns of art-making? Are those concerns ever in conflict with one another?

TCM: Yes, I am an animal activist/ artist, a card carrying PETA member for years, not to mention a vegetarian. This is a tough question and one that I have given a lot of thought. Sometimes I ask myself, wouldn’t my time be better spent doing something directly beneficial, like working for the Sierra Club or Greenpeace or the National Resources Defense Council? I am not under any illusions that one person can change the world. But everyday I make small, informed choices and decisions based on the underlying ethical premise of animal/environmental concerns. I have also learned that you have to be true to yourself and have faith in the power of art. I believe we are all blessed or cursed with who we are intrinsically and with that comes a responsibility. I believe art-making allows me to evolve, share, explore, express and record in a way that traditional activism does not. My concerns, thoughts, dreams and fears are personified in an artifact that can be shared as a aesthetic experience which is different from other activist experiences. 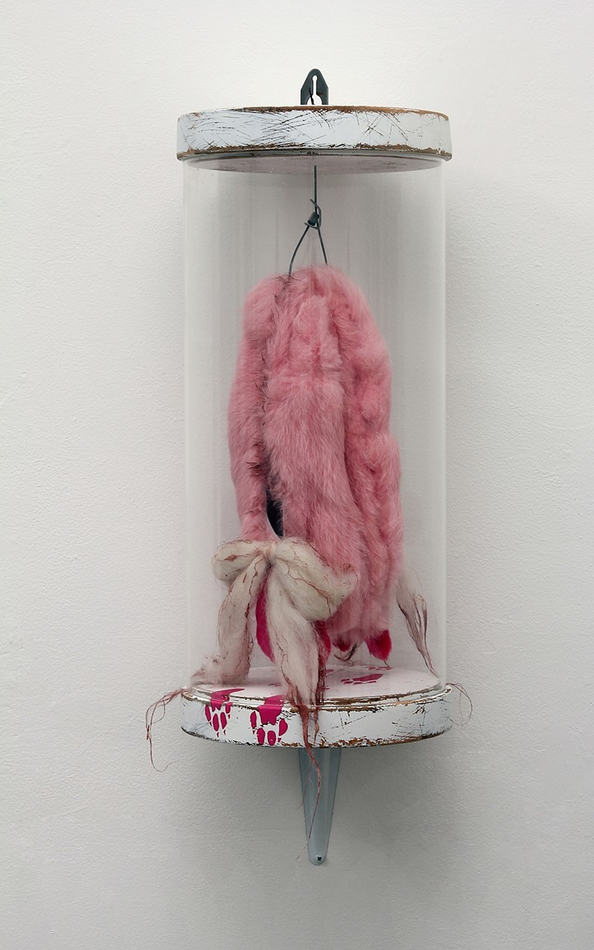 OPP: You’ve written that your work “is inspired by the Biophilia hypothesis, a term coined by E.O. Wilson which states that humans as a species have a universal love for the natural world.” If that’s true, why do you think it is so easy for 21st century humans to trash the planet and ignore the effects of their behavior on the surrounding world?

TCM: As a species, we have a tendency to be chauvinistic, narcissistic and dogmatic. We also do whatever comes easiest. I am not saying all humans are like this, but we do have a tendency to see the world only through our eyes and only with our own personal gains at the forefront of our reality. However, humans as a species also possess the capacity to change their behavior in drastic ways, more so than any other species on the planet. So, there is always hope. 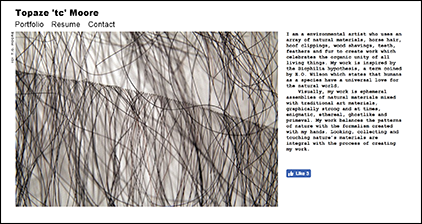 Featured Artist Interviews are conducted by Chicago-based artist Stacia Yeapanis. When she’s not writing for OPP, Stacia explores the relationship between repetition, desire and impermanence in cross-stitch embroideries, remix video, collage and impermanent installations. She is an Adjunct Assistant Professor in the Department of Fiber and Material Studies at The School of the Art Institute of Chicago, where received her MFA in 2006, and was a 2011-2012 Artist-in-Residence at BOLT in Chicago. Her solo exhibitions include shows at Siena Heights University (2013), Heaven Gallery (2014) and the Annex Gallery at Lillstreet Art Center (2014) and Witness, an evolving, durational installation at The Stolbun Collection (Chicago 2017), that could only be viewed via a live broadcast through a Nestcam. Now that the installation is complete, you can watch it via time lapse. Her upcoming solo show Sacred Secular will open in August 2017 at Indianapolis Art Center.