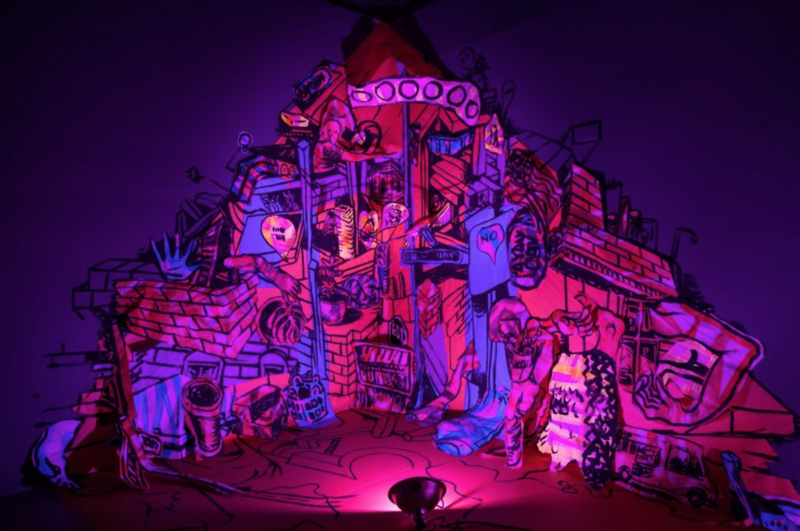 AMANDA BURNHAM's immersive, collage installations are dense with vernacular signage, brick walls and and trash cans. She pieces hundreds of gestural drawings of the surrounding city together, deliberately confusing three-dimensional space.  Instead of a realistic rendering of what a city looks like, she captures the frenetic energy of city architecture. Amanda earned her BA in Visual and Environmental Studies, at  Harvard University and her MFA in Painting and Printmaking at Yale University. Her long and varied exhibition record includes recent solo shows at University of Baltimore (2017), Elon University in North Carolina (2017), Arlington Art Center in Virginia (2016) and Dittmar Gallery at Northwestern University in Chicago (2014). Her work is included in the permanent collections of National Museum of Women in the Arts (Washington, DC) and the New York Public Library, as well as various private collections. Amanda just completed the Antenna Projects Artist Book Residency in New Orleans, and her solo show Amanda Burnham: In Situ will open at Gershman Gallery in Philadelphia on September 6. Amanda lives and works in Baltimore.

OtherPeoplesPixels: Your drawings and installations are all about cities. What’s your favorite city in the world?

Amanda Burnham: There are many cities that I love, but I'm going to go with Baltimore—not only because I live here, but because of its rich, diverse architectural vernacular, history, neighborhoods, and challenges. It inspired the direction of the installation work I have been making for the last decade. 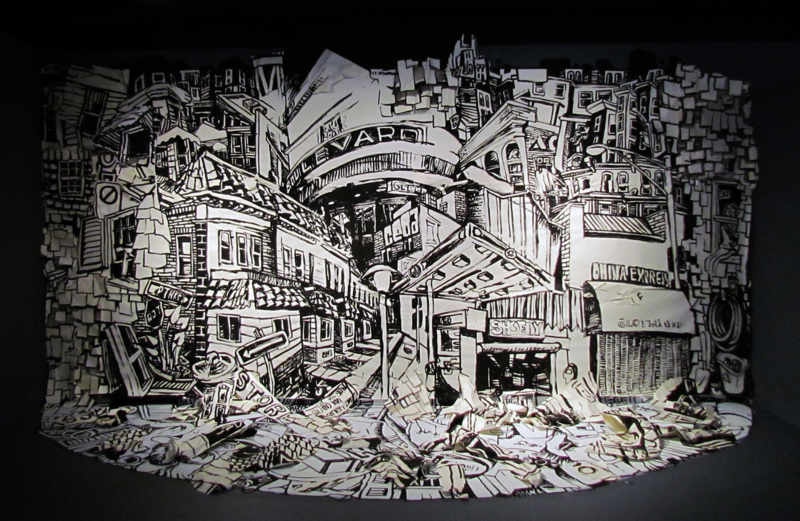 OPP: Tell us about the first installation?

AB: The first installation I made was for a show at the Julio Gallery at Loyola University in Baltimore in 2008. I'd been asked by the curator to show a group of the plein air cityscape drawings I'd been consumed with making at that point. I'd made hundreds of these small observational drawings of different sites during my first full year in the city. It started as a way of getting to know my new surroundings. I'd begun to feel the limitations of working at a small scale, from a fixed perspective. I increasingly felt that it wasn't the best way to capture the energy and activity of the city as I came to know it while sitting for many hours drawing it. I asked the curator if she would be open to me creating an installation for the show to accompany my drawings, and, thankfully she was. Looking at back at the resulting work (which, at the time I was very proud of, and which was very freeing for me), I'm struck by how minimal and reserved it is. But it changed the direction of my practice entirely. 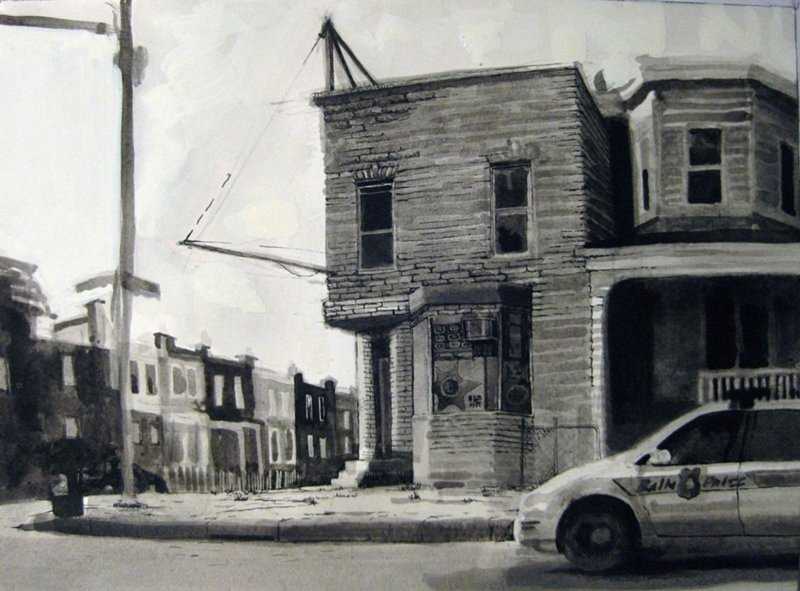 OPP: Earlier drawings are more realistic renderings of city landscapes, but it seems like you have been drawing in a more illustrative, comic style lately, especially in the installations. What led to this shift?

AB: Lately I've been interested in broadening the parameters of my work, so that it is less defined by a visual shorthand that references the built environments of urban spaces. I want it to be more inclusive of imagery that also suggests all the activity that occurs within those spaces. What really draws me to cities, anyway, is the events that happen when our living circumstances are not isolated and homogenous and the way they enable people to collect/collide/interact.

The somewhat comic stylistic approach of my drawings allows me to incorporate ideas which are less literal and strictly visually descriptive. I like that a comic style, given its bold, graphic qualities, allows me to formally weave together imagery from a lot of really different places—objective, inventive or visionary, metaphoric, etc. 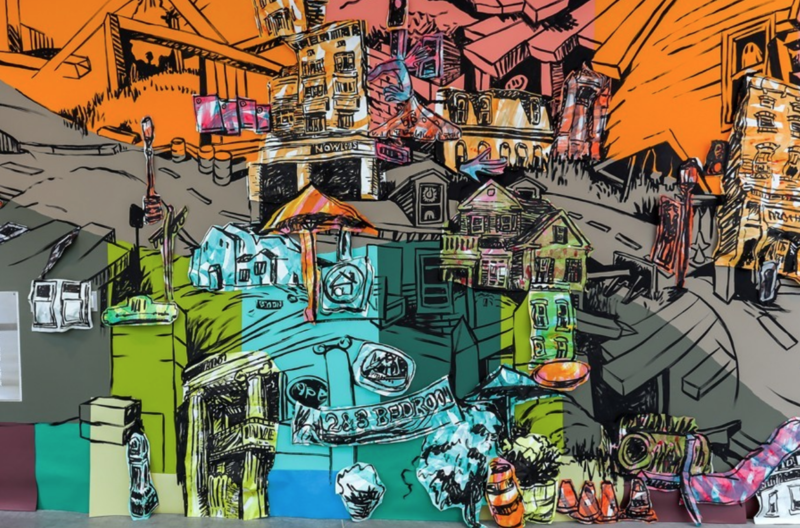 OPP: Tell us about the process of creating these drawing installations? Are they site-specific? What determines the imagery?

AB: They are always site-specific in the sense that they are constructed almost entirely within the space they will be shown, and are therefore sensitive to the physical peculiarities of whatever that space is. They are often site-specific in the sense that I choose to enfold imagery discovered in the surrounding area to some degree. I've done this in very subtle ways, and I've also built entire pieces that were meant to evoke a specific city (as with RFP in Baltimore).

I start by looking at the space and by collecting imagery from which to make drawings. I walk around the neighborhood, take pictures and make sketches. Using my sketchbook, I establish parameters for the piece, ideas I want to address or imagery I want to incorporate and roughly how I will engage the space. I sketch out broad compositional outlines for shape on the wall, where I want collage layers to be massed, palette, whether there will be sculptural components or embedded lighting.

I'll spend the weeks leading up to making a piece preparing raw materials for collage. I roll out drawing paper in my studio, prepare it with color (watered down acrylic, usually), and make hundreds of quick gestural drawings with black acrylic. When I put the piece together in the space, I take anywhere from a day or two to several weeks. Everything is orchestrated very extemporaneously within the parameters I've set. I use different widths of black or colored masking tape and light duty staples to attach pieces to the wall, and sometimes paint directly on the wall, as well.  The final pieces are the result of many layers of collage build up. 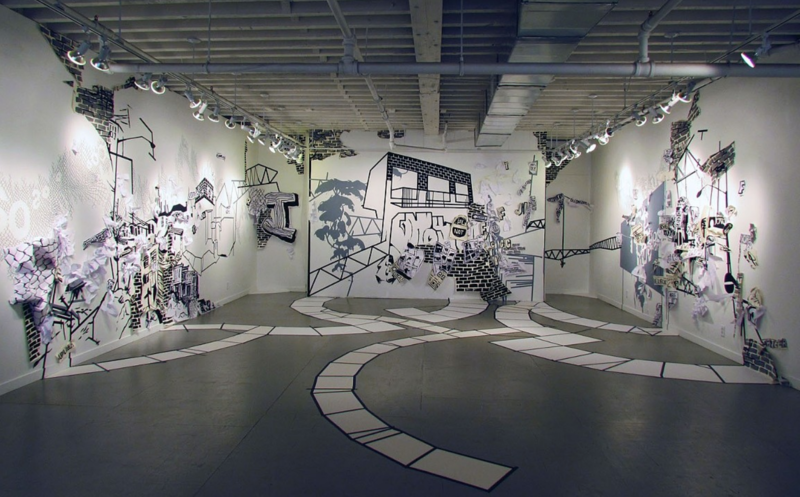 OPP: You mentioned RFP, which was a unique installation in that it involved audience participation. What does RFP stand for?

AB: RFP stands for Request for Proposals. Its a term commonly used in city planning for the development of a parcel of land. I wanted to evoke this common usage because Baltimore—like most older, formerly industrial cities—has a fraught and lengthy history with issues surrounding planning. There are neighborhoods with legacies of exclusion borne by restrictive covenants and red-lining, division and isolation of formerly thriving neighborhoods via poorly considered large scale building projects (like highways), disinvestment and civic neglect of neighborhoods (frequently along racial lines), gentrification that prices long term residents out of their homes and established communities. A commonality to all these dynamics is how bound up they are in bureaucratic and political structures that can seem far from the reach or control of the individual citizens that they impact.

RFP was motivated by an idealistic desire to propose a city democratically shaped in every way by the people who actually live there; it was a request for proposals from the residents of Baltimore. 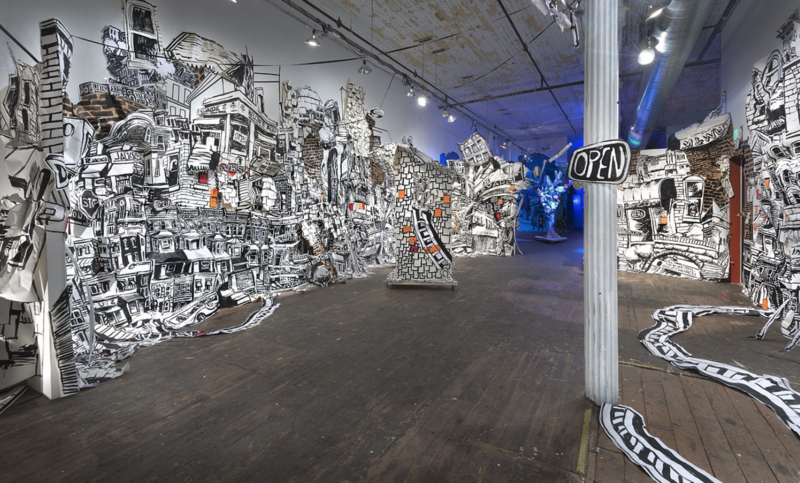 OPP: How did the installation evolve?

AB: The piece as it opened on day one was like my other work in its use of paper and collage installation. All of the drawings were recognizably Baltimore; different neighborhoods were woven together throughout the space, commingled without reference to literal geography.

I wanted the piece to feel very welcoming. The piece was orchestrated in a large ground floor former department store space with huge, plate glass windows in front. It was located on West Baltimore Street, an area of the city which a lot of different people traverse for a lot of different reasons every day. In addition to having numerous hand drawn OPEN signs (like the neon ones you see in bodegas) and a sandwich board inviting people in from the sidewalk, I designed the piece so that it would be maximally visible from outside. It stretched all the way to the front so there wasn't any apparent barrier to entry (like the imposing desks that sit at the front of most galleries). All of this was meant to be a reflective backdrop, and the centerpiece of the installation was a big table full of drawing supplies and some loose prompts inviting thought about Baltimore: "I feel the most like I belong here when...", "This city needs...", "My neighborhood is..." etc.

Visitors were invited to add their writings and drawings to the existing backdrop. During the time the piece was up, more and more of these amassed, so that by the time it came down it was covered with hundreds of contributions, ranging from reminisces, to suggestions, to manifestos, to actual images altering the preexisting ones. 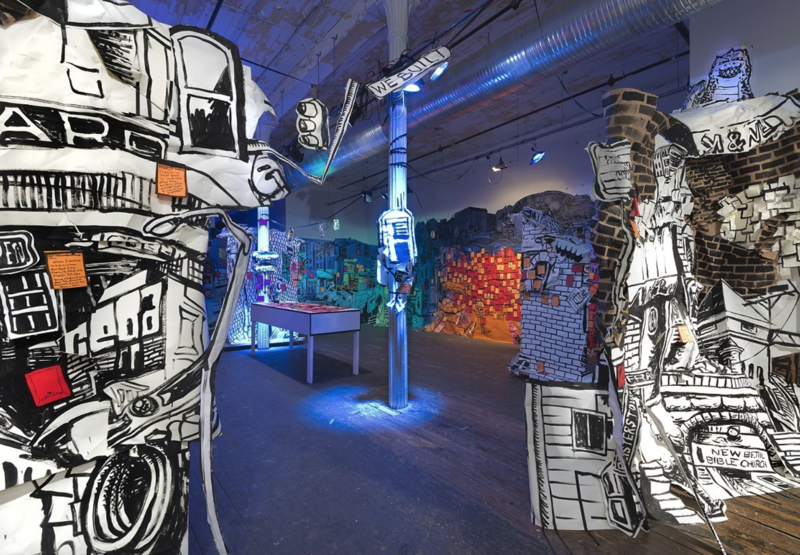 OPP: Was there anything frustrating about depending on the public to complete the work? What was satisfying about it?

AB: Not in this case. We had a large volume of visitors due to the visibility from the sidewalk and the high traffic in the area. The piece was set up so that it would be clear to someone that contributing was the idea without having to ask. The paper on the table was color keyed to the backdrop, in addition to the rolls of tape and drawing supplies were visual cues, and this seemed to work (though I was on hand every day to greet people and answer questions if they had them, too.) There was some initial anxiety that it wouldn't work, or that I'd have to edit contributions (i.e. if someone posted something abusive or hateful), but wonderfully, there was no need.

Since I was there everyday, I met a lot of people over the course of the piece's life. As satisfying as it was to see (and be surprised by!) the range of physical additions to the piece, the most satisfying was that the piece became a way for me and other visitors to talk to people we might never have met otherwise. 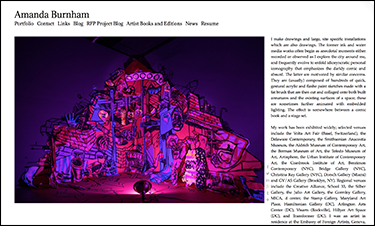