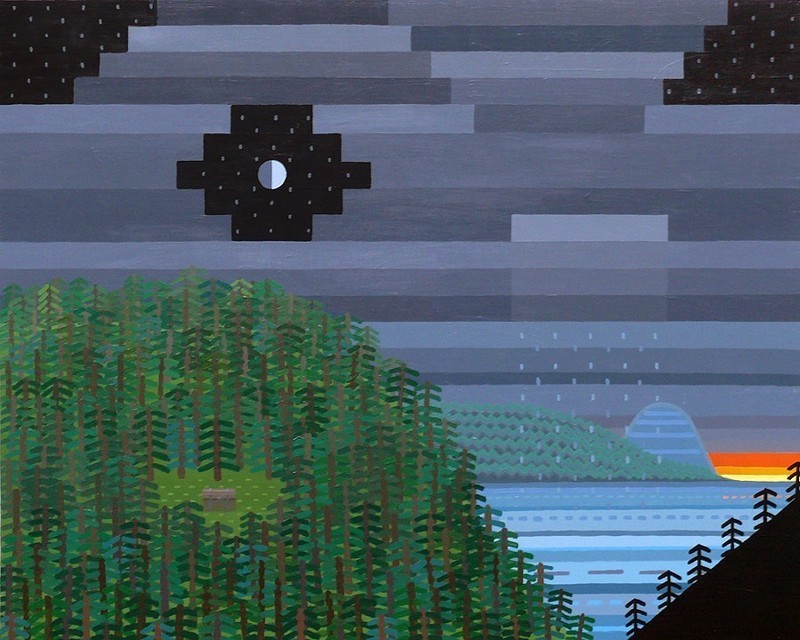 CABLE GRIFFITH creates and explores fictional worlds in landscape paintings informed by the aesthetics of early video games, visually triggering the nostalgia of a generation. Fictional worlds, of course, are simply analogs for the world we live in, and these colorful, cartoony landscapes use formal reduction to hint at the expansive complexity of imagining what might still be left to discover. Cable earned his BFA in Painting from Boston University in 1997 and his MFA in Painting from the University of Washington in 2002. His numerous solo exhibitions include Up, Up, Down, Down, Left, Right, Left, Right, B, A, Start (2013) at Kittredge Gallery, University of Puget Sound (Tacoma, Washington), FlotsamJetsamLagan: The Oneness (2013) at SOIL Gallery (Seattle), Domestic Landscapes (2014) at two shelves (Seattle). The forthcoming Sightings will open in December 2015 at G. Gibson Gallery (Seattle). Cable is a faculty member at Cornish College of the Arts in Seattle, Washington, where he lives and works.

OtherPeoplesPixels: The earliest work on your website (2006-2008) is characterized by intense, accumulative mark-making. Works like Orange Jungle (2008), Green Canopy (2007) and Vertical Shear (2007) hover between abstraction and chaotic environments. Did you consciously shift towards the more designed, organized landscapes that came later or was this an organic evolution in your practice?

Cable Griffith: That transition was definitely organic and happened gradually over several years through several bodies of work. Looking back at the shift, I can try to make sense of it now. The earlier work was a record of me arriving at an invented place, mark by mark, with little-to-no pre-defined plan. I still rely heavily on improvisation, but in 2009, I made World One Overview, my first “map” painting, which attempted to conceive many separate locations into a more fully connected world. Using the maps, I began to locate myself in a more intentional way inside that world and the continuing description of it. Now, some paintings take a vantage point from far above, and some are at ground level. In short, I think that as the invented world became clearer in my mind, aspects of my process became more deliberate. 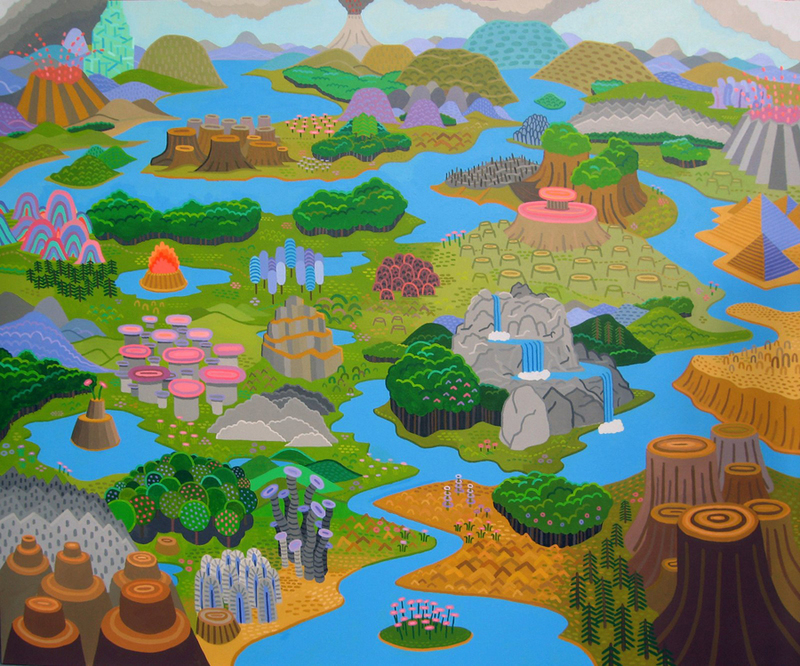 OPP: In your most recent work, I see clear influences from both the aesthetics of early video games—specifically, Nintendo and Atari—and Modernist painting. Do the discourses of these seemingly disparate fields share territory? What are the connections for you?

CG: I grew up with Atari and Nintendo and have played video games ever since. More recently, I’ve realized that my understanding of landscape has been heavily informed by video games’ systematic and formulaic way of reducing the complexity of natural environments. This influenced me long before I knew what Modernism was. I’m attracted to the reductive qualities of both and their potential as language. Once I identified that my work was influenced by the history of virtual space as much as painted space, I set out to explore that territory.

One of the crossovers is how reductive form is used in both modernist painting and early video games. Many modernist painters were trying to reduce form intentionally towards a simple and efficient result. They might say they were trying to capture the “essence” of something. In early video games, however, the reduction wasn’t intentional, but rather a limitation of the technology of the time. Because of the limited colors, chunky resolution and minimal memory, the game designers needed to be very inventive with how they maximized the given set of parameters. Some of my favorite games—Zelda and Mario Bros., for example—felt like expansive worlds, when in fact they were entirely made up of only a few variants. In many ways, I’m trying to do the same thing by limiting my parameters while trying to built something that feels limitless.

OPP: What can games do that paintings cannot, and vice versa?

CG: Some games sell millions of copies? And some paintings make people travel thousands of miles to see them in person. Honestly, I’m having a hard time with this question. There are many painfully obvious answers one could come up with that separate the two. But the more I think about it and consider the vast range of things that people have done already and the unlimited potential of both fields, I’ll go out on a limb and say that hypothetically, there’s nothing one can do that the other can’t. 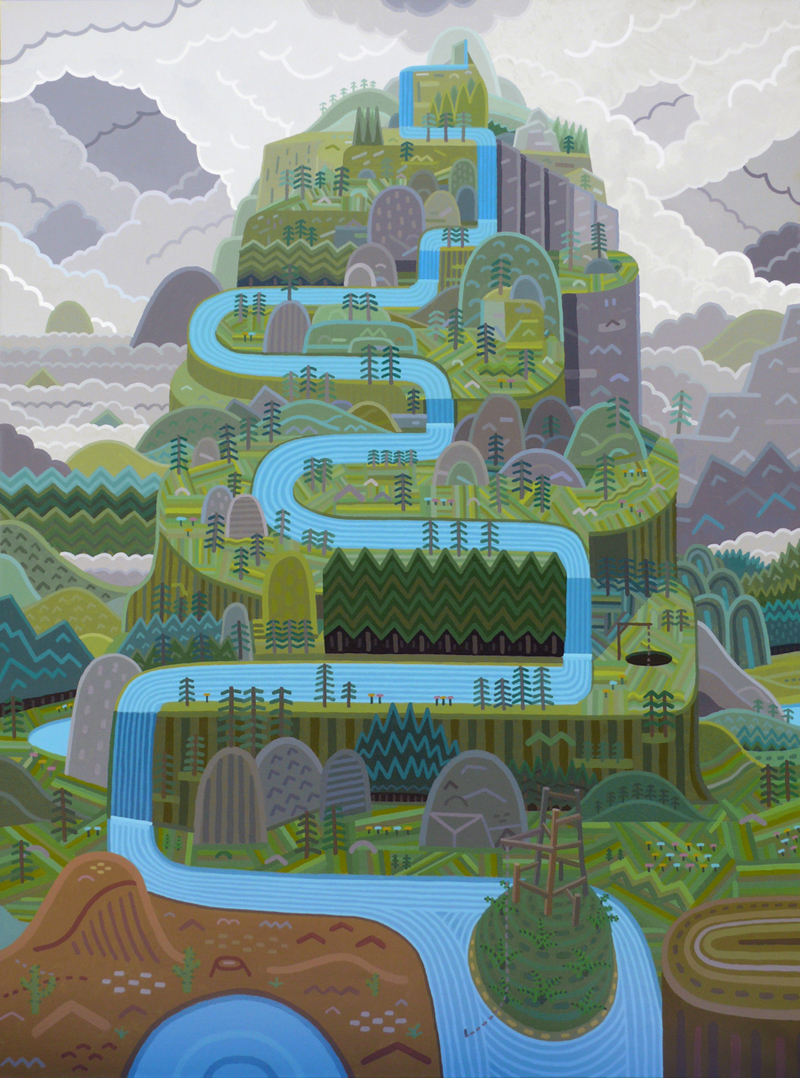 OPP: Tell us about your collaborations with programmer/artist Brent Watanabe.

CG: In 2012, I was working on a large painting installation Side-scroll World One for my exhibition Up, Up, Down, Down, Left, Right, Left, Right, B, A, Start. It was my first body of work that explored the crossover of video game space through painting. Side-scroll was composed of over 20 connected/sprawling paintings and referenced the classic platformer video game convention. I posted an image of the paintings in progress on Facebook, and Brent made a comment about mapping a game projection on top of the paintings. I really wanted to see that happen, so we started talking seriously about it.

Although we didn’t use the Side-scroll installation at the time, we got together and came up with a game and world concept, then went our separate ways to work. Brent designed the game system, and I developed the background environment. The final piece was called for(){}; and was a playable triptych, very loosely based on the Hieronymus Bosch’s Garden of Earthly Delights. This year, we revisited the playable painting/video game collaboration on the original Side-scroll World One installation and the game used much more of the wall space in between and around the paintings, including various objects in the room. Both games shared a lack of any clear objective. And this was intentional. As the "player" you could explore the world freely, interact with the environment, try to figure out various cause and effect relationships, consume and leave waste behind. Kind of like humans on earth! We’re continuing to develop these ideas and are looking forward to a new collaborative project in 2016.

OPP: Recent paintings from 2014—Desert, Landguage I, and This is the place - Be prepared to defend yourself, among others—read like pictographs, hieroglyphics or maps key symbols, while still maintaining a clear connection to both video games and landscape. Are these new works landscapes or texts?

CG: They’re both. To me, all landscape paintings are texts. Of course, the more we know about a painting, the more it tells us. And the perspective of time gives us a much different reading on paintings now than 300 years ago. Or even 20 years ago. Everything about a painting is part of its story, down to the pigments and tools, the artist’s social or political relationships, patrons, and trends of the time. Generally, I’ve found that the more you look, the more you find. Of course, the artist’s intention is important, but that’s not where meaning always resides.

The code paintings are, in some way, are a further reduction of natural forms from my map paintings. But I’ve become increasingly interested in the domestic function of paintings. Generally, domestic space is where paintings eventually spend their time. Paintings have a very strong connection and history with living spaces. And yet, artists like to think of their work in a clean, white, empty gallery space. I certainly do. The code paintings and  “tapestries” (painted on loose, raw canvas) are explorations of landscape with a relationship to a domestic site in mind, referencing wall paper and textile patterns. 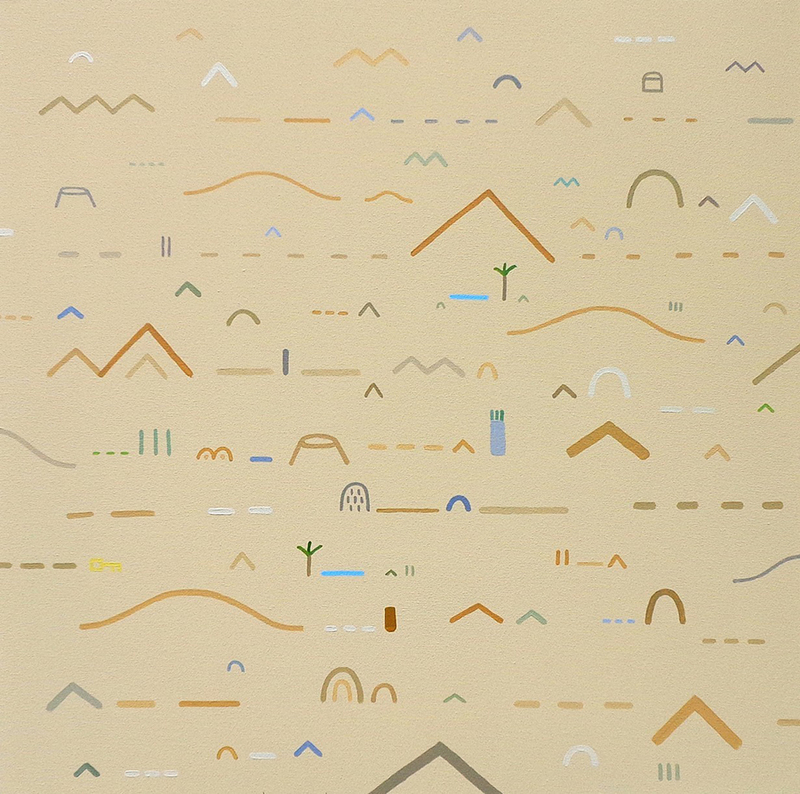 OPP: Tell us about your upcoming solo show Sightings. This body of work takes an entirely new inspiration as its jumping off point.

CG: The Sightings series was conceived in conversation with the history of landscape painting, notions of the Sublime and the role of painting as documentation. The paintings are all inspired by reports of various unexplained phenomenon in contemporary culture. I’m hoping to evoke a similar sense of wonder and awe as the Romantic landscape paintings of the 19th Century, but in an updated way.  Artists like Thomas Cole and Casper David Friedrich depicted a magnificent and untameable world that suggested the insignificance of man in the face of overwhelming natural forces. Today, much of that landscape has been conquered and covered by a civilization whose aspirations now aim beyond the terrestrial. In a world where anything seems possible, perhaps we give the most pause to things that seem impossible.

Many of the paintings are based off of actual UFO reports in the Pacific Northwest. I use part of the witness’s actual description as the title and research the location and time of the sighting as a starting point for the painting. I don’t take a position on the validity of any of the claims. I’m mainly interested in the sighting phenomenon overall. There are images of several studies of the series on the G. Gibson Gallery's website, but the full show will open in December 2015. 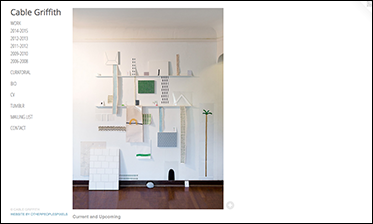