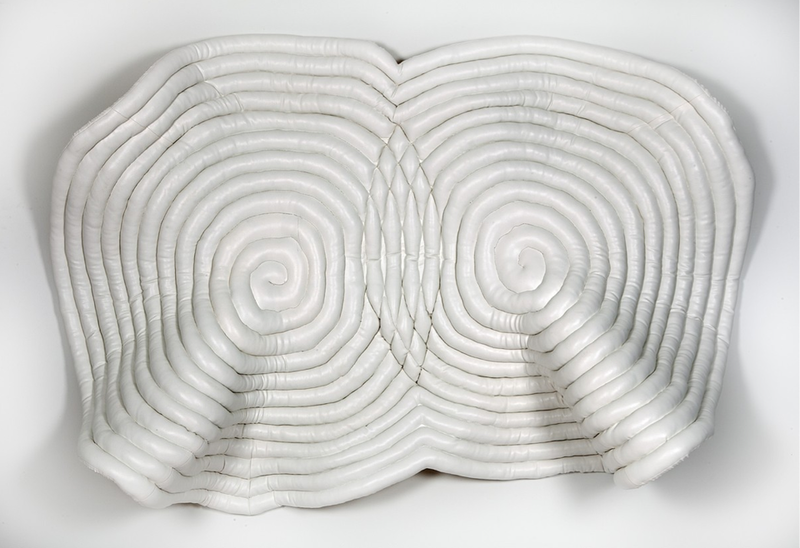 Multimedia artist STEPHANIE PATTON uses humor, word play and an attention to materiality to address the universal human experiences of suffering, comfort and healing in her quilted sculptures, videos and installations. Stephanie is represented by Arthur Roger Gallery and is a member of the artist-run collective The Front, both in New Orleans. Her numerous solo exhibitions include Private Practice (2013) and Diffuse (2010) at Arthur Roger Gallery, as well as Upkeep (2012) and General Hospital (2011) at The Front. In 2013, her work was included in group exhibitions at the Frederick R. Weisman Museum of Art, Pepperdine University (Malibu, California), Biggin Gallery, Auburn University (Auburn, Alabama), Vox Populi (Philadelphia) and Acadiana Center for the Arts (Lafayette, Louisiana). Stephanie lives and works in Lafayette, Louisiana.

OtherPeoplesPixels: Could you talk about the relationship between pain, healing and humor in your work?

Stephanie Patton: Healing takes many forms, both physically and emotionally. Painful experiences can lead to creative expression and are often the impetus behind some of the most engaging work. What source material would a stand-up comedian have if it weren't for strange life experiences and painful moments?

I believe the same is true for many visual artists, musicians and performers. There have been many instances in my own work when I was drawn to an idea, material or image for no particular reason. Then later the relevance became clear to me. One example is Life Saver. In 2006, while in residency at the Vermont Studio Center, I kept envisioning a grid-like pattern of multiple inner tubes covered in white vinyl lying on the floor. I wasn't quite sure why this image kept entering my mind. I later realized that this was in fact my own reaction to Hurricane Katrina and the devastation that it had caused here in Louisiana. This idea was not completely resolved until 2008, when I decided to suspend the inner tubes from the ceiling instead of placing them on the floor. Instead of white vinyl, I used mattress quilting—a material that I continue to use today—for the first time because of its multiple references.

I have heard that an artist has one or two great ideas in a lifetime, and the core of my work is based on striving to empathize with and understand those afflicted with physical and mental health issues. Certainly, we are in a day and age in which mental health is a growing concern, and it is luckily not as taboo as it was in the past. I am particularly interested in how physical ailments often manifest as extreme stress and/or traumatic emotional states and vice versa. I strive to illustrate connections between physical and emotional states in my work. This is especially the case in the white vinyl pieces that I have made in recent years. 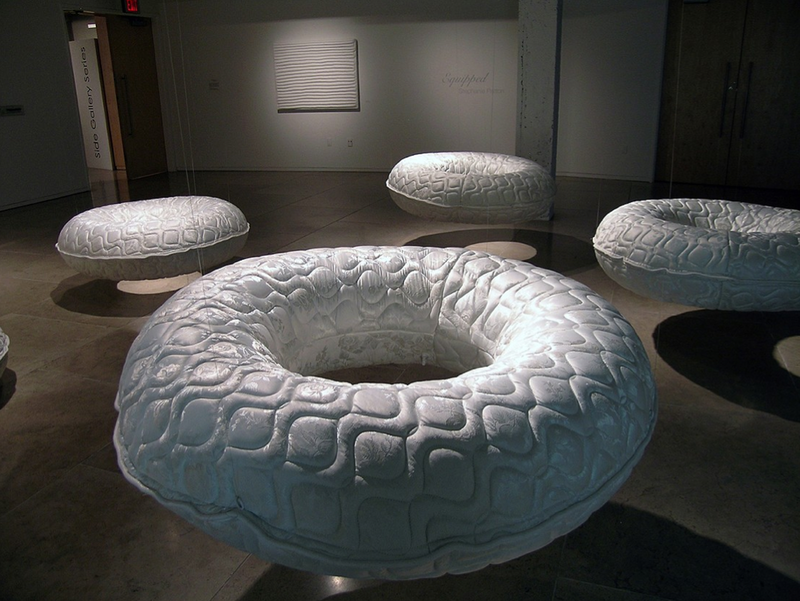 OPP: The patterns in pieces like Strength, Valor and Meeting in your 2013 exhibition Private Practice evoke the raked patterns in Zen gardens, and I see a connection between the handwork of quilting and the contemplative state associated with the Zen garden. Is this a visual reference for you?

SP: Zen gardens were not a direct reference for me, but I see the visual and conceptual connection. In researching visual symbols relating to the emotions, I was very drawn to the Adinkra symbols of West Africa. These symbols are very simple, yet visually powerful and could easily translate into the material of vinyl that I continue to explore. The emotions they represent are conceptually appropriate for what I was trying to convey in Private Practice. Some of the white vinyl pieces such as Strength and Valor were taken directly from the Adrinkra symbols.

OPP: I imagine from the shapes of these pieces that quilting vinyl is unwieldy and difficult. What is it like to work with this material? When did you make your first quilted piece?

SP: Yes, working with vinyl is quite a challenge. I have often described it as "wrestling alligators"!  Years ago, I first used quilted fabric pieces for various installations. Satin was my fabric of choice. I made quilted satin walls for my 1996 thesis show while I was a while a graduate student at The School of the Art Institute of Chicago. These quilted walls lined a lingerie showroom which showcased fantasy lingerie products such as the Heart Filter™ and the Anxiety Guard™ by Renella®. In 2004, I used quilted satin to reconstruct the interior of a minivan for a project entitled Custom Built. Although I was still very interested in the idea of padding or cushions, I later discovered that vinyl was a more appropriate choice both in terms of its physical properties and its conceptual impact. Certainly the idea of padded walls comes into play. For me, these pieces allude to protective environments whether that is a reference to mental health and/or any soft, protective, physically-comforting space. My first stuffed, white vinyl piece, Protection (2008), hung flat against the wall. In 2011, I made Center Piece, which was more of a relief sculpture that pulled away from the wall. Today they continue to take various forms. I am interested in pushing the materials in ways that I have not yet encountered. 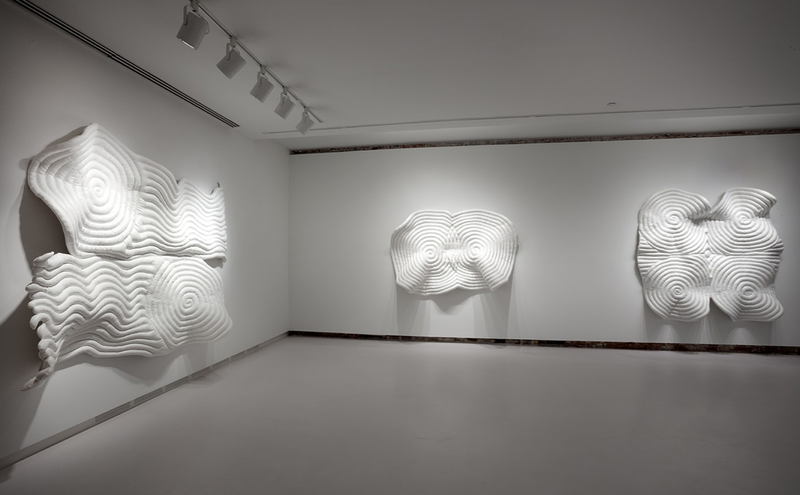 OPP: Your videos Conquer (2013), Heal (2011) and Diffuse (2008) are embodied metaphors for emotional experiences that use language as a jumping off point. I also see a relationship to the trajectory of feminist performance art. Are you influenced by pioneers like Martha Rosler, Janine Antoni, Hannah Wilke and Marina Abromovic? If not, what has influenced you?

SP: Although I highly regard all of these amazing pioneers and their great contributions to performance art, I cannot say that I was directly influenced by them. I consider my main influences to have come form various musical personas such as Dolly Parton and Loretta Lynn. I've also been inspired by female comedic players such as former members of the cast of Saturday Night Live including Gilda Radner, Molly Shannon, Rachel Dratch, Tina Fey and Amy Poeler. I LOVE the SNL men as well! I've been making videos since 1995 and had the opportunity to study various types of performance in NYC between 2000-2002 at the Upright Citizens Brigade, Gothum Writers Workshop and the New School. This amazing experience has informed my more recent video work.

Funny enough, another major source of inspiration for me was actually the mail order catalogs that my grandmother kept next to her recliner, such as Old Pueblo Traders and Dr. Leonard's. I grew up looking at these catalogs when I was bored as a child visiting her in the country. The gadgets in these catalogs inspired some of my earliest work, as in the products that I made for the lingerie showroom that I mentioned. They also led me to the idioms that I have used in my video work including "when life gives you lemons, make lemonade" and "walking on eggshells.”

OPP: Do you have a favorite piece of your own work? Is it the same as the piece you consider to be most successful?

SP: That’s a hard one! I am very attached to the white vinyl pieces at the moment. One of my favorites is Center Piece because of its visual simplicity and the discoveries that it has led me to. This piece was in fact the springboard for all of the white vinyl pieces that I am continuing to make today. A few of my other favorites are my video Diffuse and the sculptural works, Life Saver and Bronze SAS Shoes. Although it is hard for me to judge which of these would be representations of my best work, I do feel that Diffuse is one of my most successful videos. The others that I mentioned are successful to me in the sense that they are all very true to my visual and conceptual intent.

OPP: You mentioned Renella as part of your MFA work. She’s your alter ego, a country singer, who, when asked in an interview what was inspiring about her trip to the Palace of Versailles, responded, "It's all about being fancy." She doesn't appear anywhere on your artist website, but I discovered her on your Vimeo page and found that she has her own Facebook page. It looks like she's had numerous public appearances in and out of the art world. Does she still perform? How does this character relate to your more recent sculptural and video work?

SP: Renella is actually taking a well-deserved nap at the moment. . . she’s a character that I began to develop in 1992 when I did a performance of a fictitious wedding with fellow artist, Jack Rivas. I needed a name for the bride and Renella Rose Champagne was born! She married Junior Rivas on April 17, 1992. This was a huge collaboration for me. It involved an eight-month engagement, many traditional parties and bridal events along the way, and the wedding itself was attended by 150 guests. I have pursued several major projects and have done many performances in and out of the art world as this character including the lingerie showroom I mentioned.

In 2005, I chose to devote my creative energy to my multidisciplinary studio work. Although Renella is not visually present in the current work, there is a sense of her ongoing spirit throughout my sculptural and video work. I am certain that she will find her way more directly into my work again someday. Renella has a way of making an appearance when least expected! 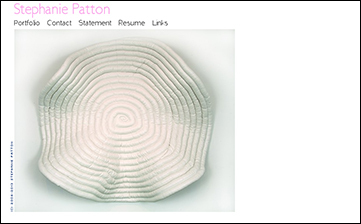 Featured Artist Interviews are conducted by Chicago-based interdisciplinary artist Stacia Yeapanis. When she’s not writing for OPP, Stacia explores the relationship between repetition, desire and impermanence in her cross-stitch embroideries, remix video and collage installations. She is an instructor in the Department of Fiber and Material Studies at The School of the Art Institute of Chicago, where received her MFA in 2006, and was a 2012-2013 Mentor-in-Residence at BOLT in Chicago. Her solo exhibition I Still Haven’t Found What I’m Looking For at Klemm Gallery, Siena Heights University (Adrian, Michigan) just closed, and she is currently preparing for another solo exhibition titled Everything You Need is Already Here (Heaven Gallery, Chicago) in January 2014.