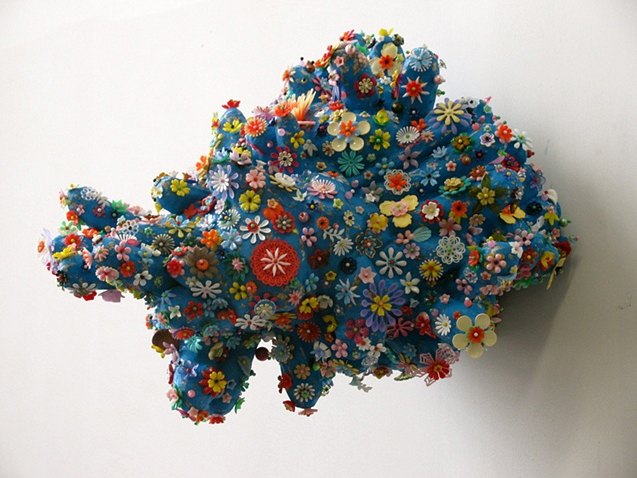 OtherPeoplesPixels: As an interdisciplinary artist working in sculpture, installation, and painting, with an emphasis on color, form, and materiality, your body of work is varied and mostly abstract. What are some common themes that come up again and again for you?

Sam Jaffe: First of all, I'm probably a hoarder. Luckily, I'm also obsessively organized. I think, as with many artists, my upbringing, early experiences, and passions really do seem to be relevant here. Within my work, I have owned much of the physical material from which I draw inspiration since childhood. I started many of my collections (bits of lace, seashells, kitschy figurines, beads, stickers, miniatures, handmade potholders and blankets, vintage clothing, sea glass, Lisa Frank everything, foreign coins, holograms, colored light bulbs, fake eyelashes, children's books, yarn, plastic flowers to name a few) before I can remember how or why they started. Many of my works begin with a certain personal visual delight in these collections. My art is all about combinations and amalgamations of details; it could be seen as an over-romanticizing of the commonplace.

OtherPeoplesPixels: Could you talk a bit more in depth about the materials you use?

Sam Jaffe: Most of the materials that I end up using for the work are from popular culture and are mass-produced. I'm searching out this latent possibility in things that are part of the everyday. I create by taking these items and placing them next to things that have been painstakingly handmade. I hope to question what is craft and what is commodity. I want there to be prickly situations where nature and culture come to some sort of outlandish understanding. That which was thought to be animal, or human, in some way morphs into something horribly artificial. There are also a lot of accumulations of parts—a kind of overgrowth or bad, mutated evolution, and I think that may suggest some contemporary cultural parallels that are very problematic.

Materials for me are not just formal elements, nor are they ever neutral. They stand for a vast array of personal and cultural frameworks. They shape our senses of self. Above all, the work is about surrendering to materials and the fetishistic nature of material culture. In many ways, I like to think that this IS the primary content of my recent work. It's all about strange ways of using materials and allowing the form to be a demonstration, extension, and exploitation of the possibilities of the materials. 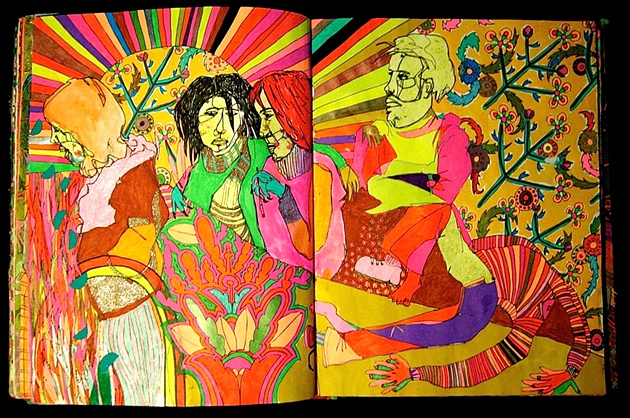 OtherPeoplesPixels: You have chosen to include documentation of your sketchbook on your website. Many sketchbooks compliment finished pieces by showing the working process of an artist with notes and ideas for further development, but yours seems denser and closer to a work in and of itself than others I have seen. What is the role of the sketchbook in your practice?

Sam Jaffe: I rarely sketch, unless there is a concrete logistical task like taking measurements or a mathematical problem raised by a work. Sketching for me is almost pointless, because I start with a vague idea and end up with something completely different nearly every time. I just start working without much of a plan and the pieces evolve. I spend a lot of time looking at what's there, be it a pile of fabric or a nearly completed installation, and then I make my next move... one step at a time. The sketchbooks really function more like portable studios: just something to work on while traveling or at home watching TV. 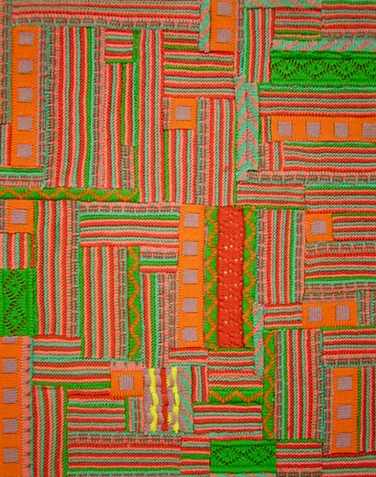 OtherPeoplesPixels: Many pieces, such as Physical World (2009), Painting Sweater (2009) and Agnes (2011), reference painting visually without being painting. How does the history of painting as a discipline relate to your work in other media?

Sam Jaffe: Well, I'm from Wisconsin. I was exposed to some contemporary art as a kid, and certainly came from a family dedicated to cultivating my artistic interests. But, up until I was well into my BFA, art meant modern, Western painting. Sculpture would have definitely involved a hammer and chisel, or worse, power-tools...scary! I didn't go to Chelsea until I was in my early 20s and I doubt I could have named a single, contemporary, female artist at that time. Looking back, I think this painting baggage thing has been hard for me to shake, so I embrace it. As you point out, even as I have moved away from the medium, painting, painting rhetoric, painters, and painting history have really still remained salient concerns of mine.

OtherPeoplesPixels: Are there any contemporary painters that influence your work now? If not painters, what artists do influence how you think about sculpture?

Sam Jaffe: I'm really interested in all kinds of art and also design and fashion. I don't tend to spend too much time categorizing or discriminating based on media. I am particularly drawn to artists that activate and take advantage of spaces in unique ways like Olafur Eliasson, Gordon Matta Clark, and Dan Flavin. I had the opportunity to see Flavin's rooms of light at The Villa Panza in Italy several years ago, and I think that it is one of the main reasons I became excited about installation in the first place. I also tend to look at artists with similar material and aesthetic interests to mine like David Altmejd, Mike Kelly, Folkert De-Jong, Yayoi Kusama, Jim Drain, Nick Cave, and Louise Bourgeois.

OtherPeoplesPixels: What role does humor play in your work?

Sam Jaffe: Humor is often characterized by some kind of sudden shift in perspective, a convergence of two conflicting frames of reference. It is something we might use as a coping mechanism when we are experiencing painful, stressful, embarrassing, or awkward emotions. My goal in using humor is to energize the viewer with the playful formality in my work. But when s/he gets up close, I want there to be an insecurity as to what s/he is seeing. Do the exaggeratedly bright colors and overstuffed, spongy forms begin to turn toxic and sinister when one turns away? Carnivals, cartoons, parades, and fairy tales can be confusingly humorous and scary settings. Tough messages can be buried in softness. 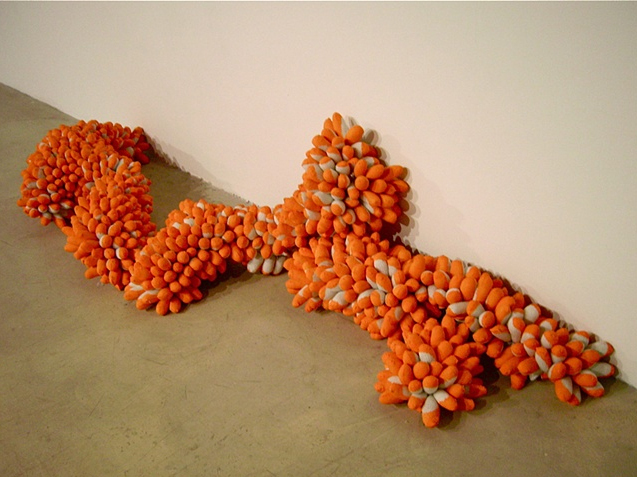 OtherPeoplesPixels: Some Pig (2009), Nobody Puts Baby In A Corner (2009), and Blue Meanie (2009) are just a few titles that make reference to popular movies, books and music. What is the role of these cultural references in the meaning of your work?

Sam Jaffe: The cultural references serve mainly as complicating agents and informers that push up against a prudish aspect of formalism that seems to interest me. I visualize the concept of "pop culture" as an expansive sea of data that can be grabbed at in the same way one would make up a mix tape. I pose the question, how can we make narratives out of our contemporary, American culture, which is already such an irreverent crossbreed? I am hugely influenced by both popular and avant-garde film, literature, and fashion. So, yes there are references to films like Dirty Dancing, but I also reference films by Kenneth Anger and Alejandro Jodorowski, both of whom make work that would be categorized as somewhat experimental or underground. My work is particularly American and Post-Modern in that I sometimes brazenly de-contextualize and take possession of whatever forms seem to create something interesting. I think artists have to be opportunistic yet selective when it comes to cultural input. 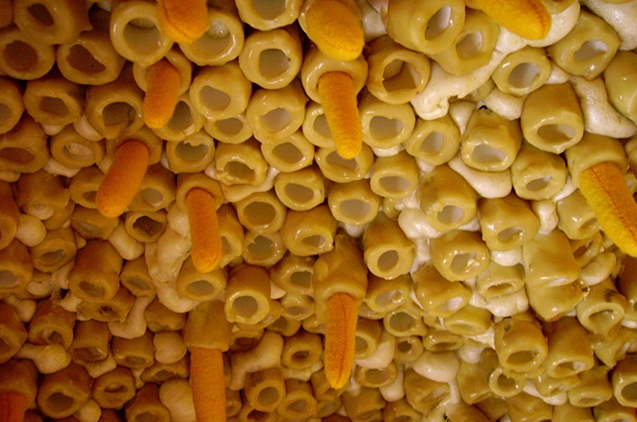 OtherPeoplesPixels: Your sculptures and installations range from clean and uniform, as in Some Pig (2009), to chaotic and filthy, as in Warm and Scuzzy (2009) or the untitled sculptures from 2009, which use insulating foam. Could you talk a little about these qualities in your work?

Sam Jaffe: Rather than using the terms "clean" and "dirty," I would describe the dichotomy in my work as modern/synthetic vs. natural/biological. Modernity represents a utopian epoch of efficient, triumphant, and evangelical conquest over those elements of culture that are not consistent with the logic of a particular, shrewd, and masculine world order: a system set up to control the primal, erotic, and, of course, feminine impulses that stand in the way of "true progress." In some of my work, I hope to complicate and undermine this order by creating works that mimic a modernist style or trope, but then at the same time are visually or sensually rich and tactile or ornamented. Nobody Puts Baby In A Corner, for example, is essentially a monochrome, but it's made from neon pink, knit pieces; knitting being a tradition that communicates with the human body in feminine, emotional and interactive ways. In a piece like Warm and Scuzzy, the form is meant to refer to the body, but it is made from mass produced, industrially available goods like felt, insulation foam and pieces of PVC piping.

OtherPeoplesPixels: Ah! Would you say that underlying your formal explorations of material is a primarily feminist approach to the art history associated with Modernism? Is this connected to why the painting concerns you mentioned before continue to come up, but in other media?

Sam Jaffe: Yes, I think so...if not a feminist approach, at least a feminine one. It comes down to the idea that a modernist vision tends to deny certain valuable qualities inherent in handmade objects like their ability to be intimate with the body or the fact that they carry with them the complex histories of their makers. I think that in our culture these may be feminine modes of experience. Paintings, historically speaking, may have more to do with a different and more traditional type of object-experience since they usually hang on walls and are observed from a distance. So, I suppose the painting references in my work could be seen as a nod to this latter type of object-experience, which I then hope to completely complicate and undermine. 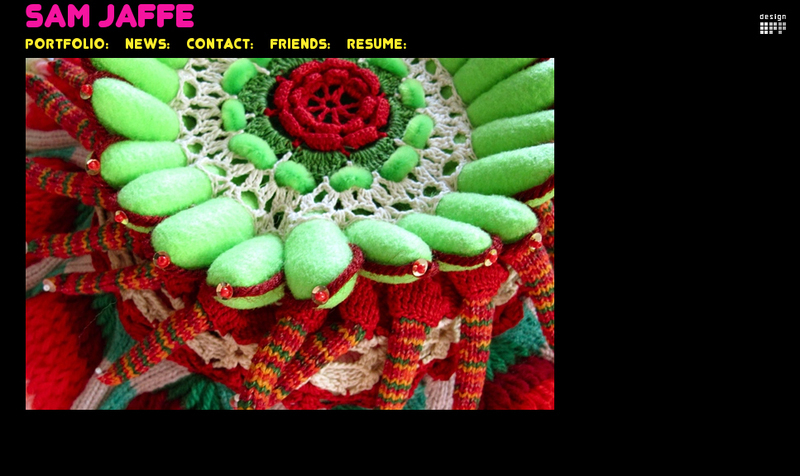