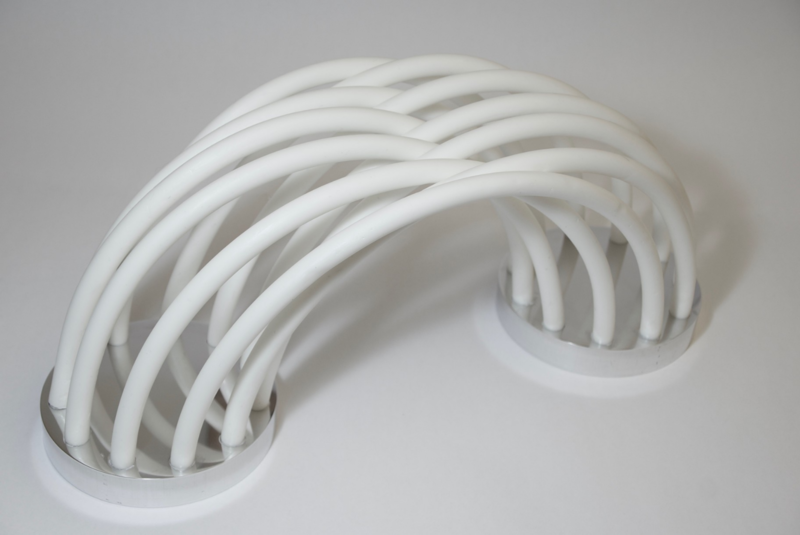 RUSSELL PRIGODICH's minimal color palette allows his materials—soap and metal—to take center stage. He juxtaposes rigidity and flexibility, durability and impermanence, hard and soft in elegant sculptures that sometimes only last days. In recent works, physics and chemistry are at play as the weight of steel pulls and presses on the shrinking, drying soap. Other works employ common domestic objects—matchbook, radiator, drawer—as "proxies for the people who live among them." Russell earned his BA in Studio Art at Saint Michael’s College (Colchester, VT) and his MFA in Sculpture at University of Massachusetts Dartmouth. In 2019, His work was included in exhibitions at Conroe Art League (Conroe, TX) and Five Points Gallery (Torrington, CT). Other notable shows include a two-person exhibition  Site: Brooklyn Gallery (Brooklyn, NY). He has been an Artist-in-Residence at UMass Dartmouth (2015-16) and The Studios at Billings Forge (2009) in Hartford, CT. Russell lives and works in Maryland.

OtherPeoplesPixels: How long have you been working with soap as a primary material? What do you love about it? What is challenging about this material when it comes to process?

Russell Prigodich: I have been using soap on and off for about 12 years now. It can be a tricky material. I love the soft folds and wrinkles that soap holds and its relation to the body, but it can be a mess to work with. Anything it touches gets soapy, hands tools, finished metal, so I have a set of tools and supplies I use only for soap. There can be a lot of setup time and energy just to have 1 fold go wrong on a big sheet and then that piece is shot and has be reprocessed. But despite these challenges, I love the material.

Humans use soap every day, now more than ever, and it is a material with which people have developed a relationship. This daily use and the sensual and visceral nature of it, bring the viewer in. It intrigues them and helps them to relate to the work physically, emotionally and conceptually. 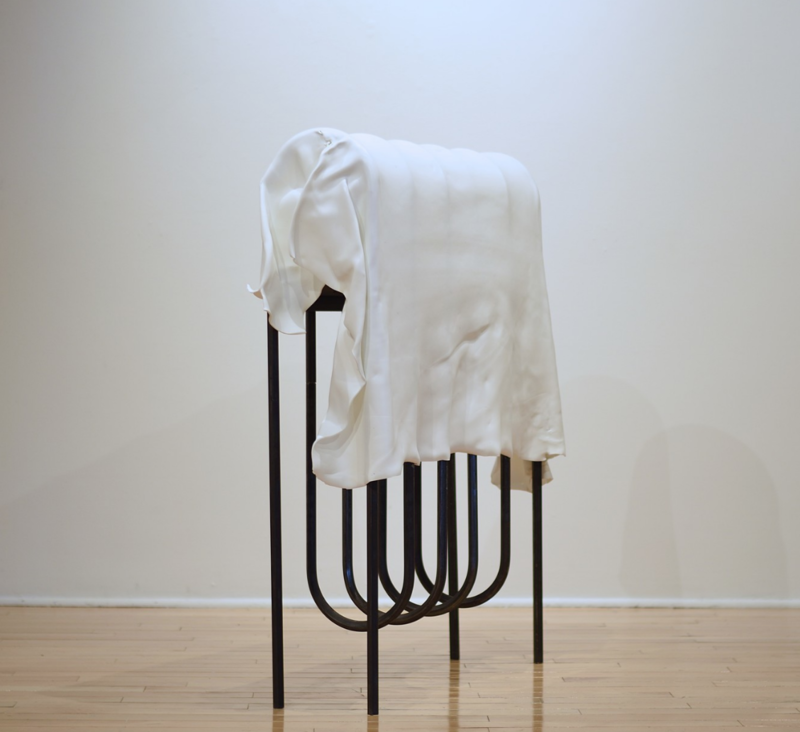 OPP: What are the similarities and differences in the process of manipulating metal and soap? I imagine they aren’t as different as their final forms imply.

RP: Until recently I was using sheets of metal and sheets of soap, trying to build a relationship between the two materials with process. Both are cut, bent and folded into forms, the steel obviously rigidly holds its form while the soap shifts with time and age. Both require planning because once the fold is

made it cannot be undone. The metal really has to be forced into shape while I often let the soap and gravity dictate the final form. I think of the process as a means of engaging with the viewer, emphasizing the act of folding. 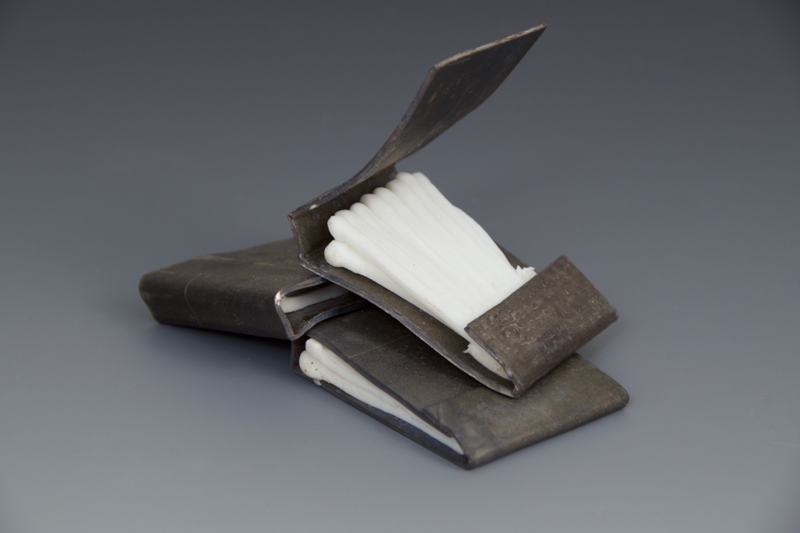 OPP: In your artist statement, you write: “These sculptures recast seemingly mundane objects of daily domestic life as proxies for the people who live among them. […] Their monochromatic clarity and minimalism invite the viewer to psychologically inhabit them.”  Can you say more about the minimal aesthetic as a vehicle for conveying psychological experience?

RP: I want to try and leave room for the viewer to bring their own experience to the work, and I think that the minimalist aesthetic leaves a space for that. The objects evoke ideas/places such as containment, room, love and loss. By outlining the concept I hope to leave room for the viewer to fill in their own narrative. More recently I have been building tension into the work, forcing the metal and soap together. Some recent soap and aluminum pieces only lasted a couple of days before the soap broke. The simplicity of their forms and surfaces allow the actions and results to be the main focus. 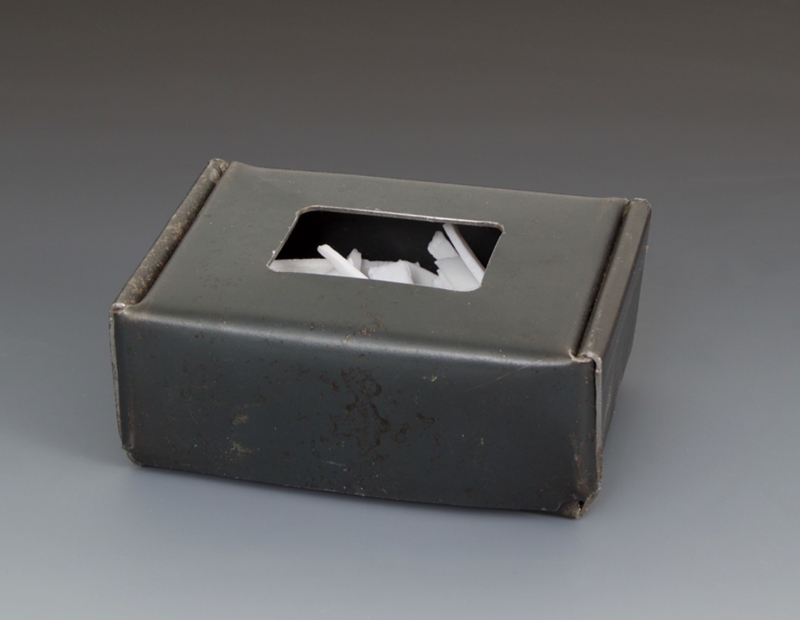 OPP: In Fold, soap mimics fabric, often draped over a radiator or folded neatly in a drawer. So the metal either supports or contains the soap. How do you think about the relationship between the two materials in this body of work? Are these physical or metaphoric relationships?

RP: I think they are both. The physical relationship is evident in their stark structural difference. When I think about soap as a skin both representing and standing in for the human body, the steel sometimes becomes the skeleton, holding and supporting it. This is most evident in Radiator, where I bent the square tubing on a diagonal so as the soap slumped and aged, the metal structure underneath became more and more prominent. In some works, the soap stands in for the body, a piece representing the whole. It’s folded into the steel structure, protected, stored, or contained, locked away; it can go a lot of ways depending on the work. Even though the soap is impermanent and the steel is enduring, the soap takes center stage, it’s about us and the steel works are the spaces we have lived. 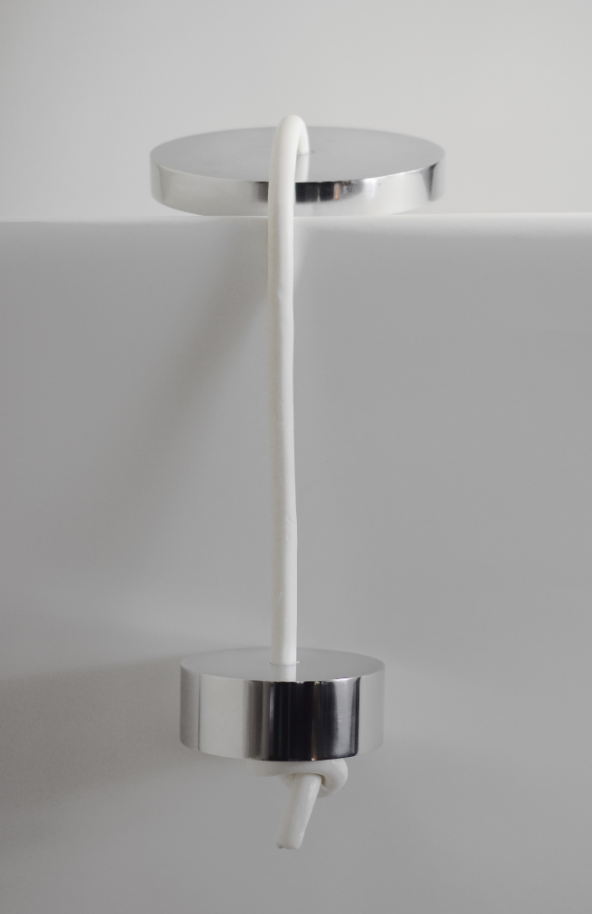 OPP: Your 2019 works that combine soap with aluminum are more abstract than the soap and lead works. How has your approach shifted in pieces like Brace and Rotor?

RP: In these works, I really wanted to dramatize time. The soap has always had a lifespan lasting months and years, slowly shrinking, cracking and aging. But, as I said,  some newer pieces only last days. There is suspense in an aluminum disc being held by a soap rod. We don’t think it will last and we wonder when it will finally break. I wanted to focus on that anticipation. I also was intentionally trying to make more abstract work. I liked the domestic reference of Fold and I think it helped build the dialogue between the soap, metal and viewer, but I was feeling confined by it. Also, I had access to a machine shop and that process lent itself to abstraction. I really believe in the meaning of material, listening to it and allowing it to speak. 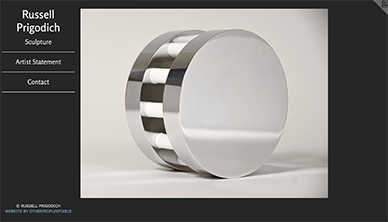