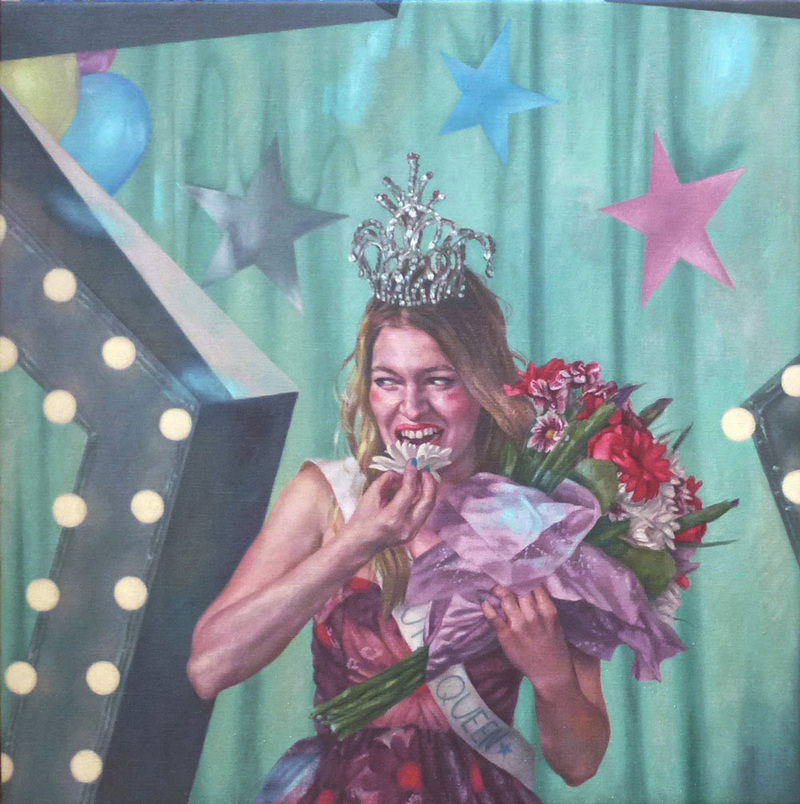 ROXANA HALLS' mostly female subjects negotiate the at-best-awkward, at-worst-strangling internalized cultural constructions/constrictions of femininity. In her representational oil paintings, they balance precariously on the edges of chairs and nervously/ecstatically laugh while consuming salad. Some sit statically with unconsumed popcorn, berries or sushi in their open mouths, while others pose demurely behind luscious heads of hair which threaten to envelop them. Roxana has been the recipient of the Elizabeth Greenshields Foundation Award (2001), the Villiers David Prize (2004) and the Founder's Purchase Prize (The Discerning Eye) (2010). Her numerous solo exhibitions include Appetite (2014) and Unknown Women (2015) at Hayhill Gallery in London. She is currently working towards her next solo show in 2016, and will be exhibiting in upcoming group shows and at art fairs. Roxana lives in London.

OtherPeoplesPixels: Beauty Queen (2014) and Laughing While Eating Salad (2013), which is directly connected to an internet meme, both take representations of femininity and make them slightly grotesque. I see these paintings as challenging cultural constructions of the Feminine, as perpetuated by mass media. Thoughts?

Roxana Halls: Well, firstly, you are right in your analysis and in connecting these images. They do indeed have a direct relationship although clearly the nature of it may not initially seem explicit. In essence you could see these pieces as representing the polar reaches of a preoccupation with the depiction of women's internalized rules of conduct and a conflicted, ever-fluctuating response to external expectations. They could be read as different stages in a life's cyclical return to phases of stasis and engagement, that while some of my figures suggest an escalating desire for abandonment, others are palpably constrained.

In my ongoing body of work Appetite, I'm posing questions about the ways in which women are appraised, influenced and policed within contemporary culture and how this 'self- surveillance' circumscribes the repertoire of legitimate actions available to women. The paintings themselves offer a riposte to any such self consciousness. The subjects instead indulge in 'catastrophic' behaviour; they are inappropriate and immune to self-censure. In many of these paintings the consumption of food seems to be the focus, but eating is so much more than a biological process. It is fraught with tension and expectation. In Beauty Queen, I wanted to extend the metaphor into the realm of female ambition, also seen to be indecorous in its pursuit of attention and fulfillment. The piece Oranges was directly inspired by Carolee Schneemann's 1968 performance at the ICA London, when the artist threw oranges at the audience while simultaneously delivering a lecture about Cezanne. She kept dressing and undressing, naked under her overalls.

Laughing While Eating Salad was directly inspired by the trend I tuned into in advertising & the media of women laughing alone while eating salad. I found these images captivating: this stereotypically feminine and inoffensive foodstuff being enjoyed with such over-articulated ecstasy! It's interesting that you see these images as slightly grotesque, I personally don't think of them in that way exactly, more unbounded and at risk of hysteria, but I'm aware of how uncommon it is that such expressions are depicted and this fascinates me and continues to inspire me. 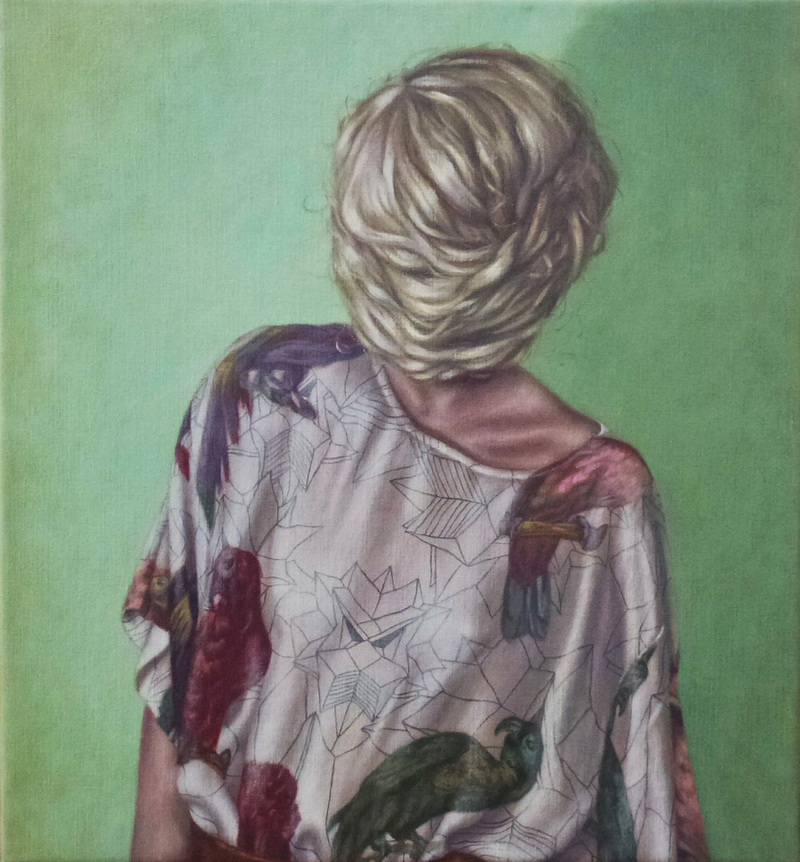 OPP: Nest I and Nest II are related. They also call into question external expectations about the Feminine by covering the faces of what look to be supermodels—their postures evoke fashion photography—with their own hair.

RH: In the Nest paintings I wanted take a more mysterious, disconcerting approach. They hint at detachment and disengagement while simultaneously seeking to entice with the evident seductiveness of their bodies, clothing and hair. These women in contrast to those in the Appetite seem lost in a troubling borderline state. Possibly they are undergoing an evolution, or perhaps are smothered by self censorship? It won't surprise you to hear I'm very interested in the writing of Julia Kristeva and her discussion of abjection.

Equally the exploration I undertook in making such imagery calls to mind sources such as Baudelaire’s poem La Chevelure (c1857), and the Nick Cave song Black Hair. In both cases, there is something about the investment and singular focus upon one part of the female body which transmutes into something strange and peculiar. The more you get intensely involved with one part of the body, the more it starts to move into the abject and it becomes a substance which is both of itself and yet separate from itself. 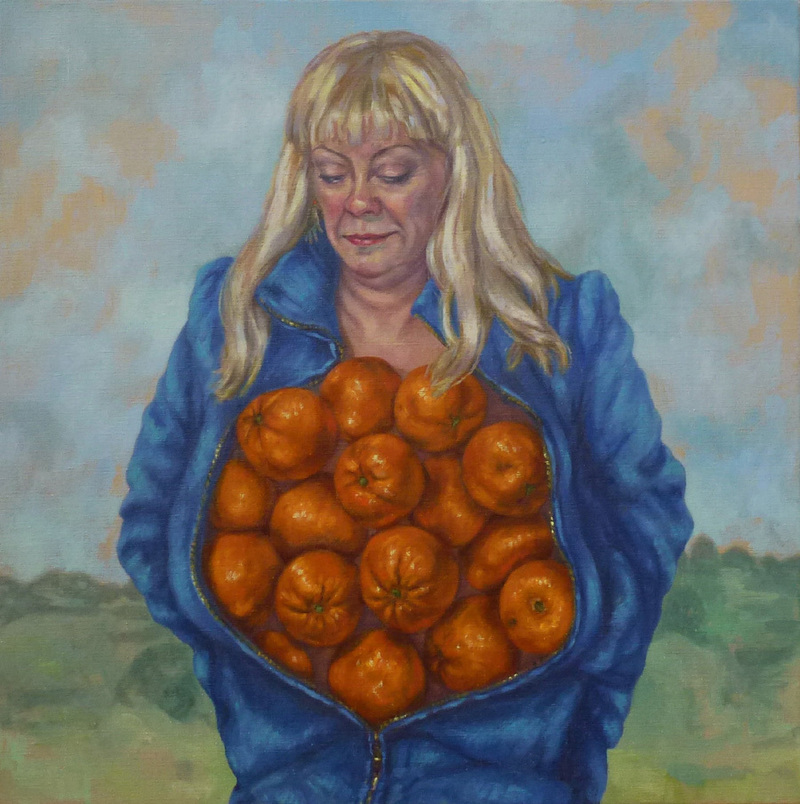 OPP: I've noticed a lot of precariousness in your work. A Little Light Reading (2012) and A Startler for the Careful Housekeeper (2011) are a few examples. These works and others from Shadow Play and Suspended Women read as allegorical to me. What's being balanced, on the verge of falling, in these series?

RH: These earlier pictures have very similar concerns to the other later pictures we've discussed. This apparent precariousness is a primary underlying theme in most of my work. I see it in the image of a teetering pile of crockery in danger of toppling, a laugh which seems to be just to one side of the boundary of hysteria or even the discomfiting ambivalence of a female performer. In Shadow Play, I wanted to reference the then-prevalent taste for vintage objets and the way this seemed to hint at a desire to posses the symbols of a certain kind of idealized polite culture and, as I saw it, the secure and 'lady-like' life they seemed to represent. I wanted to subvert such domesticated aspirations, and in some of the paintings I felt the barely glimpsed female protagonists were themselves seeking to sabotage the props of their lives. 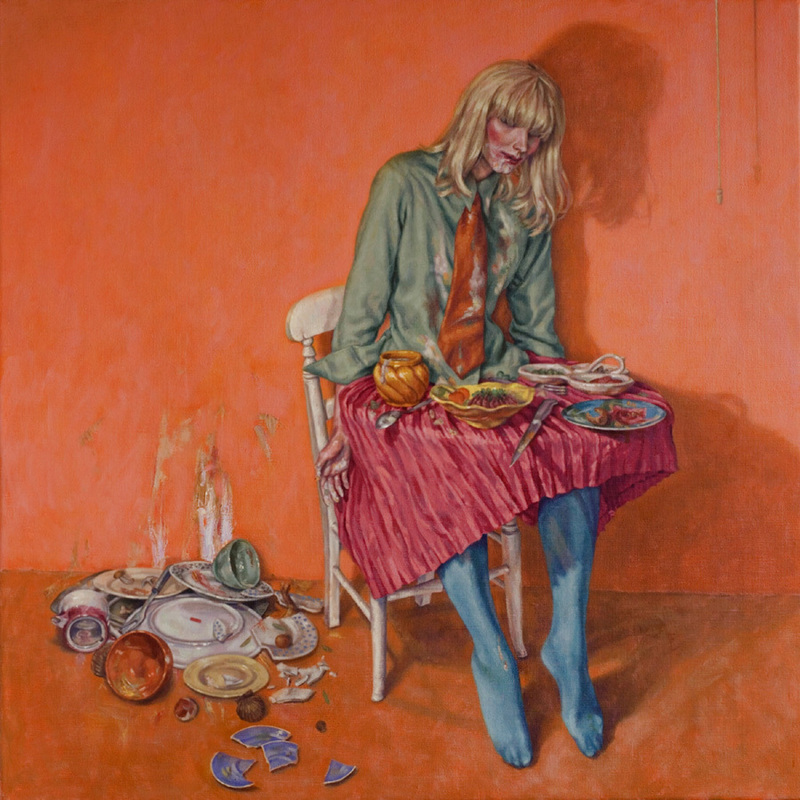 OPP: Your studio is in the saloon bar of a defunct 1930s London theatre, now a Bingo Hall. Aside from the influence of this physical space, what captivates you about Cabaret?

RH: Yes, I am extravagantly fortunate in having such a wonderful space to work in, and it clearly has exerted a powerful influence over my work. But in the best traditions of serendipity it has always felt oddly inevitable that I would make theatrical paintings. As a child I only wanted to be an actor, and until my very first, life-changing attempt at oil painting I had very little interest in any other direction.

In 2004 I was the recipient of the Villiers David Prize, an award intended to provide funds to enable an artist to travel and undertake research in order to embark on a creative project. My early fascination with theatre was clearly a component in my choice of subject, and at that time I was beginning to notice an emergent cabaret and burlesque scene in London, which exploded by the time I'd finished and exhibited the paintings. Also I've long been fascinated by the whole Weimar milieu, as much as a more home-grown Music Hall & Variety tradition. Mainly I saw within the theme an opportunity to explore the possibilities of artistry and autonomy and reflect on notions of gender, sexuality, identity and spectatorship. And of course it also unleashed a desire to engage in a project of ambitious and spectacular proportions! I've never entirely felt that the series was finished, and am still harbouring a smouldering wish to revisit the theme. 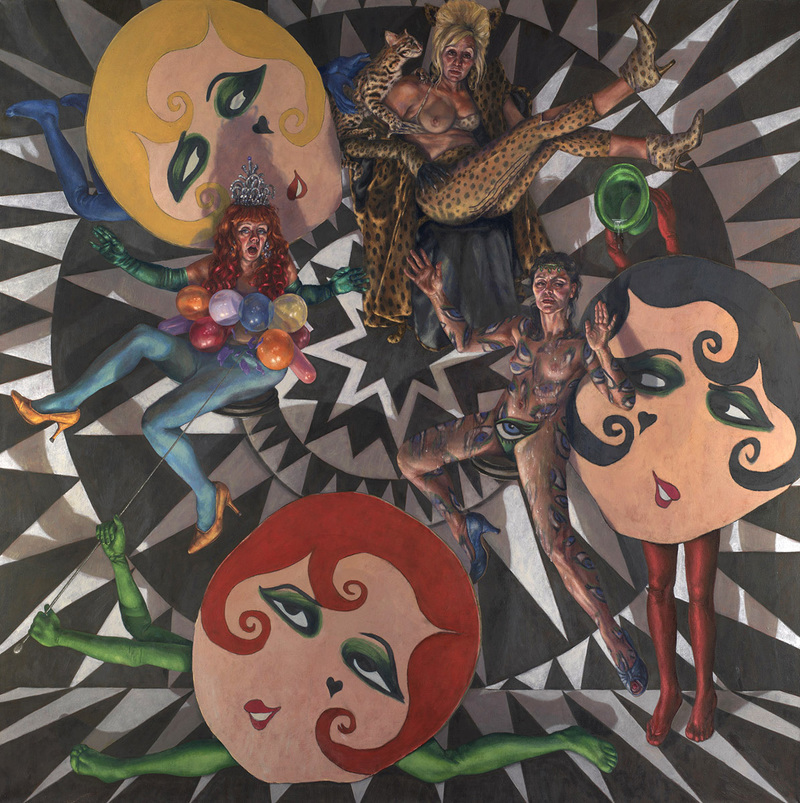 OPP: Could you talk about the relationship between the paintings in Tingle-Tangle, made between 2005 and 2009, and CURTAIN FALL - The Tingle Tangle Photographs, created in collaboration with photographer Matthew Tugwell in 2009? None of the photographs are direct re-stagings of the paintings, but they seem to have the same models. What led to the creation of the photographs?

RH: The creation of the Tingle-Tangle paintings was a complex and involved process which required a lot of commitment from my models. Many of them were actors and performers and genuinely brought something of their professional understanding to the characters I asked them to inhabit. I constructed sets in order to depict each separate performance. I made, sourced and found costumes and props. My practice of essentially building my own cabaret show out of cardboard and charity shop discoveries linked with the improvisational spirit of third rate variety! While I'm wary of ever explicitly revealing how a picture has been made because of the way this can affect the reading of a piece, I wanted to somehow offer a glimpse into the process of transforming these mundane elements into the spectacle you see in the paintings. I wanted to show the 'performers' themselves and give a glimpse of the glorious theatre in which I have my studio which partially inspired them. Once I was offered a show at the National Theatre, the possibilities of the exhibition space itself gave me the scope to explore this in collaboration with Matthew Tugwell. 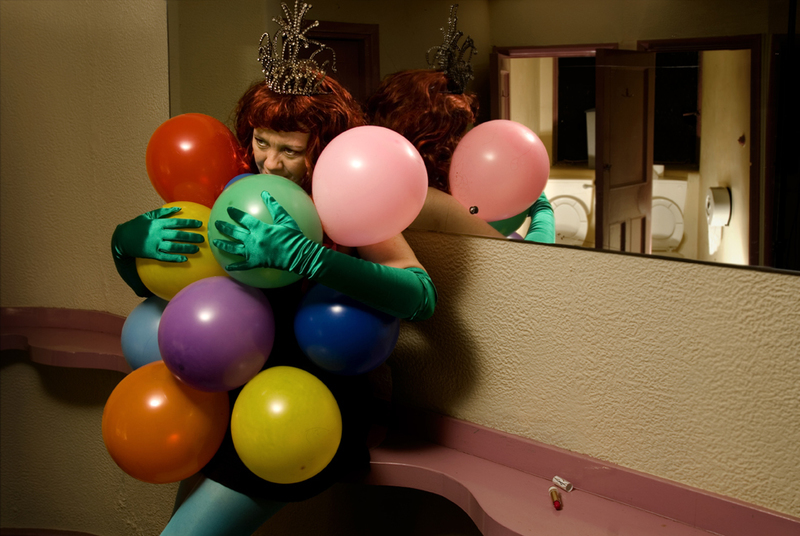 RH: Balancing commissioned work with my own projects is unsurprisingly a little tricky at times, as an interesting job may of course be offered just as you're fully engaged with your own momentum. But I've always seen the right commissioned work as not only financially rewarding but also a real opportunity for development. I say the right commissioned work because, yes, I have turned down work along the way when I felt the project wasn't best suited to my abilities or I've been too busy with preexisting commitments. The Alice and Wizard projects have given me really quite extraordinary opportunities to develop narrative structure and complexity, and to produce work based upon preexisting source material has been immensely challenging, freeing and rewarding. The development of these projects has undoubtedly had a powerful affect on my work which is affecting the direction I'm taking in my practice subsequently, even though my underlying themes remain a constant.

As I've described with the making of the Tingle-Tangle paintings, I've employed a somewhat extensive and complicated process of creation. When I came to conceive of the Alice Staircase, I knew right away that I couldn't build Wonderland in my studio! So while I again made my own costumes and asked friends to 'perform' the characters—I used this familiar approach partly to circumvent the inevitable difficulty in attempting to sidestep the dominance of John Tenniel's wonderful illustrations—I also decided to use photography, a source material I had rarely used up until this point. I've been using the same method in my ongoing Wizard of Oz series.

I've long held the view that the image I make and that which I hope to explore and convey within this image should be the guiding principle of my work and that the image should be brought into existence by whatever means necessary. Partly through the making of Alice and Wizard I feel I'm beginning to sense what further possibilities might be unfolding. 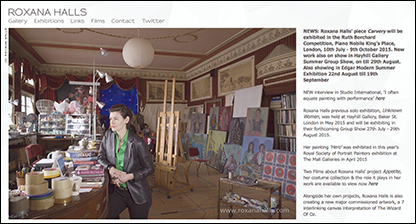