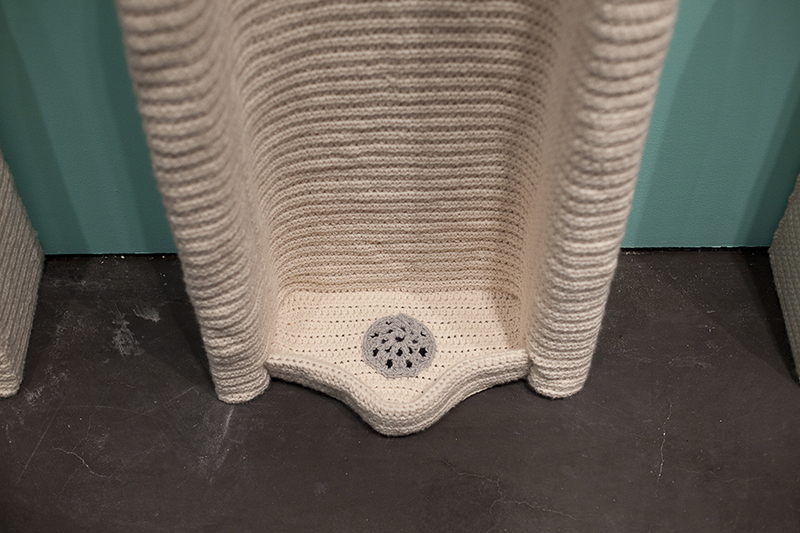 NATHAN VINCENT's mother taught him to crochet at the age of 10. As an adult, he has employed the historically feminized handicraft of crochet to examine cultural signifiers and accoutrements of American masculinity—tools, cigars, a lazy boy, a lawn mower, a briefcase—playfully calling into question culturally constructed notions of gender. In his newest work, Nathan explores power dynamics, surveillance and aggression, rendering tools of brute force, including dynamite and language, soft and yielding in his chosen medium of yarn. Nathan earned his BFA from Purchase College, State University of New York. He was a finalist for the West Prize in 2008 and was an artist-in-residence at Museum of Arts and Design (New York) in 2012. His upcoming solo show at Muriel Guepin Gallery in New York opens December 13, 2013, and his installation Locker Room will be on view at the Leslie-Lohman Museum of Gay and Lesbian Art from January 17 to March 16, 2014. Nathan lives and works in New York.

OtherPeoplesPixels: Have you been crocheting ever since you were a kid?

Nathan Vincent: After I initially nagged my mother enough to teach me to crochet, I went on to learn knitting. She didn't know how to do that, or wasn't interested in teaching me, so I purchased a knitting book for kids and taught myself. I made some granny squares, some socks, a scarf, and some mittens. After that I didn't really do anything with needlework again until I was in college. It must be like riding a bike though. I picked it up and remembered everything pretty easily. It was strange how it came about, too. My friend was crocheting herself a sweater, and I borrowed her hook for a couple hours and ended up with some random 3D shapes when I realized I could make sculptures out of this material! 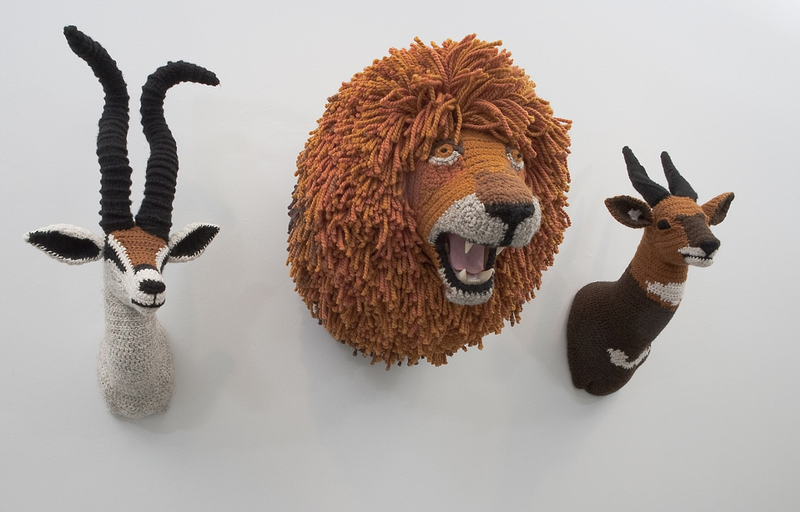 OPP: What do you like about the process of crochet, as opposed to the result?

NV: The process of crochet is not only soothing but also rhythmic. Once you get going, it is very difficult to stop. Until your arm starts aching, and then it's easy to put it down. HA! I think I love its versatility best. There's something wonderfully flexible about deciding spontaneously that the piece you are working out needs to expand and all you have to do is add in a few stitches. Additionally, while I try to be very precise, crochet is wonderful at hiding mistakes, and I love that.

OPP: Because crochet is such a versatile medium with amazing formal capabilities and numerous cultural associations, there is some really fantastic, under-appreciated work out there. What other contemporary artists working in crochet are you interested in or looking at?

NV: Gil Yefman is working with some really interesting ideas, and I love his aesthetic. Sheila Pepe, of course, is doing great work with large scale installations. And, Jo Hamilton is amazing at portraiture! 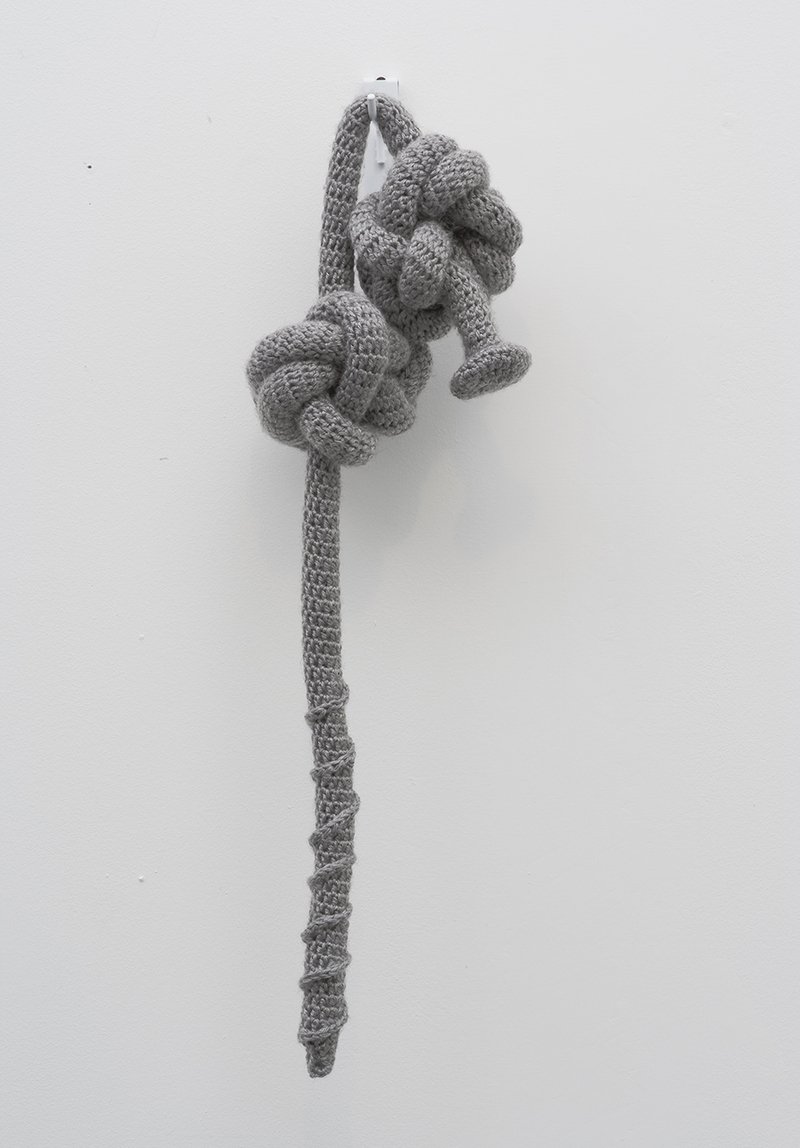 OPP: Your crocheted screws (2004-2009) stand out to me. They speak vulnerably about masculinity and yet they remain playful like a lot of your other soft sculptures. They are reminiscent of flaccid male genitalia because you've embraced the natural sagging properties of the crochet instead of building an internal armature for the sculpture. What made you decide to make these sculptures different than the others? How do you think about those differences?

NV: You hit the nail on the head. *smirk* I chose to make the screws because I was looking to soften objects that stand out as rigid, strong, obvious symbols of masculinity. As I started the pieces I realized that since they were already out of scale, I might as well exaggerate everything in order to speak to the issues around masculinity and femininity that I was so interested in. The elongation and knotting of these pieces pushes their confusion and compounds the references to genitalia.

I think part of what you are asking is, why haven't I let all of my pieces take on the loose, sagging, fabric like qualities of crochet? This is a conscious decision on my part. For some time, I've been making representational work, and I'm interested in that moment when you realize that the object in front of you is actually made of yarn. This recognition and the humor, discomfort or bewilderment it causes compel folks to consider the ideas I'm putting in front of them. If all of the work was limp, it wouldn't have the same effect. 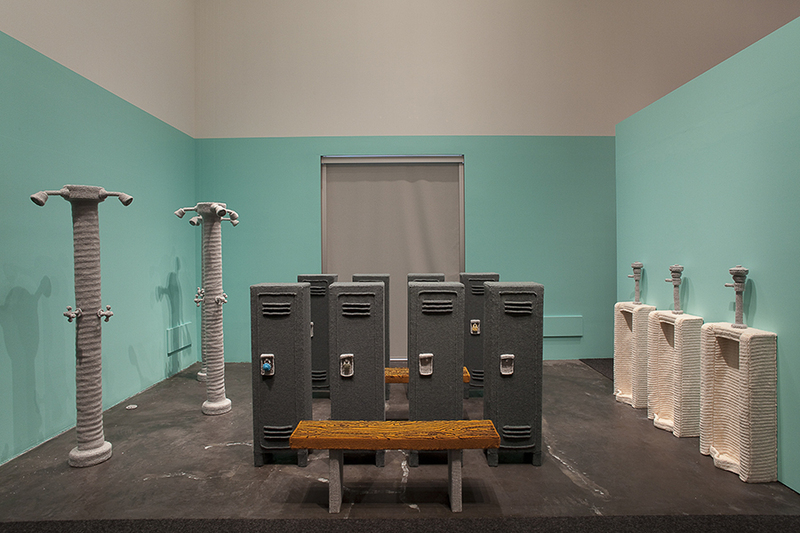 OPP: Did you know before you started Locker Room (2011) that you would crochet the entire room or did it evolve after you made a single sculpture? Did you have assistants?

NV: I set out to make an entire locker room. Of course, the execution of this changed over time and was refined as I started to make the piece. But, there is quite a bit of pre-planning in an installation of this size. I did have some assistance on this piece. It took me over a year from start to finish, and I had one friend who spent a week with me knitting away. I couldn't have finished it without her. (Thanks Courtney!) In addition, the Bellevue Arts Museum gave me a sum of money to assist in getting the piece done, and Lion Brand yarn donated all the yarn! It takes a village sometimes.

OPP: How do you feel about using assistants in your work?

NV: My ideas about employing assistants have changed over the years. When I first started making art, I thought it was a huge sell-out to have any help. I wanted my own hands to make every inch of every sculpture. I still feel a connection to the art and want to be involved, however, I have come to realize that my dreams are often bigger than there is time in the day. At some point if you want to make large scale projects, you just have to have help. So, I have enlisted a few people for projects since Locker Room. I still do all the designing and make all the swatches, but I hand off very simple tasks to others when time requires. For instance, I made over 1,000 sticks of crocheted dynamite for a recent installation, DON'T MAKE ME count to three!, and I definitely had help making the tubes for the dynamite. Because I feel the need to be involved and actually touch the art, I made a ton as well and assembled everything myself. On the whole, I do my own work. But sometimes you just need that extra pair of hands!

As a side note, I have met some of the most interesting people by hiring assistants. I prefer to use community-based services like Craigslist to seek them out, and I have a small group of people I am now friendly with because of my artwork! 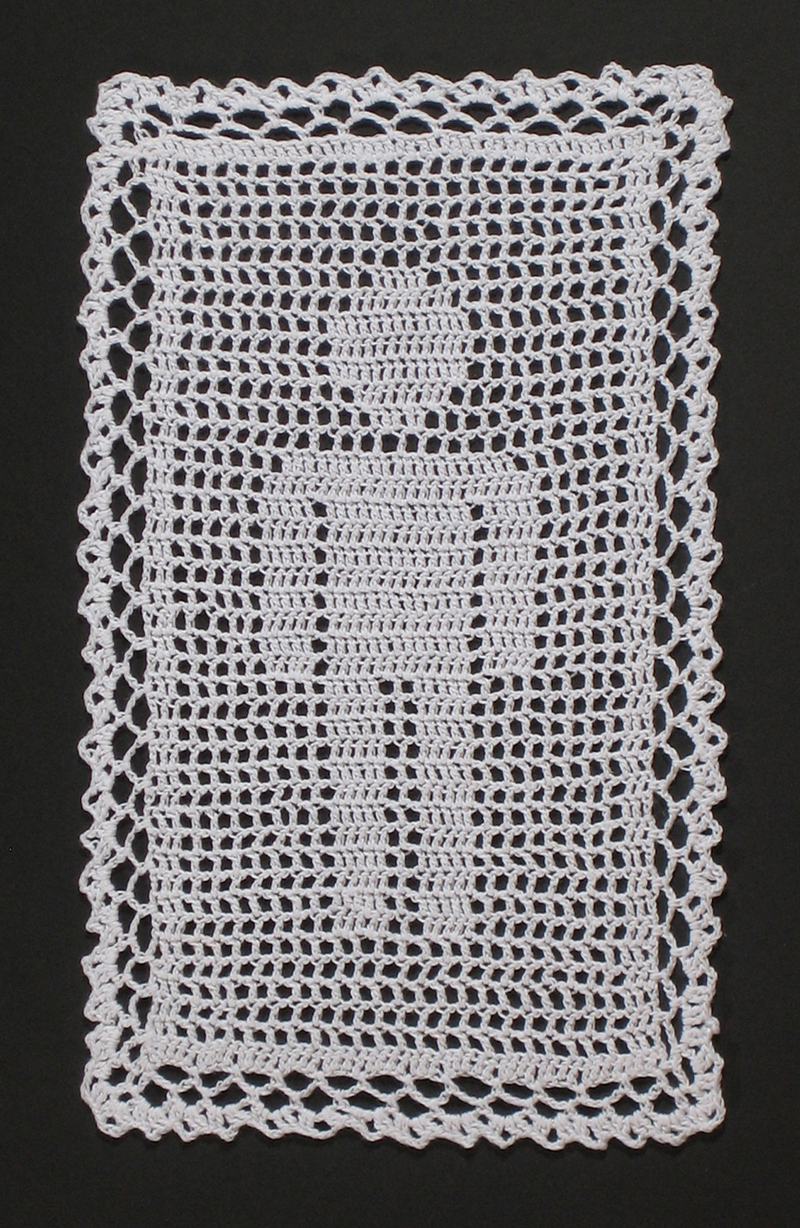 OPP: In recent work, you appear to be shifting away into new territory. For example, Joystick and Play with Me (both 2011) seem more about nostalgia and the differences and similarities between playing video games and doing handicrafts. And then there are the crocheted gas masks. Are these about connections between gender, aggression and war? Or is this a break from previous subject matter?

NV: That's a very good question. It's funny how clearly one thing leads to another within an artist's mind, but from the outside it's a completely different story! When I started working with crochet, I was very interested in ideas surrounding gender and gender permissions. I found it interesting that men were allowed to do some things and women others. Where do these ideas come from? Who decides these things? How does it affect us as individuals? What objects or symbols speak of gender and why? This is where the boy toys came from. For me, these objects are clearly cemented in masculine culture, as if to say, "This is what it means to be a man."

I was on this kick of recreating objects that said "boy" or "man," when I realized that a lot of the work I was making dealt with aggression and violence. I began to think deeper about this and noted that strength is almost always connected with masculinity. And, what is the easiest way to express strength? Through weapons. By projecting a sense of power. This led to my interest in power relationships, and I started to use yarn as a metaphor for weakness against these strong and powerful weapons. I am still dealing with these ideas today and picking them apart. 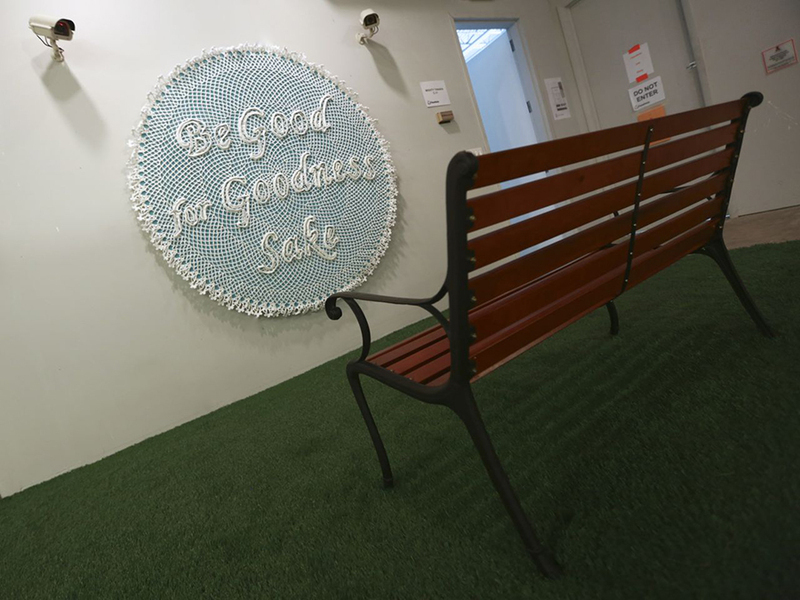 
OPP: I actually see the crochet and the yarn as representing the strength in those pieces. Obviously, dynamite has more brute force, more physical strength than yarn, but I think of weapons as representing fear. Humans never would have developed weapons if we hadn’t feared that we weren’t naturally strong enough to defend ourselves. In life or death situations, violence and aggression are necessary to defend ourselves. But in contemporary life, most violence is a response to an imagined threat, not an actual one. That’s why the connectivity and flexibility represented by the web of the crochet—not to mention the therapeutic, meditative  benefits—seems to offer an alternative to the fight/flight response. Thoughts?

NV: I can see your point about weapons being borne out of fear. That is definitely the case. And, I agree that most threats these days are imagined. For me the dynamite made of yarn in DON'T MAKE ME count to three! is analogous to a world of empty threats. We are often in power relationships where we follow orders or instructions—first from our parents, then our teachers and bosses and governments—because we are told to, without thinking about whether it is in our best interests. Because these threats exist—you'll get a spanking, you'll go to hell, you won't make enough money—we stick with the program, often missing the fact that the consequences are insignificant or inconsequential.

OPP: What other pieces exploring power dynamics are you planning or working on?

NV: I will be showing Be Good for Goodness Sake, an installation I made in collaboration with Alex Emmart, along with several other pieces related to the installation in December at the Muriel Guepin Gallery in New York City. This piece speaks directly to the power dynamics that exist in a world of constant surveillance. We've been told through the years by religion that the gods are watching us. We better not screw up or we'll suffer eternal damnation. As technology has developed we've found ways to install actual physical presences to watch over us and keep us in line. These ideas are explored through a series of security cameras, doilies, as well as broadcast footage and encourage the viewer to contemplate such issues. Is this something we are comfortable with? Does our behavior change when we are on view? And, what role do we play in this relationship? 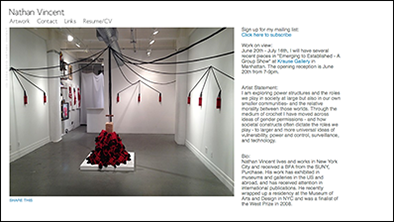 Featured Artist Interviews are conducted by Chicago-based interdisciplinary artist Stacia Yeapanis. When she’s not writing for OPP, Stacia explores the emotional and spiritual significance of repetition in her cross-stitch embroideries, remix video and collage installations. She is an instructor in the Department of Fiber and Material Studies at The School of the Art Institute of Chicago, where received her MFA in 2006, and was a 2012-2013 Mentor-in-Residence at BOLT in Chicago. Her solo exhibition I Still Haven’t Found What I’m Looking For is on view at Klemm Gallery, Siena Heights University (Adrian, Michigan) until December 6, 2013, and she is currently preparing for another solo exhibition titled Everything You Need Is Already Here (Heaven Gallery, Chicago) in January 2014.