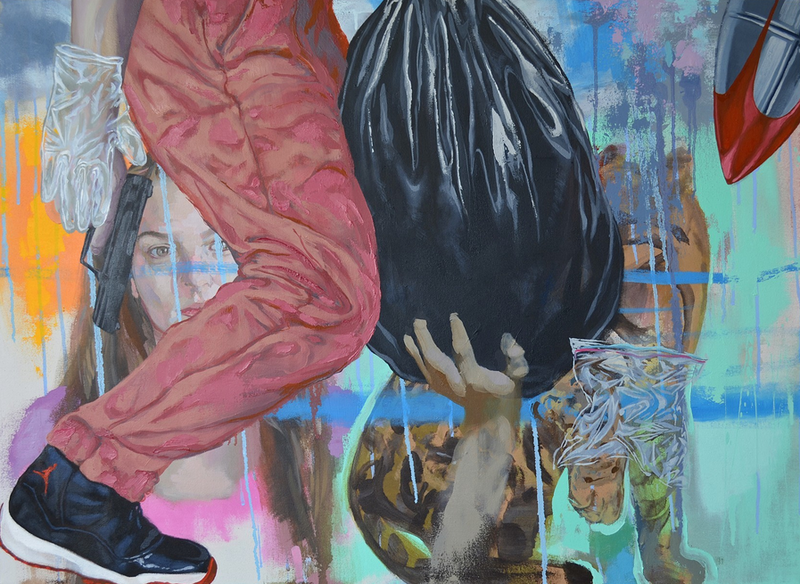 YIKUI GU wants his work to be "horrifying and hilarious." His colorful, chaotic paintings, drawings and collages have the feeling of an overwhelming parade that started out fun. But now everyone's a little too drunk, desperate and on the verge of violence. Desire and longing are intensely present, and so is the anxiety the follows wanting. All this becomes a hilariously horrifying critique of capitalism, commodification and the inherent violence that accompanies the striving to always be on top. Yikui earned his BFA from Long Island University in 2005 and his MFA from Pennsylvania Academy of the Fine Arts, MFA in 2008. He has exhibited internationally, including shows at G.A.S. Station (2015, 2010, 2009) in Berlin, Ground Floor Gallery (2015) in Brooklyn, the Philadelphia Mausoleum of Contemporary Art (2013), the Siena Art Institute (2011) in Siena, Italy and the Delaware Art Museum (2012) in Wilmington, Delaware. During the summer of 2015, he was an Artist-in-Residence at the School of Visual Arts in New York. His recent solo show Chance Encounters just closed at Hungerford Gallery at the College of Southern Maryland, where Yikui is an Associate Professor. Yikui lives in Philadelphia.

OtherPeoplesPixels: I won't ask you to be a poet, but I will ask you to expand on your artist statement. To you, what's horrifying and what's hilarious? Why is it important to combine these qualities?

Yikui Gu: I see horror and humor everywhere in life. It’s in almost everything we do, although we may disagree on which is which. I think those two qualities are often linked together, so it’s not that I find it important to combine them, rather I see them as already combined, pre­packaged in a way. The famous Buddhist expression “life is suffering” nicely sums up the horror, while all the petty things we do in spite of that are what is hilarious. We all age. Knowledge of our mortality can be horrifying, and when someone buys a sports car or a pair of breasts to combat that, it’s hilarious. We are all born into a world where we’re conditioned to be good worker bees, to take our place faithfully in the assembly line, and look forward to  the promise of a wonderful retirement. That’s horrifying and hilarious. Look at the art market, that place is full of horror and hilarity. 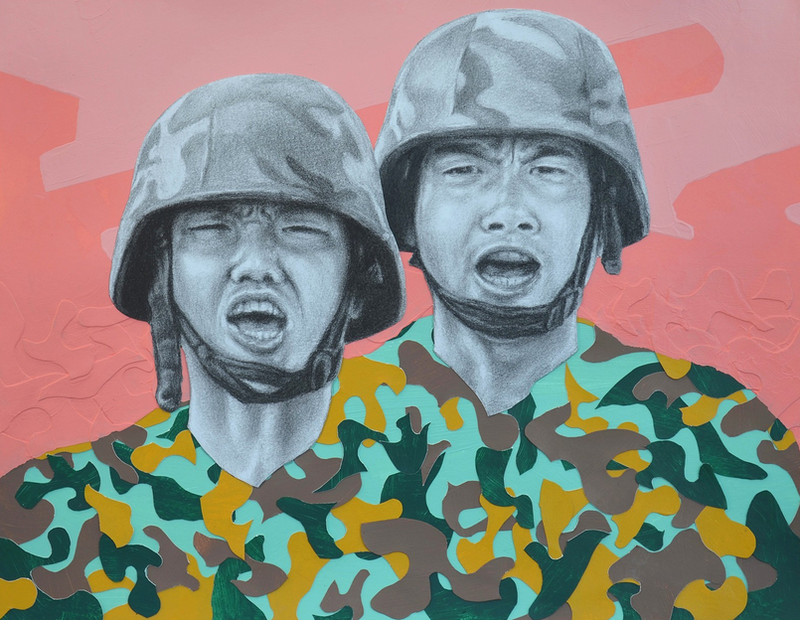 OPP: Tell us about your series Lovers Melt. I get the impression that the faces are sourced from found images and then you dress them up in military garb, camouflage and, in one case matching hijabs. I mostly get that impression from God Hates Fags, which appears to have been painted and collaged on top of an image of some anti­-gay protest. In some cases, the people seem to be coming and, in others, they appear to be screaming in anger, even rage.

YG: Lovers Melt is a recent series that I began this summer. I was at a residency at the School of Visual Arts in New York for the month of June, and that’s where all those pieces were produced. I’d been wanting to combine drawing, painting and collage, and the residency was a perfect opportunity. For the series, I wanted to use images of facial expressions from staunchly patriarchal groups, be it the military, religious fanatics or cultural conservatives. The idea was to take these charged expressions of anger and misconstrue them into something sexual, something homoerotic. So the face of a screaming soldier can become the face of someone enjoying orgasm. Interestingly enough, I didn’t need to change the expressions at all, once they were positioned too close to one another, they re­contextualized themselves. It was the perfect way to mock these institutions.

Also, an aside about God Hates Fags. I think that piece perfectly sums up my thoughts to your first question. It’s both horrifying and hilarious that there are people out there who believe the omnipotent creator of the universe would experience a petty human emotion such as hate. And that’s coming from an atheist. 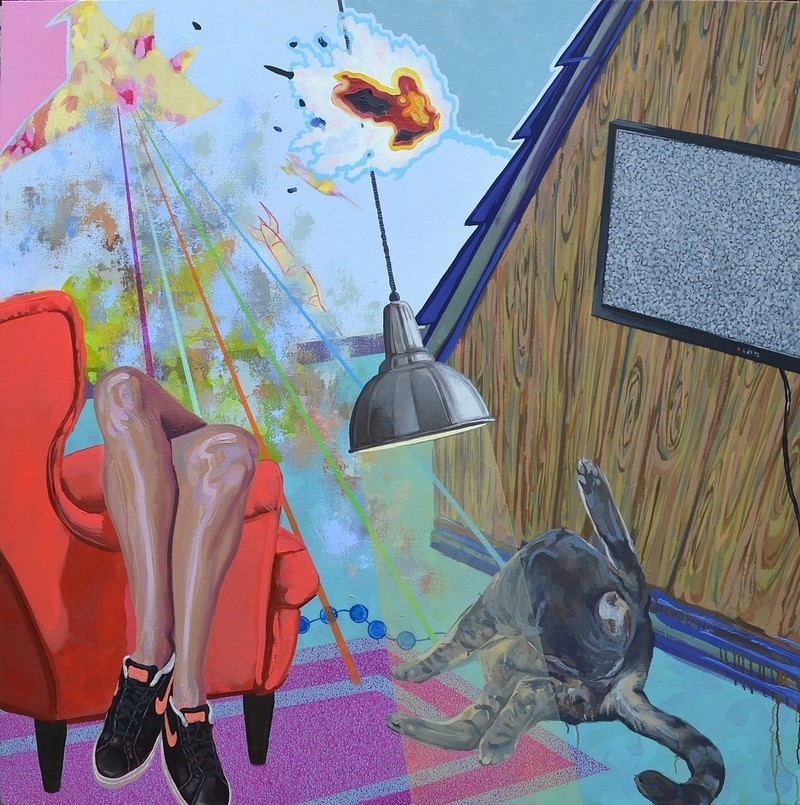 OPP: There are a lot of partial bodies that fade into the background and disembodied pairs of legs, especially in Sneakerheads. Could you talk about this treatment of the figure?

YG: I was academically trained, and my work used to reflect that more. I used to paint lots of portraits, and I was happy to show the world that I was a well trained monkey. Today its very hard for me to make a portrait or a figure in a “traditional” sense, so the disembodied quality is a reflection of that. It’s also how we all experience the world and the other people in it. On a crowded subway I may only catch a fleeting glimpse of an arm or leg, the same can be said of most of our daily experiences whether we’re shopping, dining, fucking, or at an opening. Who says a figure must be complete? And what is complete anyways? 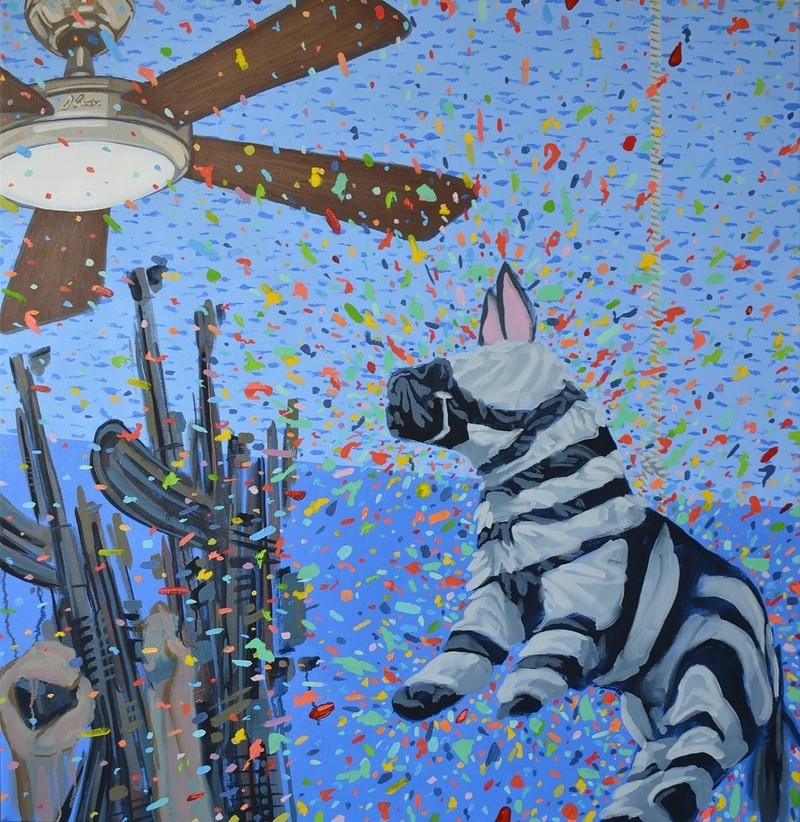 OPP: Could you talk about the recurring motifs of semi­automatic weapons and bombs? Is your work a response to violence in general, or specifically the violence of war?

YG: The imagery of weapons, bombs, soldiers, and warplanes are a response to the general violence in the world, a reflection of the world’s power dynamics, the horror part of human experience. While these images speak most directly to the violence of war, they’re also meant to suggest the ever present threat of violence in daily life. That threat permeates everything, it exists in the sexual, economic, political and social realms. It’s the source of most of the world’s power, and by extension, its problems. Additionally, most of my depictions of weapons and such are generally done in an unrealistic, almost cartoony way. This is to neuter that threat of violence, and my attempt at injecting a bit of levity into the situation, the humor if you will. Even when weapons are painted realistically, such as the bomb in I Bomb Atomically, it’s a realistic depiction of a cartoon bomb, a bomb that couldn’t ever exist (I hope). 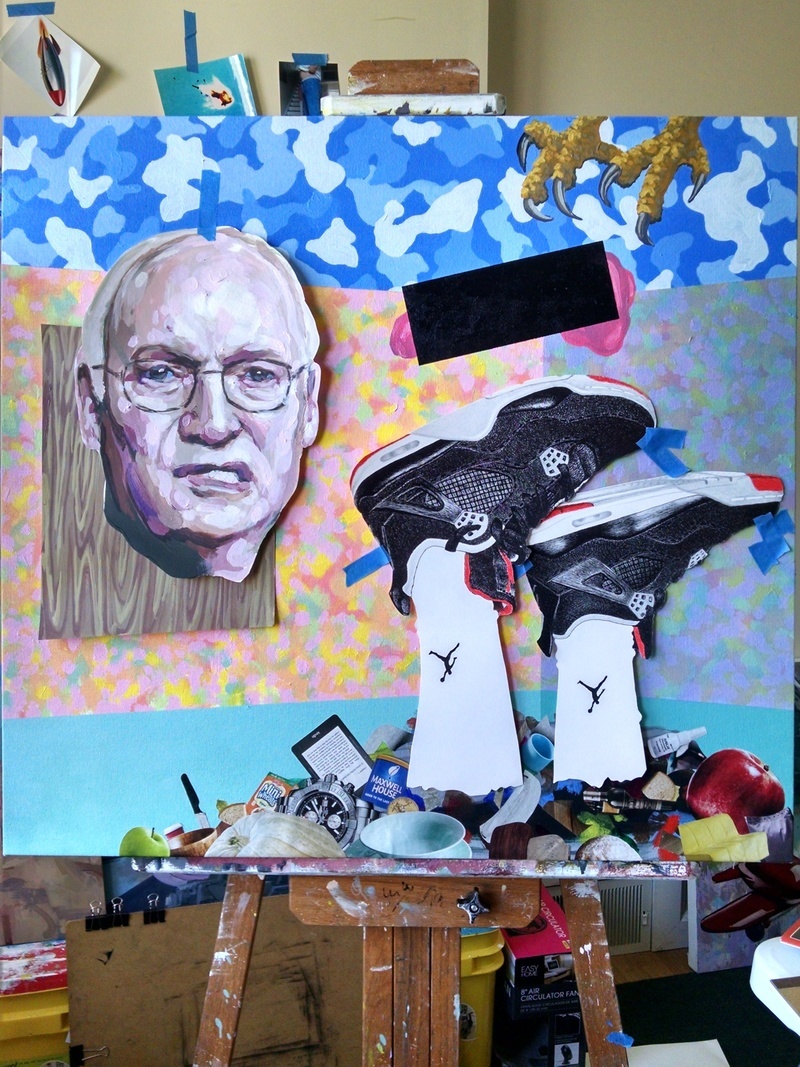 Don't be a Dick
In-progress painting

YG: Since returning from my residency at the School of Visual Arts, I’ve been combining drawing and collage into my paintings, which has been very exciting. While I'd always thought about doing that, the limited time in NYC gave me the perfect opportunity to try it. I’m curious to see where it goes. I’m still interested in using political, cultural and domestic imagery to explore the horrible and hilarious things that human beings do. Specifically, I'm working on an in-progress painting called Don't be a Dick. A charcoal portrait of Dick Cheney will be pasted onto the spot where the current painted version is taped. The legs with the Jordan Bred 4s are done with ink and colored pencils and also will be pasted on.

Conceptually, I'm thinking about ideas I've always thought about, especially in the series Sneakerheads. The commodification of sneakers, with blue chip brands and highly sought after releases, mirrors the art market perfectly. There are re-sellers, counterfeits and buying frenzies. This is contrasted with the pile of garbage—collaged from magazines—the legs are sticking out of. Over-packaging, waste and planned obsolescence have been on my mind. Even the readily available images I used from Ikea catalogs—a different type of detritus—further drive home the point that we produce too much crap, shitty art included. Dick Cheney is there because he's an asshole, and I'd like to mount his head and hang it in my house. He's the perfect symbol of White Privilege and pure greed, which are connected to the commodification and waste I mentioned earlier. Because of that, it won't matter if he's not recognized in the future. 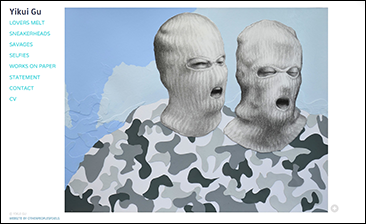