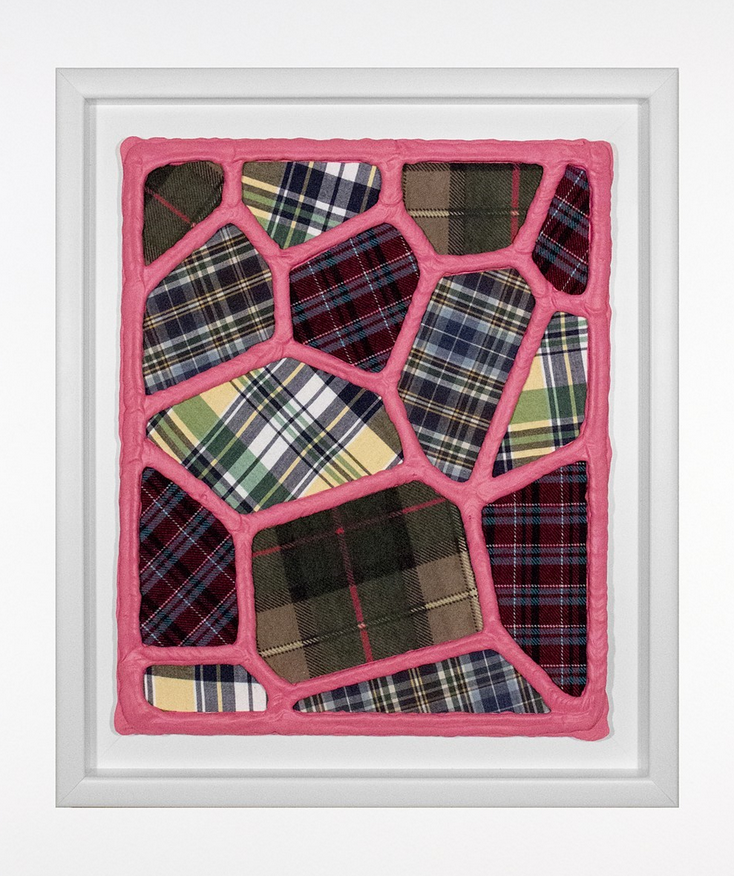 NATHAN SKILES' constructions—both sculptural and two-dimensional—are simutaneously silly and dead serious. In acrylic diptyches that reference target practice and the game of darts, he highlights duality. In foam rubber cuckoo clocks and reconstructions made from chopped-up foam rubber cuckoo clocks, he emphasizes synthesis. In collages that mash up familiar textile patterns like camoflage and plaid with the folk art form of the Pennsylvania Dutch hex sign, he traffics in the abstract languages embedded in material culture. Nathan earned his BFA (2002) at Ringling School of Art and Design in Sarasota, Florida and his MFA (2006) at Montclair State University in New Jersey. He has had solo exhibitions at Green Contemporary (New York, NY), Hunterdon Art Museum (Clinton, NJ) and the Center for Arts and Culture at University of Notre Dame (South Bend, IN). In 2017, his work was included in group shows at Tampa Museum of Art, Centre Gallery at University of South Florida and Highlands Museum of the Arts (Sebring, Florida). He is an is an instructor at the Ringling College of and Design. Nathan lives and works in Sarasota, Florida.

OPP: Can you talk generally about how think about and work with collage? This process also seems to be a metaphor in your work.

NS: There’s a lot to disentangle in this question. Growing up in a German Baptist home in rural Indiana, making was an integral part of my early experience. A connection was born out of a dichotomy of a pride found in self-sufficiency and the embarrassment of standing apart from culture at large, in ill-fitting handmade and secondhand clothes.

As an object, nothing quite exemplifies this like a patchwork quilt made of recycled scraps. These specific quilts, like Dr. Frankenstein’s monster, are a strange, imperfect hybrid born from the remnants of whole beings. Previously intact, leftovers now lashed together to find a new life.

Seamless integration is often a noble idea fraught with rough edges and pushback. As artists, I think we need to embrace that collage might not improve upon the original, that corruption and contamination might be collage’s most effective and evocative qualities. 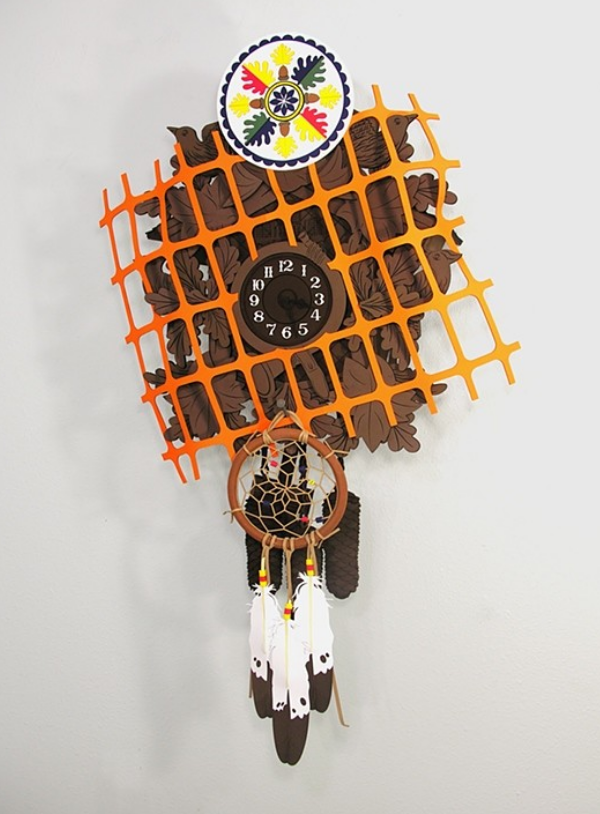 OPP: Up until recently, your dominant material was foam rubber. You used it in various early sculptures, in the Birdhouses, in the Cuckoo Clocks, and in The Clockmaker’s Apprentice (2011). What drew you to this material?

NS: I gravitate towards wry and knowing gestures. The earliest sculptural work started out as rather unconvincing ersatz replicas of overly aggressive props; swords, arrows, traps. As I became more familiar with the materials I began to drop the more problematic and fugitive elements and eventually landed on foam as a ubiquitous, malleable and convincing material. 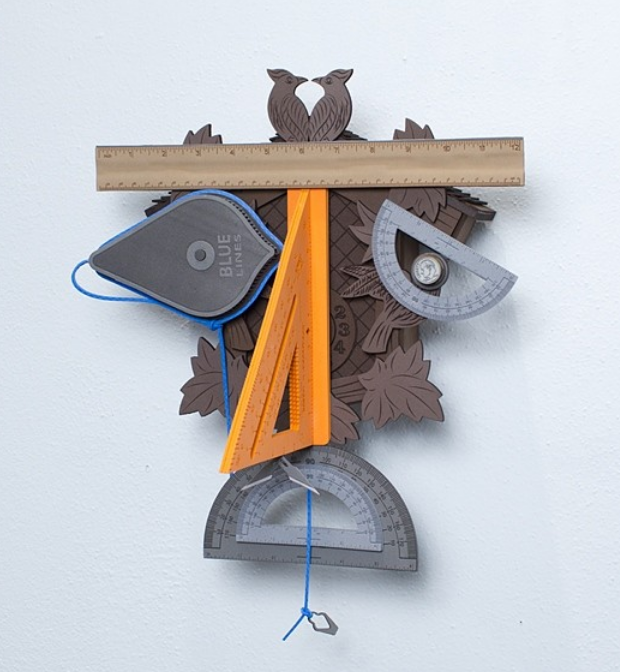 OPP:  The Clockmaker's Apprentice (2011) included 68 Golems, 5 Shoggoths and 25 Frankenstein’s monsters. All of these creations combine cuckoo clocks with building tools—scissors, protractors, levels, painter’s tape and other measuring devices. What’s different about the golems, the shoggoths and the monsters?

NS: As the work became more refined, I began to feel it lose its contrarian edge. Instead of exploring materiality I chose to focus on developing the imagery. I decided to make images of objects aware of their lowly position, made of generic and common stuff and stuck in whatever idiotic gesture I, as a capricious creator, willed them in to.

(As a side note, I realize now that I find the weeping tragedy mask the more honest and acceptable of the twined comedy/tragedy images. The comedy version, stuck forever with its painful, gaping smile is an unnerving reflection on contradiction.)

I separated the series in to three groups to delineate the structural differences of how the parts came together. First, the golems were created as one-off experiences. Simple, crude faces created as caricatures of facial gestures. Frankenstein’s Monsters were the golems taken one step further; each one is made from the pieces of former golems, cut up and recombined to create a three-dimensional version of a Surrealist’s exquisite corpse drawing. Like the eponymous coagulate in an H.P. Lovecraft story, the shoggoths were the mishmash of several sculptures fused together with little regard for structure or appearance. 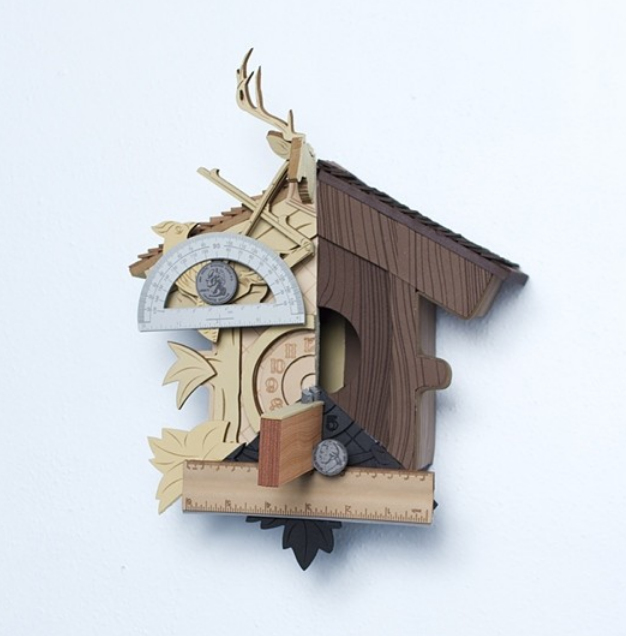 OPP: How does this series speak to the relationship between the creation and the creator?

NS: I know a number of artists who are terrible stewards of their own work, and at that time I might have been the worst. As a pragmatist storage is always an issue; it didn’t hurt that the objects were lightweight and flexible. As an indifferent parent to the completed objects I have to contend with both the physical mountain of objects I create and the complex nature of mass proliferation. As much as I feel compelled to make, I also think it’s equally important to question the hubris of creating permanent gestures. 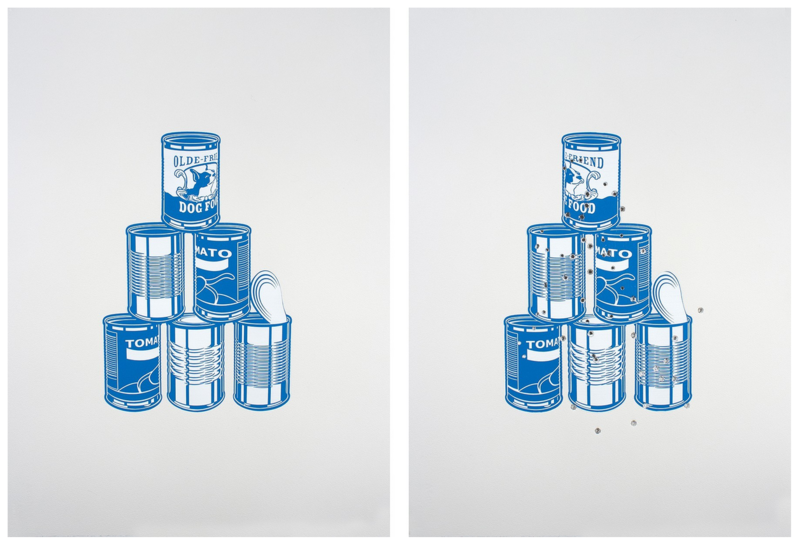 OPP: Will the Circle Be Unbroken is a series of collages made with acrylic, paper and fabric that refer to Pennsylvania Dutch hex signs. What do the hex signs mean to you and why do you render them as fabric and paint collages?

NS: The Pennsylvania Dutch hex sign, a form of folk art and magic, are emblems and motifs painted on barns and homes to promote fertility and prosperity. I think of them as a container for intentionality.

I combined the standard motifs with patterns of pride— tartans, plaids, familial patterns—and protection—fencing and camouflage. As I continued to work on these pieces, it struck me how significant images of power are, not to the weak, but to those who are insecure. 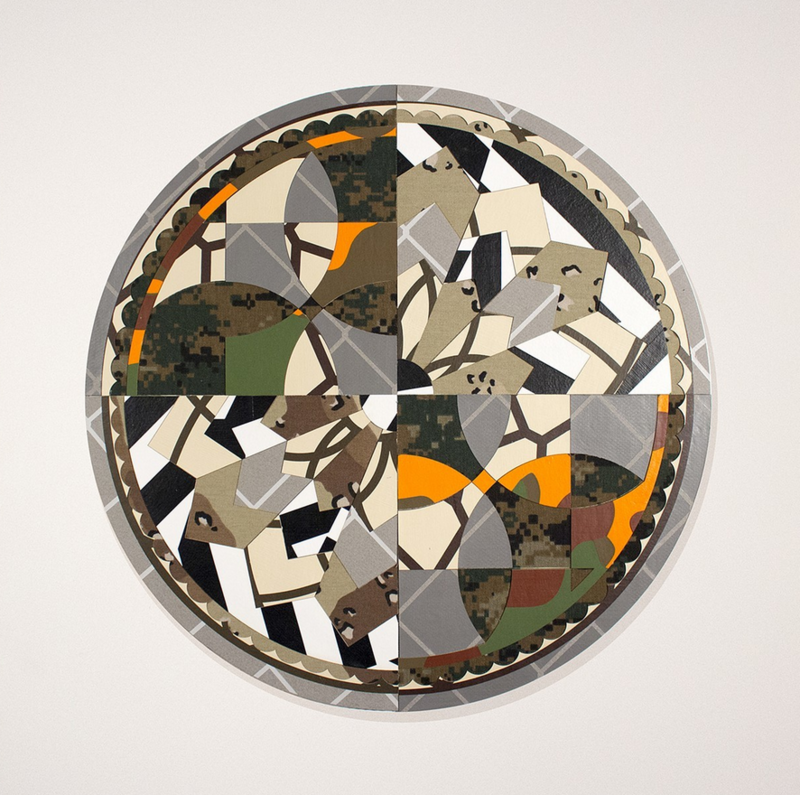 OPP: Were you thinking more about the possibility of secret symbols or pure abstraction in referencing the hex signs?

NS: Not to be too evasive, but I’m not sure I make much of a difference between pure abstraction and secret symbolism. Both are imbued with a creator’s will and, regardless of how succinct they are, it can be damn difficult to decode them without pre-knowledge. 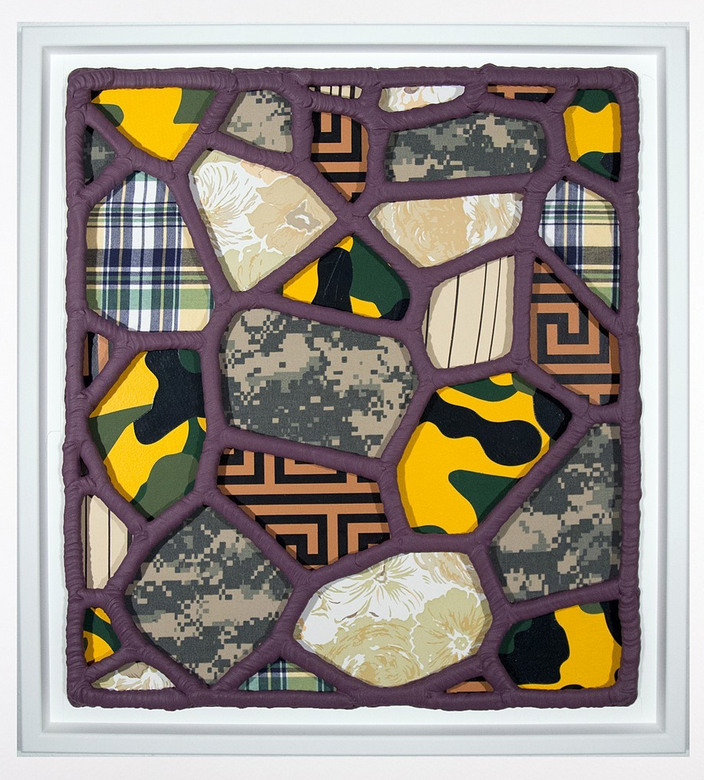 OPP: Your newest series Am I Born to Die initially brought to mind the divided lunch trays I used to eat from at public schools. Is this an intentional reference?

NS: Not an intended reference, but I think the logic is sound and gets to the secret heart of the work—the maturity of a holistic meal shouted down by an impetuous child demanding to keep the peas out of their mashed potatoes.

OPP: What does this series do with pattern and its pride and protection connotations that the hex signs didn’t?

NS: I have a strong belief that effective works of art avoid the need to decipher what the artist intends for it to be about and instead tend to wear their tone of voice on their sleeve.

Forcing myself to continue to cultivate the metaphor of the hex sign began to feel insincere, the constraints of the metaphor were overbearing, and in my mind its symbolic power had started to wane.

It’s my hope that the new works, in their state of tenuous integration, more openly complicate the relationship between individuality and collectivism, pride and prejudice, protection and insecurity. Unmoored from the restraints of the hex signs, the new work can evoke a broader range of contradictions of compartmentalization inherent in rubble masonry, stained glass, malignant cell walls, and even lunch trays. 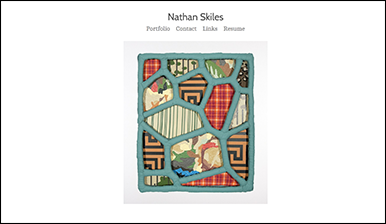