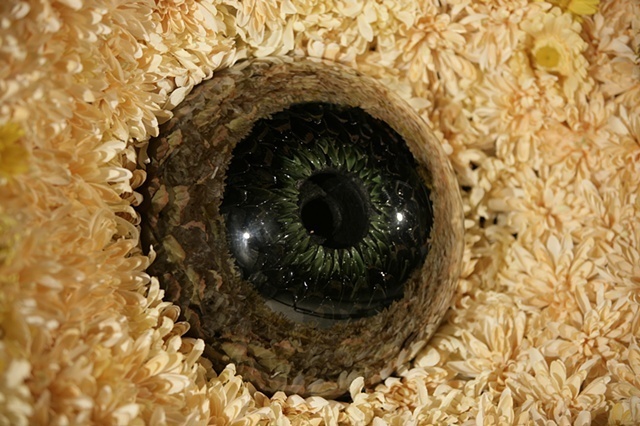 OtherPeoplesPixels: Your work feels both man-made and organic at the same time. The craft materials and discarded domestic elements remind us that we are dealing with manufactured goods, while the forms those materials take suggest that these sculptures have grown organically. This paradox leads me to wonder about your process. Do you have plan or is the process more instinctual?

Montgomery Perry Smith: Most of my pieces have been planned out and sketched several times before they are finished. I’ll collect many objects that interest me and arrange them in my studio, then sketch and arrange and sketch.  It is a nice way for me to work, because some of my pieces take forever to complete. Along the way I will find new things that interest me, or months later I’ll look at sketches and want to expand on something that I initially wasn’t interested in.

OPP: Your material lists are comprehensive. Do audience members care about the materials and their meanings the way you do?

MPS: I like rewarding the few who choose to learn more about a piece. My work has many layers, details, and holes that require the viewer to spend more time exploring than they are probably used to. And my materials are another one of those layers. I can’t expect everyone to dedicate the time to really inspect a piece, but the ones who do are usually pleased. Being in the Fiber and Material Studies Department at School of the Art Institute of Chicago made me pay close attention to the objects I chose. I think it is important to know when you use a certain material or object it can bring very specific meanings along with it. I’m personally interested in playing with found domestic objects and materials that would traditionally be used for craft or decorations. 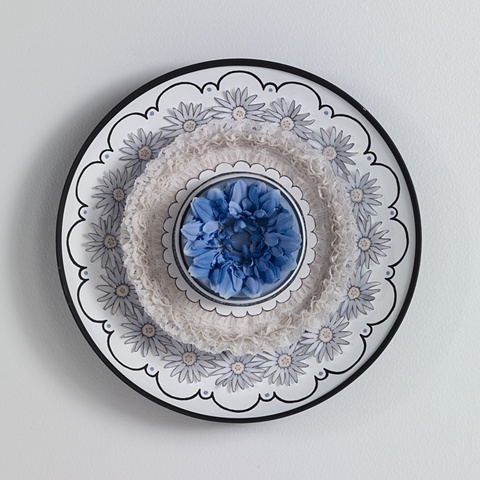 OPP:  What is it about domestic objects and craft materials that is so appealing to you?

MPS: I like how domestic objects hint at a specific way of life or use. When incorporating these objects it gives my pieces a sense of nostalgia. I think of craft materials the same way. They imply the pieces had a purpose other than being decorative. Each piece has this absence of a body or a living being to activate it.

I personally connect with these objects because they remind me of childhood.  The ceramic dishes and light fixtures bring up memories of my grandmother’s house and the hours of craft projects I would work on while visiting her. I was always fascinated by the dollhouse she had made from scratch, and I wanted to make my own. I remember secretly constructing little rooms out of cigar boxes, and hiding them, because I was convinced that little boys were not allowed to show interest in dollhouses. 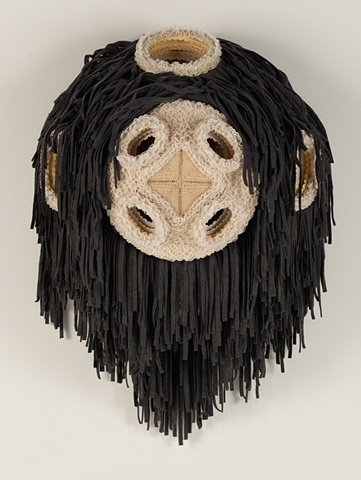 OPP: The formal language in the work (repetition of concentric circles, cascades, gaping holes, concave and convex domes, fringe, symmetry) is quite engaging, if I think of your sculptures in purely abstract terms. But there is also a sense that your sculptures are representational, but of things I’ve never seen before. Some pieces, such as Bottom Feeder (2009) and Just Like You Should (2008), remind me of Muppets. They are aliens or animals we haven’t discovered yet. Many, like Gasper, (2009), Pit Worship (2010), and Hardcore (2010), evoke Victorian memorial art. Do you think of your sculptures as abstract or as representational? What, if anything, are you memorializing?

MPS: I think of my sculptures as representational. I like creating these objects that are pulling from various sources and playing with them until they become disturbing and familiar at the same time. I’m very interested in the uncanny and the emotions it brings out in people.

I’m memorializing moments, ideas, and people of interest. Some pieces seem more like mounted trophies on a hunter’s wall, while other objects appear to have a specific purpose or ceremonial use. I try not to be too specific with the subject that is being referenced; I’m drawn to the more open and accessible pieces. But there are definitely pieces, like Gasper, that are memorializing something specific (David Carradine). 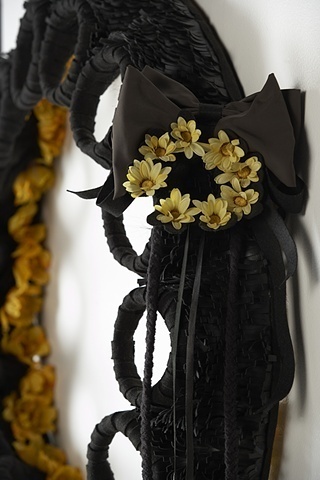 OPP: Many of your titles, like Pearl Necklace (2008), Creamy (2009), and Daisy Chain (2009) evoke sexual themes. How do your sculptures talk about sexuality without any images of bodies? Are the titles jumping off points for creating a piece, or do they come after?

MPS: The titles usually come after the piece is complete. The ideas are there throughout the whole making of the piece, but I tend to wait till the end to name them. I wouldn’t say that I don’t use images of the body. There is a definite orifice throughout my work, and it is often a representation of just that. But I like abstracting it and playing with it and bringing a new visual vocabulary to it.

OPP: I can see what you mean about the orifice, and you are definitely abstracting it in a very compelling way. Are you trying to say something specific about sexuality?

MPS: I’m interested in societies’ views on sexuality. It is a very uniting and polarizing subject, and it is something that everyone shares, in one way or another. I’m fascinated by its ability to cause euphoria and anxiety, life and death, love and hate. 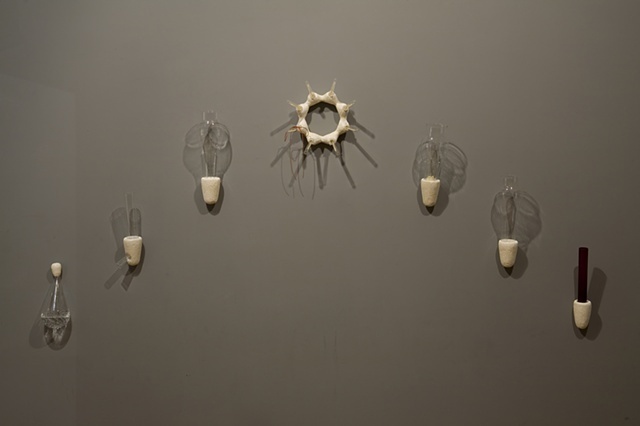 OPP: Loads and Tools (2011) from your recent threewalls show Milking (2011) includes a contextualizing narrative in the promotional materials: “two new sculptures that focus on an otherworldly relic and the tools used to milk it.” Was this the first time you offered an explanation as to the nature of your sculptures as part of the exhibition support materials? Does this represent a new direction for your work in general?

MPS: Milking was the first time I had used text along with my work, I’m still not totally sure how I feel about it. I wanted to add another level to the narrative, but in the end it seems too specific for me. I think it is more of a test than a new direction, my next show I’m letting the pieces speak for themselves.

MPS: I'm continuing to work on a new series of pieces that should show up on my website within the next couple months. I will also have my work in Flowers, the upcoming issue of Monsters and Dust. They recently won the Propeller Fund Grant to create a print edition in addition to their web release. 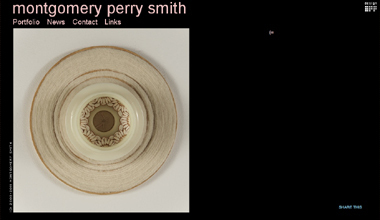