Interdisciplinary artist MICHAEL PAULUS works in video, painting drawing and sculpture. From his slow, lulling videos of repetitive phenomena to his pithy, layered drawings of the imagined skeletal systems of well-known cartoon characters, he expresses both awe at the natural world and criticism of the constant human drive to manipulate it. Michael's videos have been screened nationally in Seattle, Washington; Portland, Oregon; and Austin, Texas and internationally in Taipei, Taiwan; London, England; Banff, Canada and Basel, Switzerland. Most recently, Wind Farm was included in the Gödöllo International Nature Film Festival (2015) in Gödöllo, Hungary. Michael is currently hard at work on a collaborative, multi-media project with Glenna Cole Allee that examines "the ghostly remains of the annexed people and township from the Hanford Reach." In 2015, he exhibited work in Obsidere, curated by MicroClimate Collective in San Francisco and had a solo show called Claimed, Found and Gifted at Oranj Studio in Portland, Oregon where he lives and works.

OtherPeoplesPixels: You work in drawing, sculpture, painting and video. What’s the underlying thread tying together all your work in various media?

Michael Paulus: I’ve never had a very disciplined studio practice, investing in technique and familiarity with a chosen medium. I’m generally restlessness with sticking with one medium. I do recall very much my foundations professor Greg Skinner at Cornish College in Seattle impressing upon me to “choose the medium to suit the vision, not the other way around.” He was a conceptual artist coming out of the post-minimalist 60s.  Actually, I came back to visual art about 15 years ago after burning out on the two-dimensional image and the limitations of illusion, which brought me to sculpture after a couple-year-long hiatus, during which I was more concerned with creating audio compositions.

The mediums do differ throughout, and the work tends to be motivated by a respect of this natural world, as well as a critical view of the awkward attempts we humans make to define and control it. 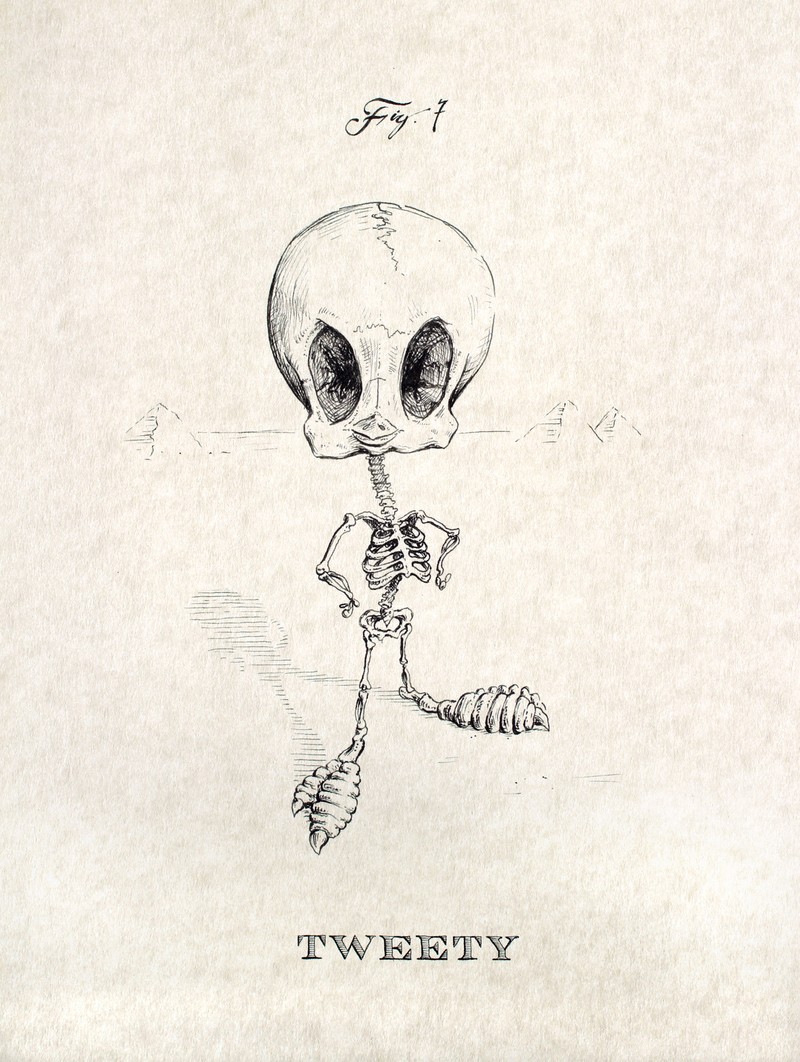 OPP: You’ve drawn the imagined skeletons of 22 well-known cartoon characters in Character Study. Does personal fandom play into how you selected your subjects or is it more about the bodies themselves? Can you also talk a bit about the urge to deconstruct childhood icons?

MP: The cartoon skeletons were really an exploration and experiment to deconstruct iconic figures from my childhood. In their day, these characters were stand-ins and figureheads for many. Actually, I never had much interest in comics, and I really do not like the act of drawing, so that project was a bit of a challenge for me. I had the notion to do somewhat literal drawings of their very physical bodies (skeletons in this case) in a kind of medical or devinci-esque rendition and apply a hinged, translucent digital overlay of the flat and colorful cartoon image over the top, intentionally retaining the pixilation and artifacts that came with them when pulling the figures off internet searches. The intent was to have an onion skinning, transparent layer with the drawing underneath, like the anatomy books I paged through as a youngster with the various Mylar layers of circulatory, nervous, cardiovascular systems, till finally one is left with an opaque skeletal system, which cannot be denied.

I chose Charlie Brown and Hello Kitty first, as they were both very iconic and grotesquely distorted from the original human or animal from which they were derived. For the rest of the series I did the same. I retained the general skeletal system of whatever their actual origins were, regardless of how anthropomorphically derivative of a cutesy human they were with speaking mouths and huge eye sockets.

OPP: It seems you’ve been focusing on video work in the last few years. Videos like Vertical Migration (2014), Wind Farm (2014) and Dip (2013) all have a slow, contemplative quality. To me, they are all about the value of slowing down to look at what we might be missing and the beauty of cyclical repetition. Earlier videos like The Journal of John Magillicutty or: The Time Afforded To One Lucky Enough To Be Living Comfortably (2006) and The Preoccupied Occupant (2009) have all those same qualities plus humor and a little absurdity. Thoughts?

MP: Well, I suppose I tend to look at this life a bit distanced. Both critical and amazed at what it is all about.  And I certainly like combining contrasts and the marriage of opposing elements,  kind of a ‘more than the sum of the parts’ kind of thing.

So, yes, there are some outright absurd and comical elements in contrast to and as a kind of veil over the profound. It’s possible that I’m self-consciously masking spiritual leanings I have or constructing a retainer in case I stray too far. I grew up with contrasts in a family of Catholic faith but where science and logic was king. I am conscious of this instinct to manipulate and control the world around us: designed dog breeds, damned rivers, foie gras, binary codes. The cyclical repetition is a result of this constant. I suppose, it’s a kind of a meditative response in the face of absurdity or incomprehension.

General paranoia in our culture and surveillance flavor my recent work. I am currently working on a couple projects examining the paranoid undercurrent. One is a small but ongoing attempt to finish a video where I am matching shot for shot the opening sequence from the ubiquitous movie The Shining. I am matching the locations and the blocking of the movie’s ominous, helicopter eye in the sky intro sequence as it looks down, following the subjects as they wind up the mountain. . . but in this case looking back up at it.

Another very multi-media project is working with artist Glenna Cole Allee on an interactive piece that examines the ghostly remains of the annexed people and township from the Hanford Reach in what became The Manhattan Project’s plutonium-producing mega-site in the scablands of Washington state—now also the notorious Superfund cleanup site. It’s a large undertaking incorporating massive stills, video, projected audio elements spoken from natives and some sculptural constructions.

OPP: Please tell us about your most recent body of work Claimed, Found and Gifted. What’s the significance of the blades of grass your drawn versions of the hands on the Lincoln Memorial? Why have you revisited Abraham Lincoln again after a decade?

MP: Well, I was offered an opportunity to exhibit some new work along with existing pieces so I decided to explore where my head was at 10 years prior in a show I did titled The Stars and Abraham. I found myself a bit perplexed in how I had merged the myth and popular vestige of Abraham Lincoln with astrology and its arbitrary symbolism. More to the point, of how they relate in Americana folklore and institutions for the faithful believers in both. I certainly held Mr. Lincoln in high regard since childhood for his virtue and fortitude. Most of this was drilled into children in grade school it seems.

Honestly, it was a bit of an awkward exercise with that association between the two; comparing Lincoln’s vacillation between right and wrong, this and that with the union and slavery. Anyways, I borrowed from Lincoln again. In addition to the cascading stovepipe hats upon pretzels and hotdogs, I inserted blades of very suburban, green grass clenched in the Lincoln memorial hands—just more Americana from a child’s backyard looking up at the sky. And, as a counterpoint to the somewhat austere and critical renditions involving Abraham, I created large, rag-paper fans in full, saturated, color from fabric dye as a celebration of his sensual and feminine counterpart, Mary Todd. . . or, my creation of her into this complement to him. 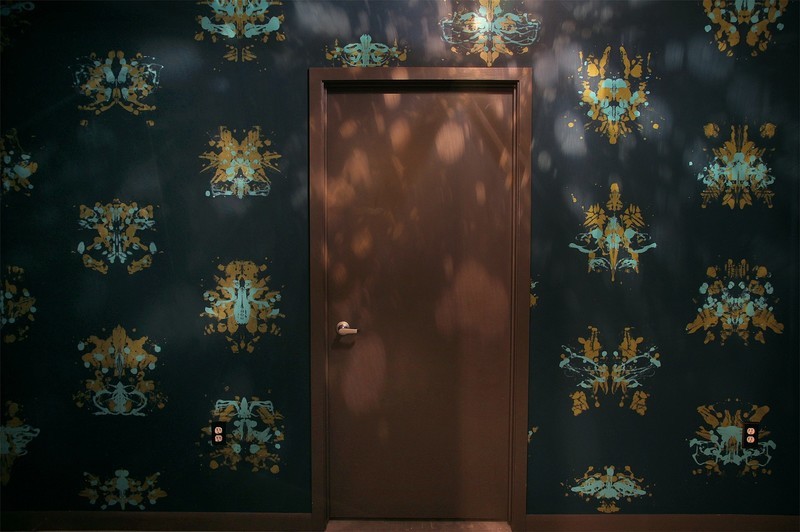 OPP: Your painted walls resemble wallpaper in their repeated patterns of flowers and Rorschach blots, but each image is uniquely hand painting. Some are the interiors of private homes; others are in bars and restaurants. Did these folks seek you out or did you bid for the jobs? Can you offer any practical advice for artists who want to do commissioned work?

MP: I have been doing work like this for a while. I first began with commercial work in a more corporate environment, designing and building permanent art installations for the offices and conference rooms of a large company.  The patterned “wall paper” painting began really with Angle Face bar in Portland, Oregon, owned by John Taboada and Giovanna Parolari. It’s kind of a tweak on the current trend of wallpaper and repeat patterns, but with an application by hand so that each motif is unique.

Local designer Trish Grantham conceived the Rorschach blots. The Rorschach blot-inspired work I particularly like in that the context—often a residence—plays into the reception of the work. One peripherally ‘feels’ a delicate pattern of flowers surrounding you like conventional wallpaper when entering a space and then, once taking a closer look…

My fine art practice and discipline as I said earlier is lacking at times and I consider myself aligned with a design instinct more than I would have appreciated when I was younger. Do I actively search out paid work like this? Not so much. That is a great benefit of the World Wide Web really, in that it is very helpful for individuals dealing in visual images. 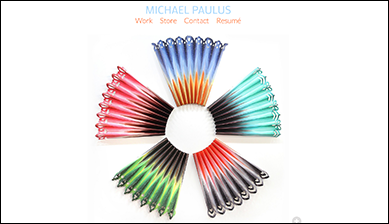