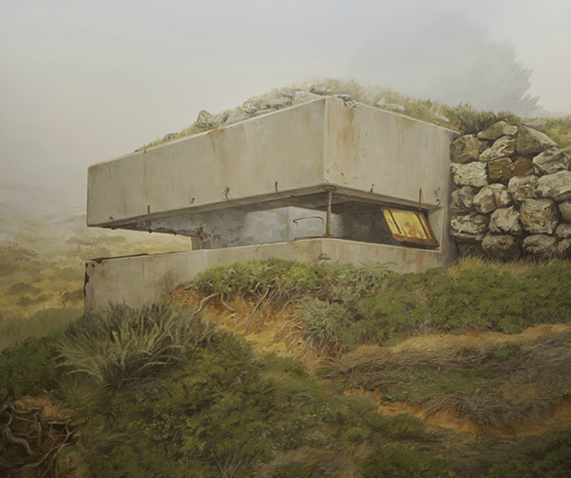 BCS, FT-FC, H88
2010
Oil on canvas
60"x 72"MICHAEL HALL’s paintings, sculpture and video are concerned with the contemporary reinterpretation of history and historical artifacts. He examines the struggle between control and protection, nostalgia and the mythic image, often using animals and objects as symbols for emotional experiences. In 2010, Hall was awarded a Joan Mitchell Foundation Painters and Sculptors Grant. He has an upcoming exhibition (Fall 2012) at Patricia Sweetow Gallery in San Francisco, CA, where he lives and teaches.OtherPeoplesPixels: In 2009, you were in residence at the Headlands Center for the Arts in Marin, CA. Reclamation, the body of work that emerged, examines the now defunct military bunkers which dot the coastline in painting, sculpture and video. Tell us a little about how the project developed and about how the bunkers play into your interest in "the contemporary reinterpretation of history and historical artifacts."Michael Hall: When I was at the Headlands I was looking for a way to bring together two divergent influences in my life—art and the military. I was born into a military family and grew up on bases all over the world. I had been exploring the ideas of protection and control in my work but wanted to shift to dealing explicitly with the military. I do a lot of research into my subject matter. I began to read about the history of these sites, their function, their decommissioning, etc. At first, I constructed a replica of one of the structures and made a video where the bunkers were disappearing from the landscape. The paintings followed. The tradition of coastal landscape painting depicts a peaceful, serene and undisturbed landscape, but I wanted to inject the reality of the bunkers and their forgotten histories into those idyllic spaces. What struck me as I hiked around the Headlands and the coast was how these structures had just been left to rot and were largely forgotten about (though there are a few that have been restored and are run by the NPS.) Scattered about this picturesque California coastal landscape were these traces of two world wars, impending threat and the history of a complicated military influence. I strongly believe that if we ignore our past we wind up repeating it. I also wanted to highlight the importance of Nature in their history. These man made structures, built both in an effort to protect people and its land, will ultimately succumb to the elements, and the land will reclaim and redistribute its parts. Given time, it will be erased, and its history, if unattended, will be forgotten. 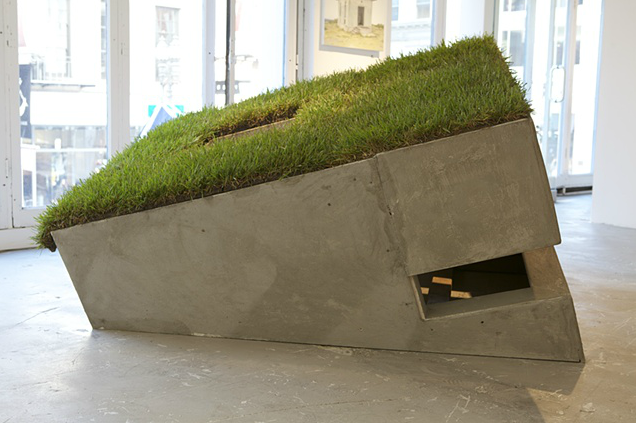 OPP: Several bodies of work, such as Ephemera, This is Not Your Beautiful Life, and Search Results, not only use photographs and digital images as source material for painting, but meditate on photographs and digital images as historical artifacts. I'm very interested in the way your work gives the personal history associated with photos equal footing with the collective history associated with the bunkers. It's really smart and complicates how we think about the discarded and the forgotten. Have you ever exhibited these bodies of work together?MH: I’ve never shown them together, but I’m very glad you drew that conclusion. Most of my work is concerned with history and it’s collision with the contemporary. With the photo-based work I’ve collected old photos and the ephemera, like processing envelopes, for years. I find them at paper sales, yard sales, junk-yards and just on the street. Like the bunkers, they are often discarded and forgotten, but as you pointed out, they are far more personal in nature. I get lost in thinking about these discarded memories sometimes, imagining the lives of the people in the photos: where they are now and how whole family albums end up in the trash. But there is also a larger significance to these photos and ephemera like the processing envelopes. They are cultural touch-points. So much can be revealed about a time or location by a single snapshot or the graphics on a local developers envelope. Despite their small and personal scale they can be monumental—more than just anthropological. Recently, I’ve been thinking a lot about them as the physical objects—as relics, in a way. Chemical based photography, and to some extent printed photography, is becoming more artisan, boutique and rare—which I think is an exciting moment in the history of photography. However the antique photo, the snapshot— even those from the early 90’s—are still physically with us. They are huddled in piles at junk yards and antique paper sales or they are carefully kept by family members. I’m interested in these objects and the images and questions they bring up. Is it nostalgia, anthropology, an archive? Is it an ongoing dialogue between painting and photography? Yes. 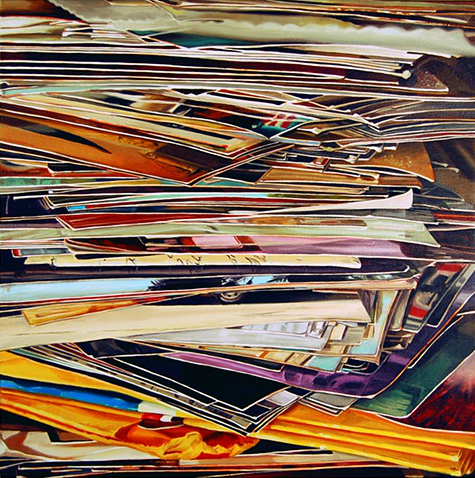 How they stack up
2009
Oil on canvas
18" x 18" OPP: "Bete comme un peintre," the title of one body of work based on photos, is a quote from Duchamp, right? Could you translate it for us and talk about why you chose this title?MH: The basic translation is “Stupid like a painter.” Duchamp threw that gauntlet down in his pursuit of redefining what art could be—trying to remove the authority and hierarchy of painting in the Arts. As one who identifies largely as a painter, I’m thankful for this. It freed up painting in a lot of ways. Many were understandably insulted by this phrase (some continue to be), but it also became a badge of honor for some painters that gave importance to the emotional or intuitive response in painting. At one point, I identified with that, but when I titled that show I was also feeling very self-conscious, having just come out of graduate school. My head was full of theory and justifications, and here I was painting from my collection of old photos. It was a way to acknowledge that self-consciousness and allow myself to paint from what I was intuitively drawn to. Since that show, I’ve come to engage in a close relationship with photography. I take photos and video and use it as a tool but have found it to be a compelling subject matter for painting. There has always been a back and forth between painting and photography since photography first liberated painting from being a tool of replication. I think there is an amazing ongoing dialogue in its historical battles and dependence and the freedom both mediums share now. 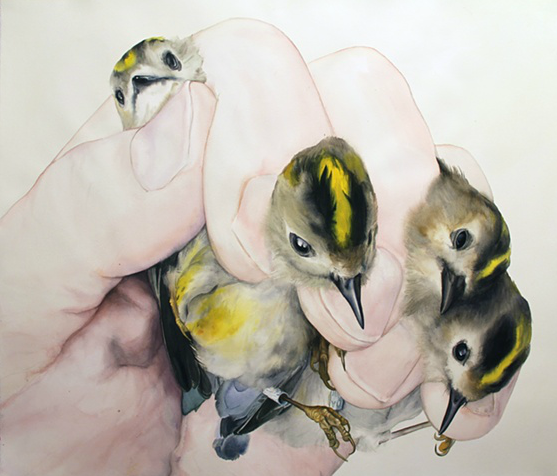 Held Together
2011
Watercolor on paper
32"x 37.5" OPP: In Embattled, a series of watercolors of humans battling animals or animals battling each other, and Banded, a series of watercolors of the process of banding birds for tracking, you explore the "dynamics of protection and control." This is a recurring theme in your work. I'd like to hear more about how the animals in these paintings become allegories for human emotional experiences.MH: There’s a long history of giving animals anthropomorphic qualities. I’ve always been drawn to it, because it allows you a way of approaching a subject without over-explaining it. The image can become metaphorical and open. I’ve spent a lot of time observing animals. I get transfixed by them. I always had animals like dogs, horses and birds growing up and went regularly to zoos, aquariums and animal parks. Maybe because of that, I anthropomorphize human behavior with my observed behavior of animals as well. I think there is a lot of wisdom in the animal kingdom. Sometimes we just have to reframe it. 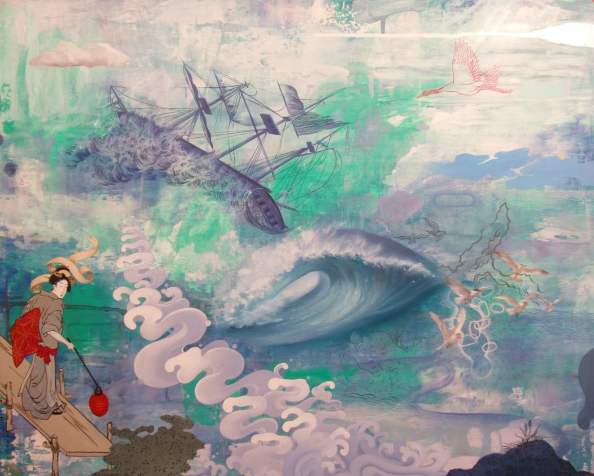 When the Sea Surrounds
2005
Oil on panel
24"x 30"OPP: On your website, you have an archive section of older work that is visually quite different from the work you've made in the last 5-6 years. You acknowledge "Often things have a way of coming back around. Others are strong works, but from a train of thought that will not be pursued again. These works took me somewhere though and that should not be forgotten." I couldn't agree more. Could you talk about some of the themes or images that had a way of coming back around?MH: It’s funny because I had forgotten about that section of my site, so I recently looked back over it. I think there are a lot of similar things going on, just a different approach. I was steeped in mythology when I was making that work and heavily influenced by ancient, esoteric text and imagery like Masonic symbols, Aesop’s Fabels, the I Ching, early Christian symbology, Tibetean tangka paintng, etc. What I came to realize was that I was overlaying too much and creating overly complicated fields of imagery that sometimes made it impenetrable for the viewer. They were more successful when they were simple and direct. The interest in history is still there though, but I’m really enjoying the sense of the mythic in that work now. 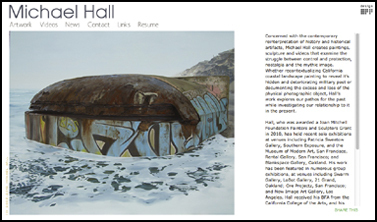