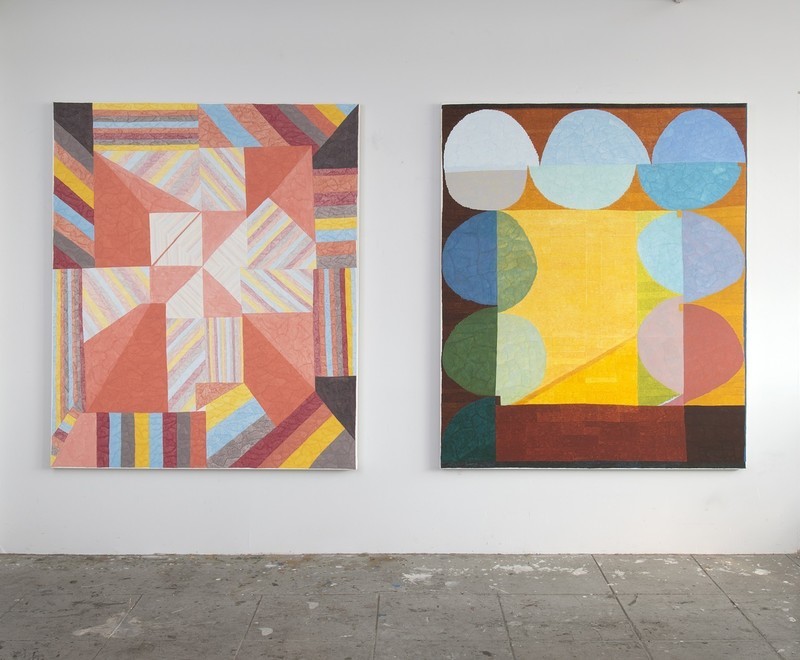 Luxor at Dawn and Bungalow

MATT PHILLIPS expertly wields color, line and texture in mid-sized paintings and smaller works on paper. Drawing a clear parallel between Geometric Abstraction in painting and in quilting, he divides the rectangle into endlessly-surprising, smaller shapes. He renders the repeated triangles, rectangular bars, half circles and curved lines in varying colors with repetitive, overlapping brushstrokes, balancing the importance of each mark with the overall composition. Matt earned a BA in Art/Art History from Hampshire College (Amherst, Massachusetts) in 2001 and an MFA in Painting from Boston University in 2007. He was a McDowell Colony fellow in February 2016 and has had solo exhibitions at Cerasoli Gallery (Los Angeles, 2009), Steven Harvey Fine Arts Projects (New York, 2013 and 2016), Branch Gallery (North Adams, Massachusetts, 2013), Kate Alkarni Gallery (Seattle, 2013) and the University of Maine Museum of Art (Bangor, 2014). His work was recently included in Summerzcool: A Group Exhibition at David Shelton Gallery in Houston. In September 2016, his work will be included in a three-person show, also featuring the work of Austin Eddy and Benjamin Edminston, at Charlotte Fogh Gallery in Denmark and in October 2016, his solo show Yard Sale will open at Devening Projects in Chicago. Matt is a professor of art at Fashion Institute of Technology in New York City and lives in Brooklyn.

OtherPeoplesPixels: Your recent paintings evoke quilts, especially the Gee’s Bend Quilts, which are often asymmetrical and slightly irregular. Are these an influence for you?

Matt Phillips: The Quilts of Gee’s Bend have been very important to my relationship with painting. They share so many affinities with geometric abstraction and synthetic cubism. I love the spontaneity of the quilts’ imagery and the resourcefulness of the artists. Quilts and textiles teeter on the edge between image and object. Many of the Gee’s Bends quilts have such an incredible and varied physical surface found in well worn clothing and old denim. It is a kind of imagery that is generated by the exchange between the body and a swatch of fabric—a process not unlike the act of painting. I am also interested in how, as a sculptural object, fabric gives form to some of the more invisible forces of the world such as gravity. 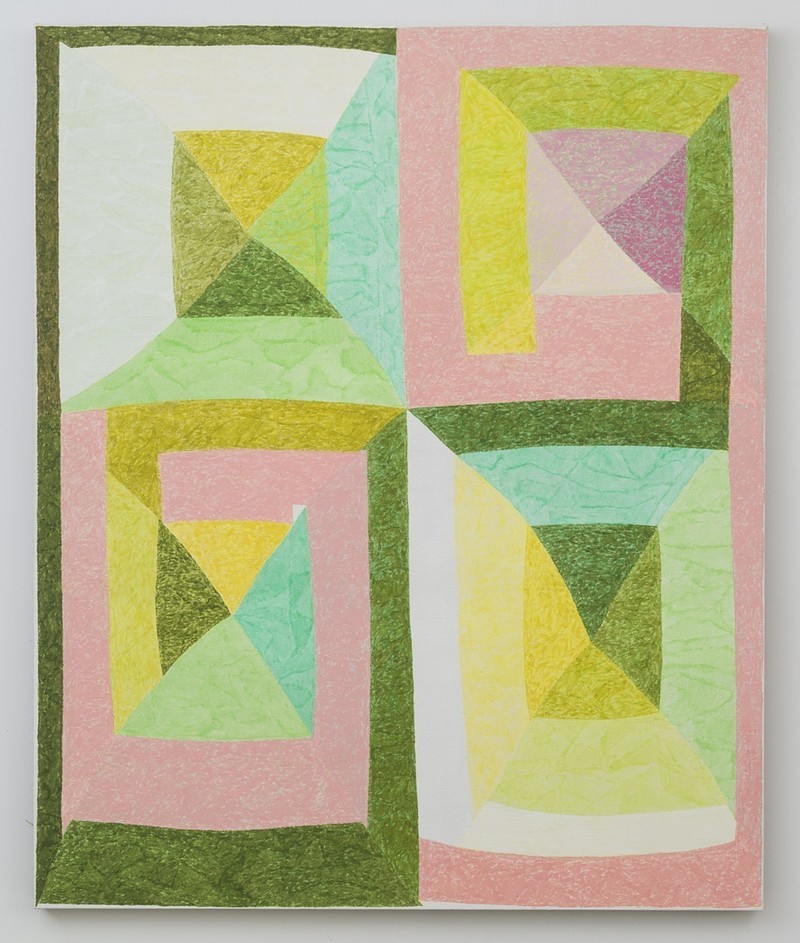 OPP: I’ve noticed quite a few contemporary painters referencing both quilting and weaving in the last few years. What’s really interesting about abstraction in these textile forms is that it grows directly out of the process. In traditional quilting, one cuts just squares and rectangles from different fabrics and rearranges them using the grid to make other shapes. It’s a process of building up into a rectangle, but the rectangle doesn’t exist at the beginning. Painting, on the other hand, seems to be partly about dividing up the clearly defined rectangle. Your thoughts?

MP: I feel like the way that I approach my paintings has certain similarities with the process you just described. The painted image ultimately has to exist within the edges delineated by the support. In much of my recent work, though, the pictures don’t entirely fill the rectangle. Instead, the image form either extends towards or recoils from the edge of the canvas, sometimes both at once. 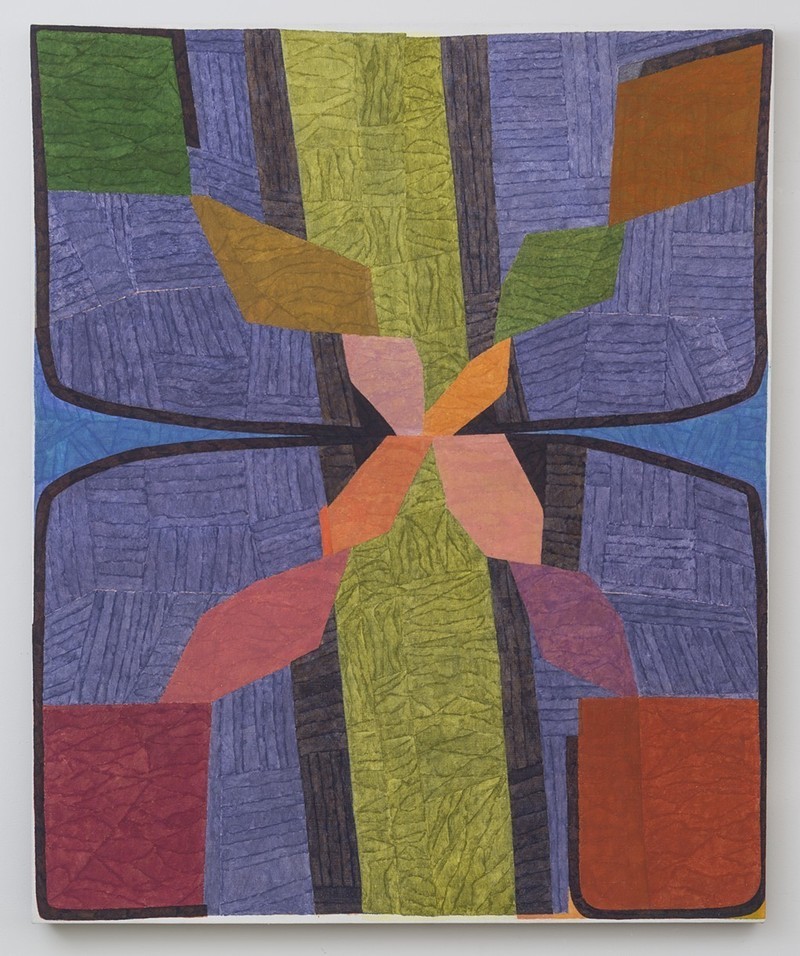 OPP: Can you talk about the texture within your fields of color? It reminds me of coloring a large expanse of space with a very fine-tipped marker. The hand is really present. Is this effect something you sought to create or a happy accident that emerged from your process?

MP: This texture comes primarily from the paint that I use which is made by dispersing raw pigment into a silica binder. Making my own paint naturally creates inconsistencies in the opacity and transparency of the color. I also paint on a course linen using small brushes. The result is that the viewer can see many discreet passages of the brush within the larger flat areas of color. The place where two marks overlap create a darker seam that is slightly more opaque. Lately, I have been really interested in how this process creates a secondary illusionistic space within my paintings. It appears almost as if someone took the completed painting, crumpled it up, and then tried their best to flatten it back out. I remember turning in a lot of homework in a similar condition as a younger child. 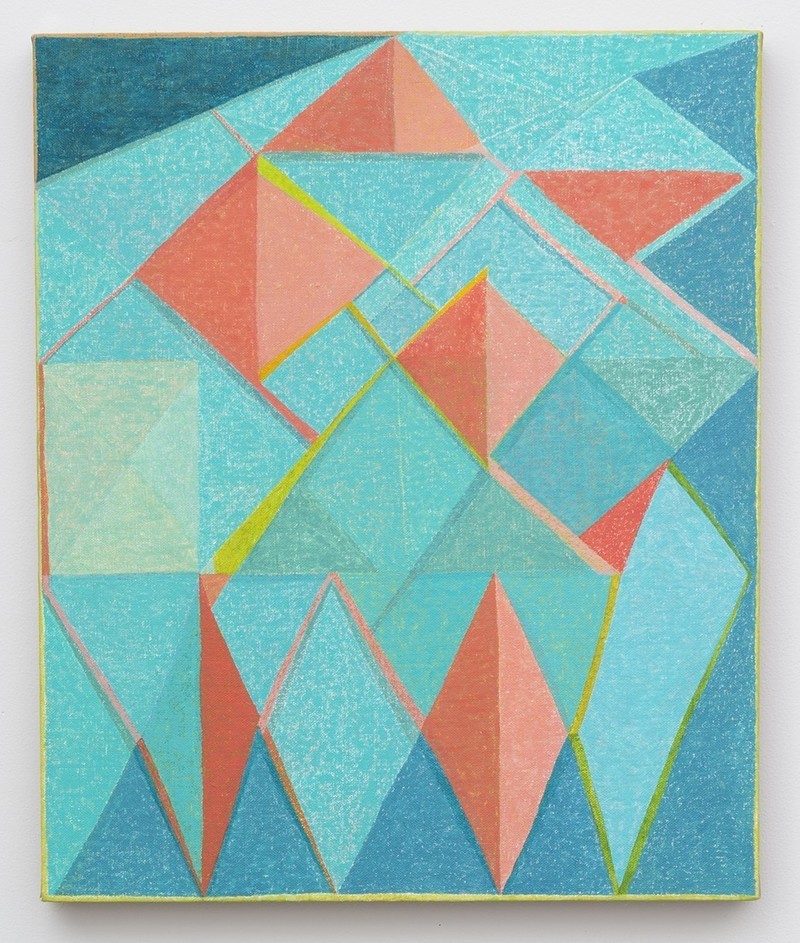 OPP: In 2015, you translated Belay (2013) into a ceramic tile mosaic called Ascent. This translation really highlights the texture in your paintings in a new way. Did you execute the mosaic yourself or just lend the design? How do you feel about the translation after the fact?

MP: This work was a commission that I received from the New York City Public Art for Public Schools Program and installed in PS106, an elementary school in the Bronx. I collaborated with a great mosaic artist name Stephen Miotto. We worked together to find a way to translate some of the material issues I just described into tile. It was a great back and forth process as we tried to use hard pieces of ceramic tile to describe the way that wet paint looks. The school itself is designed in such a way that the youngest children are on the ground floor and the oldest children are on the third floor of the building. I wanted to try and make an image that somehow marked the student’s process of vertically climbing through the school as they learn and advance through the different grades. I also like that the work, like a ruler, consists of regular parallel stripes. My hope is that the students actually use these line as a tool to measure how they grow taller while attending the school. 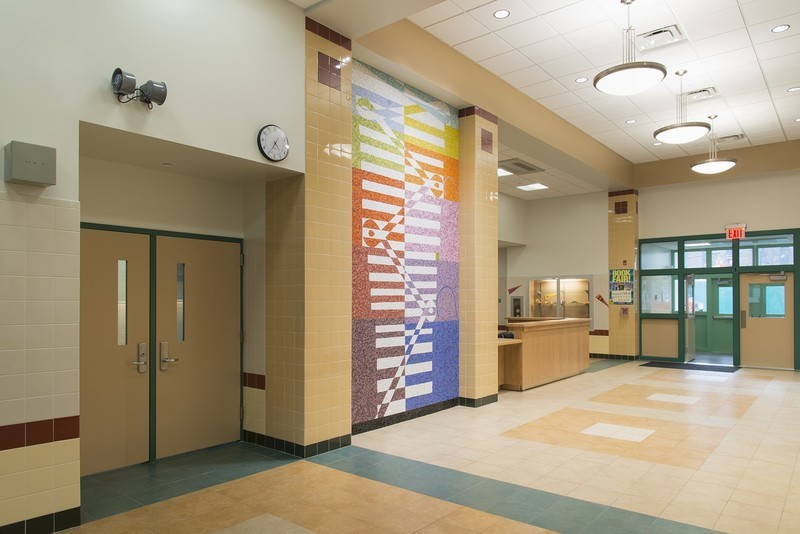 OPP: I’ve noticed a few recurring compositional motifs. House of Hands (2013), The Well at the Watering Hole (2014), Campfire by the Comfort Inn (2015) and Arboretum (2015) all have a figure-ground relationship, while simultaneously reading as pieced quilts. I see stacked boxes, stairs, mountains or buildings against a backdrop of blue sky. Can you talk about repetition of compositions and forms in your work from a process point of view?

MP: A lot of my works are built upon similar compositional structures or divisions of the rectangle. I like the idea that two things can have a similar point of origin but end up having two totally different conclusions. Those works you mention present the viewer with architectural forms. I think that such archetypal forms are a way I try and entice a deeper relationship to the picture on the part of the viewer—to get one’s eyes to pull their body through the picture plane. 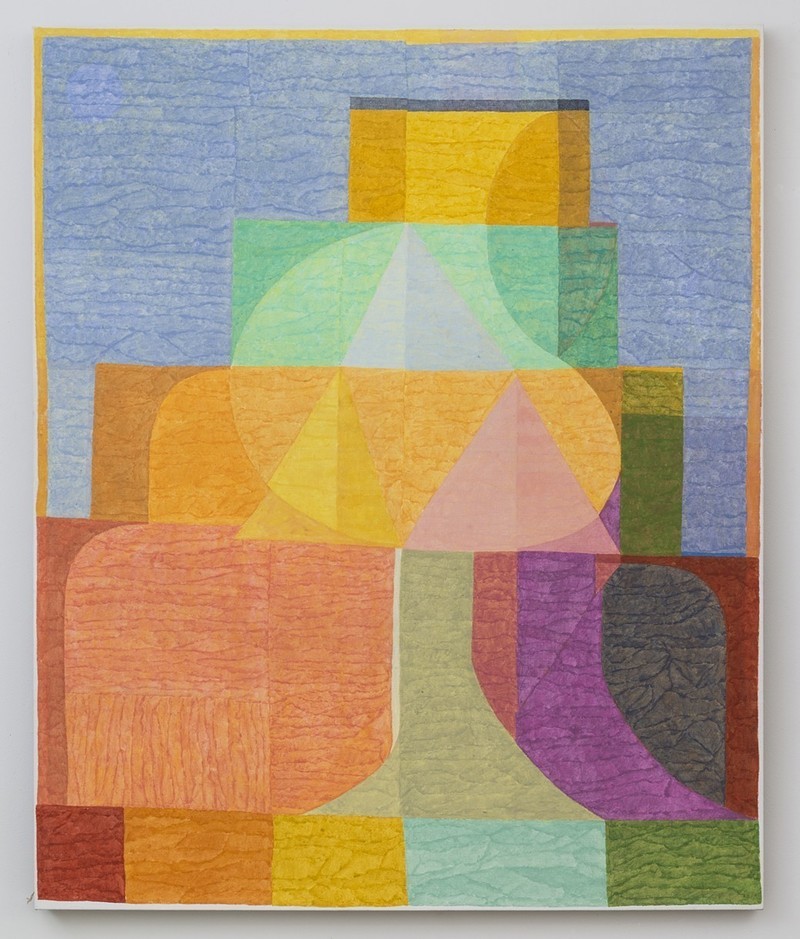 OPP: What’s your experience like when painting these works with similar origin points? Do you long to paint that form again or does it surprise you?

MP: It really happens both ways. Sometimes I make a painting and then later feel compelled to revisit it through successive pieces. For example, I may want to see the picture at a different scale, or develop a new idea about light or color in relation to the original image. At other times though, I will just be following a painting wherever it takes me and I’ll end up finding out that there is some unfinished business with regard to a certain form or motif. The four paintings that you just mentioned were made over two years. There were times when each one of those paintings had drifted into really different territory. The final four works ultimately returned to this related motif of stacked blocks, yet each one has its own distinct and winding path to this shared commonality - I think this gives each painting its own unique voice and story. 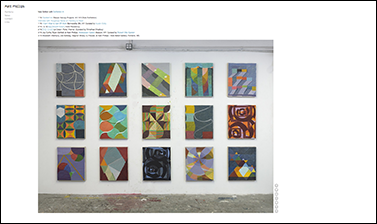