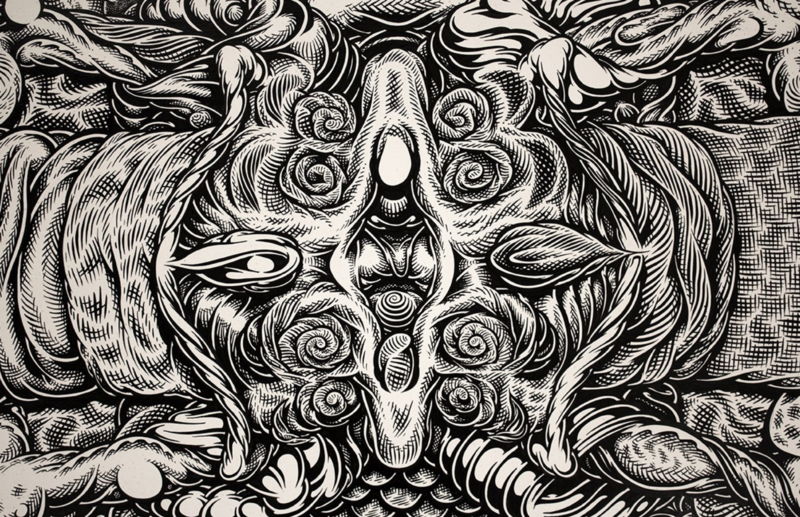 MARK DEAN VECA’s paintings and immersive, temporary installations are bold, biomorphic worlds. Carefully balancing the sacred and the profane, he renders mass media imagery in a drawing style that adds organic movement to the usually flat graphics of recognizable cartoon characters. The skin and clothes of Mickey Mouse, Uncle Pennybags and Tony the Tiger seem to writhe with maggots, billow like smoke and drip like slobber, semen or pus—not to mention random eyeballs. Yet, in spite of all this bodily grossness, the lines are sleek and elegant. Mark earned his BFA at Otis Art Institute in Los Angeles. He has received fellowships from New York Foundation for the Arts, Lower East Side Printshop and the Pollack Krasner Foundation. His long exhibition record includes solo shows at San Jose Museum of Art (2012), Site:Lab in Grand Rapids, Michigan (2015), Western Project in Los Angeles (2013 and 2014), and Azusa Pacific University in California (2016). Upcoming shows include the group exhibition LA Painting: Formalism to Street Art at Bruno David Gallery in St. Louis, which opens on September 2, 2018 and a solo exhibition of Mark’s prints and posters at Agent Ink Gallery in Santa Rosa, CA, which opens on September 16, 2017. Mark lives and works in Los Angeles.

OtherPeoplesPixels: You have a signature style, which I would describe as “intestinal line work or visceral chaos organized into contained, recognizable forms.”  Firstly, how do you respond to my description?

Mark Dean Veca: Yeah that's a pretty clinical and concise description of what I've been doing in my work for a while now. People do seem to latch on to the intestinal aspect, but there's a lot more going on. It’s a kind of biomorphic abstraction that references all of the biological systems, not just the digestive. 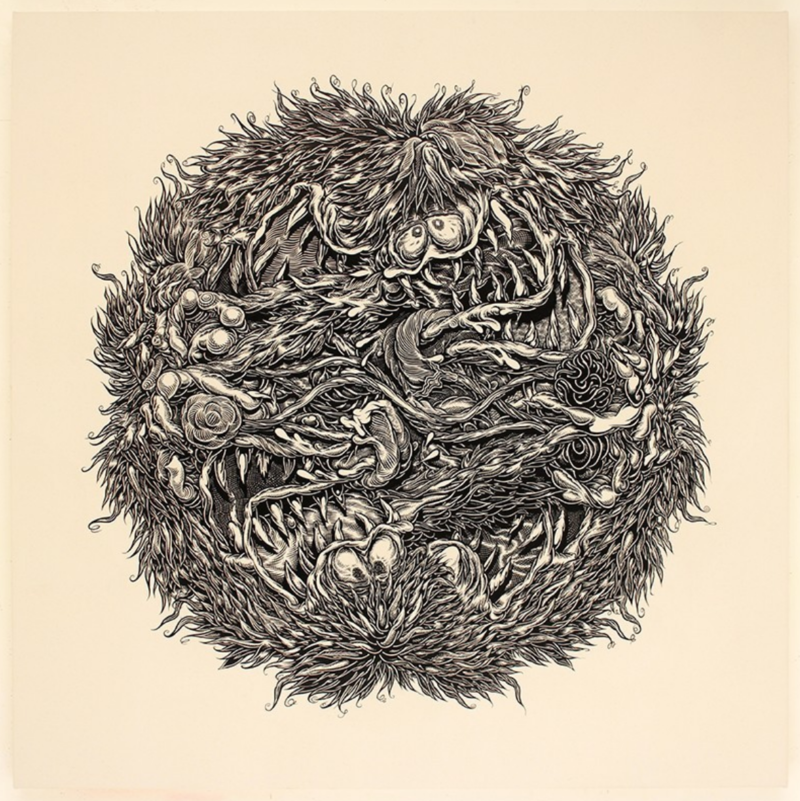 OPP: Secondly, is it a style that you’ve consciously cultivated, part of an existing drawing lineage or simply the way you’ve drawn since you were a kid?

MDV: It's just something that developed and evolved over time. I don't think I ever necessarily tried to pursue it or reject the idea. One of the many ways I learned to draw as a kid was copying from comic books, and I was always attracted to the more organic forms rather than geometric. Later in my career I made a conscious decision to explore the visual vocabulary of cartoons and to speak in that vernacular. 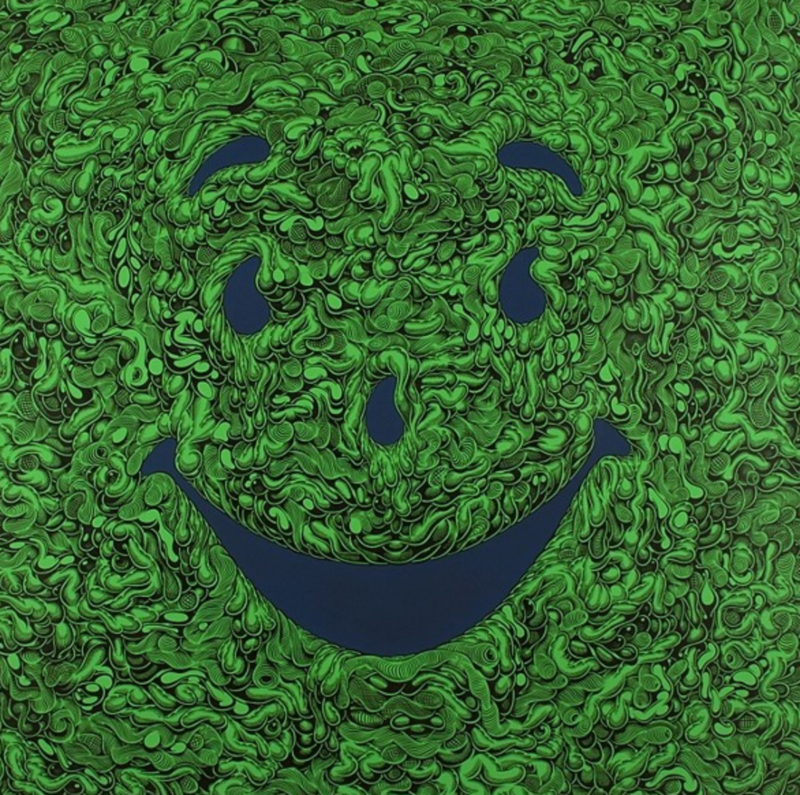 OPP: Tell us about the commercial logos and cartoon characters you choose to render this way. What do they have in common across your body of work? Are your choices driven by fandom and/or critique?

MDV: The found images in my work are always carefully chosen, never random. I use an idiosyncratic set of criteria to choose images that are personal as well as universal, and that serve the needs of the particular piece I'm working on. Very often they are simultaneously celebratory as well as critical. For example in Pony Show (2015) I painted a corrupted version the Ford Mustang logo on the exterior of a former auto repair shop in a work that celebrates and critiques American Car Culture. My first car was a 1965 Mustang which imbues the logo with sentimental value to me personally, but it's also universally recognized and has religious connotations via its cruciform shape. In other works, like Natch (2016), I've chosen an iconic image from popular culture (R. Crumb's Mr. Natural) and manipulated it into a baroque kaleidoscopic composition within which to improvise my particular brand of mark-making. I think of it as a celebratory mash-up of genres that also draws upon the psychedlic culture of my youth in the Bay Area of the 60s and 70s. 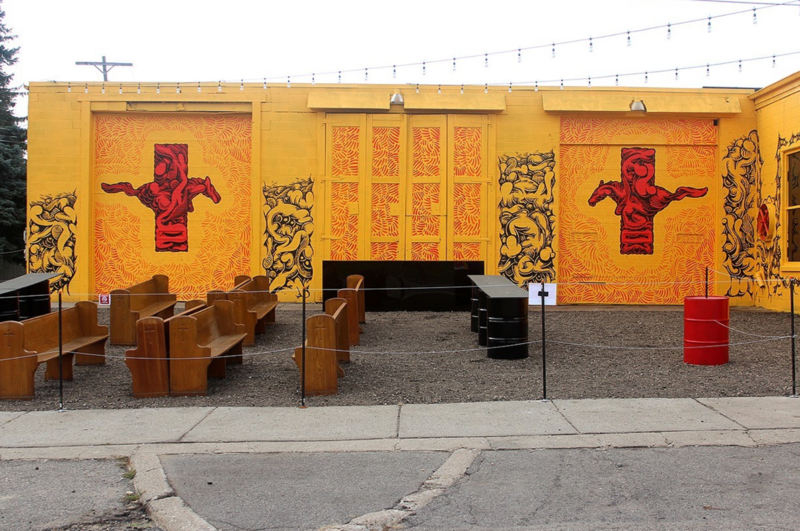 OPP: I’m really interested in the Toile de Jouy paintings like Klusterfuck (2002), West Coast Story (2006) and Toile de Boogey (2008). Tell us about these textile-influenced works. Do you have a favorite? What kinds of images of everyday life are buried in there?

MDV: I discovered Toile de Jouy in the wallpaper of my mother-in-law's bathroom in the late 90s. I became fascinated with this 18th century French style and with Rococo decorative arts in general. I love the draftsmanship and intricacy. In 2001, I started using it as a found composition within which to improvise, combining found imagery from popular culture and art history with the aforementioned biomorphic abstraction, among other things. Klusterfuck has to be an all time fave. 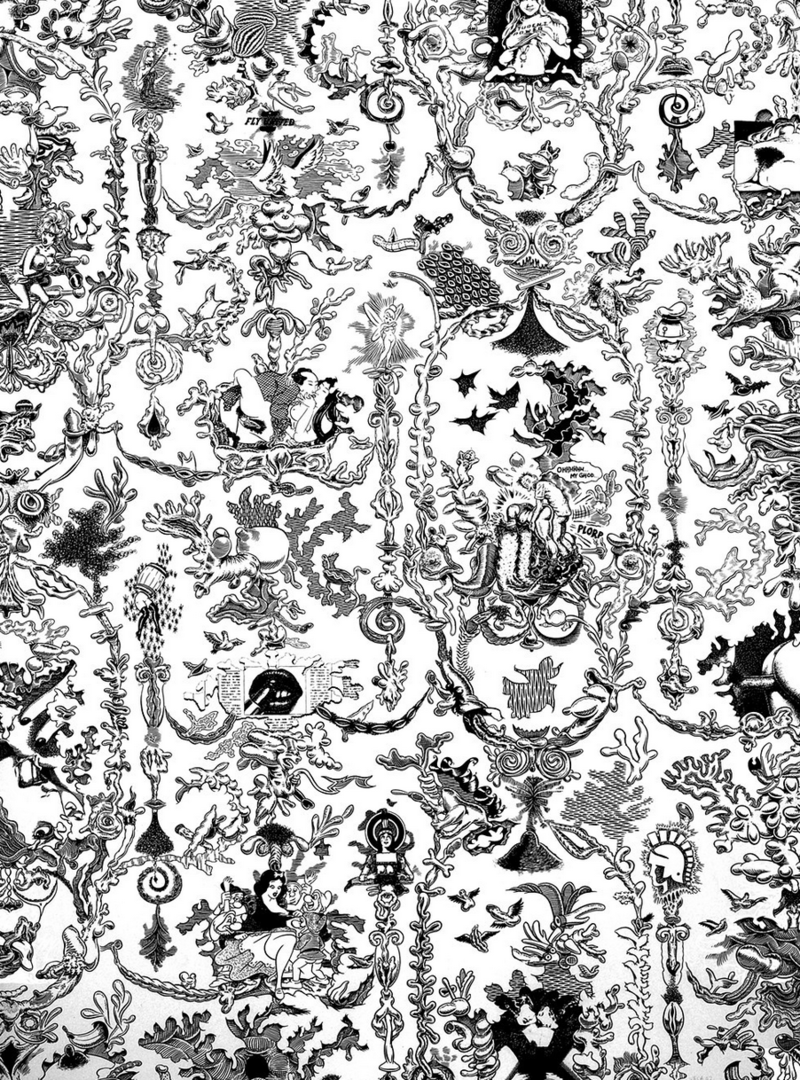 OPP: Tell us about the various museum installations that include huge, encompassing wall drawings replete with bean bag chairs. Madder Hatter (2016), Virgil’s Vestibule (2016) Le Poppy Den (2014) and Son of Phantasmagoria (2012) are just a few. I’ve sadly only seen pictures online, but I imagine these spaces as energizing refuges from Museum Fatigue. What experience do you hope viewers will have in these spaces?

MDV: I like that idea of a refuge and always appreciate a good chair. My goal usually is to create a spectacle: something monumental and awe-inspiring, immersive, overwhelming and interactive. I often aim to alter the function of a sterile white-cube museum space into a trippy, psychedelic lounge. When I first visit a potential space, I try to let it dictate to me a course of action, to let it reveal to me what should be done. In this way the work is truly site-specific and made for the site in which it will exist—typically for a limited time before it's destroyed. The process therefore becomes temporary, ephemeral and performative. I'm usually working in public and claim the space as my own studio for a while.

OPP: Most recently, you created Madder Hatter, followed by Maddest Hatter, for Turn the Page: The First Ten Years of Hi-Fructose, a touring exhibition that has its final stop (and is on view through September 17, 2017) at Crocker Art Museum in Sacramento. What’s your connection to Hi-Fructose?

MDV: I randomly met Attaboy, cofounder of Hi-Fructose at a San Diego Comic Con afterparty, which led to a spread in the magazine a couple of years later. The curators of the show chose me and 50 or so other artists who had appeared in the magazine over its first 10 years. 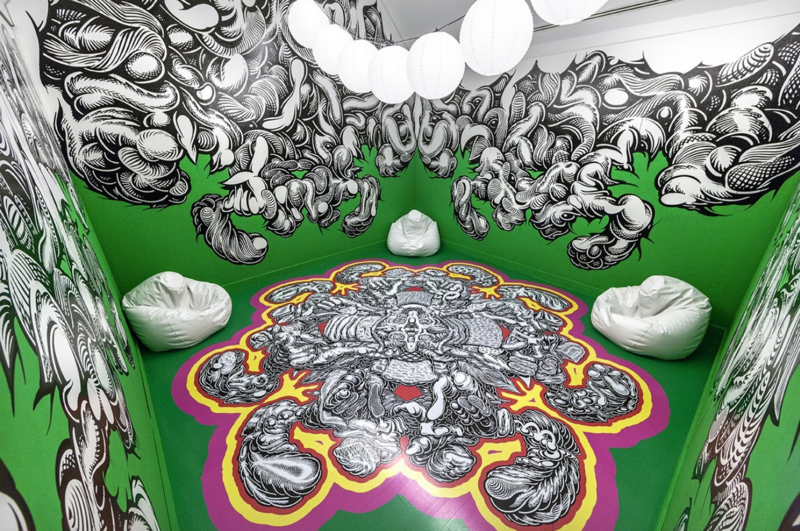 OPP: How is Maddest Hatter different from Madder Hatter?

MDV: I made Madder Hatter for Turn the Page at Virginia MOCA in 2016. This installation was derived from an earlier painting called Hatter (2015), that referenced the art from a tab of LSD depicting the Mad Hatter from Disney's Alice in Wonderland, which was, in turn, based on Lewis Carroll's book—there’s a rabbit hole for ya. For the show's final presentation at the Crocker Art Museum, I adapted the work to fit the scale and proportions of the room. I altered the colors and redesigned the floor graphics, but the concepts and general design principles remained the same. In both cases there's plenty of improvised, stream-of-consciousness wall-painting.

OPP: What’s the process of creating these temporary, improvised wall drawings like for you?

MDV: There's always an essential improvisational element to my installations, which is most often made possible by a lot of careful planning and design. A lot of prep work goes into them ahead of time regarding compostion, scale, color, allowing me the freedom to be spontaneous and direct in the execution. There's also a lot of adrenaline associated with the monumental projects as time is always of the essence. I've enjoyed traveling to places I'd never been like London, Tokyo, and Guadalajara and setting up shop, so to speak, living and working in a strange place and meeting the locals and exploring a little. I does take a lot out of me, so I try to limit these to a couple per year. It's nice to spend the rest of my time at home with my family and in the solitude of my studio. 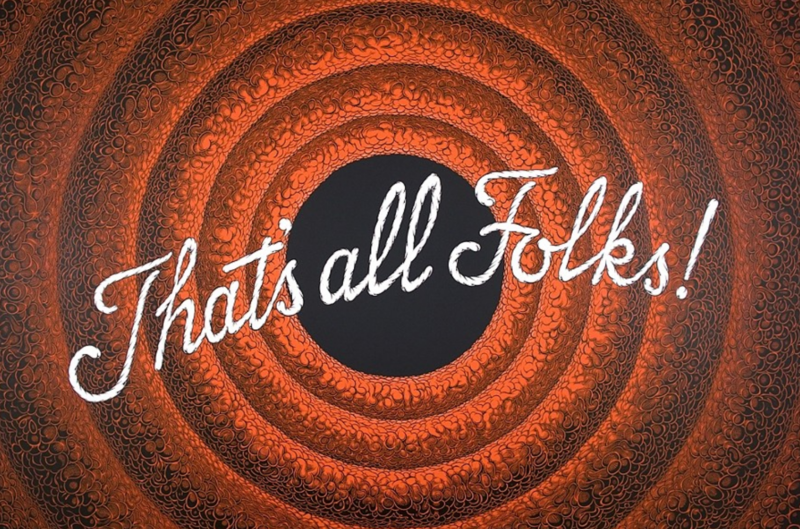 OPP: What keeps the process fresh?

MDV: Since I was a child, I've been drawn to the more intimate side of art—drawing in my room alone or with a friend. The combining of oppositional elements—micro vs. macro, elegant vs. vulgar, spontaneous vs. calculated, high culture vs. low—is a recurring theme in most of my work. That opposition is echoed in these alternating modes of working, which keeps things fresh and interesting, always giving me something to look forward to. 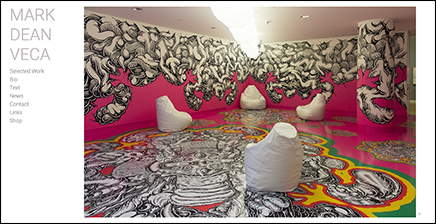 Featured Artist Interviews are conducted by Chicago-based artist Stacia Yeapanis. When she’s not writing for OPP, Stacia explores the relationship between repetition, desire and impermanence in cross-stitch embroideries, remix video, collage and impermanent installations. She is an Adjunct Assistant Professor in the Department of Fiber and Material Studies at The School of the Art Institute of Chicago, where received her MFA in 2006, and was a 2011-2012 Artist-in-Residence at BOLT in Chicago. Her solo exhibitions include shows at Siena Heights University (2013), Heaven Gallery (2014), the Annex Gallery at Lillstreet Art Center (2014) and Witness, an evolving, durational installation at The Stolbun Collection (Chicago 2017), that could only be viewed via a live broadcast through a Nestcam. Now that the installation is complete, you can watch it via time lapse. Her upcoming solo show Sacred Secular open on August 11, 2017 at Indianapolis Art Center.