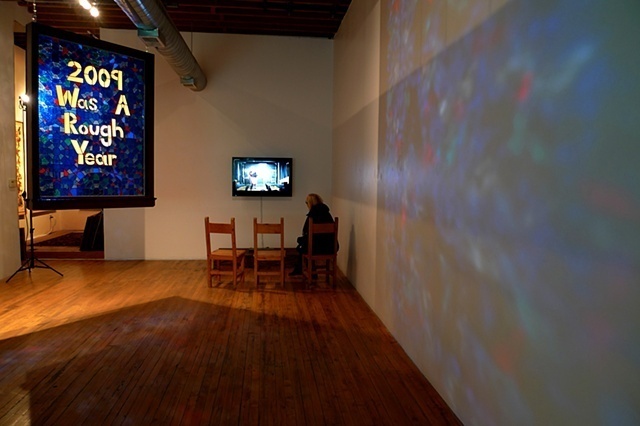 2010 Was A Rough Year
Installation Image, Thomas Robertello Gallery (Chicago)
Stained glass window and video documentation of stand-up comedy performancesOtherPeoplesPixels: In your artist statement you discuss your attempt to give the cliché new and personal meaning. Those ideas apply especially to your series I Throw Myself At Men, as well as your projects, Lilly invites you to come watch the sunset with her, and 2009 was a rough year. Let’s talk about how your shifting media throughout and within each these three projects effects your viewers’ interpretation of the clichés you’ve addressed. Do you yourself gain further insight from exploring the clichés from the multiple “angles” of photography, participatory websites, performances, labor-intensive constructions, and installations? LillyMcElroy: One of the main reasons that I make art is that I want to be able to communicate ideas. The advantage of having a multi-disciplinary practice is that I try and figure out what kind of media best conveys the concepts that I am interested in.  Also, no singular project has really provided me with complete answers or explanations to the things that I am curious about. Using a combination of media allows me to keep hacking away at an idea.OPP: What comes first in your art making process—an idea about a cliché or an idea for installation or performance, or do they occur to you simultaneously?LM: I would say that my ideas mostly come in the form of whims; a moment when I want to see what will happen if I perform an action or ask a question. My projects all begin very simply and I wind up using a lot of cliché’s because they are an effective way to communicate ideas or maybe that is just the way by brain works. I think very literally and a lot of those thoughts are clichéd. However, that thought process allows me to introduce a lot of humor to the projects. Ideas generally come first, cliché’s are just another interesting tool to work with. 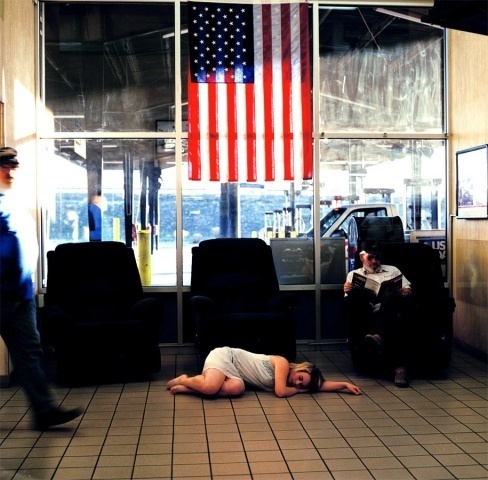 Truck Stop
2004
C-PrintOPP: How do you negotiate trust and vulnerability in your work—or do you think about the interactions involved in your performances as vulnerable or requiring trust?  Are you nervous about potential outcomes before lying down in a nightgown in public as you did in Locations, leaping at strangers in bars as you did in I Throw Myself At Men, or performing other people’s jokes on stage as you did in 2009 was a rough year—or are you generally faithful in your attempts at connecting? LM: For my projects, I often approach strangers or am in situations where I do not have complete control. I make myself, at some level, vulnerable to other people’s responses, but I suppose that may be one of the reasons that they choose to participate in my projects.  The fact that I am vulnerable or at least making an earnest request makes it possible for them to trust me enough to participate. Hugging a stranger on the street or allowing some woman you just met at a bar to leap at you takes a little bit of bravery or trust. To be honest, I am often surprised that people are willing to participate. Ideas about vulnerability are most interesting, for me, in the Locations series. By lying down in public spaces, I was making myself physically vulnerable, but that action became aggressive simply because it was an interruption. I am interested in actions that can signify more than one thing, behaviors that are simultaneously loving and cruel.However, I am always nervous during my performances. That is part of the reason they are interesting to me and possibly part of the reason that they are successful. I am genuinely trying to connect with people and therefore the possibility of failure exists. I know to stop working on a project or performing an action when I am no longer nervous. Doing stand-up was a whole other type of experience, though. There was a lot of adrenaline and the moments when I actually got people to laugh at the jokes were intoxicating. 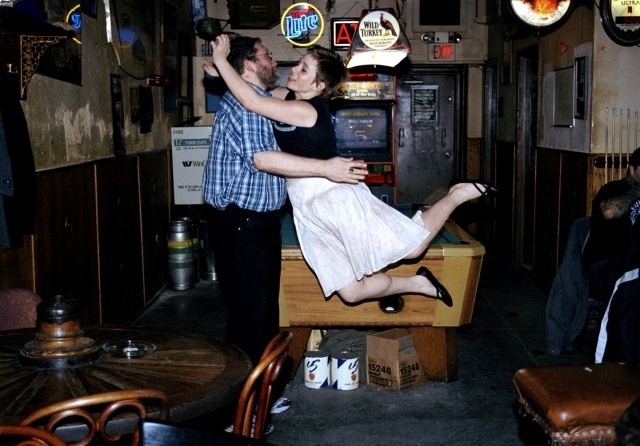 I throw myself at men - #12
2008
Digital Print
30 by 40OPP: Did any of the men in your series I Throw Myself At Men not attempt catch you?LM: Yes and I just bounced off of their chests. OPP: Were there any contributed jokes that you were uncomfortable performing at comedy clubs in 2009 was a rough year?LM: I didn’t tell any of the racist jokes and I partially feel like that was a cop-out.  I was supposed to be telling all the jokes that people sent in, but I couldn’t.   OPP: How does the idea of failure factor in your bodywork as a whole?LM: Failure is key or at least the possibility of failure is key. Without that possibility there would be nothing to root for. It would be like watching a sports movie without the underdogs.OPP: You’ve written about the gestures that you enact in your performances as simultaneously loving and cruel. Can you give me an example of how that duality plays out in a particular piece?

LM: Hugs is the first piece that comes to mind. For this video I hugged strangers without asking their permission.  A hug, a loving and tender gesture, became aggressive and selfish. My behavior was a demand that people engage with me and there is something very mean about that. That said, there were a few moments of legitimate tenderness in the video, moments when my gesture actually felt wanted. That is what I mean by loving and cruel.OPP: Your drawing and paper mache installation, I kicked a dog implicates you as either having kicked what appears to be a friendly non-threatening dog, or wanting to. How does your Dog series factor into a body of work concerned with implicating yourself and others? Was this an attempt at making it clear that you are aware of your complicated position in your work—or did you just want to be sure and eliminate the possibility of ever being able to adopt a pet? LM: That project had a lot to do with frustration, with wanting to destroy or reject something lovely because of desperation.

OPP: What are you working on now? LM: A bullmastiff named Buttons saved my dad when he was 11. Right now I am working on a sculpture of that dog. 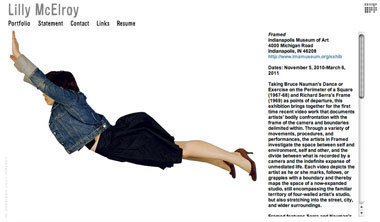