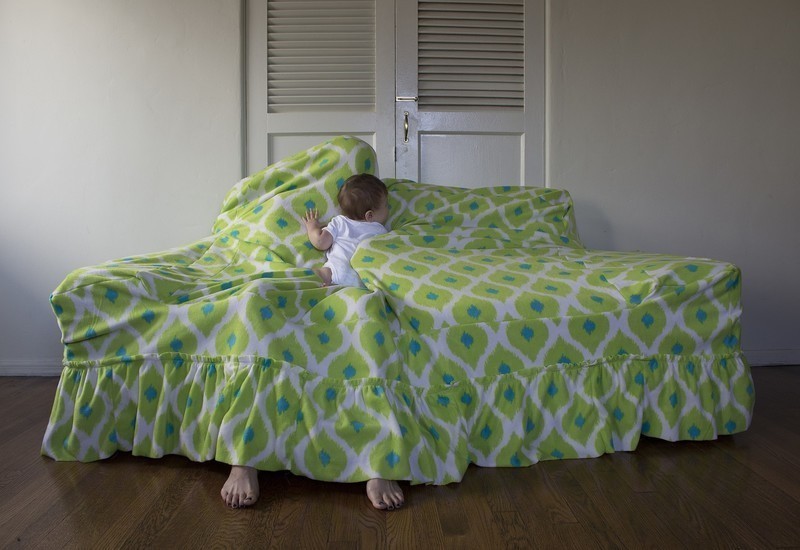 KAITLYNN REDELL's work often begins with photographs, both found and made. Photography's history is steeped in the myth of pure and accurate representation of reality, making it a perfect medium to explore the errors we make when define humans only by their bodies. By cutting into, drawing on and collaging photographic imagery, she explores the relationship between the identities we choose and the ones forced upon us by others. Kaitlynn received her BFA from Otis College of Art and Design in 2009 and her MFA from Parsons the New School for Design in 2013. She has participated in numerous exhibitions nationally and internationally. Her work has been seen most recently in Labors: An Exhibition Exploring the Complexities of Motherhood at Pearl Conard Gallery, Ohio State University in Mansfield, Ohio and the 32nd Biennial of Graphic Arts: Birth as Criterion in Ljubljana, Slovenia. Kaitlynn has been an Parent Artist Resident with her daughter at Popps Packing. In addition to her solo work, she is one half of Redell & Jimenez, an ongoing collaboration with artist Sara Jimenez. They have been Artists-in-Residence at the Wassaic Project and Yaddo. Kaitlynn lives and works in Los Angeles.

OtherPeoplesPixels: Your work addresses “inbetweeness and how ‘unidentifiable’ bodies—that do not identify with standard categories—negotiate identity.” Generally speaking, how do you think about the relationship between identity and the body?

Kaitlynn Redell: This is such a complex question.  I think what is most important to distinguish is the difference between the identities we choose for ourselves versus the identities that are placed upon us by others. I think we are lucky to live in a moment when that distinction is becoming more widely acknowledged. Unfortunately, however, I think the identities that are most commonly placed upon us are directly tied to the body and unfortunately are often used as a way to categorize and control. 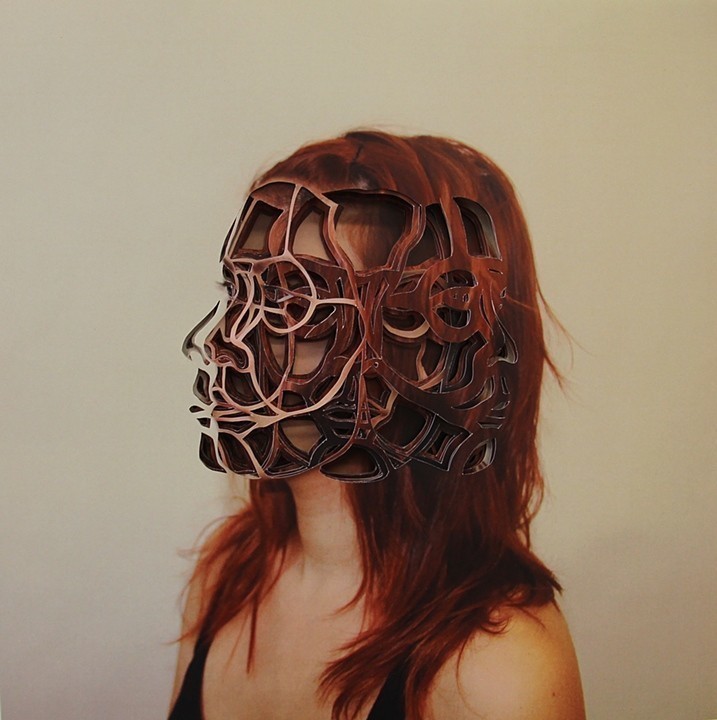 OPP: Do you always, sometimes or never use your own body/image in the work to address your conceptual concerns? Why or why not?

KR: My work always comes from the personal, so it often makes sense to use my body/image as a direct medium. Sometimes it is more obscured than other times. I am very conscious of the generalized connotations the image of my body has on the work, so how and when I use my body directly correlates to how aware I want the viewer to be to their own assumptions of my identity. 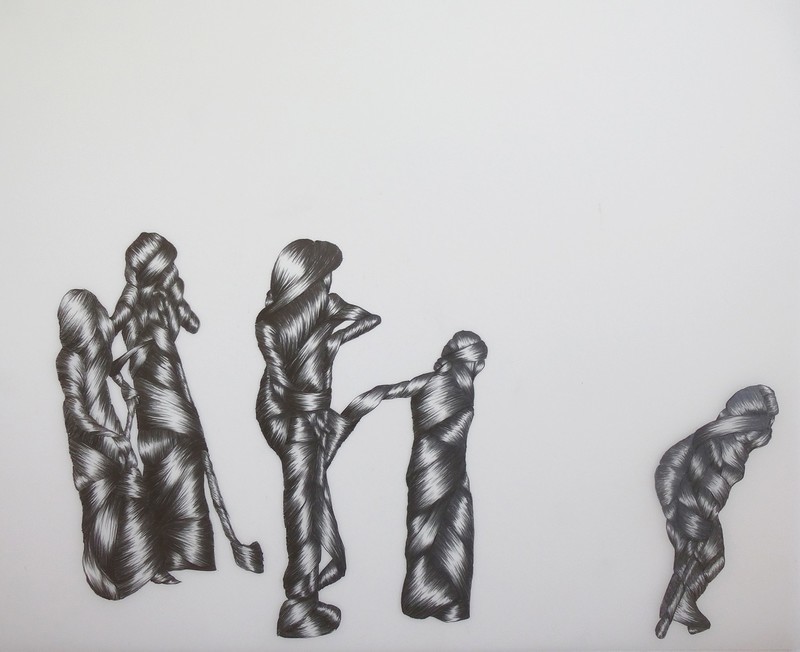 Supporting as Herself (Civic Duty), 2013. Graphite on Duralar.

OPP: Can you talk about the role of hair in Supporting As Herself? I see figures obscured—almost mummified—by their own hair.

KR: Supporting As Herself explores how film stills of Anna May Wong, the 1920s Chinese American actress, carry a sense of historical weight and serve as a contested foundation for my own understanding of identity. The manipulated representation of her public image, the stereotypical roles she played and my proximity to her birthplace—Chinatown, Los Angeles—have created an aura that haunts me to the core. I see Wong as a lynch pin for what it means to be both simultaneously American and foreign. . . to be “othered.”

In my series Supporting as Herself, I use photographs of Wong as a starting point. Through performative mimicking, photography, collage and drawing I explore the ways in which Wong presented/performed race and gender. I created a series of figurative collages and drawings using publicity stills of Wong and images of myself mimicking her poses as reference material. I am interested in how my figurative collages/drawings reference Wong’s image as a starting point, but become amorphous bodies engaged in their own language. The drawing sections done in graphite reference hair, fabric, muscle or some sort of tightly bound covering.  This rendering is meticulous and realistic, but unclear as to if it is hair, muscle or some other sort of fiber. Ultimately, I am interested in how these shape-shifting figures begin to create their own histories, of their own accord. 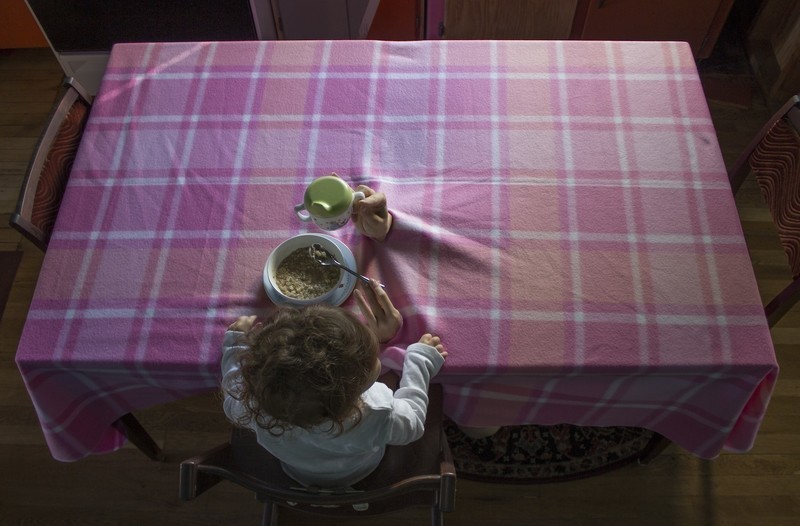 OPP: Your most recent series Not Her(e) gets at the complicated emotions involved in motherhood. These photographs point to the loss of identity and the subsuming of self into the role of mother. Can you talk about the process of making these photographs?

KR: When my daughter was first born, I had a really hard time transitioning my studio practice. My time was so fragmented and when I did get in the studio (aka my dining room table at the time), I felt like I was totally lost and didn’t know what to make. I thought about Mierle Laderman Ukeles’ Maintenance Manifesto every, single day.

So, I began to change my ways of working to fit my new routine, both conceptually and materially. I was looking at a lot of Victorian Hidden Mother portraiture and thinking about how much of becoming a parent is about being loving and supportive and well as being invisible. And not only how emotional, but physical it was to become this support. I started thinking about and making drawings for this body of work when my daughter was a month old. We shot our first image when she was three months and the last when she was almost two years old. I started making “furniture costumes” for every piece of furniture I used to take care of my kid. And then I would inhabit these costumes and become a part of the support.

OPP: What does it mean to have a “bi-coastal” collaborative practice with artist Sara Jimenez?

KR: Sara and I started collaborating in 2012 in graduate school at Parsons in New York. She still lives there, but I moved back to LA the summer after graduation. Our collaboration has always been project-based, and we have continued to work in this manner even though we are not in the same city. We apply collaboratively to residencies as well as spend short, intense periods of time together starting and completing projects. We also spend a lot of time planning over video chat. Most recently we attended the Yaddo residency in upstate New York together and will be curating an exhibition here in LA in 2019. The exhibition will include works by artists who explore poetic gestures of the body as an evolving site of communication, language, history and myth, via collaborative based projects. Specifically we are interested in how the process of collaboration activates a space for collective negotiation of our physical and psychic embodiment of identity.

OPP: How has this collaboration influenced or affected your solo practice?

KR: Collaborating with Sara has always been a part of my “mature” art career, so it absolutely affects my solo practice. When you collaborate, you constantly have to discuss every detail with another person and can't just get lost in your own head. So it has really helped me to verbalize my process both physically and conceptually. Before we started collaborating, our solo practices came from very similar conceptual places—which is a big reason why our collaboration has always felt so natural—but were somewhat different in terms of discipline. I come from a drawing, papercutting, painting, textiles/fashion background and Sara from a performance, video and sculpture background. We both had this history of body movement (Sara with dance and me with gymnastics) and I think performing collaboratively with her really allowed me to access that physical space again. 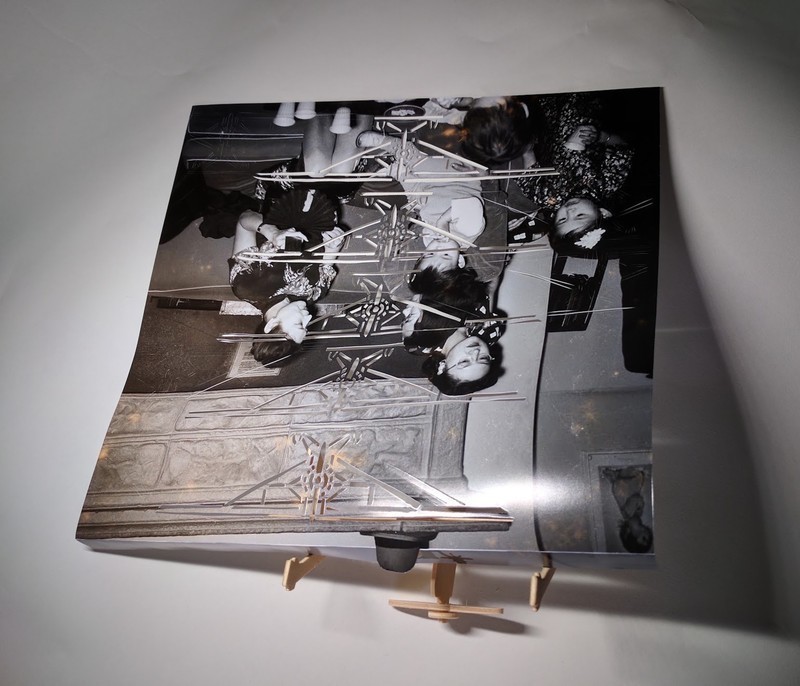 KR: Aside from the curatorial project with Sara, I’m also working on a series of drawings, collages and paper-cut photographs about my great Auntie Hilda Yen. She’s actually my mother’s Aunt, but in Chinese culture the term “Auntie” is kind of all-encompassing for female relatives and close family friends that aren’t your mother or grandmother. I never had the opportunity to meet Hilda, but I am interested in the fluidity of memory and the influx nature of personal and collective histories, which has brought me to researching her. Hilda was one of the first female, Chinese aviators (beginning in the 1930s) and was a member of the League of Nations and the World Women’s Party for Equal Rights.

I’m interested in the sort of historical and personal mythology that has been built around her and how women like her are so often left out of “commonly known” history. As I’ve gotten deeper into the research she’s become more and more fascinating to me in terms of how she’s been represented (or not) as a historical figure. Equally there is this whole other side in relation to my family’s personal memories of her. I’m interested in the kind of dovetailing between my mother and uncle’s fragmented memories of her and the glimpses of her “historical” representation in newspaper articles and League of Nations documents. A lot of the documentation is so representative of the racial and gender biases of the time period; I’m interested in how that narrative frames the information provided and only tells a fragment of the story. I think that one—unnervingly contemporary—quote from Hilda’s 1935 address to the League of Nations sums up how I interpret her mythology: “Give your women legal equality willingly and in good spirit, or have it taken from you.” 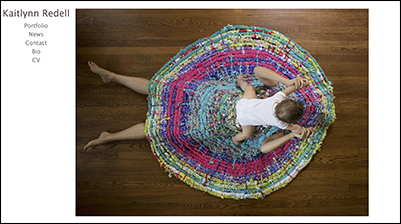