JONATHAN KEETON's large-scale landscapes and nocturnes create a solemn sensation of being immersed in the outdoors. Using watercolor, acrylic and gouache, he works from photographs taken on hikes and conveys a quiet reverence for the natural world. Jonathan documents his sources and his process on his blog. His work will be included in the Rocky Mountain National Watermedia Exhibition, opening on September 16, 2016  at Foothills Art Center in Golden, Colorado. He recently won Best in Show at the New Mexico Watercolor Society Spring Show, and you can see his work (almost) every weekend through October 2016 with the Santa Fe Society of Artists. Jonathan lives in Santa Fe, New Mexico.

OtherPeoplesPixels: In your statement, you say: “I’m lucky to be able to return many years later to my first love, although I am keenly aware of where my art might be had I been working as a full time artist all those years, and am mindfully anxious to make up lost time now.” What took you away from painting and what brought you back?

Jonathan Keeton: After working as a school teacher and an actor (and a waiter and picture framer), I stumbled into the beginning of computer graphics in California and ended up pursuing a career in visual effects for thirty years. It was nice to actually be paid to do something like art, and I felt a strong need to prove that I could succeed in the ‘real world.' After many years, with some prodding from my wife, I thought that if I was ever going to be an artist I had better start in earnest while I still had energy for it. Most people prefer me now to how I was then…! 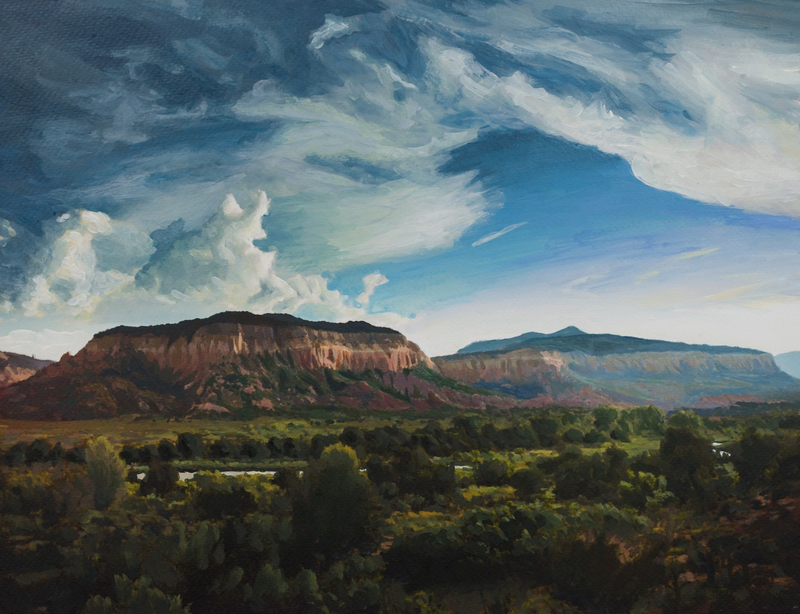 OPP: Your landscapes never have people in them, but in every case, I imagine the point of view of a solitary hiker. These are intimate experiences of nature, not grand, romantic landscapes. There’s a solemn mood of contemplation. Is this just me reading your work through my own history of hiking in Northern New Mexico and Marin County or a tone you’ve intentionally set out to evoke for the viewer?

JK: What a perceptive question! In my landscapes, what I am most intrigued by is the sense of being in the landscape, as opposed to viewing it from a distance. That’s when I have the most powerful response myself, and it is usually a result of having hiked some ways first. So I try to convey that feeling if I can. 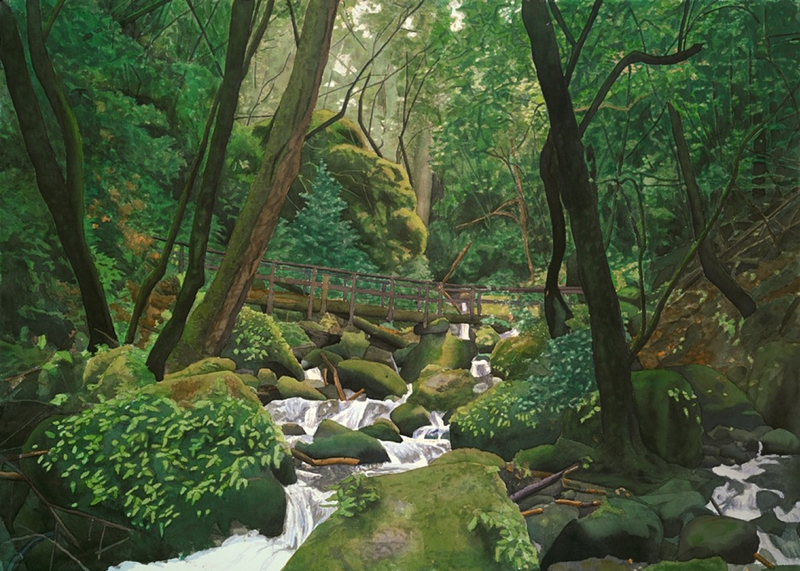 OPP: Why is it important to convey that sense of “being in the landscape?”

JK: I think that it’s a question of intimacy. Like the difference between seeing something, however pretty, at a distance, versus being in it. There is a sense, I think, of still being at a remove that I am trying to avoid; this is the same reason why I prefer to work large if possible. In a large painting the viewer is more likely to enter into it, as opposed to observing it from a (physical and emotional) distance.

OPP: Have you ever painted anything other than the natural world?

JK: Well, of course I paint nocturnes quite a bit. They are often cities or towns, but I feel that they reacquire a magical quality after the sun goes down somehow, that otherwise I find only in nature. I am intrigued by pools at night and also by florist shops in big cities. I would love to do a series of them. In each, I feel like there is a kind of a temple to the natural world of water and flora; a temple of yin if you will. 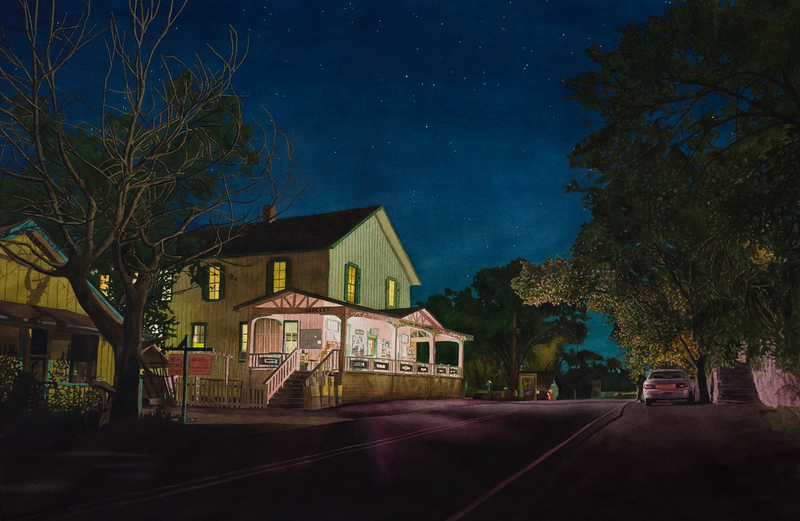 OPP: I should have phrased that differently; I was thinking of the nocturnes as landscapes, too. Although clearly they are not untouched by civilization, as evidenced by the electricity, architecture and roads. But these are rural spaces, not urban spaces, and the human presence is again limited to the point of view of the hiker, or in the case of the nocturnes, the wander. Can you say a little more about similarities and differences between the nocturnes and the landscapes in terms of that “magic quality?”

JK: Well, I am attracted to landscapes that give me a certain feeling, and although I might not be able to describe or predict what I might find, there is a strong recognition when I see it in front of me. Whether I can paint it is another problem! And at night, the sense of being on a planet in space is much stronger than during the day. There is almost a science fiction sense of newness in certain landscapes and night scenes for me, as if they were being seen with fresh eyes, or for the first time. I remember being a camp counselor in Vermont long ago and the kids were always loud during hikes, so that their noise kept away any animals or sense of wonder, bless their hearts. Another counselor had the idea of taking them into the forest on night walks when there was no moon, so one couldn’t even see one’s hand in front of one’s face. It was striking how the kids' attitude completely changed then—they definitely felt like visitors and were awestruck. That’s kind of the feeling that I get and want to convey if possible. 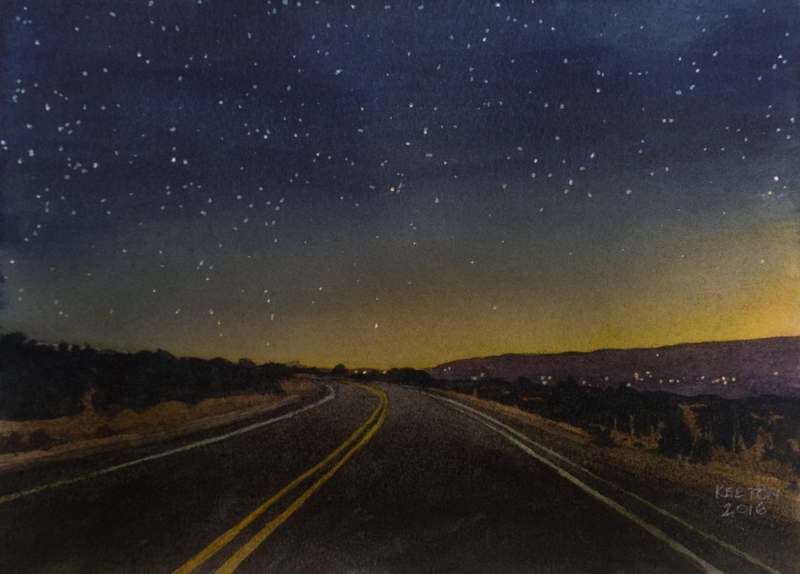 OPP: What’s your process? Do you paint from photographs, on site or from memory?

JK: I would be pretty darn proud of myself if I could paint them from memory! I take photographs and work from them in my studio. I learn a lot from painting on site, but dislike the result. Also, though, I am trying to paint a moment, when the light is a certain way, and everything in the scene changes when the light changes, so it’s pretty much impossible to do this work en plein air for me, when in five minutes everything changes.

A trick that I use to help is to print a version of the image that is exactly the size of my painting, and cut it into pieces to which I refer when I paint. By looking sideways instead of up at a reference, I don’t lose my place so much. I usually make a somewhat pale watercolor of the scene based on a pencil drawing, and that becomes a sort of watercolor sketch that then allows to paint with more boldness, once I have some idea of how everything fits together. 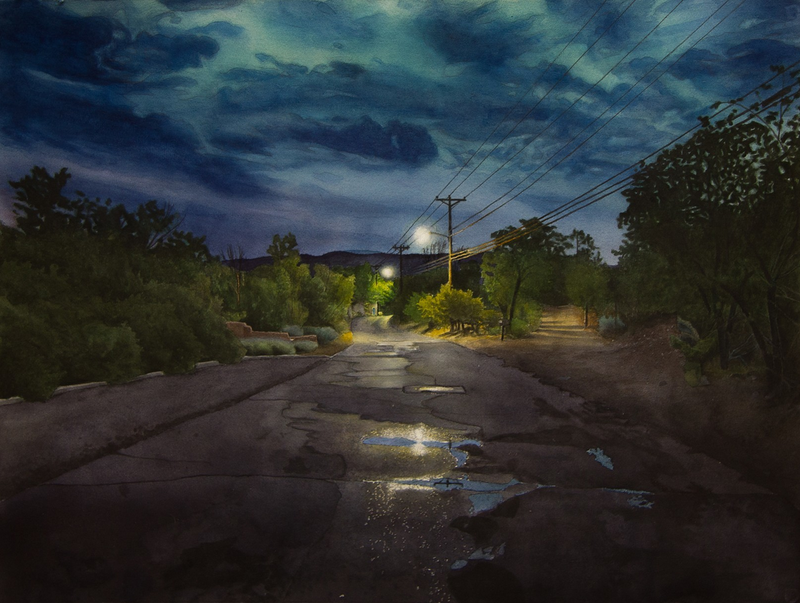 OPP: What should a non-painters know about watercolor, acrylic and gouache? Do you have a preference? If so, why?

JK: As it turns out, watercolor is by far the most difficult medium. For some reason many people beginning an exploration into painting feel somehow that they should use watercolors, then abandon the whole idea as a result. Acrylics are considerably easier, although that’s not to say they are a cakewalk, and every medium requires study and practice. Gouache is a medium that I learned in order to not have to throw away ruined watercolors. Basically gouache is watercolor paint with added chalk, and then extra pigment to overcome the chalkiness. It’s opaque, unlike watercolor, and one uses white instead of the paper as white, as one does in watercolor.

I have come to have fewer prejudices against particular mediums, and ultimately see painting images as the goal. There are certainly images that I would only paint in acrylic. When I started painting in acrylic this year, there were several images that I had not considered possible to make as paintings that are now in the queue. 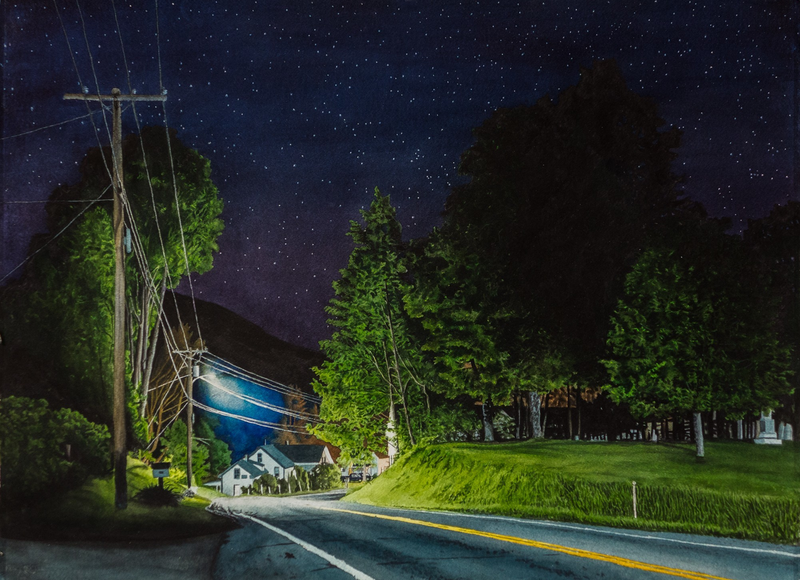 OPP: Why is landscape still relevant/more relevant than a time in history where painting the natural world was the only way to capture it?

JK: Wow, another great question. Well, first of all, we are more divorced from the natural world than at any time in our species’ history. There is a neo-Confucian idea that really struck me when I first encountered it in high school, expressed by the character, ‘Li’ (理). As I read then, it refers to the patterns in jade, but is intended to express the perfection in the apparent chaos of nature. That is exactly what I want to convey in my work. As to why I don’t just make photographs, especially since my paintings are so close in some ways to those photographs; I would describe my work as meditative and devotional, as opposed to emotional or expressive, per se. This is my own personal zen meditation in many ways, and if that feeling of awe and inspiration comes through at all, then I’m pretty happy. 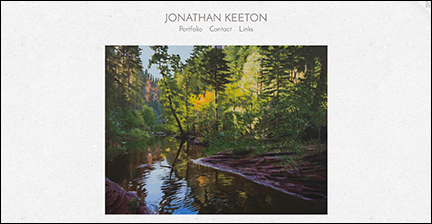 Featured Artist Interviews are conducted by Chicago-based, interdisciplinary artist Stacia Yeapanis. When she’s not writing for OPP, Stacia explores the relationship between repetition, desire and impermanence in cross-stitch embroideries, remix video, collage and impermanent installations. She is an instructor in the Department of Fiber and Material Studies at The School of the Art Institute of Chicago, where received her MFA in 2006, and was a 2012-2013 Mentor-in-Residence at BOLT in Chicago. Her solo exhibitions include I Still Haven’t Found What I’m Looking For (2013) at Klemm Gallery, Siena Heights University (Adrian, Michigan), Everything You Need is Already Here (2014) at Heaven Gallery (Chicago) and When Things Fall Apart (2015), a durational, collage installation in the Annex Gallery at Lillstreet Art Center (Chicago). Most recently, Stacia created a site-responsive installations for Form Unbound (2015), a two-person show at Dominican University's O’Connor Art Gallery (River Forest, IL) and SENTIENCE (2016) at The Ukrainian Institute of Modern Art (Chicago). In September 2016, her work will be on view in SHOWROOM, curated by Edra Soto, at the Chicago Artists’ Coalition as part of THE ANNUAL.