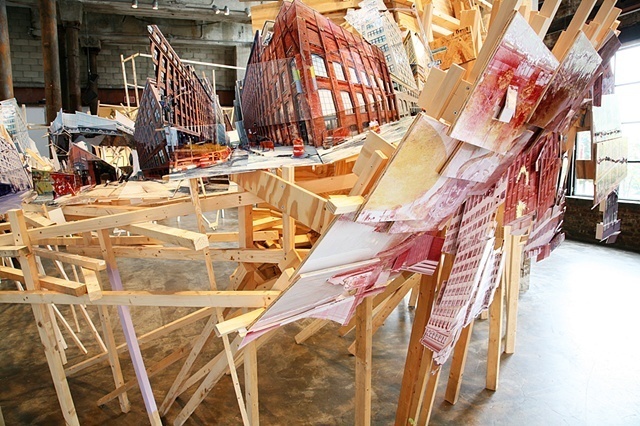 TILTED
2011
C-Print, Wood, Slide Projectors
30x25x12 feet
ISIDRO BLASCO combines photography and sculpture in his indoor and outdoor installations which use common building materials like plywood to question our perceptions of space and perspective. He studied at the Architectural School of Madrid before becomming a visual artist. He exhibits internationally and has received several prestegious grants, including two Pollock Krasner grants in 1997 and 2010 and a Guggenheim Fellowship in 2000. Isidro lives in Queens, NY.
OtherPeoplesPixels: You are originally from Madrid, Spain, where you received your formal training in art and architecture, and you currently live in New York. You exhibit internationally, and have done residencies all over the world. Has any one place has influenced your work more than another?
Isidro Blasco: Definitively the American culture has had more influence on my ideas and my work than any other—more even than the Spanish culture where I am from originally. Growing up in Madrid, I always had everything American as my model, and when I finally came here, it was like I belonged here. It was a very familiar place for me. I had a lot to learn, of course, but everything had a place in me. I totally embraced this culture.
OPP: Have you noticed any glaring differences in the way viewers and other artists discuss and interact with art in the various places you've been?
IB: Yes, people have different reactions to my work in different places. When I show in China, for example, I get a lot of comments about the craftiness of my pieces. They love that I find pleasure making the structural supports of my installations, and they admire the elaborate craft of it. I have also noticed that in Europe, they generally—although I hate generalizations—get tired of my "one line" kind of work ("same line" some will say). I guess they need more conceptual ideas behind a piece. But the best feedback I've received has always been in Australia. There I find harmony. My work is understood exactly the way I want it to be understood, the way I have intended. It has some conceptual ideas behind it, but not too heavy. And it has a pleasure in fabrication without being only aesthetics. 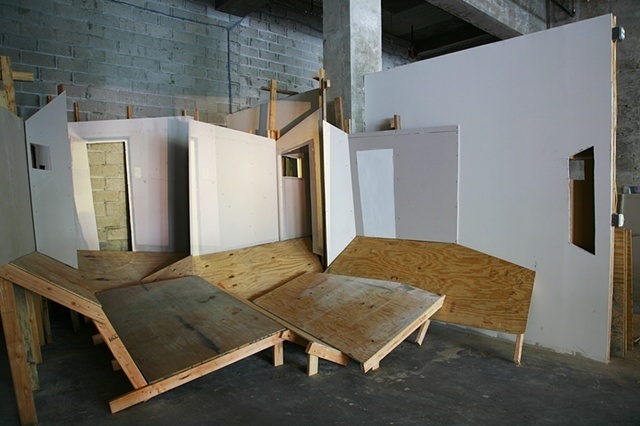 OPP: Most of your work explores shifts in perspective. Many of your constructions, such as Seeing Without Seeing (2000) or the recent Deconstructed Laneways (2011-2012), blend into their environments if viewed from a specific spot, but are revealed to be constructions if the viewer moves just slightly. Other pieces, such as Tilted (2011) and The Middle of the End (2006), bring the outside inside or bring one location to another. How can this use of space talk about bigger picture kinds of issues?

IB: I believe that the question is not what we see but how we see it. And yes, that is a fundamental question. The how we see it will tell us something about ourselves and the time we are in, the context.
Throughout history, we have developed many tools and many different ways of representing reality. In my work, I try to use the tools that we use in our daily lives. I take the elements of the built environment that are available to me and use them. There is not a stage set up or anything like that. I am only interested in how I perceive reality and how I can share that perception with others.

OPP: Last year you went to Sydney, Australia where you created Deconstructed Laneways as part of a public art project called the Laneways Project. Tell us about this project.

IB: This was an amazing experience, and also Sydney is an amazing city. I love it there!
The city of Sydney does these non-permanent public art projects every year, and I was invited to do one. The idea is to revitalize downtown and to bring attention to out-of-the-way sites.
I decided to take several pictures from one specific place in the intersection of this given street and make a mirror-like construction that reassembles the same street. This large construction was placed just to the left of the street in question, and from some areas of the intersection you got the sense that you were looking at a mirror. But only for a few seconds. If you were just walking around there, you could see the overlapping of the different images and the distortion in general.
I got a lot of great feed-back: people wrote great comments on the back of the piece. It was pretty cool. I think most people liked it. 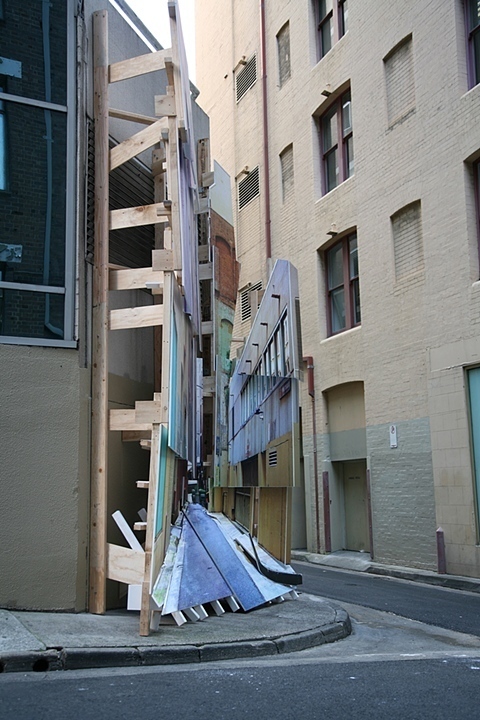 OPP: What's challenging about making art for public space as opposed to the gallery?

IB: I've always had my doubts about public art. I just don't think it is fair to impose something, anything, on the people that are walking by those public spaces everyday. I am sure a lot of them don't like it or don't understand it, but they have to live with it.
That is why non-permanent public art is much better. You don't like it? Don't worry, it will be gone soon. We should be very careful with permanent public art. We may think that looks amazing, and most people may agree with us, but I am not so sure that will be the case in a few years. And also, most public art is made with the money from the taxes paid by those people that will suffer the art work...and nobody asked them!
But of course, I don't even want to imagine what kind of art we would see out in the streets if we asked everybody their opinions...most likely we will not see art at all in the streets.
OPP: I agree that there is some very bad public art out there that I don't enjoy looking at, but that work is always a challenge to me. I wonder, who likes this? Who picked it? Why don't I like it? I think it's good for people to be forced to deal with some things they don't like, because that's life anyway. Besides, isn't the architecture itself and the way the city grows and develops something we as citizens generally don't have any choice in?
IB: Sure, the architecture is there. Nobody is going to ask you if you like it or not. It is just there, and it can be very ugly sometimes. But at least it has a utilitarian use, therefore that is enough for most people. Also buildings have the advantage of becoming historical entities over time. This has happened over and over again. Remember the twin towers: nobody liked them before September 11th. On the other hand, public art, in most cases, will not became part of the historical background of the city. It will just become obsolete. 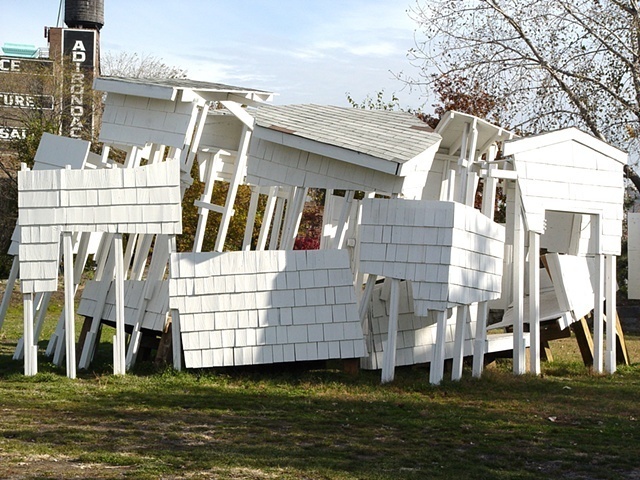 OPP: When did photography first enter into your constructions? How has your use of it changed over time?

IB: I have always used photography in my work. At the beginning, it was not there in the final product but only in the process. And I still don't use photography in the conventional way. I take the photos, but at the end, I may only use whatever the camera had framed of the space that I am interested in. I go back and forth. Sometimes I use hundreds of images, like right now for the installation that I am working on for Wave Hill in the Bronx. But some other times, I prefer to leave the space almost empty, only building the surfaces that make up the space, and only framing them somehow.
OPP: Can you tell us more about what you are planning for Wave Hill?
IB: The theme of the show is "The Palisades" across the river, on the other side of the Hudson. I am building a large installation made with hundreds of photographs of the rock formations and of the bare trees. It will look like a wave that comes into the room from the wall and it goes back to the wall in a different part of the space. There is going to be a lot of overlapping, mostly in black and white with touches of bright colors here and there. My idea is to give the spectator the sense of flying above the Palisades Park. Everything (rocks, trees, paths) will be cut and made into three dimensional objects; some sections will be larger than others. A dream-like flyby.

OPP: Your 2010 video Elusive Here, which grew out of writing you did for your doctoral thesis, adds psychological and emotional dimensions to the sculptures you are known for. It appears to be autobiographical, because I can imagine how the sculptures you make would grow out of some of these experiences. Is this the case? Any plans to continue making video?

IB: I made that video, or short movie (it's 19 minutes long), because I got a lot of money to make it. Comunidad de Madrid, a state organization from my hometown, gave me the money when I was putting together the show at one of their galleries. It is very unusual to get money in that way.

I keep writing. I write everyday about my perceptions, and, yes, they are autobiographical. Hopefully I will get another opportunity soon to produce another video/film like that one. It was a lot of fun to make it, an amazing experience.
Very different from my other kind of work. But in a way, it is the same. I am always talking about the same things: how is it that we interpret the space the way we do and how is it possible that we share that same way of perceiving with almost everybody? 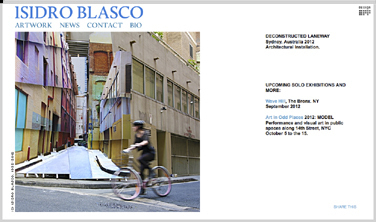