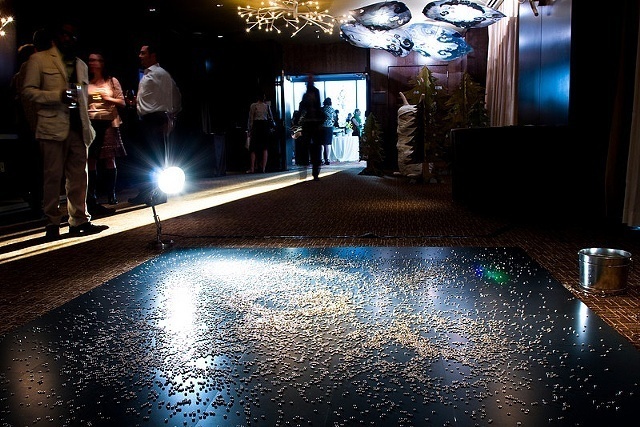 OtherPeoplesPixels: You describe exploring technology in your work both as subject and media. In doing so your primary media are installation and performance. Let’s talk about the relationship the performances and installations have to one another in your artmaking process and how the combination of disciplines plays into how viewers perceive your work in varying locations.

Sara Schnadt: I am trained as a performance/installation artist so I naturally think about ideas as live gestures and environments at the same time. Space, architecture and gesture are fundamental to how I think. In the past four years the installation component of my work has developed to the point where the intention holds up without the live presence. This has opened up the possibilities for my work in terms of where and for how long I can show a work (a month with regular performances versus an evening) which has been exciting. Most of the time a live activity is integral to my work, though. It's at the heart of the work's concept, like building the internet in Connectivity or creating versions of the universe in Drafting Universes. I also sometimes use found movement in a similar way to how I consider found objects. I see them as materials with a previous life and history. For example my piece Reading Gestures uses found pedestrian movement—body language that people use to create a private space in a public library in order to get lost in what they are reading. It was created for a space that was the Chicago Public Library's reading room from the 1880, through the 1980' and drew from images of readers spanning this time period for movement material.

I do have two recent pieces that are installations without a live element. But one of these is an adaptation of a performance remnant—a mistake when the room-scale installation component of my Connectivity piece (a representation of the Internet in string and wire) was sent back from an international show as a compact three foot ball. The other, Network, is the idea of a gesture in string—a virtual network structure cutting across an ordinary space. But even this piece is going to become a performance in it's next iteration.

When I am there live inside of my work, the audience tends to take on an engaged spectator role or sometimes they respond like they are seeing the inside of my studio and are interested in getting close to the creative process. When I am not there live (either during the run of a piece with scheduled performances or with my pure installation pieces) I think that the audience experiences my work more actively and intimately because I am not there to serve as an intermediary. The experience of the work is much more charged when I am there live however, and there is a place for both kinds of engagement in most of my work. 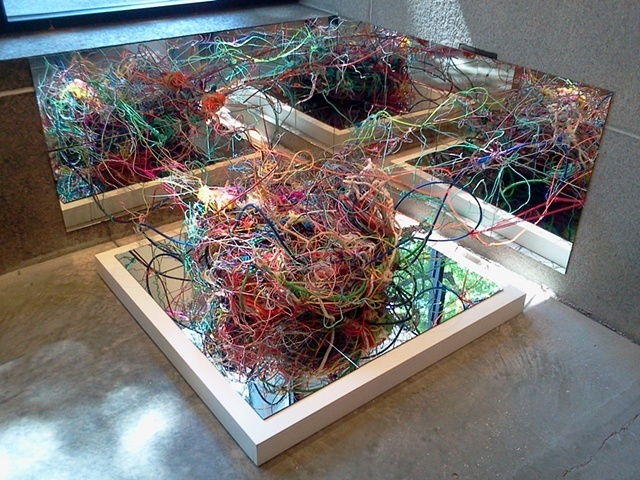 OPP: In reviewing the performances you’ve created in the last decade I am especially interested in noting each work’s duration. Many range from one to three hours performed multiple times over the course of an exhibition while others occur once and last a few days. Could you speak about how you determine the duration of a performance?

SS: I consider the format of the presentation opportunity as part of the site or situation I am responding to. In most cases, the overall duration or run of a piece is a response to the opportunity (a one-night-only, site-specific performance festival versus a month-long run in an exhibition space). If I have the time to create a series of performances within a larger exhibit time-frame my preference is to perform for three hours at a time. This gives a focused enough time window that you can have a decent accumulation of audience (which really gives the work energy) but also is long enough to push me beyond my comfort level for stamina. Pushing past this point, which happens usually about an hour in for me, puts me in a heightened meditative space and makes the performance more transformative because I really become part of the work. 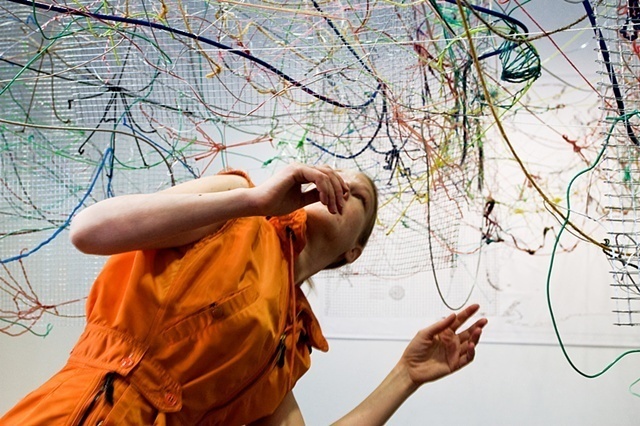 OPP: I am similarly interested in your costuming in the performances you’ve created in the last decade. In Drafting Universes and Continuity you are dressed in what could be interpreted as business attire, and in Network and Network Hub you are dressed in everyday attire, while in Connectivity you wear a custom-made orange jumpsuit that could be described as both futuristic and prison or inmate apparel-inspired. What factors go into your costuming choices?

SS: I think of the costume as part of the sculptural element of each piece. Some of my work is more abstract and some more pedestrian in it's vocabulary, and so the costumes vary accordingly. If there is a real type of person I am embodying for the piece, then I will put together a costume that suggests this person. For Continuity my intention was to be dresses in historically-ambiguous travel attire, since the piece included a large collage of travel images from a wide range of historical sources. I also chose the color palette of this costume to match the piece. For Drafting Universes I was a scientist or science worker, but I also wanted to keep the read very open so the audience could make a variety of references from my activity. I actually rotated through three costumes during this performance because it was a little tricky to get the balance just right. Also the installation element is very abstract visually, so a lab coat was just too literal. I will fine-tune the costume more for its next showing.

For the building of Network we are wearing street clothes because the installation process is not part of the work. With Network Hub, (a piece about airplane flight patterns) I am shooting for a balance between a pilot and a stewardess, since both those roles facilitate flight. Also, simple lines and a single color look good formally with the piece. I have worked with a fashion designer for one on my pieces, Chicago-based Agnieszka Colon. She lent me a gown that she made out of a woman pilot's flight suit, which I wore to be both an architect and municipal worker role as I 'built' the Internet in my piece Connectivity.

OPP: Connectivity celebrates Web 2.0, the collective activity of creating and sharing information online. Web 2.0 is integral to the website and online community you created as co-founder and technologist for Chicago Artists Resource at the Chicago Department of Cultural Affairs and Special Events. Do you consider yourself a hybrid artist in that you work at the intersection of art and technology in both your work as an artist and your work with Chicago Artist Resource? How do the two inform one another?

SS: Yes, absolutely they do inform each other. And yes, I do consider myself a hybrid artist. Or just an artist with multiple intersecting interests. I got involved with arts administration early in my career. I wanted to understand the infrastructure around artists' practice in order to give my own work a context and to participate in activities that enrich this infrastructure and allow me to be part of something greater than myself.

My work with CAR has directly affected my art practice. It has expanded my art network both locally and nationally, inspired me to focus on technology innovation as a central theme in my art, and shown me that I can pull off large complex projects. The scale and ambitiousness of my art has grown as a direct result. My art practice also affects my work with CAR because I am much more effective as an advocate for artists' professional practice when I am actively practicing myself. In terms of working at the intersection of art and technology, this is just where I feel most engaged.

OPP: You keep a research blog that is accessible from your website. How do you approach researching some of the specific details and networks that appear in your work? How do your viewers tend to engage with the information you present to them both online and in exhibition spaces?

SS: I've realized over the past few years that the scale, complexity and processes in my art have been informed by my work with Chicago Artists Resource. Overseeing development of this large and comprehensive web site has involved a lot of research on professional practice content for artists. A taste for research-intensive creative process has since become part of my art. Sometimes this has meant researching global internet access, sometimes data visualization, sometimes found movement, and sometimes large quantities of images. Sharing interesting information that I come across on my blog is something I do for further background on projects, and because some of the stuff I've found is really fabulous. In addition, some of my finished projects include specific information that is relayed as part of the work's concept. When this happens I think of the art as a data visualization, and it has to be clear, direct and informative. I never want my work to be dependent on reading the label to get its ideas across. Other projects are supported by my research, but factual data is distilled and abstracted in the final piece and has become something else, more aesthetic.

SS: What's next for me job-wise is finalizing plans for national syndication of CAR, which I've been working on for the past year. I'll also be overseeing the upgrade of the current CAR site so that the interface is more user-friendly and the large quantities of content on the site are more prioritized to artists' interests. And on September 29th, I’m moderating a panel on social media strategies for artists at Chicago Artists Coalition.

Art-wise, I have a solo show at Counterpath Gallery (Denver) which opens September 2nd. I'll be their inaugural show. And in October I'll be doing an 'Artists Connect' talk at the Art Institute of Chicago, discussing my work in relation to Agnes Martin, Sarah Sze, Olafur Elliasson and others. For the end of the year I’m learning to code and developing an interactive data visualization for the Apps for Metro Chicago Competition, based on data from the city’s new open data initiative. I am also beginning to develop a new movement/new media/installation work that involves performing a social network.

Longer term, sometime next year, I am doing a project at Minus Space (Brooklyn) in their new Dumbo space. I’m excited to work with Minus Space because their invitation to join their flat file has really influenced my work over the past two years. Applying the lens of minimalist reductive art to what I do has egged me on to try new directions and distill my ideas into simpler forms. 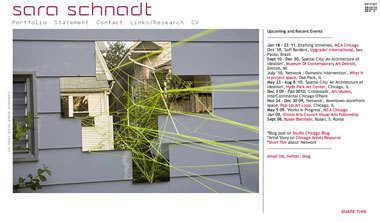 Image Credits: John Sisson and Courtesy of the Artist