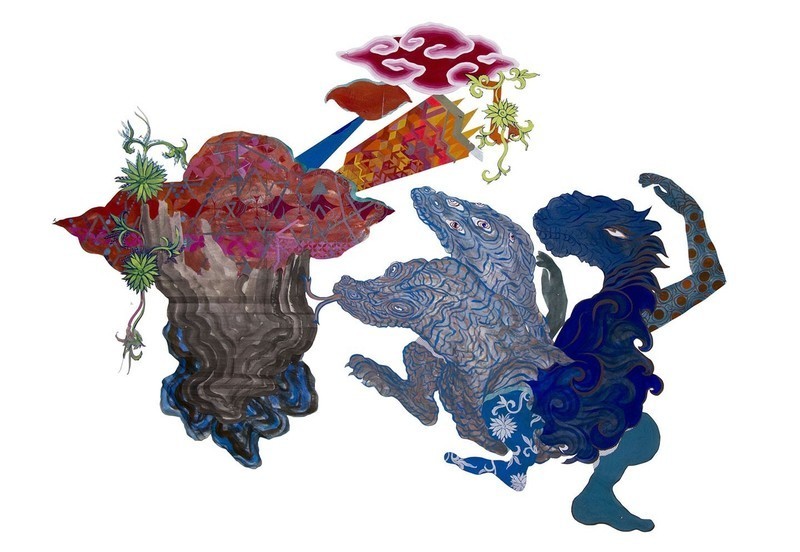 DIYAN ACHJADI uses painting, drawing and printmaking to investigate the visual languages and meanings of ornament and pattern. Informed specifically by the "(mis)representations, (mis)translations, and imaginings of Indonesia," her works often include the hybrid animals of Javanese myth, references to historical textiles and dizzying mash-ups of pattern and popular imagery. Diyan has exhibited widely across Canada and beyond. Recent projects include a  year-long commission for the City of Vancouver Public Art Program called Coming Soon! and NonSerie (In Commute), part of How far do you travel?, a year-long exhibition on the exterior of public buses commissioned by the Contemporary Art Gallery (CAG) in partnership with Translink BC. A publication documenting Coming Soon! is available for purchase through the Contemporary Art Gallery. You can see Diyan’s work in the exhibition The Tin Man Was A Dreamer at the Vancouver Art Gallery through November 1, 2020. Diyan lives and works in Vancouver, Canada.

OtherPeoplesPixels: What do you say to people who dismiss pattern and decoration as superficial?

Diyan Achjadi: We need to constantly unpack the ways that we arrive at these types of judgements and recognize the implicit and explicit biases at play. Racism, sexism, and white supremacy inform, produce, and reproduce problematic notions of good and bad taste, as well as notions of "real" or "superficial" work. The dismissal of pattern and decoration is a form of reifying modernist European paradigms. We know that patterns can be deeply infused with symbolism and meaning. We also know the ornament and decoration as material history hold many clues as to the ways that images and information circulate and are reproduced. For instance, there's an ornamental cloud form that I often draw, based on a batik pattern found in Cirebon, a city on the north coast of Java, where some of my father's family are from. This pattern, called megamendung, is emblematic of this city and seen everywhere—on uniforms, as architectural detail, as wrapping paper, for instance. This cloud has similarities to cloud forms one might see on Chinese textiles or painted ceramics, which one could see as an artifact from centuries of international trade, exchange, and in the batik pattern is a synthesis of multiple cultural influences. 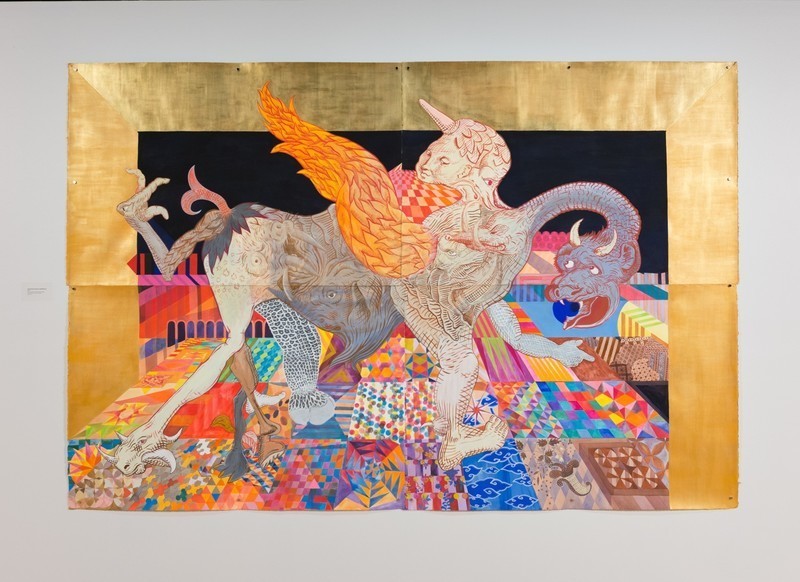 OPP: Tell us about Creature Drawings (2015-2016) and Venationes (2014-2015). How do you employ mythic creatures to talk about both dissonance and harmony when the decorative languages of two cultures collide?

DA: These two groups of works have slight differences. In Creature Drawings, I wanted to explore spaces of hybridity, where there's not a fixed understanding of place, time or logic and to imagine a space where different forms of visual language that are often seen as not belonging together co-exist and build off of each other. The creatures become a way of articulating a personality or narrative within this space. For instance, the title of Unfashioned Creature, Half Undone is a line from Mary Shelley's Frankenstein, which was a way for me to allude to questions of hubris. Back and Forth has a two-headed monster (acknowledging that the idea of the monster is also culturally loaded) going in opposite directions simultaneously, resulting in stasis. In these works the creatures are explicitly fictional. 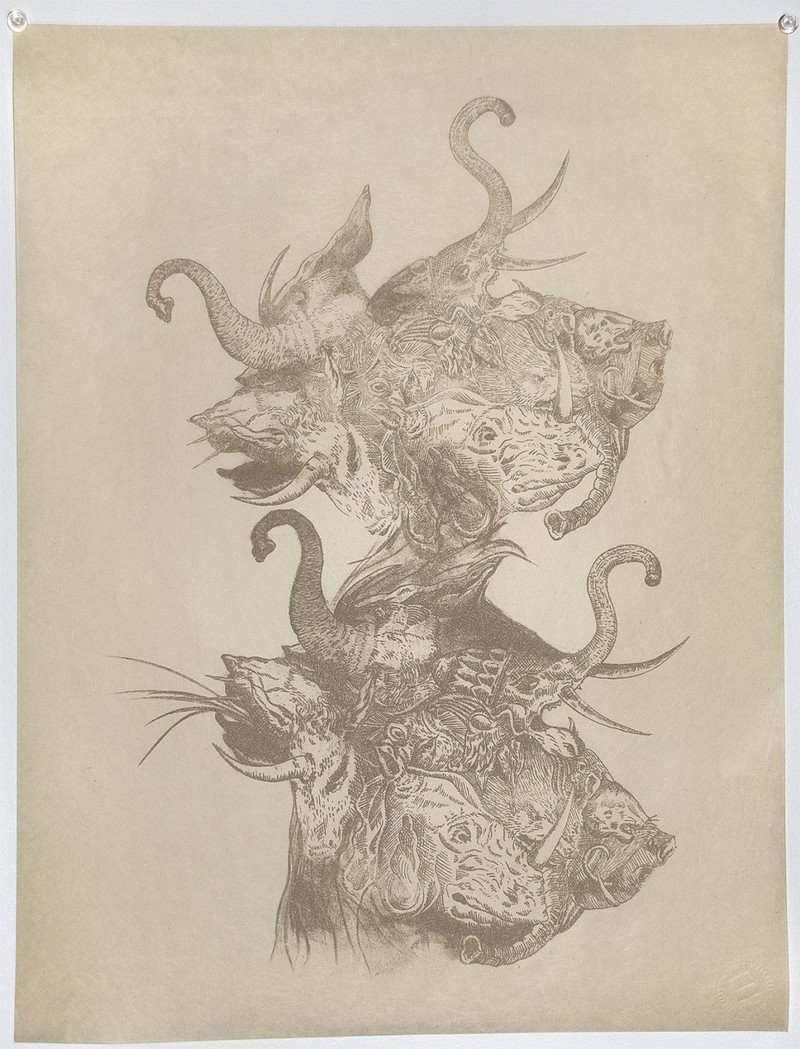 OPP: And what is different in Venationes?

DA: I was responding to a 16th Century book that was meant to be factual but included images of dragons and unicorns within the volume as if they really existed. I was doing some research on how Europeans imaged animals from Asia in printed matter, which led me to a book about hunting games.

The creatures in this series of prints are more about trying to understand the ways that we value certain parts of non-human animals as valuable or precious—such as tusks—and the violence in that gesture. 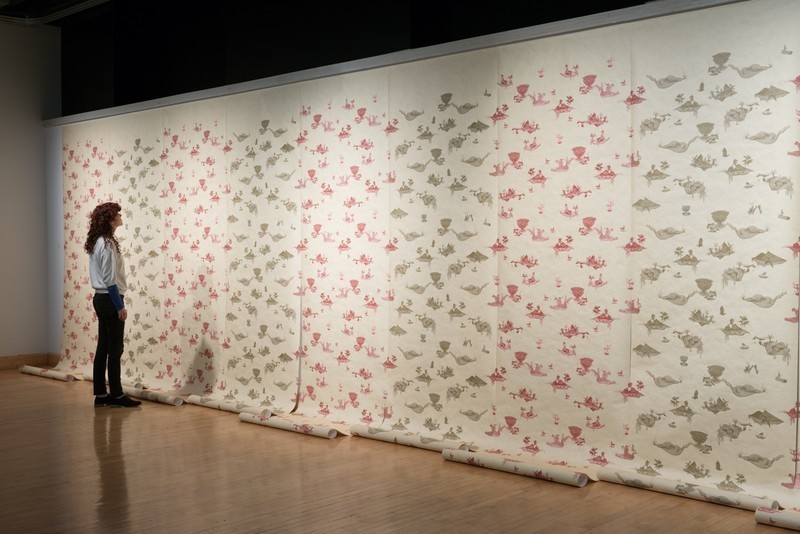 OPP: What does Toile de Jouy mean to you?

AD: The patterns associated with Toile de Jouy, with its intricate lines and drawings, were made possible through advancements in printing technologies. So, from a printmaker's perspective, they've always held a place of interest for me. As a form of decoration, I have also been fascinated by the types of scenarios that are often portrayed in these patterns, such as European pastoral tableaus and fantastical Chinoiserie landscapes. The form is also tied to imperialism and colonialism, from the aspects of production to the images portrayed and the spaces that these patterns would populate. 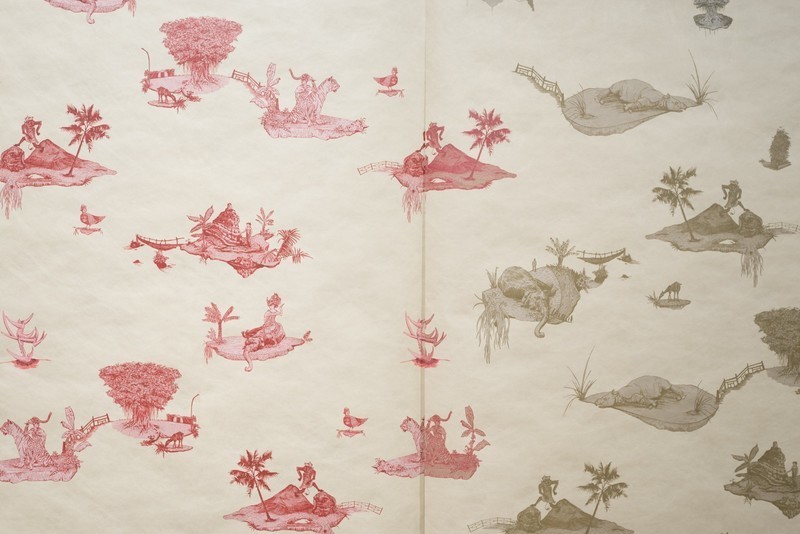 OPP: Tell us about the new content that you have injected into this old pattern in False Creek Toile (2016) and Java Toile (2015).

AD: For Java Toile, I began the project by thinking of the extinction of non-human animals that used to populate the island of Java, where I am from. I wanted to make links between that extinction and land exploitation, commerce, capital, and tourism. The drawings respond to  archival images, postcards, news images, ceramic figurines, and photographs that I've taken on my trips back home. For False Creek Toile, I was thinking of lost landscapes in parts of Vancouver that were once water, but have in the past century been filled and are now asphalt and concrete. 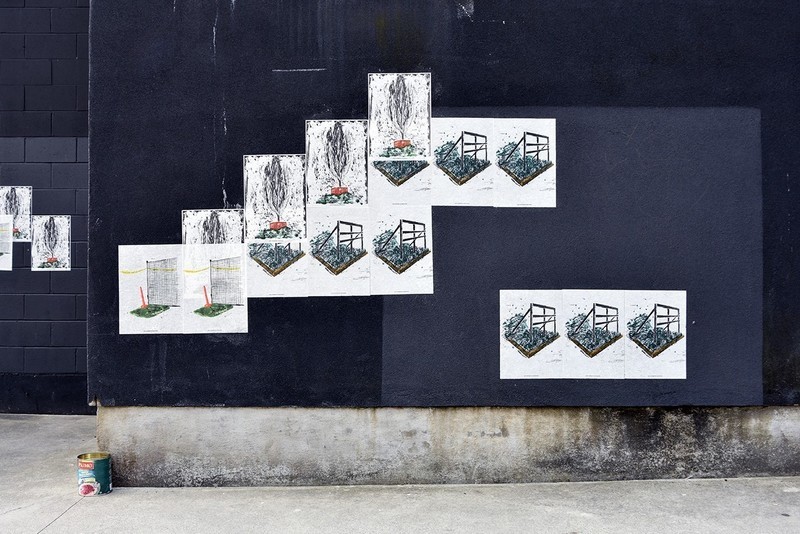 OPP: Your recent project Coming Soon! (2018-2019), commissioned by the City of Vancouver Public Art Program,is visually distinct from previous work. Is this a new direction or an outlier? Or did the project grow naturally out of previous works?

AD: I’m not sure if it's a new direction or an outlier! While it looks different visually than many other works that I've exhibited, it was made concurrently with drawings such as Sinking or Dip. Some of the core aspects of the project—questions of value, labour, time, craft—are a consistent thread throughout my practice. I have also always had an interest in art that circulates beyond traditional white-cube gallery spaces, whether in domestic contexts, ephemeral posters, or animations made for public spheres. The project also grew out of a desire to spend more time in the print studio. I teach printmaking and am very immersed in its techniques, contexts, and history, but so much of my recent work has been in drawing. I wanted to make a concerted investment into these techniques and make printmaking visible in my practice in a way that I don't think I have before.

The history of printmaking as a mode of distribution is intimately intertwined with the technologies of image and text reproduction. I was curious to make a public project that was anachronistic, where its modes of production used processes that were once considered quick and impersonal, but now are seen as rarified and craft-centric. I also wanted to invite passers-by to pause at what they were seeing. The works were all posted or pasted on temporary construction fences that usually have notices, advertisements, and the occasional graffiti. My hope is that passers-by will notice the prints and start to pay attention to what was happening behind these fences. In many ways I approach my drawings in a similar way, where I hope to invite a slowing down in the process of looking. 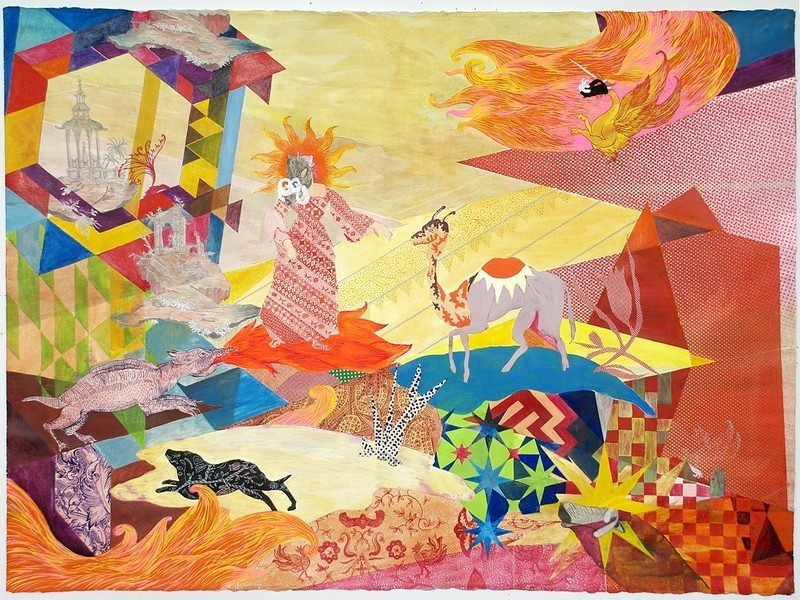 OPP: How are you coping with life during a global pandemic? How is your studio practice being affected?

AD: I’m very lucky in that I have stable employment and have continued to have work throughout this. I'm also very lucky to be in Vancouver at this time, where we are now finding ourselves in a slow, cautious, and measured reopening. I have been thinking through what it means to make things in the studio, and what and who I am making things for. To make pictures is always a strange activity, and now it seems even stranger than ever. With the isolation and changing social structures necessitated by the pandemic, I find myself wanting to work on things that give me a sense of connection, dialogue, and community.

I've been working on a four-person drawing project that started just before everything shut down, with three friends and colleagues from graduate school—Ilga Leimanis, Melissa Manfull, and Doreen Wittenbols—where we have been mailing drawings to each other, and responding to the previous person's mark making and imagery before sending it on to the next person. It's been really lovely to get these large drawings in the mail and be in dialogue with these three other artists through this process. I'm realizing more and more how much I value working collaboratively, and the challenges and joy in the process of figuring things out together. I've been making a few very short comics in response to assignments from another friend, which have stretched me to think through narrative and storytelling more deliberately. I'm also beginning a new animation that will use some small, intimate watercolour drawings made in the past few months as its starting point. 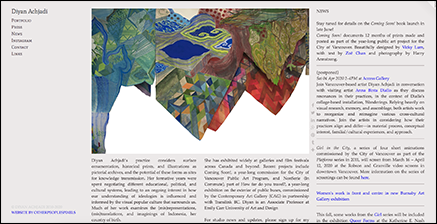