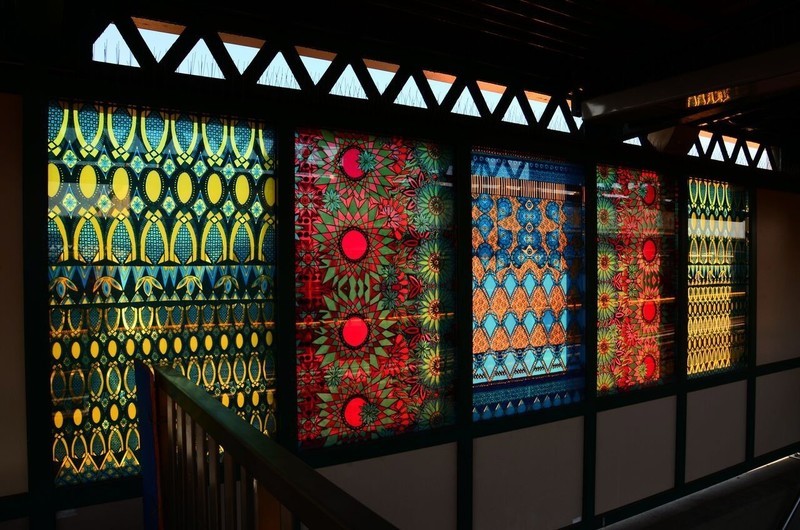 Inspired by craft objects and folk art, CARA LYNCH is staunchly opposed to aesthetic elitism. She embraces surface embellishment and pattern in sculpture, print and public works. She taps into the devotional power of heavily-encrusted talismans, while celebrating the visual pleasure of rhinestones, feathers, beads and glitter. In 2012, Cara earned her BFA in Studio Art with a Minor Art History at Adelphi University (Garden City, New York). Since then, she has studied Printmaking at Columbia University, Papermaking at the Women's Studio Workshop in Rosendale, New York and Advanced Sculpture at Hunter College. Cara recently closed her solo show Love Tokens and Talismans, supported by Queens Arts Council Grant, at Local Project (Long Island City, Queens). In spring 2016, she installed her first permanent, public work for the NYC Metropolitan Transit Authority at Ditmas Avenue stop of F subway line in Brooklyn. Cara lives in New York, New York.

OtherPeoplesPixels: Tell us about your research into the “sailor’s valentines, mourning jewelry, memoryware, kitschy trinkets, and historical amulets or talismans” that informed your recent body of work called Love Tokens and Talismans.

Cara Lynch: I have an interest in those things that are not traditionally included in the fine art world: craft objects and processes and folk art. I am interested in why we make things and the purposes and power of these objects. I see the embrace of these traditional crafts as a political statement when included in a fine art context or conceptualized in this way.

While my research for this particular body of work initially began viewing images online, I also spent time at the New York Public Library looking through books of reliquaries and walking through the Met looking at various ceremonial and talismanic objects. I spent time at the Morbid Anatomy Museum in Brooklyn, pouring over their incredible collection of books on mourning jewelry and love tokens. Many of the forms I created are directly influenced by these objects, but my main interest is in the traditions and functions of these objects: to memorialize experiences, express devotion or provide protection or good luck. 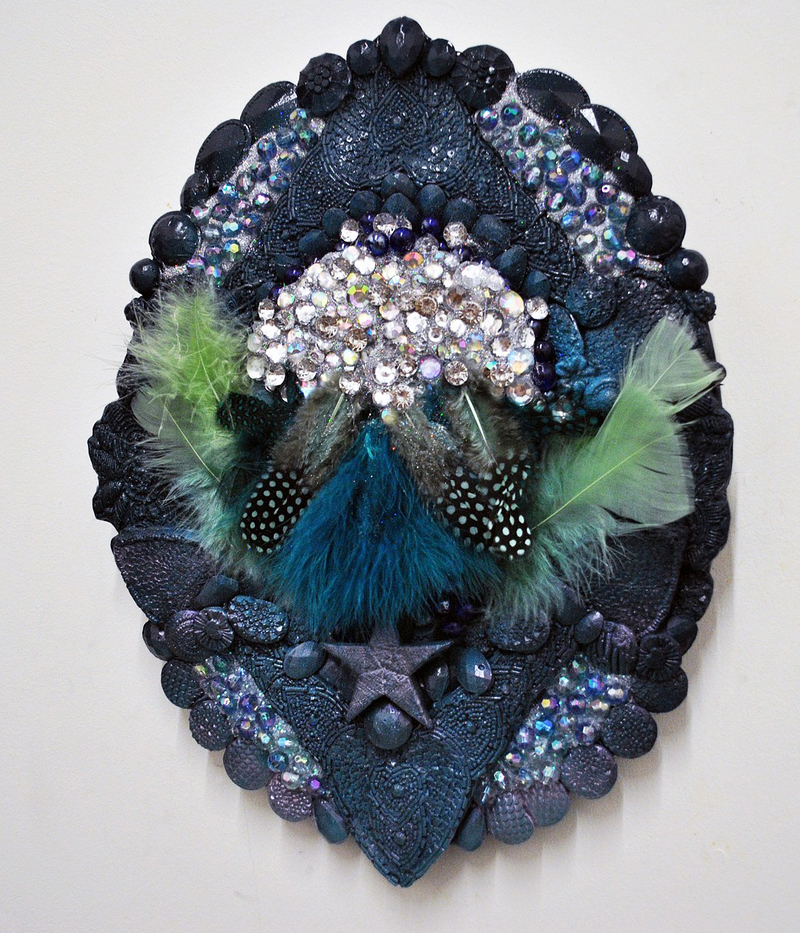 OPP: How do these influence manifest in your sculptures? What are you loving, mourning, remembering or warding off in this work?

CL: I grew up very Catholic, and I am very interested in how objects become symbolic or get their power. For Catholics, the Eucharist, rosaries and other sacred objects are given their power by the beliefs of the faithful. In some other religions, this is not the case; the power becomes inherent in the object itself. As artists, we are granted a certain power through our making of objects. In many ways, making becomes our faith.

The sculptures are very much about my own experience, mourning the passage of time and struggling with the reality that we can’t always attain our desires, whether for physical objects or for abstract experiences, like equality or affirmation or holding on to the present. The pieces combine casts replicating a number of objects I’ve saved from my childhood or collected from trim stores along my walk to work through the garment district in New York. I am memorializing my own experience through these pieces, as well as empowering the “non-elite” in some way.

There is tension expressed in these objects: between high and low, art and craft, class and taste, sentiment and spectacle. By embracing the decorative and the domestic—newer pieces sometimes include casts from copper cake pans—I hope to grant power to myself and to all women. By embracing “low,” craft materials, and elevating them in some way, I am making a political statement for the working class and challenging “high art” and academic aversions to the decorative. By creating beautiful objects, I make my fantasies attainable in some sense. 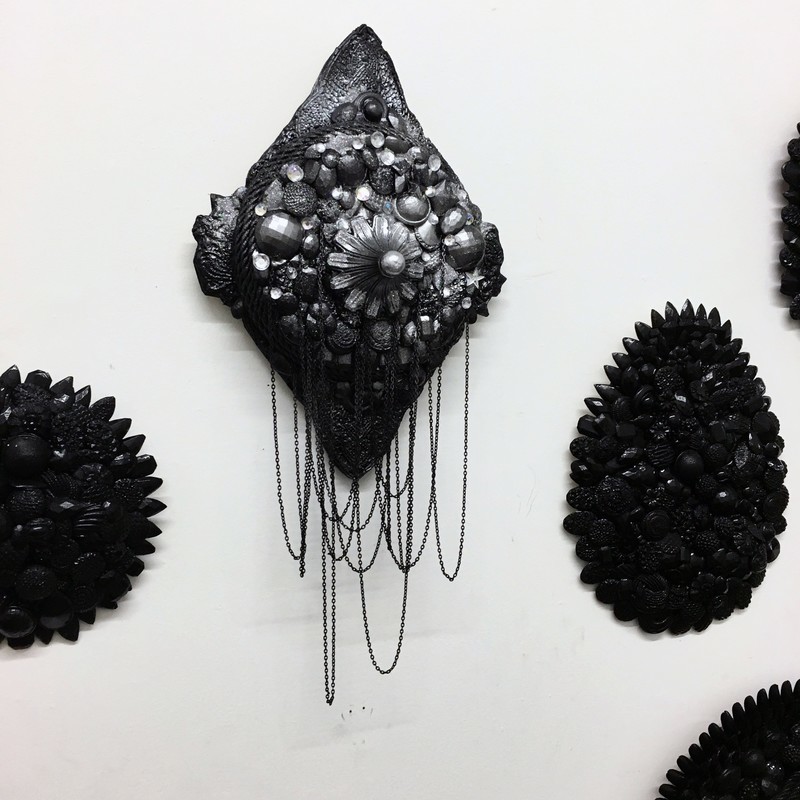 OPP: Your talismans are cast hydrocal, embellished with automotive paint, spray paint, glitter, faux pearls, rhinestones, chains, and tassels. It’s visually hard to separate the solid, cast object from it’s surface embellishment. Can you talk about these two distinct parts of the process: casting a solid substrate versus embellishing it?

CL: I am very interested in embellishment and the decorative. I think this stems from my interest in both thinking about desire and devotional objects. The solid cast objects are kind of funny, because they really are embellishments themselves, made more concrete and solid through a transformation of material. Embellishing the transformed embellishment seemed to be really aggressively decorative or feminine—a little like overkill and kind of funny to me.

Casts are also reminiscent of memories. They are a replication, an attempt to reproduce. The embellishment allows me to put this sentiment in tension with other interests. I am able to temper the feminine quality with a little bit of masculinity, for example, through the application of automotive paint. 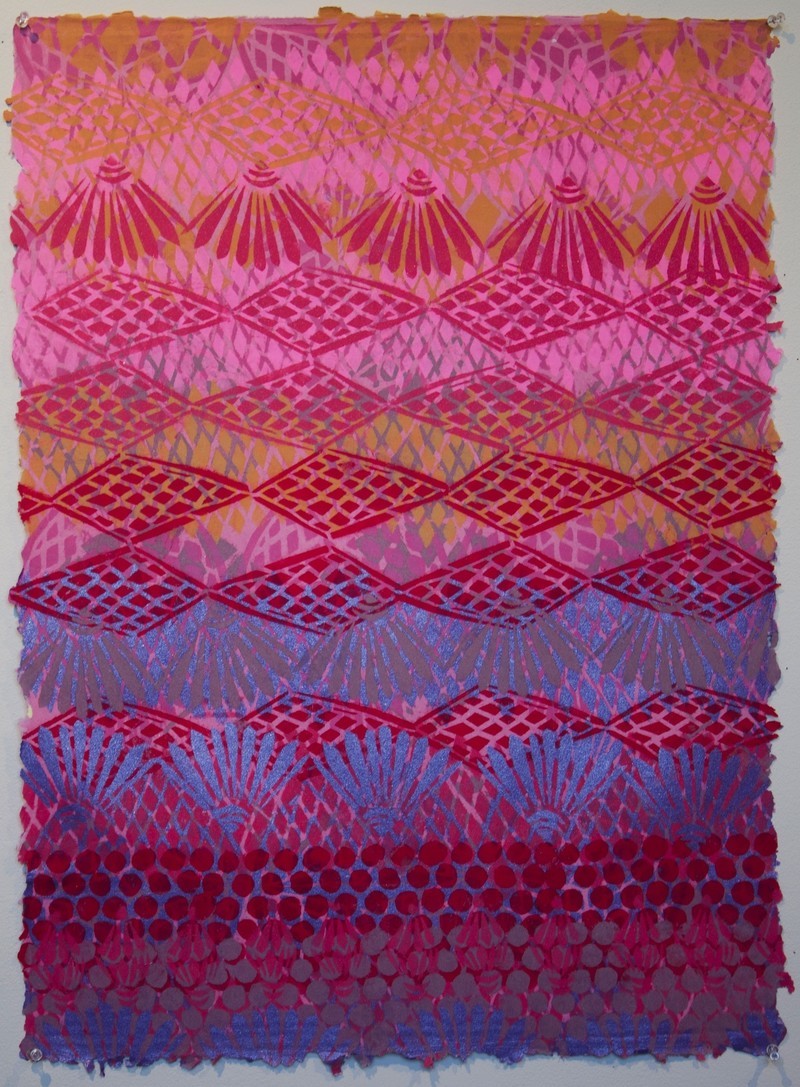 OPP: Your pulp paintings appear to be speaking the same language as painting, drawing or print, but these designs are actually part of the substrate, not added to the substrate. Can you briefly explain the process for those not in the know about paper-making techniques?

CL: Paper-making is a really amazing process. Plant based fibers are beaten into a wet pulp, then suspended in water and caught on a screen to form a sheet. Pulp can also be pigmented and “painted” with. Essentially, you are creating an image with a very physical material itself in various colors, rather than with paint, ink or pencil. It has a temperament of its own.

To create the colors and patterns in this series, I pigmented the actual pulp in separate batches. The various hues of pulp were stenciled and layered onto wet sheets of freshly pulled paper, building up in some areas more than others. After working on a wet piece for some time, It would be pressed, combining layers of material into one flat sheet. In this way, the patterns are part of the actual paper, not applied to the surface. 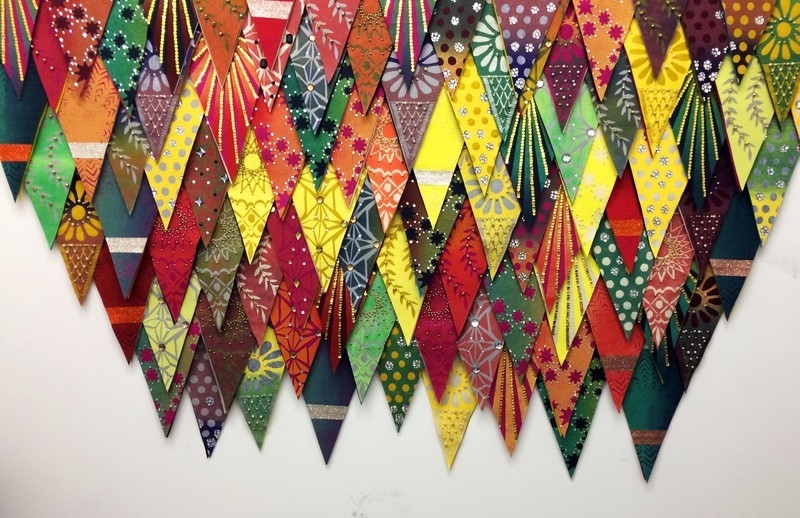 OPP: In Pennants for the Working Class (2016), you’ve transplanted the “patterns derived from American household glass objects, including depression glass, carnival glass, and early American pressed glass,” from utilitarian, three-dimensional objects onto the flat surface of the flag, which has a more symbolic function. Can you talk about the functions of pattern in general and how you use it in your work?

CL: Pattern can draw attention to an object, create a tensions between surface and object, or refer to something beyond itself. In my work, pattern often symbolizes something beyond my initial interest in surface and decoration. In many works, I am referring to histories behind the patterns. In this case specifically, I see the patterns from these glass objects as symbols of the American dream. These patterns were found on glass objects that were highly affordable, widely available and also really beautiful. This is in contrast to their predecessor, cut crystal, which was only available to the wealthy. For this piece in general, I was really thinking of the pennant flag as a symbol of prestige and pride, borrowed from the vernacular of yacht clubs and ivy-league universities. 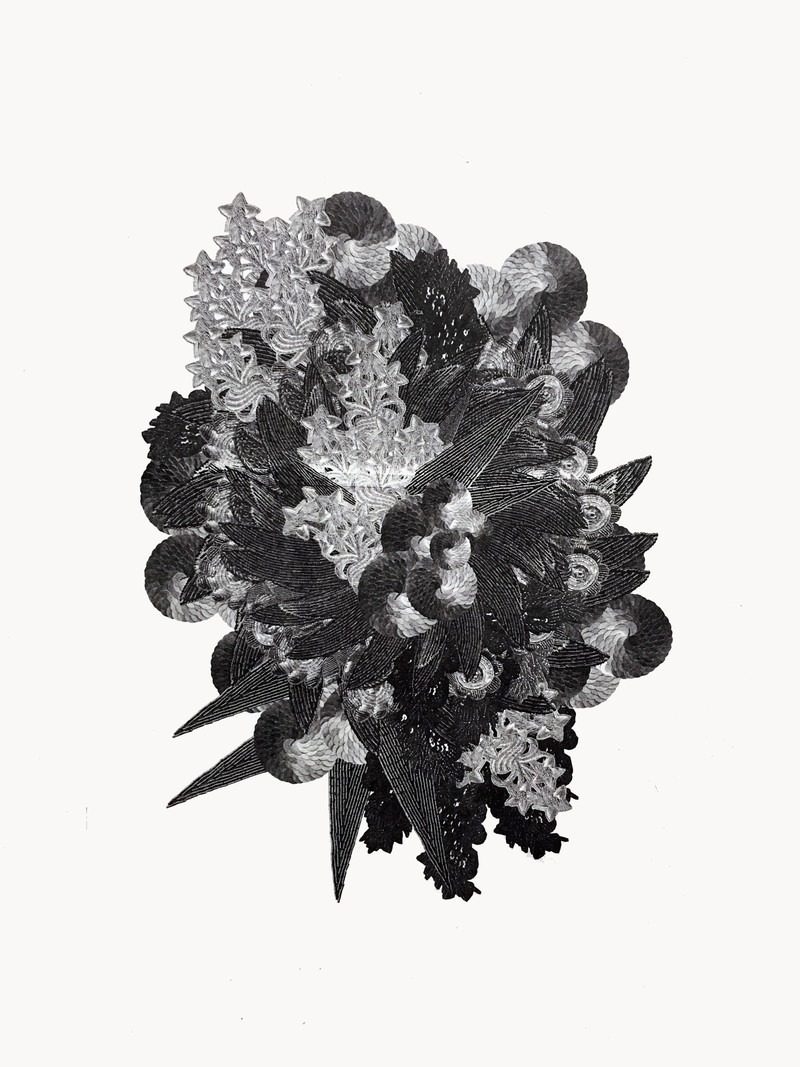 OPP: Earlier, you mentioned “academic aversions to the decorative.” Why do you think this aversion exists? Have you noticed a sea change in the last 5 years?

CL: I think this academic aversion to decoration and beauty is tied to a classist and sexist system. Higher education in the arts was sought partially to professionalize art making. The way artists did this was to become very "serious" about their work, substantiating it with theory and criticism. View points other than the dominant, historically-male—rooted in theory, science, knowledge—were left out of the picture. As Duchamp said, "artistic delectation is the danger to be avoided." This kind of thinking was perpetuated through the discourse, banishing beauty (and consequently, a slew of other things) from the presiding conversation. To some extent, beauty itself is a social construct, defined by social class, taste, gender, and a number of other factors. But this is all really interesting! I feel like we should be embracing it, instead of shutting it out.

I have noticed a change in the last few years. The Pattern and Decoration Movement artists really began this years ago. I think a number of artists are really embracing and playing with decoration and beauty today. I immediately think of people like Polly Apfelbaum, Jim Hodges, Grayson Perry, and younger artists like Jen Stark and Evie Falci. The embrace of contemporary art by the mainstream I think, in part, has encouraged this.
However, I think some very highbrow academic circles continue to resist decoration and beauty. This may be because they have the most invested in the dominant discourse. . . Beauty isn't serious enough for them. 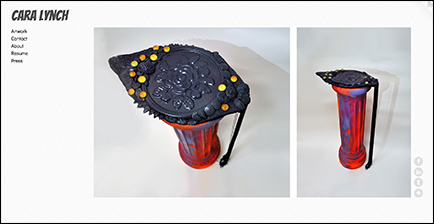 To see more of Cara's work, please visit www.caralynchart.com.Featured Artist Interviews are conducted by Chicago-based artist Stacia Yeapanis. When she’s not writing for OPP, Stacia explores the relationship between repetition, desire and impermanence in cross-stitch embroideries, remix video, collage and impermanent installations. She is an Adjunct Assistant Professor in the Department of Fiber and Material Studies at The School of the Art Institute of Chicago, where received her MFA in 2006, and was a 2011-2012 Artist-in-Residence at BOLT in Chicago. Her solo exhibitions include I Still Haven’t Found What I’m Looking For (2013) at Klemm Gallery, Siena Heights University (Adrian, Michigan), Everything You Need is Already Here (2014) at Heaven Gallery (Chicago) and When Things Fall Apart, in the Annex Gallery at Lillstreet Art Center (Chicago). Stacia created site-responsive installations for two-person show Form Unbound (2015) at Dominican University's O’Connor Art Gallery (River Forest, IL) and SENTIENCE (2016) at The Ukrainian Institute of Modern Art. Her work was recently included in SHOWROOM, curated by Edra Soto, at the Chicago Artists’ Coalition. Stacia is currently preparing for a two-person show titled Resist the Urge to Press Forward with Brent Fogt at Riverside Art Center (Riverside, Illinois) and Sacred Secular, a solo show at Indianapolis Arts Center in Indiana.