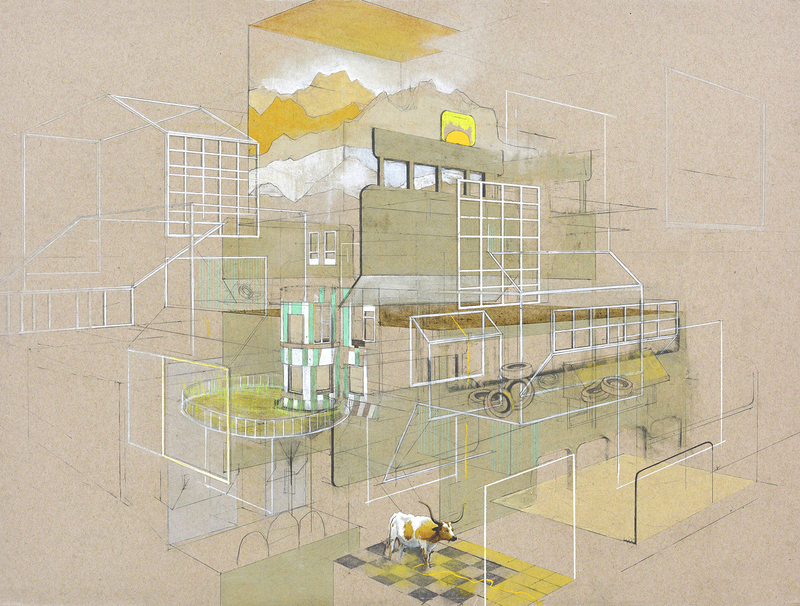 ALYSSA DENNIS renders architectural spaces as transparent layers and plexiglass sculptures that reveal that walls are not only physical constructions but also social constructs. Her work exposes the underlying connections between sections of our environments that we conventionally experience as separate, highlighting the way this collective myopia leads to waste of life and resources. Alyssa has a BFA (2003) from Maryland Institute College of Art and an MFA (2011) in Painting from Tulane University. She has also studied Herbal Medicine at Maryland Institute of Integrative Medicine and Mayantuyacu: Center for Study of Medicinal Plants in Peru. In 2016, she founded Common Knowledge "to promote education on wild edible and medicinal plants, found specially within the urban landscape." She has exhibited at Pulse LA, Pulse NYC and Pulse, Miami as well as Fountain Art Fair, and is currently showing work with Causey Contemporary in New York. In 2016, she did a collaborative building project with New Orleans Airlift. Alyssa lives and works in Brooklyn, New York.

OtherPeoplesPixels: What role does transparency play in your drawings?

Alyssa Dennis: Transparency plays a large role in my work. It’s constantly the point I’m trying to get to. To build the layers as if to represent a kind of schematics. I’m very much interested in systems and feel they play a big a part in the positive and negative aspects of our effect on the planet. It isn’t necessarily about the individual human but our inability to conceptualize and visualize the system. If we could see the part we all play, however small or large, in the system I believe a vast consciousness raising would occur. I think the newer work and my sculpture visualize this transparency more than perhaps the older work. 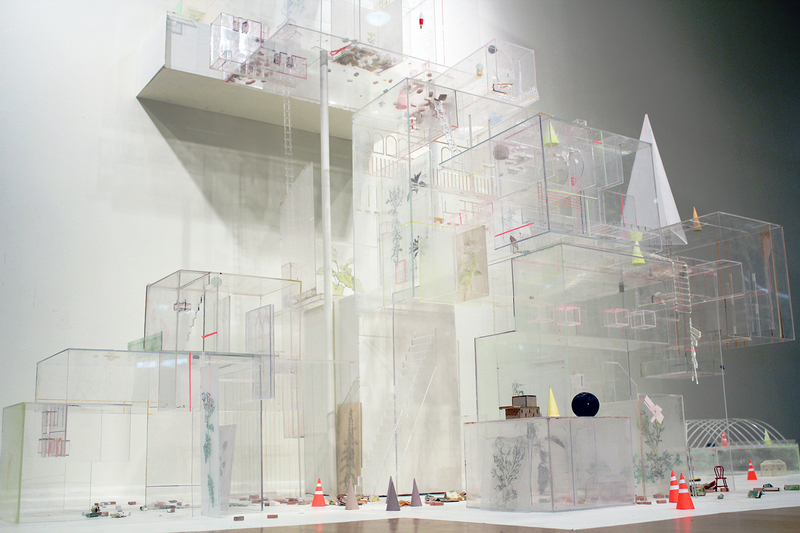 OPP: In Striped Opacity Construction Playground, which has multiple iterations, the transparency in the drawings is rendered in sculpture. What led you to shift from drawing to sculpture? What does the sculpture offer that the drawing can’t, and vice versa?

AD: Seeing how any idea renders in different material contexts should always be part of the process. I work on drawing and sculpture simultaneously and find they have a very symbiotic relationship. I think that as a viewer and even as a maker, it’s helpful to have many different kinds of access points to your idea so that what you’re trying to say becomes clearer and clearer. (I kinda made a pun…hahaha). The sculptures drive home the importance of transparency, layering and modularity because viewers can literally see through each space into another. 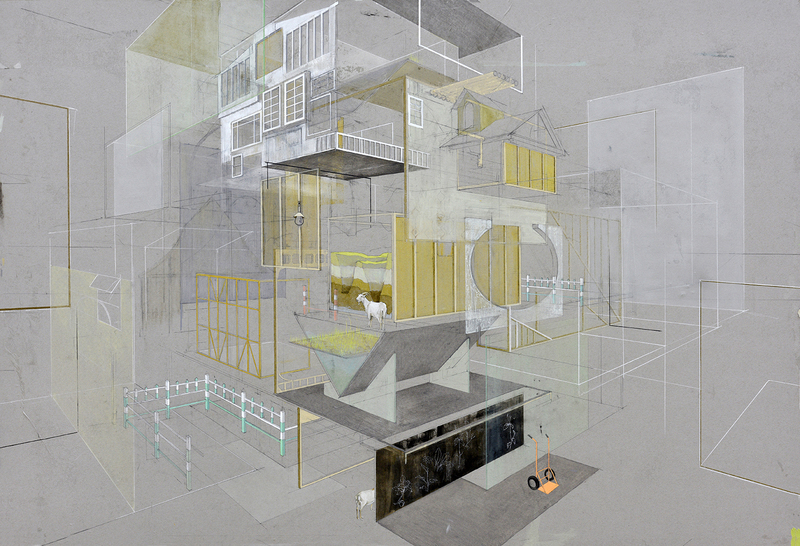 OPP: Zebras, horses, foxes, cows and other large animals often mill about your architectural structures. In most cases, I read their presence as a reminder that we humans have displaced other species with our structures. It’s like their ghosts are grazing on another plane right underneath our feet and we are mostly oblivious. Your thoughts?

AD: I really love that you were able to perceive that kind of message about the animals in my work. It is true that modern culture has displaced these animals but that their energy and our relationship with them remains very close. In that sense they are “right underneath our feet.”

I’ve been reading a lot of Clarissa Pinkola Estes work about archetypal myth stories that involve a lot of human interaction or human/animal hybrid relationships which help to explain different levels or plains of our psyche. I took a workshop about dream analysis. The instructor mentioned that the forms that materialize in your dream corresponded to different parts of your psyche. Dreaming of humans is more closely related to the conscious mind, while dreaming of animals is more closely related to the subconscious. The animals are a way of accessing things that are hidden. All of my work is an act of some kind of revealing and opening or at least something in transition or modulating before it closes again. For example, in Cycle Resource the goat, a symbol of the revealing or unveiling, stands almost in the center as if some sort of mascot. When I first started drawing zebras in Striped, I was thinking more about skins. Skins of buildings and skins of animals. I have also always thought of stripes as closely related to human manipulation and manufacturing, something outside of organic forms. 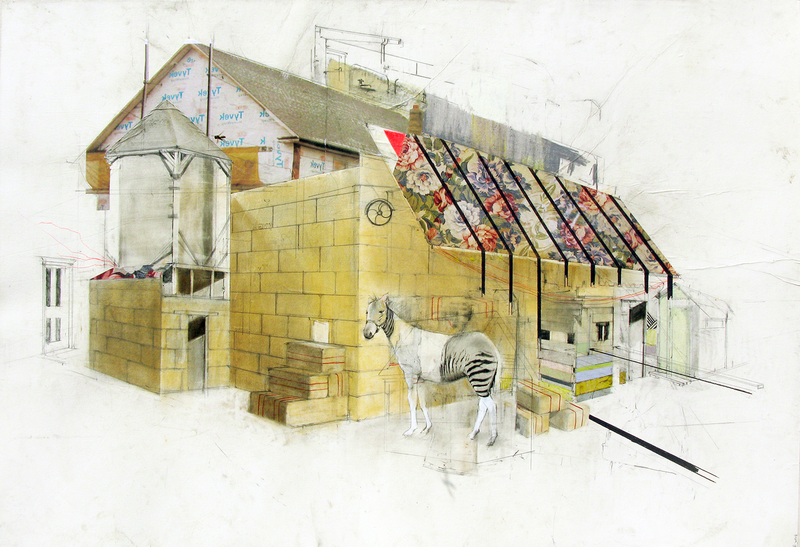 OPP: Billboards, tires, buckets and oil drums also litter your spaces in excess. These seem to be another reminder of how the constant forward motion of “Progress” has consequences. Do your drawings offer a solution about the wasteful byproducts of Capitalism?

AD: I don’t think my work or most art in general offers concrete solutions to major socio/economic issues but offers a surfacing and an articulate unveiling of what the issues are. People working collectively will always be the solution.

You are right in that these forms of material culture do symbolizes systems of capitalism. They are definitely excess waste in the physical world, but in the context of my work, this kind of material culture is in transition. It is at the end of its life as we restructure and modulate for a new beginning. A well known art critic gave me some feedback once on my work and the first thing she mentioned was that she got a strong sense of momento mori which translates to “being mindful of death.” The harmful systems in which we live are not working for the survival of life and should be shed or discarded lest we be shed or discarded. 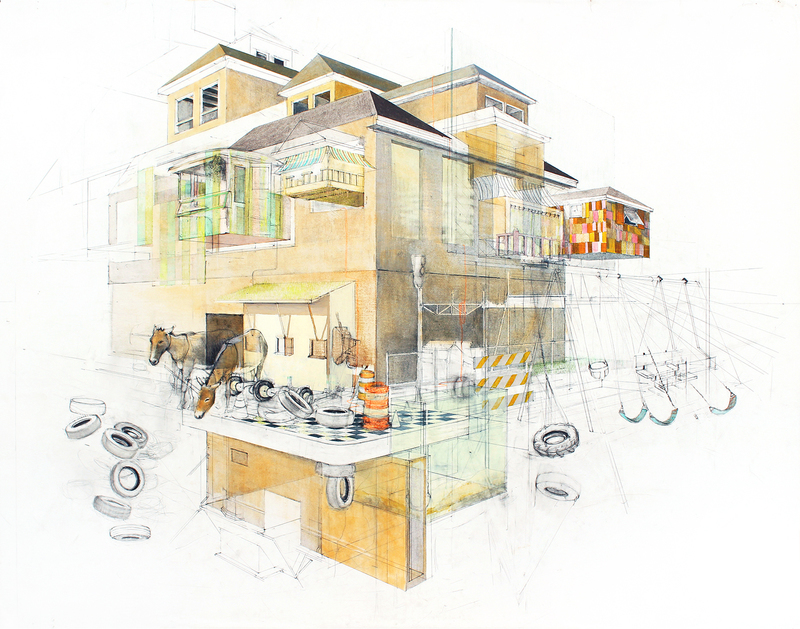 OPP: Tell our readers about your new project Common Knowledge, which was funded by a successful Kickstarter Campaign.

AD: Common Knowledge promotes wild edible and medicinal plant education through a visual vocabulary of illustrations accessed through interactive and participatory learning tools. This particular iteration of the project highlights species that flourish abundantly in every city of the Northeastern U.S. The human kinship with plants can be traced through time, giving us a window into the historical and cultural contexts of our surroundings. Common Knowledge opens a conversation about these contexts while connecting us to the natural rhythms and cycles of our urban environment.

It is my belief that upon observing these special plants you become part of a larger movement to renew and strengthen the relationships of our interconnected community of humans, plants, animals and insects. It is an idea rooted in green philosophies, alternative pedagogies, nutritional activism and the principles of a gift economy. We conduct workshops, construct installations and have created a growing line of household products including card games and activity-based coloring books.

OPP: Can you offer any helpful tips to artists using Kickstarter for the first time to fund their work?

AD: (1) Think of a Kickstarter campaign as opening a pop-up shop and get 5-10 really affordable items prepared and ready. It’s important to have these items ready because then you can photograph them a bunch to use in your video and to post to your campaign. Having enough photos to post to as many social media outlets as you can but also posting different things from different angles because people don’t like seeing the same images over and over again. (2) Think of the most reasonable amount of money. (3) Be prepared to have this be your life for a few months. It’s a lot of work. 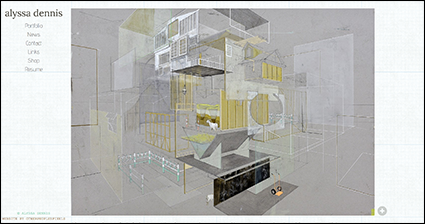