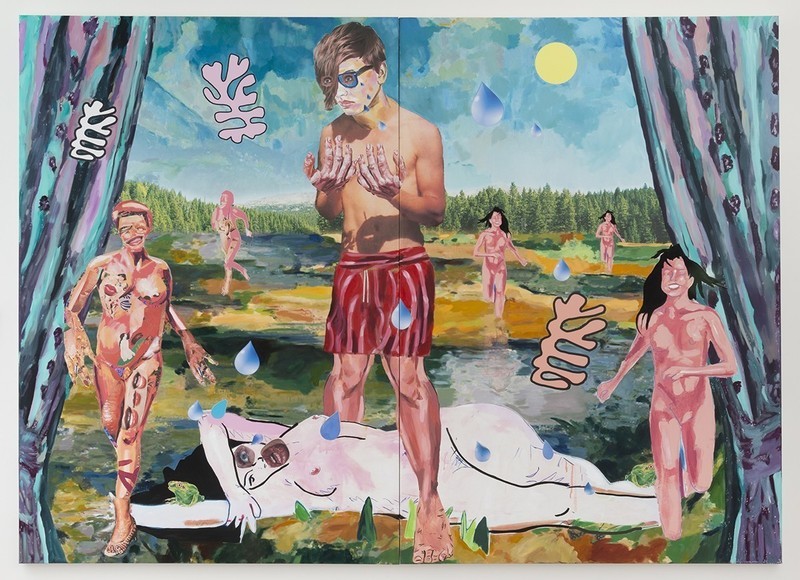 ALLISON ZUCKERMAN collapses the processes of painting, collage and photography into one another in wall-hung works and free-standing cut-out sculptures. Her imagery is a mash-up of sources from the Western painting canon to porn to cartoons and comics to fashion magazines. Across these realms of visual culture, she examines gendered power dynamics and their relationship to the imagery we consume. Allison earned her BA at the University of Pennsylvania, Philadelphia in 2012, followed by her MFA at The School of the Art Institute Chicago in 2015. Since then, her work has been included in group shows in Chicago, Copenhagen, New York and Mexico City. Her solo show Act Natural is currently on view at Kravets Wehby Gallery in New York, NY. You can check it out until June 3rd, 2017. Allison lives in New York City.

OtherPeoplesPixels: Let’s start with Act Natural, your new show at Kravets Wehby Gallery (New York City) that will be on view through June 3rd, 2017. What thread ties this body of work to older bodies of work?

Allison Zuckerman: Satire ties the current body of work to the older. The desire to critique the power dynamics between men and women, told through a personal perspective, fuels most if not all of my work. 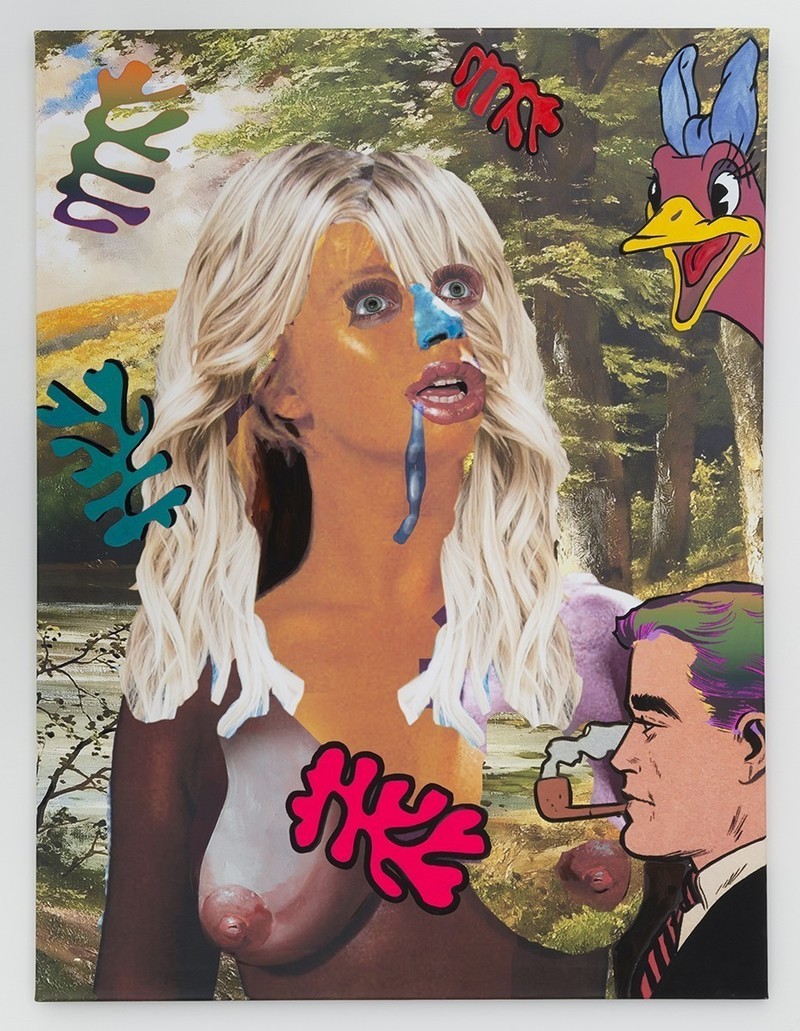 OPP: And what’s new in this show (thematically, formally or materially)?

AZ: Collaging seamlessly is materially new for me. Previous to Act Natural, I would adhere my collage to canvas but for this show, I opted to imbed my images in the paintings through a process of printing directly onto canvas. I planned a large portion of each painting, but left areas open to painting and improvisation.

Thematically, I’ve been working to create visual “mash-ups” of art history, my own imagery and internet culture. I am very interested in merging high and low art. I find that there is so much visual language available to us today, that visual sampling is an inevitable mode of creation. 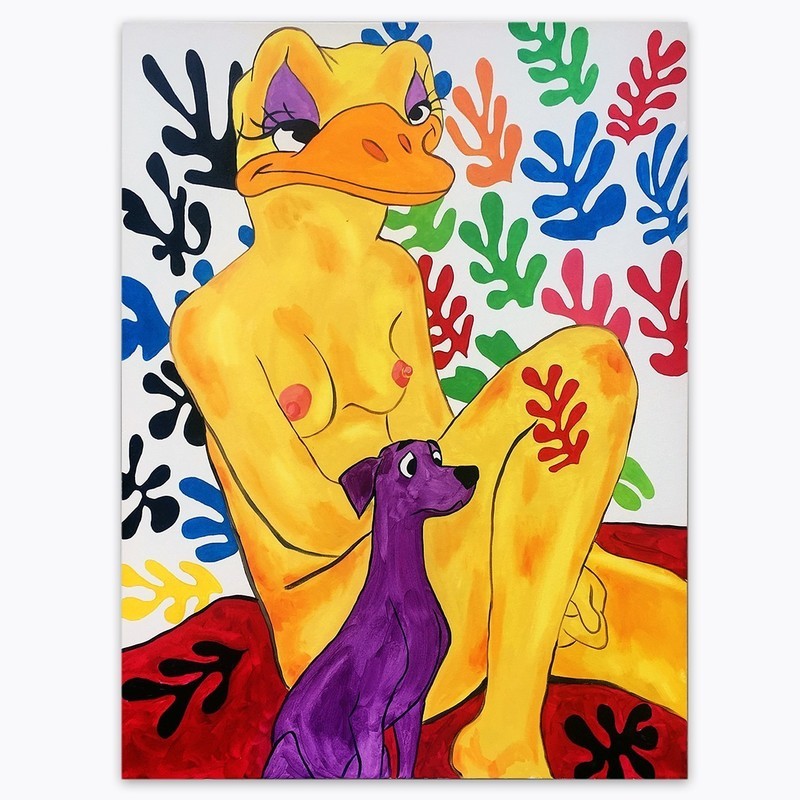 OPP: I’m with you on the fact that visual artists have so much visual information to respond to and that we should respond to our surrounding culture. And I think artists should think ethically about what to appropriate and to what end. Are there any sources that are off limits in your mind?

AZ: Being a dog person, cats are off limits.

OPP: Have you ever had your intentions in a particular piece grossly misinterpreted because your viewer didn’t understand what sources were being mashed up?

AZ: No—I think part of the fun of these works for the viewer is that they support multiple interpretations.

OPP: So how do you go about merging all these sources in terms of process? You mentioned that both painting and digital printing are at play.

AZ: I create oil and acrylic paintings and subsequently photograph them. I then integrate portions of the photographed paintings digitally into new work. After printing the hybridized piece, I add paint again. 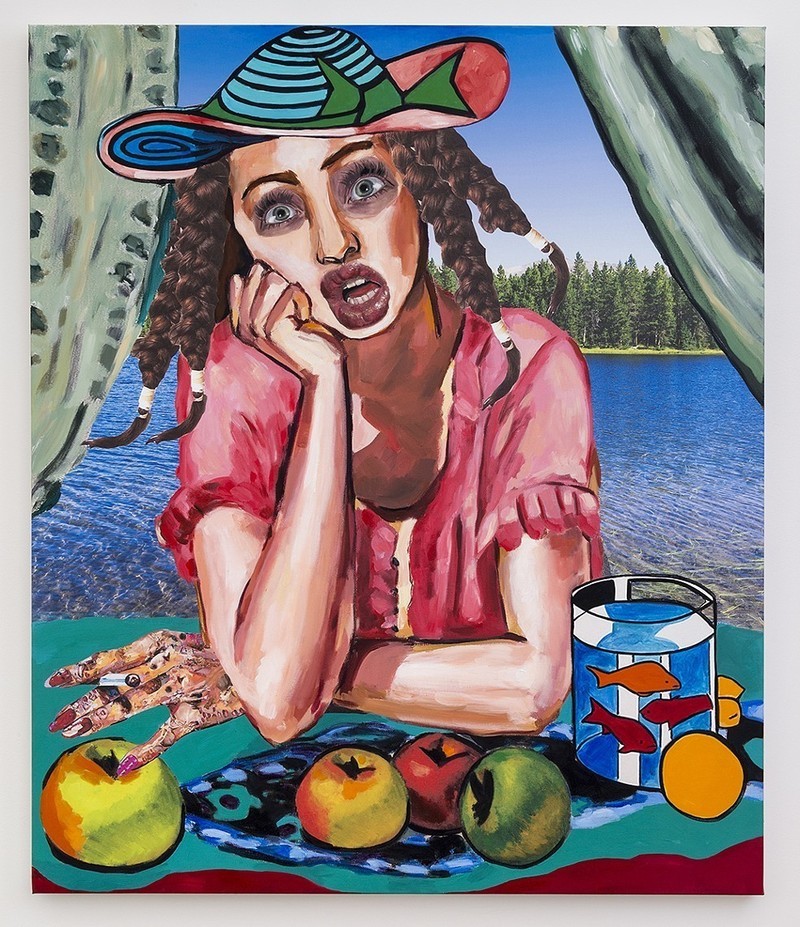 OPP: Tell us about the wide eyes which appear collaged onto the paintings? They work differently in each piece, sometimes creating a look of boredom, sometimes vapidness, sometime panic to the point of trauma. How do these eyes relate to the various representations of female bodies you reference?

AZ: The eyes are sourced from a large scale oil painting I created of my own eyes. I will sometimes repaint them, using the original painting as the source or will directly print them onto canvas, repainting portions of them, therefore changing them in some way every time they are repurposed. They relate to female bodies from pop and high culture in that they simultaneously activate and charge the bodies with subjective anxiety. To me, the eyes are like an “on” switch. The eyes make the bodies forces to be reckoned with, rather than passive bodies intended primarily for visual consumption.

OPP: What’s the significance of that repeated graphic motif that resembles cartoon seaweed or a stylized comb?

AZ: The cartoon seaweed/stylized comb is sourced from Matisse’s artist book Jazz, which contained prints of colorful cut paper collages. I use his shapes to not only imbue my paintings with movement but also to pay homage to Matisse and art history. 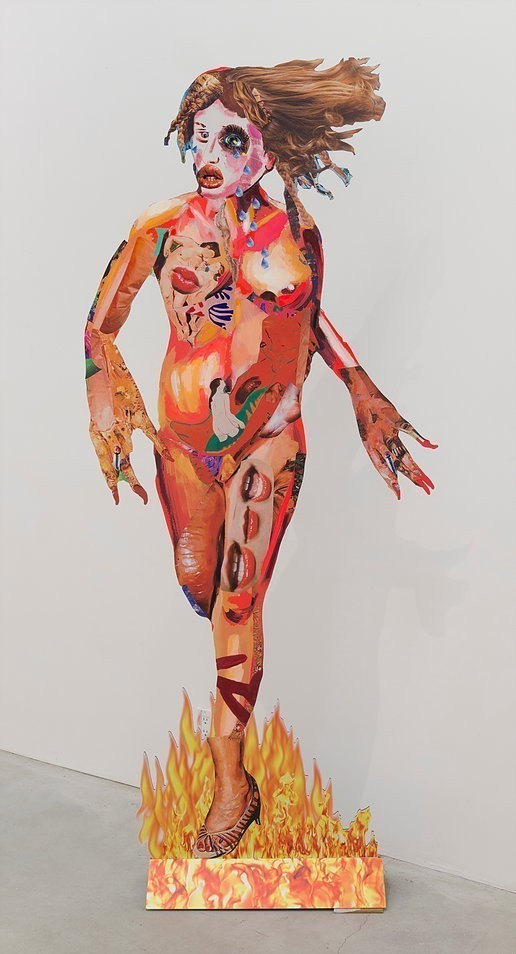 from She Rocks at Kravets Wehby Gallery, 2017

OPP: Tell us about the relationship between the conventional wall-hung paintings and the life size cardboard cut-outs. When did you first introduce the form of the cut-out into your practice? What do the cut-outs do that the paintings cannot?

AZ: The cut outs function as extensions of the paintings and are collage pieces that occupy the viewer’s space. If the paintings act as bricks, the cut outs are the mortar. I began using the cut outs during graduate school and because of their light weight, I was able to place them in public contexts as well and experiment with art interventions and performance. As I continued creating the sculptures, they became more intrinsic to my practice, and I began treating them like free standing paintings. Thus, I changed from creating them on cardboard and opted for aluminum. They are much more durable and archival, and reference phone and computer screens because of their one-sidedness, thickness and materiality. 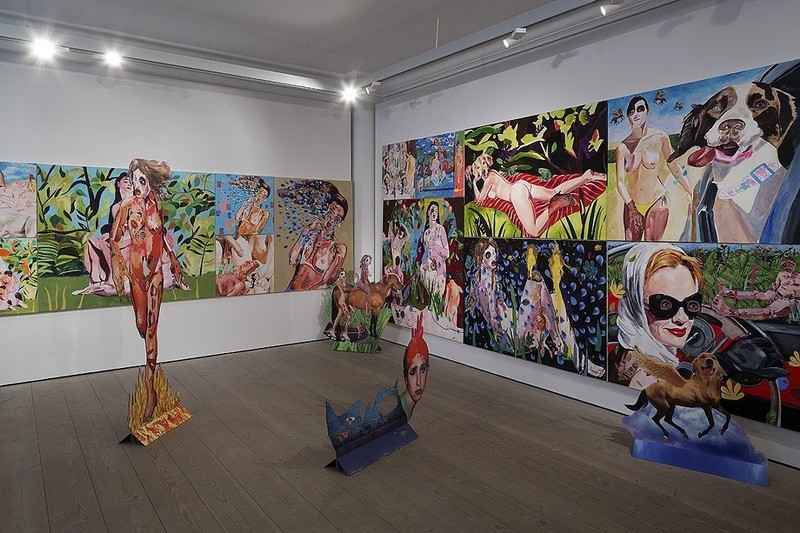 In Media Res II in Extract at the GL Strand, Copenhagen, 2015

OPP: You recently curated The Staging of Vulnerability for SPRING/BREAK Art Show in New York. Can you talk about this foray in to curating and how it relates to your painting practice? What was your curatorial strategy?

AZ: I approached this curatorial project much in the same way I approach my installations. I wanted to create a dream-like world with these artists’ work, using color, material and content to emphasize mood and context. For example, while one artist created a rose from thread, another painted a rose as a tattoo onto his figure. In another instance, a cut out sculpture of enlarged feet was placed in close proximity to a painting of isolated feet. Repetition of motifs tied the entire show together. I wanted the space to feel surrealist and liminal. To me, curating has so much in common with collaging, and I was very excited to have the opportunity to work with these talented artists to create an installation that functioned as a singular piece. 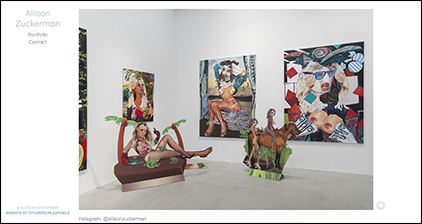