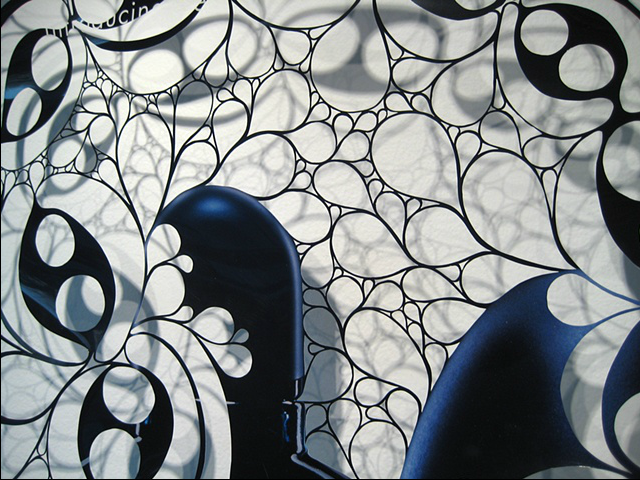 Other Peoples Pixels: Your most prevalent media is “cut duratrans” or “cut poster on paper.” Can you tell us more about your source material and about the process of cutting such detailed pieces? It appears to be precision work. Is there a lot of planning before you make the first cut? Tory Wright: My day job is in retail as a visual merchandiser. So whenever a light box Duratrans or a fragrance poster was slated for the trash shoot, I would roll it up, tuck it under my arm, and take it on home to my studio instead. These posters and Duratrans prints were large versions of the magazine adds I had been altering before I had this job. The funny thing is the scale shifted to a larger format while the detail of the cuts became more intricate. I just dive in and start making cuts free hand with a standard X-Acto® blade. I usually start at a point of interest like the eyes of the model.OPP: I’m interested in the recurring shape of the loop. What does the shape mean to you and how did it emerge in your work?TW: The shapes in my work are based on the body. When I made paintings I would look at high fashion magazines and then translate those forms (the models themselves and the cuts of the clothing) into flat, biomorphic forms that had a distance from the source. In graduate school at MICA I had a shift in the relationship between the source material and the final work. Why not cut my forms and patterns directly into the source material? It was about surface beauty and alienation, so why not change the surface of the source material itself? The most obvious step is often  the hardest one to make. 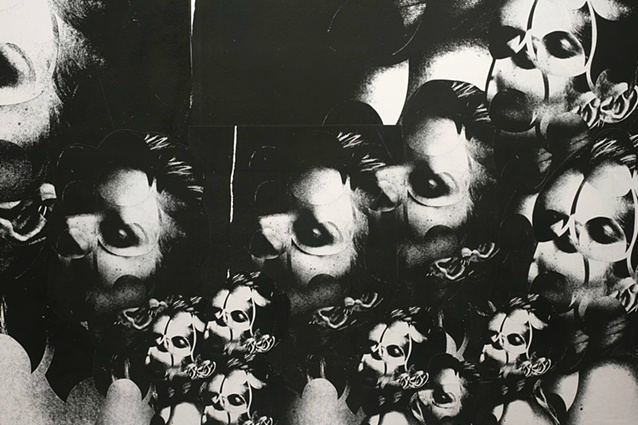 OPP: Crimson and Clover (2011) seems to represent a shift in your practice from delicate and intimate gallery pieces to larger public art works. The piece is both a billboard and has an interior life in a gallery space. Can you tell me about how it was developed?TW: Good Citizen in St. Louis is a great space. They have a billboard on top of the gallery and have programmed the use of it as well as the gallery space. I was so excited to have a solo show there. On top of that, to be able to have a billboard for two months was beyond what I could have hoped for. The billboard was where I started the work for the show. So in a way I worked from the roof down. The work is about transformation of a single image and a single face (Kate Moss). As I continued to work with the transformative qualities of this cut and copy methodology, I was able to see the possibility of where this new work could go. 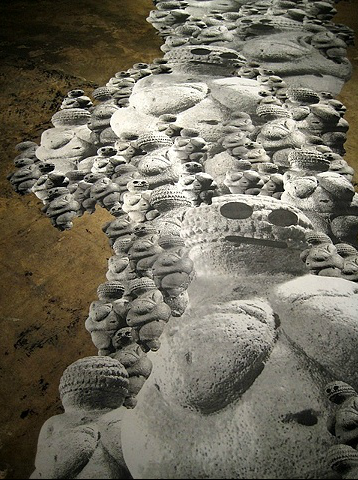 OPP: Untitled Floor Piece (2010), an abstracted collage using repeating imagery of the Venus of Willendorf  is distinct from most of your work. Its source material is from Art History instead of advertising, and it uses a process of accumulation instead of a process of deletion, as most of your cut pieces do. Can you talk about these differences?TW: Untitled Floor Piece-Venus was the second cut, copy, and accumulate piece that I was able to do in a gallery. The first was at The Front in New Orleans in 2010. For this project at Lump gallery in NC, I was encourage to take advantage of the freedom of treating the space as an extension of the studio. Being able to glue the work to the floor opened up new avenues that wouldn't have been possible in a more formalized gallery setting. There was both humor and social commentary in drawing a face on the art historical Venus and then setting up the installation for interaction with the audience. Well, the interaction was more like watching people stand on top of the cluster of Venuses regardless of how many people were at the show. It was definitely a good time with a healthy sense of humor about some important topics. OPP: What kind of important topics?TW: The use of the Venus was my way of working through the position of feminism in my work. Giving her a sort of blank face seemed to sum up a internal commentary I have with a feminist history. I wrestle with where I might fit in. I just took my thinking out of my studio and into the gallery, thanks to Lump Gallery and the encouragement of Bill Thelen. The majority of my work is I engaged with the altering of the female form. I edit images constructed by fashion photography into a new form of beauty: just as alluring, but now more powerful with the absence of the cliche. 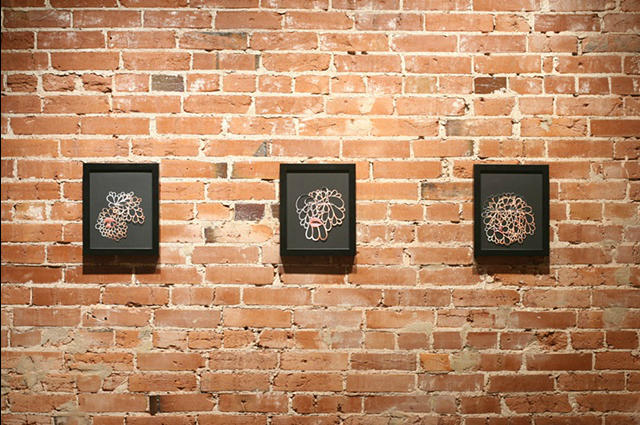 OPP: What’s changed in the way you work over time? TW: The work I make has gotten more labor intensive as I have challenged myself on how much information from the original image could be striped away without losing the sensuality of the original image. However, now the cut and copy work is about the  accumulation of all those choices made in my past work. Now I just need another opportunity to push the installation of the work into a total environment. OPP: What project are you most excited about right now?TW:  I am really into a collaborative project I have with Lydia Moyer. Hateful is a zine and blog were we challenge each other by juxtaposing our separate aesthetics with images from artists we invite to participate. It has been a great avenue for approaching my work in new ways and pushing what I think my work is or should be. 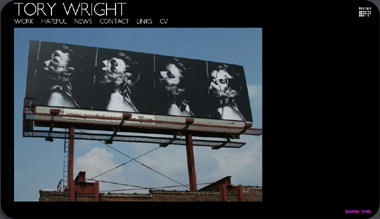