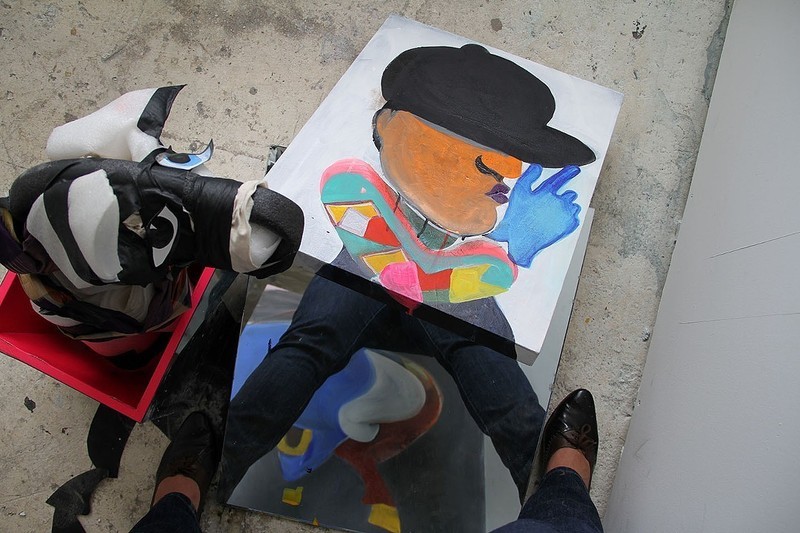 Interdisciplinary artist SELINA TREPP creates illusions of physical and conceptual space, conflating a variety of distinct artistic disciplines. She makes videos of herself painting her own portrait on a two-way mirror and creates immersive environments in which life-sized projections interact with tangible objects and sound. Most recently, she's been creating photographs of constructions in her studio which include paintings, her body, mirrors and sculpture. Ultimately, she expertly synthesizes each of these disciplines, highlighting the natural and imagined boundaries between them. Selina earned her BFA from the School of the Art Institute of Chicago in 1998 and her MFA from the University of Illinois, Chicago in 2007. She has exhibited extensively in Chicago and Zurich,  Switzerland, including shows at Glass Curtain Gallery (2014), The Franklin (2014), the Museum of Contemporary Art (2013), the DePaul Museum of Art (2012), message salon (2012) and Christinger de Mayo (2010).  In 2014, she mounted two solo exhibitions—Val Verità at Document Gallery and Waiting for the Train at Comfort Station—in Chicago, where she lives and works.

OtherPeoplesPixels: Surface, reflection and transparency are all present in your work in a variety of concrete ways. Could you talk about your recurring use of mirrors, see-through surfaces and video projection? Do you view these materials and media as symbolic?

Selina Trepp: In my work these materials and media are not intended to be symbolic. I use them for what they do, not what they imply. Mirrors, in particular, have always been present in my work. I am intrigued by their ability to create simple magic, analogue trickery, and I am challenged by the heavy-handed symbolism that comes with the use of a mirror. Mirrors let me manipulate space, multiply objects, combine images, insert myself and move light and projection.

Video projection similarly can be used to create an illusionistic space or scenario affecting an actual space. Working with projection is as much about the space I am projecting into and onto, as it is about the video that is being projected.

No one is an Island
2007
Mixed media installation
Variable dimensions

OPP: Can you offer an example from your work with projection and talk about how the space it was displayed in was affected?

ST: In No one is an Island (2007), the relationship between projection and space is most obvious. For this piece, four simultaneous projections activate the installation space. The gallery itself becomes the location of the action. The projections inject narrative performance and a sense of passing of time into the space.

Rather than projecting a cinematic landscape rectangle, my projections are matted and upended. They have an amorphous outline and soft edges; they blend with the surface they are projected onto. My goal for this work is for the projections to function as actors in the space, rather than as short films that are projected onto a screen.

Marvin and Ruby, an adult and a child who are completing each other’s reality in this piece, were filmed on a black background. They appear to float, hovering in space, like ghosts. On the floor sits a sculpture made of large pieces of mirror stacked and angled precariously on top of one another. Two projections bounce off the mirrored surfaces of the sculpture onto the architecture, covering the space with abstract shapes slowly fading from cold white to warm white to black. 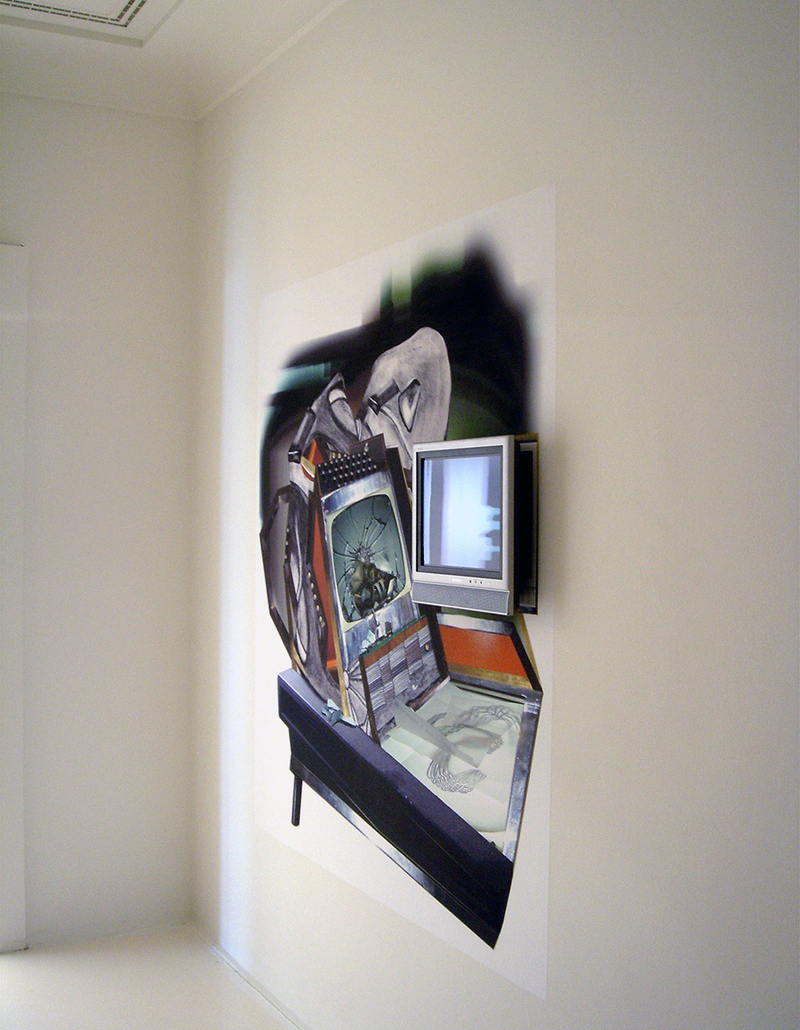 OPP: I'm particularly interested in Sherlokitty Surveillance Systems 2003 (2003), Space Oddity (2005) and The Baron in the Trees (2006). These pieces mix life-sized vinyl stickers of various screens with actual screens. Because I'm viewing it online and not in person, there is extreme spatial confusion and an added layer of screen-ness. It's hard to tell what is two-dimensional and what is three-dimensional. I assume that it was less disorienting when you first showed these pieces because the moving video revealed the real screen. As a viewer, did I lose or gain something by only seeing the virtual documentation?

ST: You lost a lot by not being able to experience that work in space. This body of work is disorienting in real life, but in a different way than in the documentation. The works have a distinct trompe-l’oeil effect. Initially they seem to have mass; they look “real.”As you move in closer, they flatten out and focus. 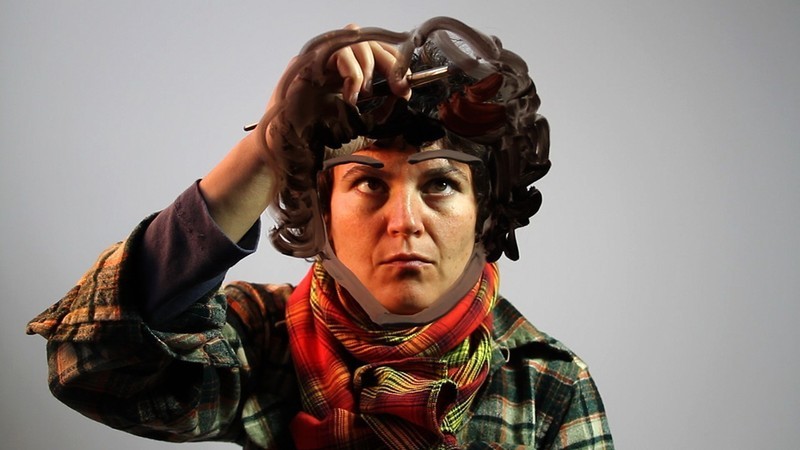 OPP: Could you talk about flattening space and condensing time in Thinking About Inheritance?

ST: Thinking About Inheritance consists of a series of 12-minute videos and video stills, in which I trace and paint over my reflection on a two-way mirror. The camera is placed on one side of the mirror, recording the process, while I sit on the other side, painting over my reflection directly onto the mirror. The painted portrait obfuscates the photographic portrait over time. I paint myself away.

Looking at my history as an artist, I noticed that I had consistently avoided painting. Actually it was completely out of the question for me to paint; the form itself felt conservative and affirming of an antiquated understanding of what art is and should do. And a more profound reason I didn’t want to paint was because my mother and grandmother are/were both painters. The space of painting was taken by them, and for a long time it was important for me to work within my own territory.

Given my history, deciding to paint was a transgressive move for me. The issue of time is located in that part of the piece: in examining the progression of means of representation historically and personally through my own progression as an artist and as human. On a more pragmatic level, time is actually not condensed at all. The videos are shown in real time with no edits. They show me painting for as long as it takes to complete the painting.

The flattening of space in the videos as well as in the stills functions on multiple levels. Primarily the space of the photographic image and of the painted image become one through the analogue device of painting onto the mirror and the digital device of capturing this action with a camera. The surface of the mirror, where I paint, is what the camera focuses on. That image is captured by the lens of the camera. It’s a flat surface. There is not much depth of field, or else I can’t focus the lens. On another level I am reversing the historical progression of portraiture, in this case going from photography to painting, from objective to subjective. 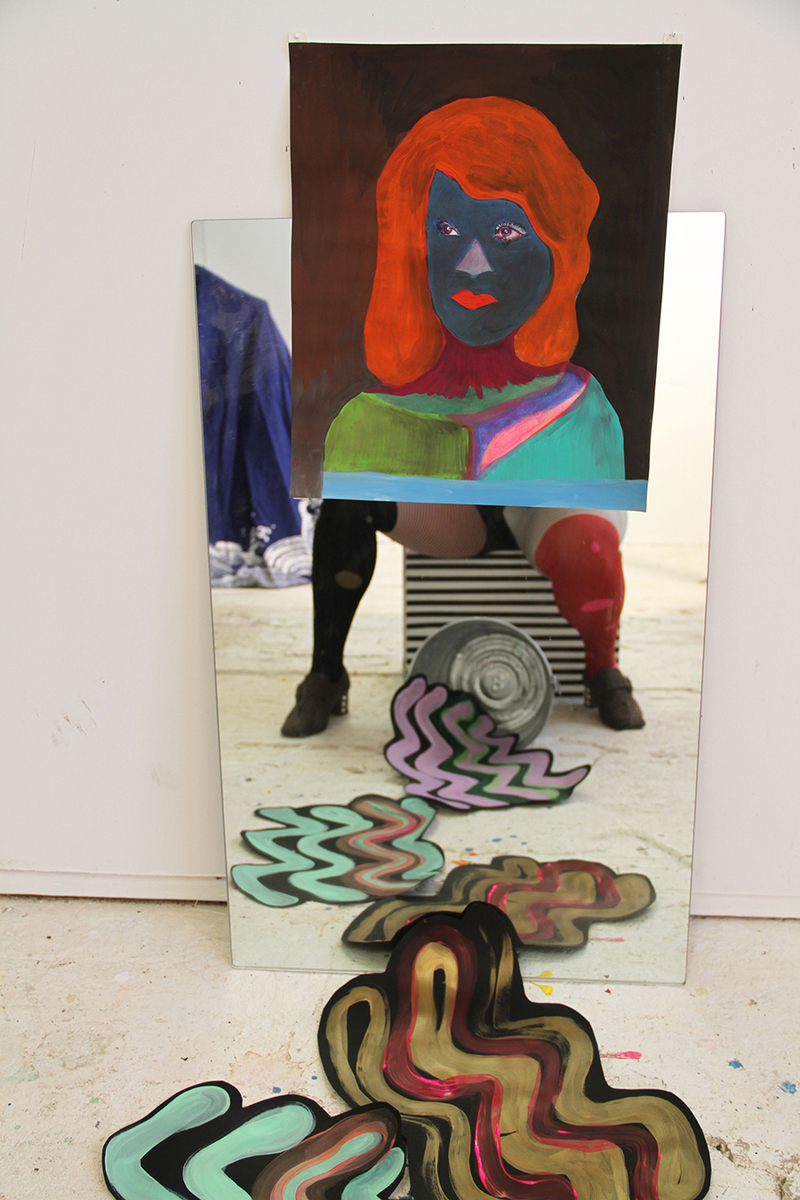 OPP: The figure has often been present in your work, but usually in performance and video, as in No One is an Island (2007), When I hear Thunder, I take a Bow (2008) and Appear to Disappear (2009). Your newer work feels distinctly lo-fi—although conceptually more sophisticated—when compared to your early work with projection. Could you talk about your turn to figurative painting and its unconventional intersection with video, photography and sculpture?

ST: My earlier work took place outside the studio and was often collaborative and social. In 2010 I decided to invert that mode of working and went from having a social-post-studio-practice to having an anti-social-studio-practice. Now working alone within the confines of my studio, I use all I have at my disposal in that space to make art. Economy (gestural and literal) and improvisation guide my process.

While I use painting, installation, performance and sculpture to create my images, it is the camera that allows me to pull those dimensions together. I use that mix of media because I like to do all those things. It makes making enjoyable.

OPP: In October of 2012, you made a decision "that instead of buying any more materials for art making, [you] would only work with the material [you] already have in [your] studio." Was this decision practical, ethical or conceptual? Are you still working under that restriction?

ST: I am still working under that restriction, although strictly speaking, it’s not true. The final product is a photographic print, usually mounted and framed, a new object, which I store in my studio. The decision was both conceptual and political, and the practical, economic and ethical implications of non-consumption are all part of it. 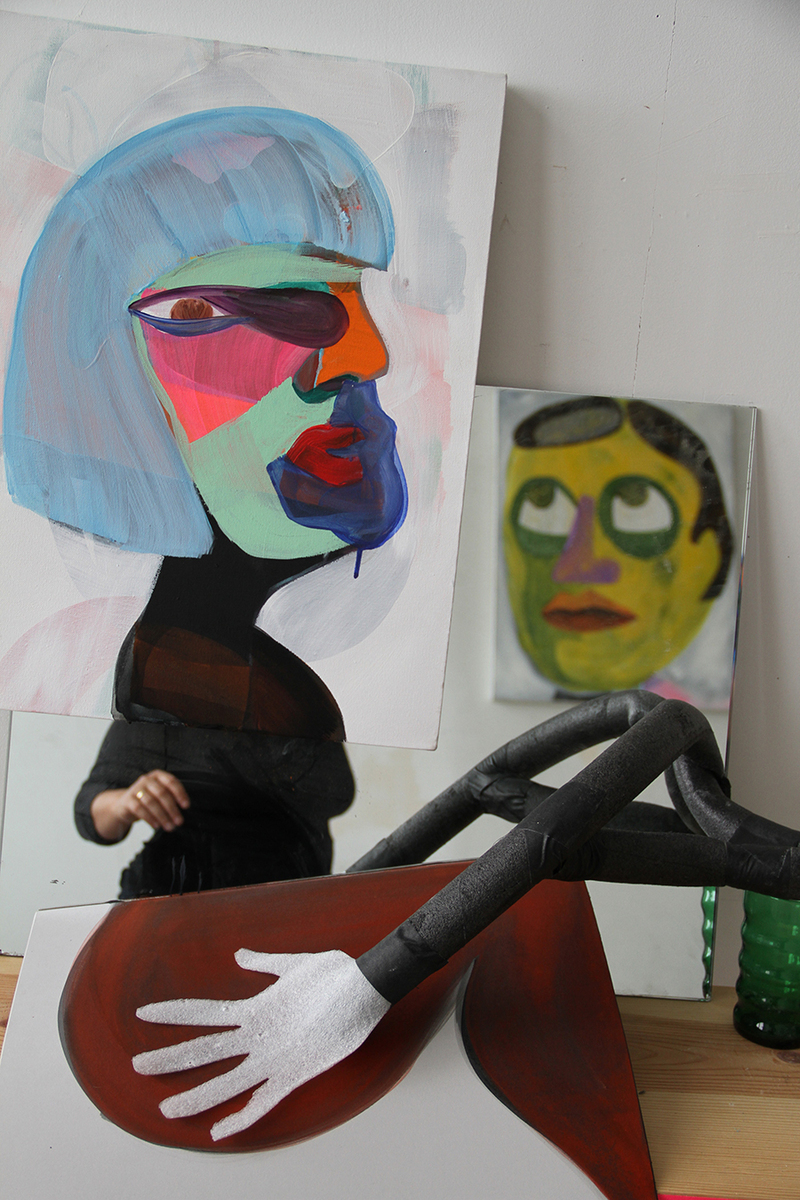 ST: The biggest surprise is how fruitful and fun it is for me to work under this constraint. My studio time is playful and engaged. I am intimately aware of the materials I have and adept at seeing all the potential ways to use and reuse them. As materials and colors run out my work changes. Things are in flux, always.

Since materials are finite, I overpaint a painting once it has played its part in a photo. The same goes for the sculptural elements: they are taken apart and reused as needed. The act of investing effort into making things and then letting go of them in itself has become a valuable part of my work and my general outlook.

So far nothing has been frustrating. When it gets frustrating, I will stop this project and go buy materials. 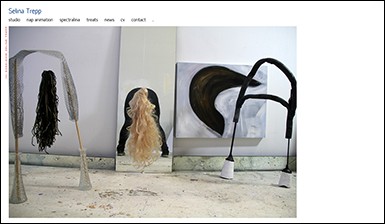