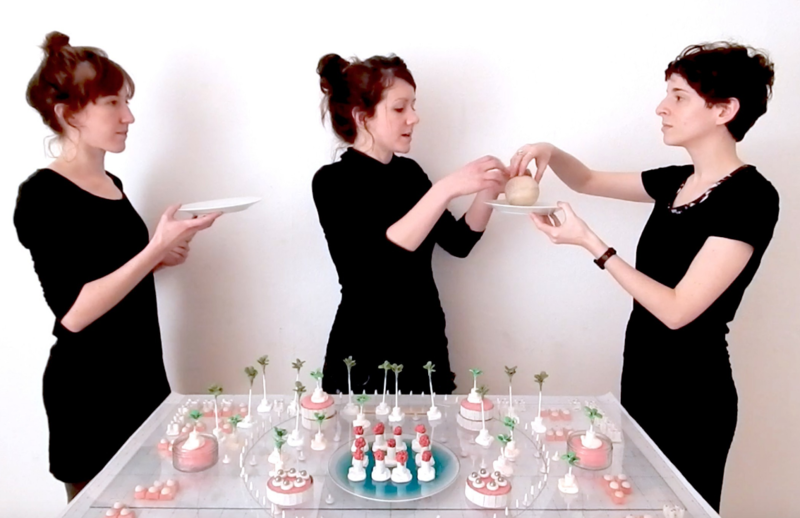 SARAH K. WILLIAMS' background is in painting and sculpture, but "perfectly still objects make [her] restless." She creates scores for sculptural performances, both performing herself and directing others. These hard-to-classify works linger in between theater, performance art and sculpture. Sarah earned her BA in Fine Arts / Art History at The College of William and Mary and her MFA in Fiber and Material Studies at The School of the Art Institute of Chicago. She was a 2017 Fulbright Fellow at Universität der Künste, Institute for New Music in Berlin. She is the founder of the Sprechgesang Institute, a "research-based platform for artists working in an in-between language of two or more disciplines." She is a 2019 Target Margin Theater Institute Fellow and has been an Artist-in-Residence at Vermont studio Center, Studios at MASS MoCA, Theater Magdeburg and Oxbow. Sarah lives and works in Brooklyn, New York.

OtherPeoplesPixels: As you say in your artists statement, you “made still objects once: out of clay and plaster, wire and wood.” Let’s talk about those sculptures first. Works like Sugar Temple (2013), Act I, Scene I (2015) and Over Saturated (2015) have a sense of action in them even though they are static. It’s not they that seem like they would move, but rather that they are sites where some human ritual might be performed. How do you think about ritual, in the world and in your practice?

Sarah K. Williams: Yes, ritual is an interesting word and not one I often use with my current work, but I can certainly see the relationship with the works you’ve mentioned. I gravitate towards symmetry, repetition, precision, memorized gestures—which I guess are all present within ritualistic activity. But ritual connotes a sense of spirituality, which I have trouble relating to. Certainly I was thinking of sites for human activity—that the piece could potentially be moved or interacted with, though I hadn’t given myself permission to work that way yet. A bit related maybe, “otherworldly” was a word that was tossed around a lot with these works, which bothered me. I’ve become much more interested in the mundane, and finding absurdity within banal activities. 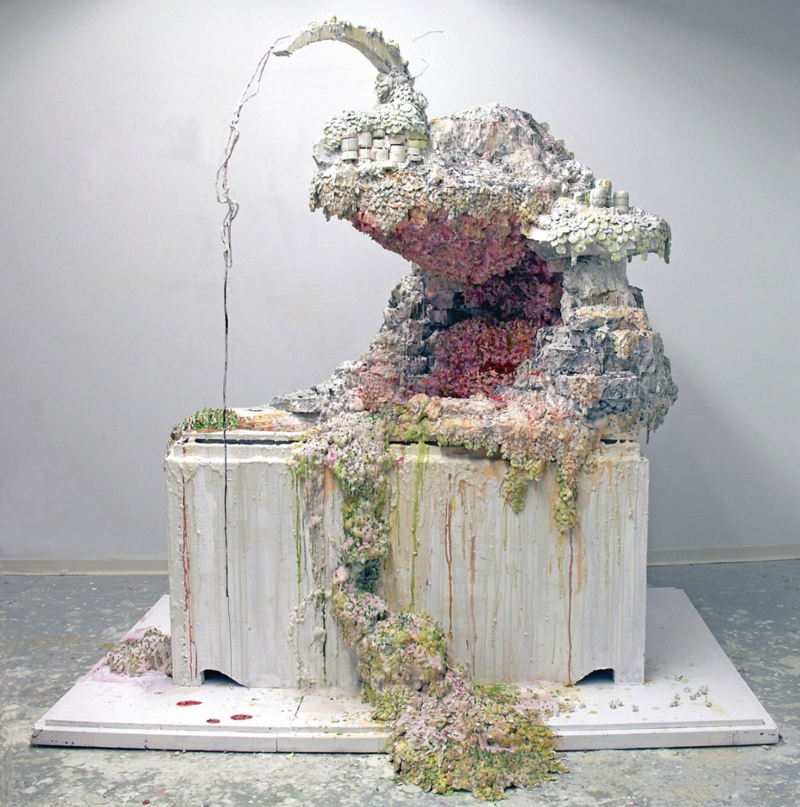 OPP: It sounds like stillness of those sculptures was a problem?

SKW: Those pieces are on the cusp of movement. I was feeling very restless with their stillness, even though, as you mention, there is a suggestion of activity. I think we sometimes restrict ourselves too much with titles, too aware of our chosen medium or discipline. At the time, I was too aware of being a Sculptor and frustrated that sculptors make things which sit in space and should be walked around and looked at. Obviously this isn’t helpful, and it meant I was irritated the minute I walked into the studio with all these unmoving things. There was a huge disconnect because my main source of inspiration was music and theater, yet I was trying to squish it into a very small box, under the umbrella of sculpture. 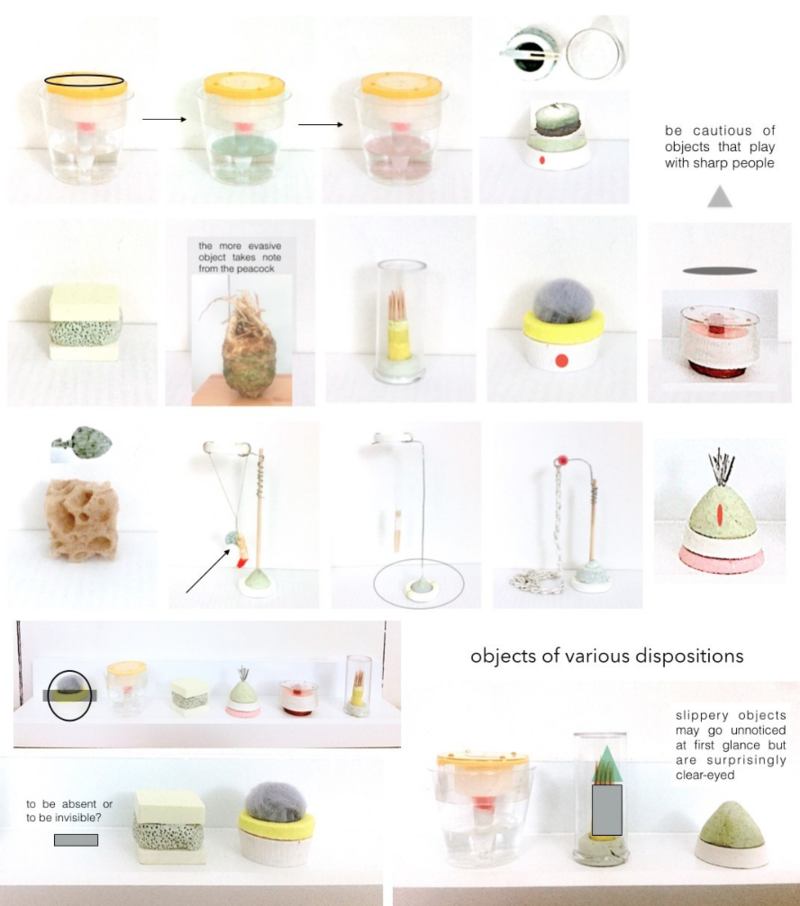 Sample Objects (and their potential movements), 2018

OPP: What is a “sculptural performance?” Is this a term you coined or are you part of a lineage of other artists?

SKW: I started using the term ‘sculptural performance’ only because it seemed like the most logical and straight-forward way to describe my work. I would describe it as performative work involving a set of invented objects within a specific aesthetic framework. Within this work, I’ve started referring to my sculptures as objects. To me, an object has a functionality to it which a sculpture doesn’t have. I want these objects to exist with a purpose, to be assigned specific characteristics and abilities.

I wasn’t so aware of this combination of composed sound and movement with strong visual elements until spending time in Berlin. The work which I found the strongest connection to there was in the genre of Musiktheater. I didn’t even know this was a genre! Very different from what we know as Musical Theater in the U.S., these pieces weren’t compelled to follow a narrative, were often very short, experimental, abstract, absurd. To generalize, most pieces seemed to enter a visual world through music composition, while I was the other way around. Exposure to artists like Heiner Goebbles, Dieter Schnebel, and Mauricio Kagel made a huge impression on me.

Absorbent Objects: for one performer and 3 objects, 2017.

OPP: You often use the language of music and theater to talk about interacting with the objects you make. There’s the Orchestra of Obsessions and Dissatisfactions (2018) and The Found Sound Research Orchestra (2017). You also create “scores” for objects. Many performances are divided into Acts. Can you talk about this merging of the performing arts with the visual arts? Does this hybridity change the venues where you share your work?

SKW: When I first moved to NYC after grad school, I was completely uninterested in looking at sculpture or painting. I knew I should be going to galleries, openings, things we’re told are necessary as emerging artists, but all I wanted to do was go to the opera. I never had a relationship with opera until my last semester in grad school when I heard Wozzek for the first time and became completely obsessed. I basically spend two solid years learning everything I could about opera. I started working for a couple of small opera companies in NY, and spent hours in the performing arts library looking at scores as drawings, as recipes, as instructions for something that could be tangible.

There is so much great overlapping vocabulary with sound and visual: vocal color, textures in music, light and dark, hard and soft, etc. I started writing ‘scores’ for sculptures as accompanying documents which might describe how an object moves through the world. In Berlin, I began really leaning into this overlap, which is where the orchestra pieces came from. I became interested in borrowing structural frameworks from other disciplines, approaching them with my own skill sets. How can I work within the conventions of classical music, but through the lens of what I know: material, process, color, form? As I’ve been working this way, I have become less interested in traditional gallery spaces, and more attracted to hybrid spaces, collaborative venues, non-art spaces, offices perhaps. . .

OPP: Can you talk about the difference between performing your own work and being a director?

SKW: I’m much more interested in directing/conducting/writing than performing. I only end up performing by default, and it’s not a comfortable role for me. However, I have to learn about a piece by doing it myself, and then sometimes it’s easier just to execute it without needing to articulate it to someone else. When I do have the opportunity to work with “performers.” I put this is quotes, because I typically work with artists who have a relationship to the types of activities the piece focuses on rather than someone with a performance background and preconceptions about what it means to perform. I often make a track with audio commands as a sort of script. Practically, this is useful because the actions don’t have to be memorized, but I’ve also been playing around with letting the audio track become a more present component to the pieces. I’ve been going to a lot of plays recently which has brought up a lot of opinions about performing versus acting. As I’ve only performed with non-performers, it makes me wonder what would happen if I immersed myself more into a theater environment. 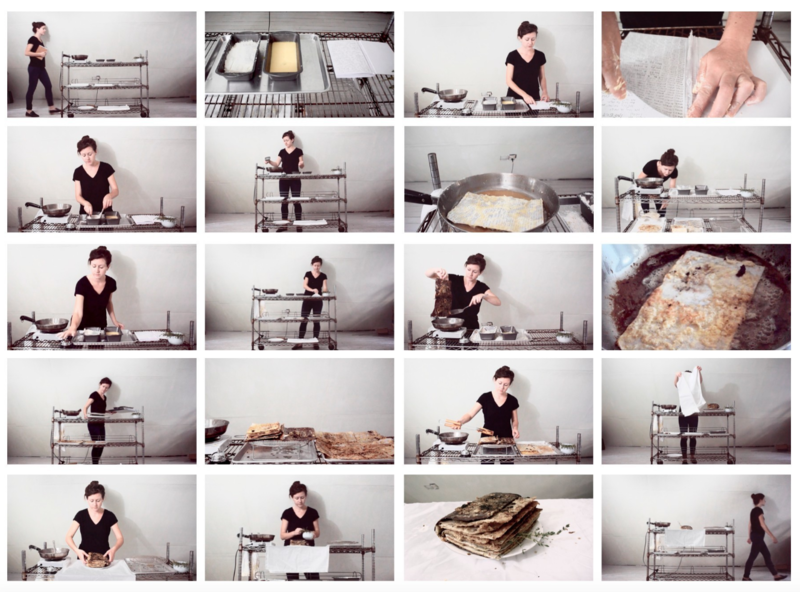 Fried Book of Conjugated Concerns with Sprig of Thyme: for one muttering performer with multiple concerns. 2017.

OPP: You are the founder and director of Sprechgesang Institute. Tell us about the formation of the Institute.

SKW: The first iteration of Sprechgesang Institute began in Berlin when I was doing a Fulbright there in 2016/17. As I mentioned, I was studying the overlap of opera and sculpture. I enrolled in an experimental music composition department. Between being surrounded almost exclusively by musicians/ composers at the university and my fellow Berlin Fulbrighters in Germany—very few of whom where artists—it became clear to me how refreshing and enormously valuable it was to be outside of a strict Fine Arts community. The foundation of S.I. is made up of people I met while in Germany, paired with people I know here in New York, and a few artists working long-distance. Currently we are a mixture of sculptors, painters, musicians, writers, composers, scientists, journalists, cooks—all interested in finding overlaps within our lines of work. We meet once a month over an elaborate dinner, mostly constructed of tiny sculptural snacks, we staple a lot of things, file things, take roll—it’s all very institutional.

SKW: Our current project is an experimental dining event. Each Artist of the Institute is making a dish—some edible, some not—to be choreographed into a 10-course progression for two performances in mid July. We’re also putting together an accompanying cookbook full of overly-complicated recipes.

OPP: Aside from Sprechgesang Institute, what’s next for you? Any new projects in the works?

SKW: I am still digesting a few projects I started while at Vermont Studio Center last month. I’m working on a series of short performances with objects under the theme Critical Response, structured a bit like a concept album. I collaborated with some artists there on a couple of these pieces and they continue to evolve. I’d like to get them to a point where they can be performed back-to-back in quick succession.

I’m also a fellow at Target Margin Theater this year, which has been a great outlet for exploring the more performative side of my practice. For this, I have an ongoing investigation of gesture and other alternative methods of communication not reliant on text or object. It’s so hard for me to ignore the visual side of things, but such a worthwhile challenge!

I also have an ongoing project called Aesthetically Complex Pies. It’s exactly what it sounds like. 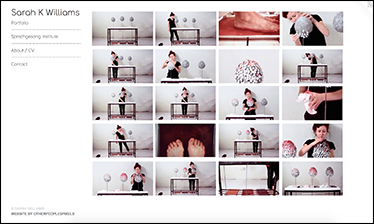 Featured Artist Interviews are conducted by Chicago-based artist  Stacia Yeapanis.  When she’s not writing for OPP, Stacia explores the relationship between repetition, desire and impermanence in cross-stitch embroideries, remix video, collage and impermanent installations.  She is an Adjunct Assistant Professor in the Department of Fiber and Material Studies at The School of the Art Institute of Chicago, where received her MFA in 2006 Stacia was a 2011-2012 Artist-in-Residence at  BOLT in Chicago.  Her solo exhibitions include shows at Siena Heights University (Michigan 2013), Heaven Gallery (Chicago 2014), the Annex Gallery at Lillstreet Art Center (Chicago 2014), The Stolbun Collection (Chicago 2017) and Indianapolis Art Center (Indianapolis 2017) and Robert F. DeCaprio Art Gallery (Palos Hills, Illinois 2018). During summer 2018, Stacia created  Renunciation Reliquary as a one-night installation for Chicago Artist Coalition's annual benefit Work in Progress and was an Artist-in-Residence at Facebook. Her solo show Practice is on view at Kent State Stark through May 4, 2019.