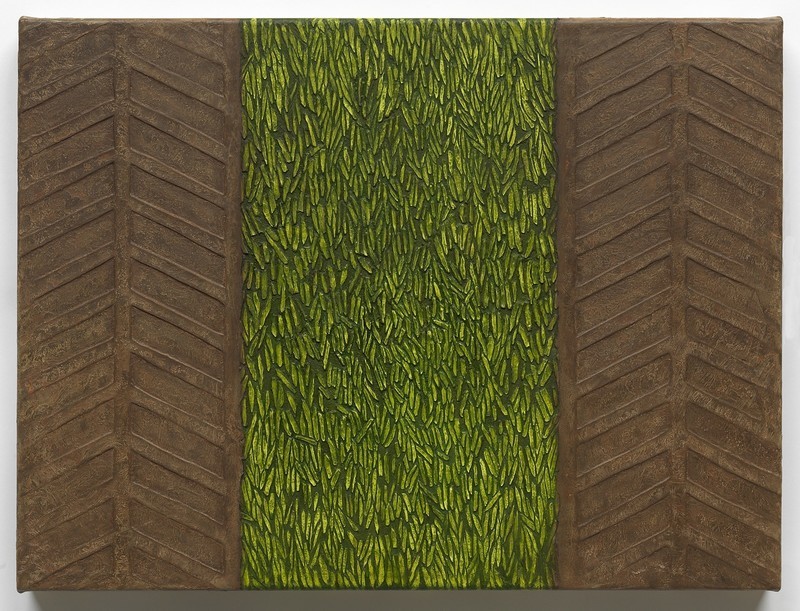 RYAN B. RICHEY paints humorously poignant vignettes that exude a humble awe of the everyday. His signature close-cropped compositions suggest an intimate point of view, one so close, in fact, that we can't always recognize what's in front of us. Ryan received a BFA and MFA from the School of the Art Institute of Chicago. He has published written work in online literary journals including independent presses Beard of Bees and Spork. Selected solo exhibitions include Everyday Romances (2016) at Illinois Wesleyan University, Ghostbuster (2015) at Loyola University, and Gathering Smoke (2010) at the now-defunct Rowley Kennerk Gallery. His work has also been featured in numerous group exhibitions, including the recent Chicago and Vicinity at Shane Campbell Gallery. Ryan’s work will be included in an upcoming group show—also features the work of Mel Cook, Em Kettner, Celeste Rapone, Allison Reimus—at Roots & Culture in Chicago. Close to Me opens on January 27, 2017. Ryan lives and works in San Francisco.

OtherPeoplesPixels: What’s the underlying thread that ties all your paintings together, whether style, content or process?

Ryan B. Richey: The paintings I make come from a combination of stories from my past and daily ruminations. A while ago, I started writing down everything I could remember throughout my life and what my relatives told me about their lives. I continually add to these writings as the present becomes past, and experiences begin to take shape. The writings serve as a reference when I begin imagining a new painting. I often think about how I internalize the world around me. I consume individual and collective experiences, personal outlooks and political views everyday. I think about how they relate to the past, future and to everyone on a micro and macro level. Every painting I create is tied to this narrative. 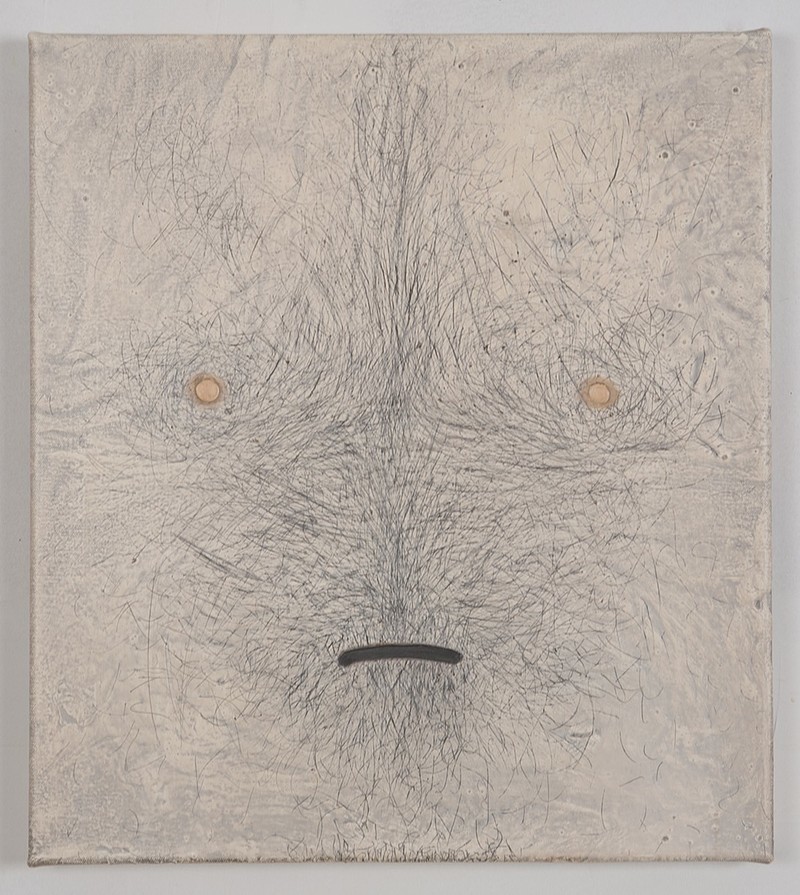 OPP: Your titles ground your imagery by adding an emotional tone, which I would describe as humorously poignant. Is that an accurate description of the tone you want to evoke? Could you talk generally about pairing language with image for effect? Have your strategies for titling changed at all over the years?

RBR: I really like those two words to describe my work, “humorously poignant.” The word and image pairings usually begin with the text. I go through a struggle between the image and words, oscillating between the too obvious or not obvious enough, too cheesy or sentimental. I relish in the challenge of taking on overdone ideas and making them my own.  The crux of the challenge is to have all of life captured. Things are funny and sad and weird, funny, beautiful, ugly and unknown. My goal is to uncover the vulnerability of living, and for me it’s also punctuated by a desperateness to belong. I want to communicate a universal truth to everybody, and be someone everybody can relate to. My paintings, narratives, and titles, are an extension of this yearning.

The titles of my paintings have evolved. My older works had titles that included most of the text from which they came. Through the years, the titles have been consolidated to a sentence, a few words or only one. 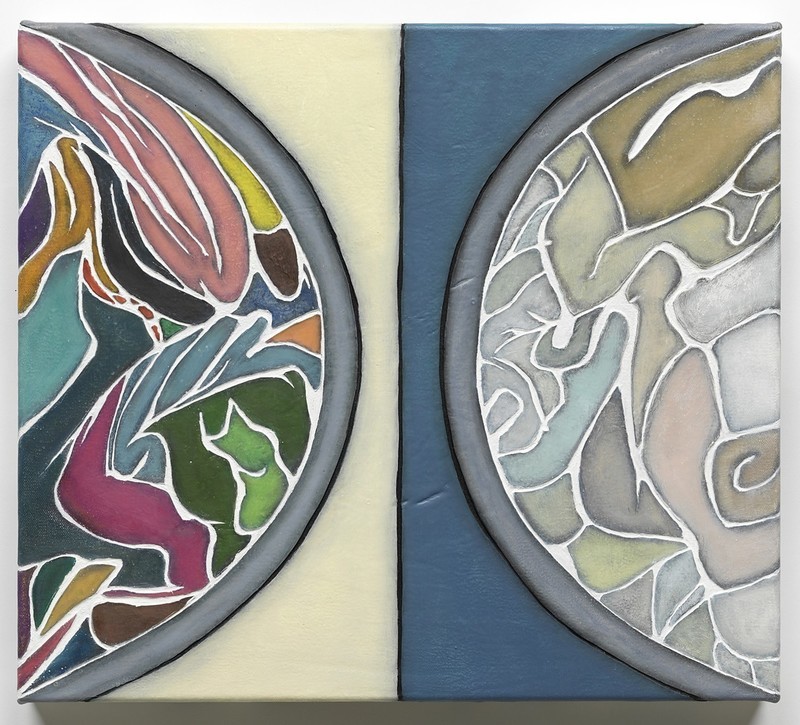 OPP: Can you talk about your use of the zoomed-in and cropped perspective in paintings like Misfit, Ether Arms, Laundry Day and Sad Song?

RBR: I like to have just enough visual information and text for the viewer to be able to figure it out. Zooming-in and cropping are a few of the tools I use to focus on my subjects. I also employ the perspective from how the viewer would see the image, which also determines the painting’s size. My paintings are intimate experiences for the viewer. There may be a vast sky, but the you can only see so much of it at one time. Most of what I focus on are small moments in life, like the sandwich you are bringing up to your mouth or a glimpse at the hand of a loved one. 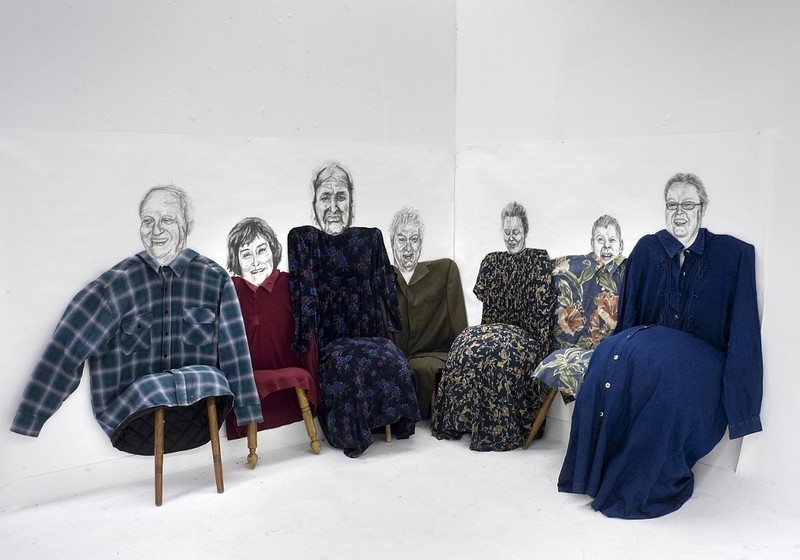 OPP: Back in grad school, you were working with fabric and charcoal to make portraits. I’m looking at works like L Couch, LOVE and Elvince, all from 2008. Now it appears you work exclusively in painting. Have you turned away from sculpture?

RBR: I don’t feel that I’ve turned away from sculpture altogether. I base my art medium on what makes the most sense in terms of delivering the message, understanding the context and working with the physical space of the show. Most recently my paintings have sculptural elements: underneath the oil paint is a surface of carved gesso, and carefully added textural elements.

Most recently I have been working on a project that represents spending time with family. I have been making little pillows out of relative's clothes that I would like to like to display where the wall meets the floor all along a space. In 2014 I collaborated with the members of ADDS DONNA for Sunday Afternoons, a show that took place at SWDZ Gallery in Vienna, Austria. I drew each of the ADDS DONNA member’s facial portraits to pair with a piece of their clothing which created a three-dimensional portrait of each of the members.

Pay No Attention to the Man Behind the Curtain was a show hosted at Pilsen Village in Thrift in 2010 that included Pea in My Bed, a piece I created in reference to the popular fairy tale The Princess and the Pea. The small pea disrupting the massively large, stacked mattresses is an analogy we can all relate to. 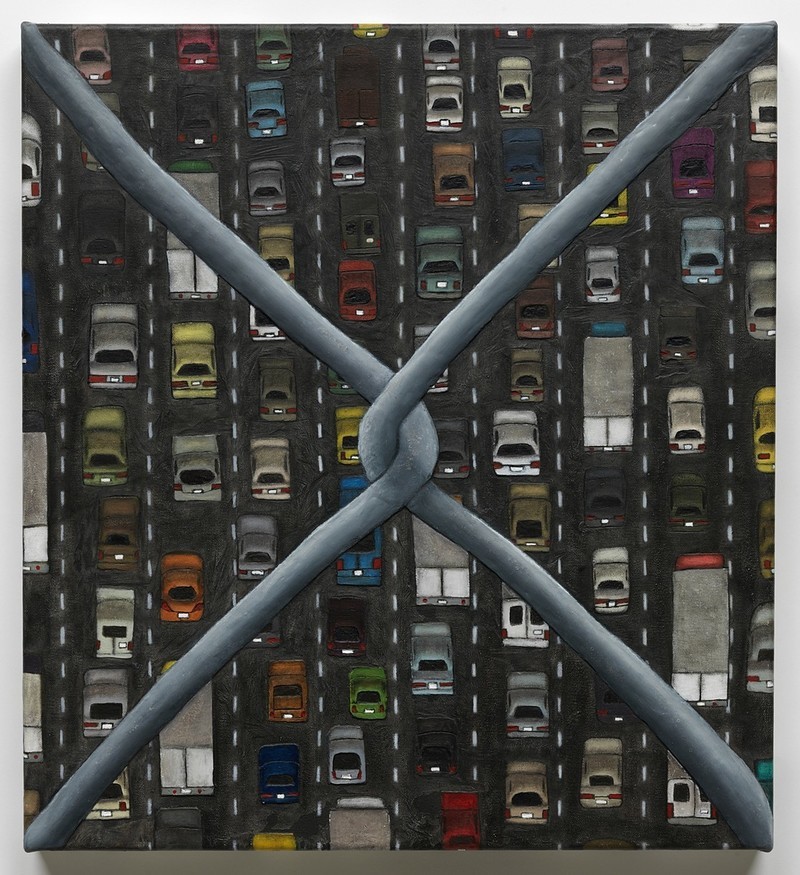 OPP: You were a Chicago-based artist for quite a long time and most of your exhibitions are there. But now you live in San Francisco. How has it been adjusting to a new art scene? What’s different in San Francisco?

RBR: This process of moving has inspired a number of new paintings too. Of course the weather is consistently pleasant, which leads to good painting conditions. But I miss being physically close to the Chicago art community. Before I left I helped with getting ADDS DONNA into their new space. It was a labor of love. Everyone, please support galleries like ADDS DONNA. They are vital to the art scene in Chicago.

I haven't been in the Bay Area that long, however, I have found some spaces that feel like home, Chicago. Kirk Stoller runs a space out of his dwelling, c2c project space, that connects artists from the coasts. Takeshi Moro has a gallery in his house, tmoro projects, which reminds me of The Franklin, Terrain, and The Suburban. He cooks the best food for his openings too! There is also Minnesota Street Projects that has a Mana Contemporary vibe. Jessica Silverman Gallery is my favorite blue chip space. There is a lot going on in Oakland. I like the Land and Sea gallery there. 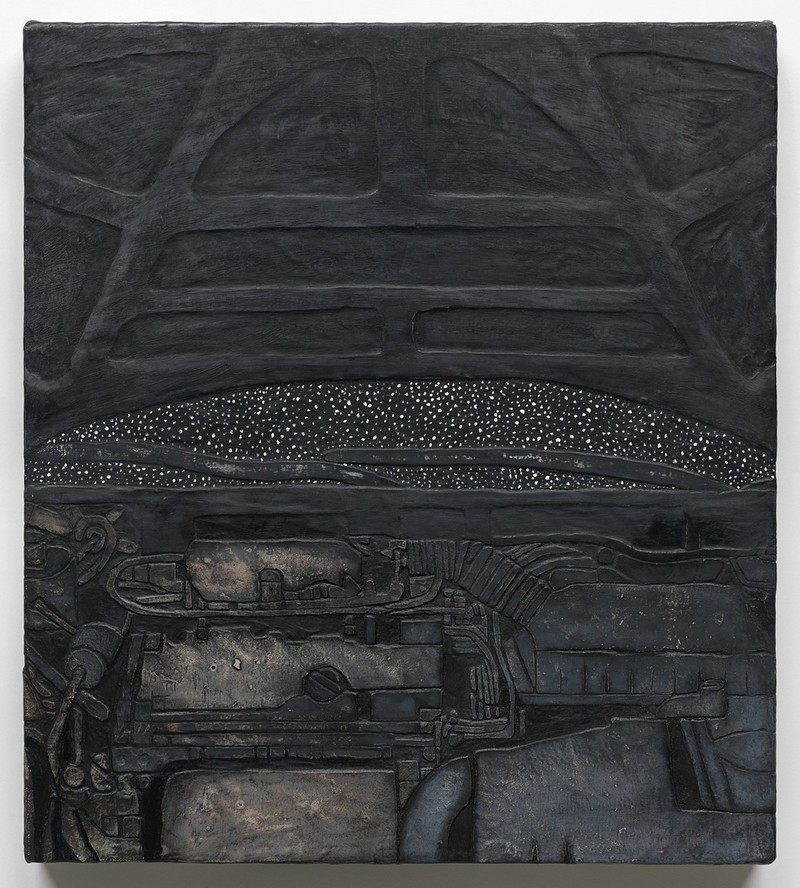 OPP: Do you have a favorite painting that doesn’t get enough props in your opinion? Will you tell us the background story?

RBR: A painting that I really enjoy is Laundry Day. It sprang from the years I spent doing our laundry at Yo-Yo Coin Laundrymat in Chicago. This painting was about relationships to me. It highlights how two people can be mixed in each other’s lives and sharing the same experience. It also brings to surface the cycles we go through, as well as the routines.

A painting that has sentimental value to me is Used Cars. All of my cars have been used cars. As a teen I was driving home one night from my job as a dishwasher at Ponderosa Restaurant when my car broke down out in the country. The hood was up and the stars were reflecting in the windshield. It was sad, but beautiful. My mom came and towed me home using a quilt we connected to both cars, which became another painting. 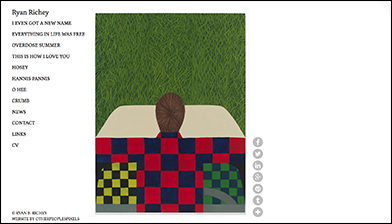 To see more of Ryan's work, please visit ryanrichey.com.
Featured Artist Interviews are conducted by Chicago-based artist Stacia Yeapanis. When she’s not writing for OPP, Stacia explores the relationship between repetition, desire and impermanence in cross-stitch embroideries, remix video, collage and impermanent installations. She is an Adjunct Assistant Professor in the Department of Fiber and Material Studies at The School of the Art Institute of Chicago, where received her MFA in 2006, and was a 2011-2012 Artist-in-Residence at BOLT in Chicago. Her solo exhibitions include I Still Haven’t Found What I’m Looking For (2013) at Klemm Gallery, Siena Heights University (Adrian, Michigan), Everything You Need is Already Here (2014) at Heaven Gallery (Chicago) and When Things Fall Apart, in the Annex Gallery at Lillstreet Art Center (Chicago). Stacia created site-responsive installations for two-person show Form Unbound (2015) at Dominican University's O’Connor Art Gallery (River Forest, IL) and SENTIENCE (2016) at The Ukrainian Institute of Modern Art. Her work was recently included in SHOWROOM, curated by Edra Soto, at the Chicago Artists’ Coalition. Stacia is currently preparing for Resist the Urge to Press Forward, a two-person show with Brent Fogt at Riverside Art Center (Riverside, Illinois) and Sacred Secular, a solo show at Indianapolis Arts Center in Indiana.