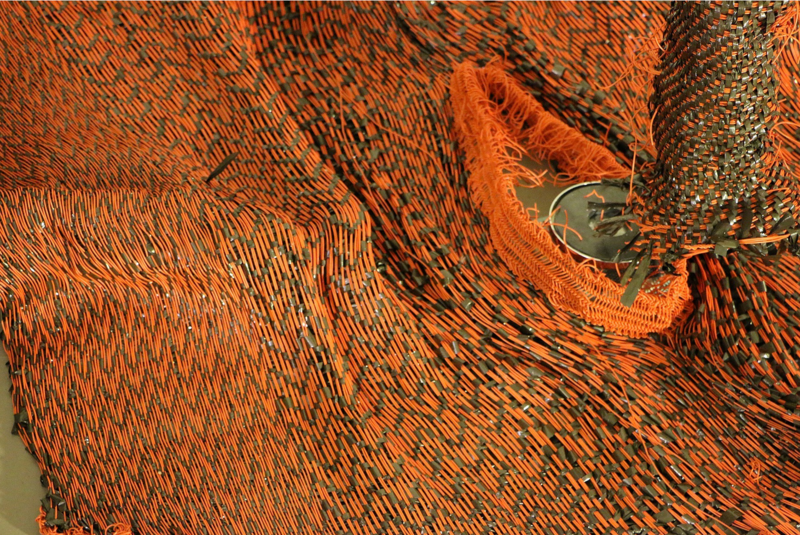 R. MERTENS investigates the rising and passing away of technology and the human relationship to obsolescence. His installations combine the materials of recent predigital technologies—VHS tape, electrical cords, old TVs and computers—with the much older technologies of weaving and crochet, evoking monuments, shrines and ritual sites. Rob earned his BFA in Sound Art from The School of the Art Institute of Chicago and his MFA in Fiber Art from The University of Oregon. In 2016, his work was included in the group exhibitions CARPA at the Museum of Contemporary Craft (Portland, Oregon), Extreme Fibers at the Dennos Museum Center (Traverse City, Michigan) and New Waves at the Museum of Contemporary Art (Virginia Beach, Virginia). His exhibition Paradoxical Acousmetres opened as part of Spring Solos 2016 at Arlington Arts Center in Virginia. Rob is currently an Assistant Professor at James Madison University in Harrisonburg, Virginia, where he lives.

OtherPeoplesPixels: What are the conceptual connections between the pre-digital technologies you use as materials and the fiber techniques of weaving and crochet?

R. Mertens: My initial interest in fibers came from my experience in Sound Art actually. In Chicago I worked as an intern for the Experimental Sound Studio during a period of transition for the studio. They were moving to a custom facility and I helped move equipment. Along with this I was backing up old cassette tapes to computer hard drives, this was in 2006, and home pc recording was really about to take off. ESS has an amazing collection of audio called the Creative Audio Archive which includes home recordings of Sun Ra, anyway it was this time period in which I was starting to think about how technology changes and how fibers/spun-string is often considered one of the earliest forms of technology. Thus, I’m interested in the evolution and progression of technology and record keeping. 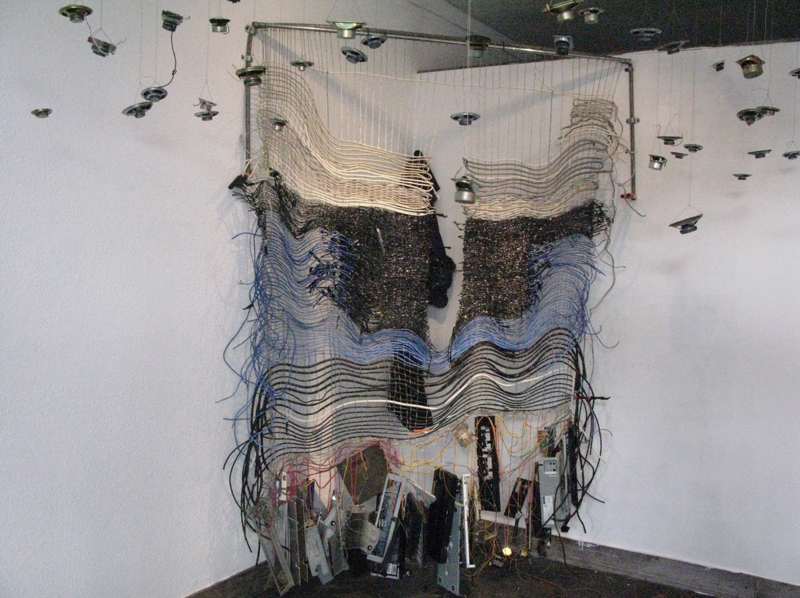 OPP: It’s pretty common nowadays to think of all of our online, digital activities as being in opposition to our pre-digital lives. It often gets casually referred to as a distinct break, i.e. before and after the World Wide Web, but there are a lot of early technological precursors, as you acknowledge. Can you say more about the evolution and progression of technology?

RM: Part of my interest in technology is the moment when society shifts away from a progression, i.e. when laser disc was abandoned and VHS became the medium of choice. Those dead ends have a parallel in the natural world; species die out and leave fractions of biodiversity behind. Specifically, I find the long-coming extinction of VHS tape, 9-track tape, and the true hold out—cassette tape—to be fascinated and connected to larger notions of loss in culture.

While I was living out on the West Coast I became interested in two distinct but similar things. I learned about The Museum of Jurassic Technology in California and about Pre-Columbian Andean Khipu. The Museum of Jurassic Technology is an experimental archive founded by David Hildebrand Wilson and Diana Drake Wilson "The museum's collection includes a mixture of artistic, scientific, ethnographic, and historic, as well as some unclassifiable exhibits" (Wikipedia). It approaches those subjects from a more flexible understanding of historicity and creativity with the understanding that narratives grow and change through time. Khipu is Quechua for "knot" and is/was a record-keeping, tied cord. It’s a system of knots used to represent language and numeric values. Both the museum and Khipu influence my work in how I think about lost or eschewed narratives found in works of art. Khipu were largely destroyed by the Spanish during invasion of South America. Roughly 600 hundred from 1500 and before still exist today, and though there has been a great deal of scholarship focused on deciphering the cords, the idea that these objects carry lost meaning is potent and meaningful in itself. This connected with the construction of "true" and "flourished" archives led me to the construction of my past work. 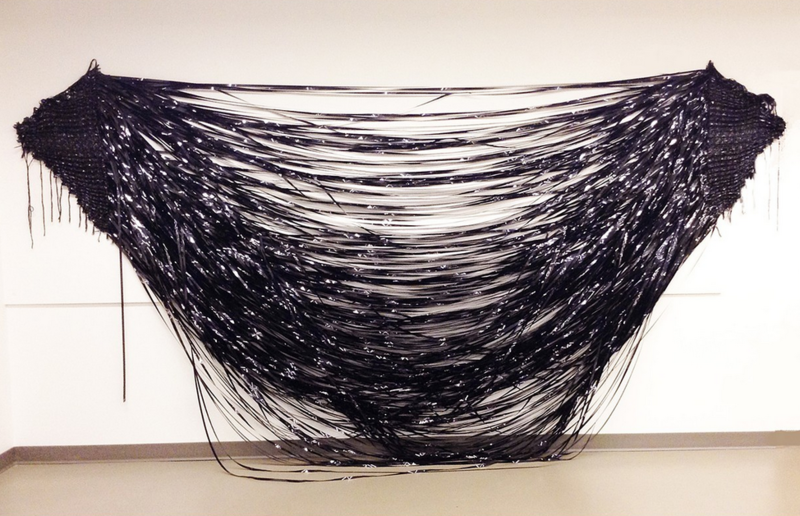 OPP: What does obsolescence mean to you and how do you employ it (or ignore it) in your work?

RM: The idea of obsolescence is at the core of much of my work. Working in Fibers, which is typically characterized as a craft medium, I am often confronted with the roll of function in my art, and the idea of obsolescence in regards to function seems very direct. What happens when things lose function or are made disregarding function? Does it expedite the process of becoming obsolete? Can new functions emerge out of obsolescence?

OPP: I’m gonna turn that one around on you because I think, in your practice, the answer is clearly yes. What new functions can emerge out of obsolescence? Both in general in our contemporary world and specifically in your practice?

RM: In my practice specifically I think the new function is related to identifying cultural belief structures and developing a visual understanding of why our contemporary culture is obsessed with Apocalyptic or Post-Apocalyptic narratives. The work is a sign post for discovering what we already know but aren't critical of, i.e. our impending endings. So the work is symbolic in function.

I see more specific functions emerging out of technological obsolescence in up-cycling, recycling, and a focus on sustainable systems. This is generally the conversation most people want to have around my work, taking broken and old things and recycling them as art. 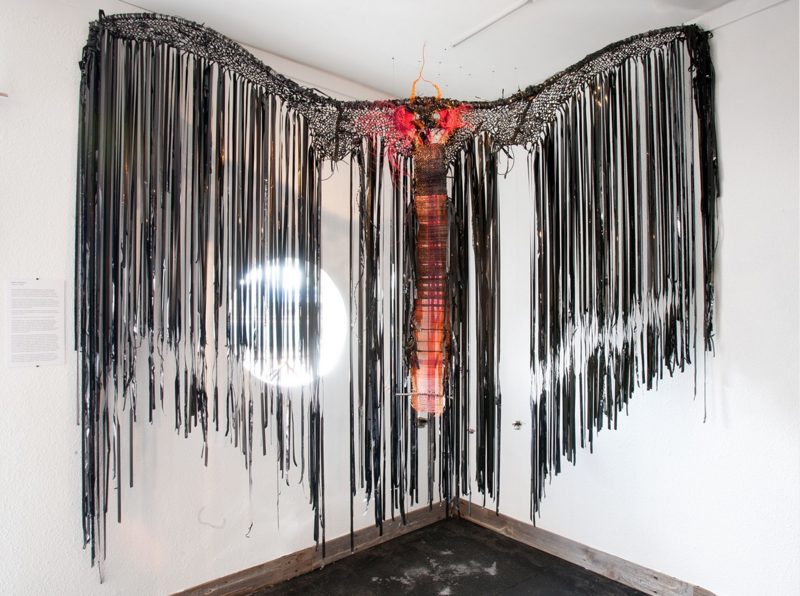 OPP: Many works reference shrines, rituals and monuments. In your project statement for More Something from Nothing (2014), you state: "The line between art and spirituality in contemporary art is an often tenuous one. Spiritual Art or art about religion is generally characterized as either polemic or naive. In other words, it is didactically critical or unabashedly uncritical. I often wonder if art and spirituality can be sincerely and critically united." Have you discovered any answers since then?

RM: I’ve read some of James Elkins’ writing on this topic and that statement is speaking directly to what you’ve said. My interest stems from a Psychology of Death class I took at SAIC taught by Tim O’Donnell. In that class we discussed the ways in which humans have coped with the idea of their demise. There are common strategies people use: believing in life after death, i.e. religion; returning to nature; living on and transcending through Art; and living to create a legacy for the next generation. This has affected the way I approach my art making.

I’m an atheist making work about spirituality that is neither uncritical nor critical of religion. I am simply looking at the creative capacity of humans to develop belief structures and noticing the similarities of modernism and religion. Minimalism is often seen as the purest form of modernist principles, and I think there are some very clear parallels between Greenbergian theory and religious Fundamentalism. 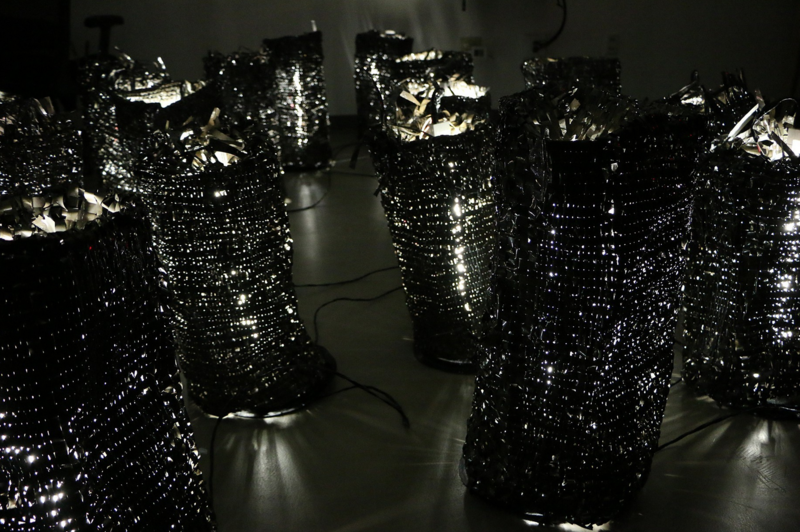 OPP: I 100% agree. I’m curious and interested in how Greenberg experiences midcentury abstraction and minimalism. I appreciate his first-person experience. It even fits with some of my own art-viewing experiences. The problem enters when he turns that personal experience of art into Dogma, i.e. defining “good” art as only the kind that fits his experience and his unexamined bias. So why do you think the opinion of this one man held so much weight and had such a deep and long-lasting effect on how we evaluate “good” art?

RM: Timing mostly, his philosophy was coming in at the end of modernism in a way- as art was boiling down further and further to be about itself and reduced to its essential elements, it’s no surprise that postmodernism emerged. Thus the generations of people who had devoted a life time of practice and study to modernism held on for dear life to the hard-edged box of Greenberg's ideas. Also the visual language had a lineage of 30+ years, so the historian could confidently talk about it, and humans, being the way they are, are happy if they can assuredly have something concrete to say and feel "right" about it.

OPP: Tell us about Nothing from Something, your new series “influenced by minimal and post-minimal art from the 60s-70s.” How is this influence showing up in your formal decisions?

RM: In moving to Virginia, I wanted to develop a series of pieces I could send to exhibits across the country. My starting point was looking to my art heroes: Robert Morris, Claire Zeisler, Sheila Hicks, Marina Abakanowicz and Eva Hesse. I was hoping there is an understood reference to “Making Something from Nothing” by Lucy Lippard. The sound components to these pieces reference the condition of feminism in our current culture and the confusion around what feminism means, noting the continued importance of the original text and relevance to Fiber Art education. 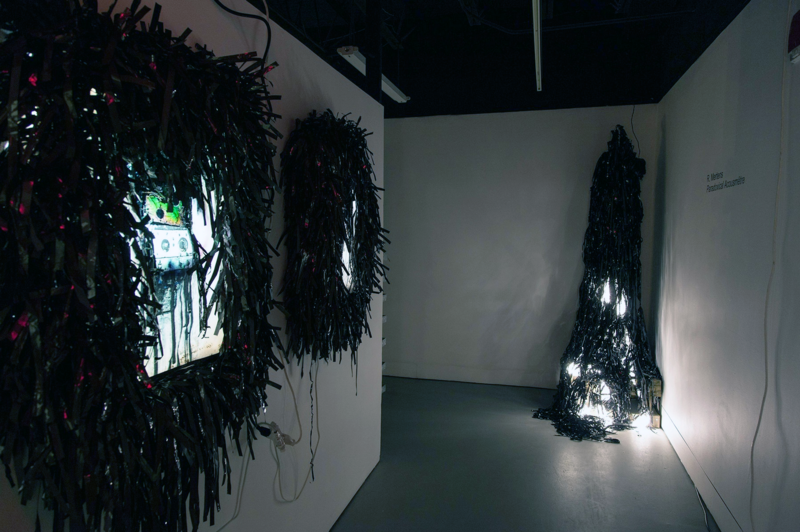 OPP: Tell us about your recent show Paradoxical Acousmetre.

RM: Paradoxical Acousmetres, as defined by Michel Chion, signifies “those deprived of some powers that are usually accorded to the acousmetre.” The Acousmetre is “the very voice of what is called the primary identification with the camera.” In cinema it is the omnipresent acousmatic voice of the narrator. Therefore, the Paradoxical Acousmetre is a narrator-creator identity, which is uninformed of the divergent path the “visual narrative” has taken from their “spoken narrative.”

In a sense it’s a continued investigation into failure and was part of the Spring Solo Series at the Arlington Art Center. I was interested in finding areas around the Center to do street performance/installations, which are linked to various laser cut Felt pieces housed in the gallery with an immersive sound installation. 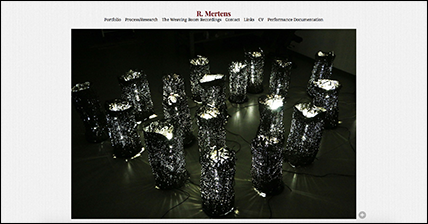 Featured Artist Interviews are conducted by Chicago-based artist Stacia Yeapanis. When she’s not writing for OPP, Stacia explores the relationship between repetition, desire and impermanence in cross-stitch embroideries, remix video, collage and impermanent installations. She is an Adjunct Assistant Professor in the Department of Fiber and Material Studies at The School of the Art Institute of Chicago, where received her MFA in 2006, and was a 2011-2012 Artist-in-Residence at BOLT in Chicago. Her solo exhibitions include I Still Haven’t Found What I’m Looking For (2013) at Klemm Gallery, Siena Heights University (Adrian, Michigan), Everything You Need is Already Here (2014) at Heaven Gallery (Chicago) and When Things Fall Apart, in the Annex Gallery at Lillstreet Art Center (Chicago). Stacia created site-responsive installations for two-person show Form Unbound (2015) at Dominican University's O’Connor Art Gallery (River Forest, IL) and SENTIENCE (2016) at The Ukrainian Institute of Modern Art. Her work was recently included in SHOWROOM, curated by Edra Soto, at the Chicago Artists’ Coalition. Stacia is currently preparing for a two-person show titled  Resist the Urge to Press Forward with Brent Fogt at Riverside Art Center (Riverside, Illinois) and Sacred Secular, a solo show at Indianapolis Arts Center in Indiana.