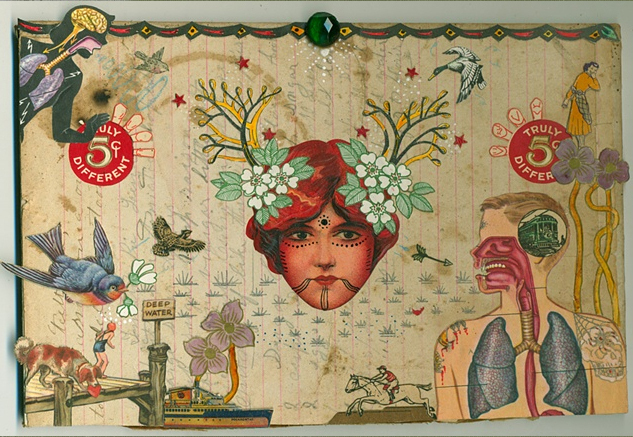 OtherPeoplesPixels: Your father immigrated to Chicago from Colombia, South America where he met your Irish Catholic mother on Chicago’s South Side. Reading your description of your experiences being “the product of the integration and movement of Chicago's populations, the artifacts that groups of people have left behind in the still identifiable ethnic neighborhoods, and the points where cultural identities have overlapped and melded” makes me curious about the relationship between the collages you make now and the art you may have made as a child. What did you like to draw while you were growing up?

Michael Pajon: When my Father was growing up in Colombia he told me about coming across American comic books and being fascinated with them. Even though he couldn't yet read in English he spent time with them redrawing the pictures.

I learned to draw very much the same way, reading and collecting comics as a kid the same way my Dad had.

I am still drawn to very graphic imagery like I was as a child. I remember drawing a lot of dinosaurs, airplanes, weird little cities with castles and skyscrapers. My imagination was a little scattered with ADD (attention deficit disorder) so I would often draw something into a picture that I might have seen on TV or in a movie we rented, and then sprinkle in a dinosaur or an exploding volcano. I distinctly remember drawing Spectre Man (sort of like Ultra Man) into coloring books and in the margins of other drawings as well as the Kit car from Knight Rider.  The only thing that I’ve gone back on to find interesting is that when drawing family members I used a dark brown crayon for my Dad a tan one for myself and my siblings and a pink crayon for my Mom. I wasn’t particularly aware of race at the time, but I was aware that my Dad was from some place far away. 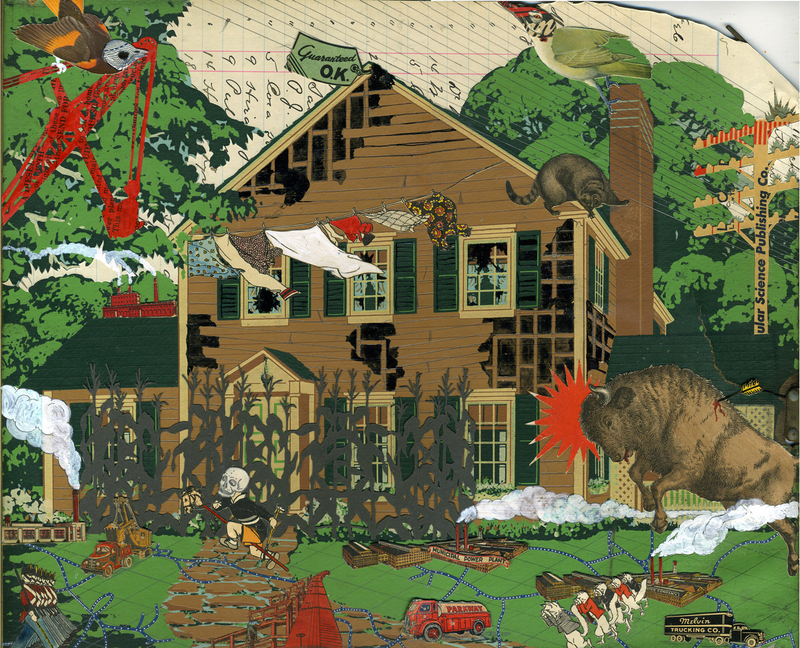 OPP: You recently moved from Chicago to New Orleans. Has your move impacted your art practice?

MP: Yes, I have more time to focus on my work. The pace of living down here is much more relaxed than Chicago. There are new sites sounds smells and rhythms to get used to and become a part of. The city creeps into my work in various ways, particularly with this series of houses that I’ve been working on. I bike past empty run down homes every day, many of which will be lost to the elements rather than become a home to a person in need.  Those pieces are about the ghosts and memories that haunt those places.OPP: Tell me about the artworld in New Orleans and your involvement in the community there.MP: Upon arriving I began assisting my friend Meg Turner in creating a community printshop. A lot of blood sweat and tears went into getting our shit together, and then the plug was pulled as of January 2011—we lost our space. She and a few others have recently relaunched it, and I am hoping to be teaching the occasional etching class again.  I have been part of a few group shows over the past year and a half, but most notably I was included in a larger exhibition of transplanted artists during Prospect 1.5 that ran from Nov 2010-Jan 2011.  The range of work ran from 2D to video and installation. OPP: The materials you use in your collages range in date from the 1880's-1950's. What is your interest in this time period?MP: I find that the imagery is unique and hard to find, but at the same time familiar.  Most likely you’ve seen something like it at a grandparents house or floating around a junk, thrift, or antique store. I hope that it will trigger a unique memory in the viewer. I tend to stay away from using things like Coca-Cola ads and the like for fear of coming off as kitschy. OPP: You keep a blog accessible from your website. On it you post pieces from your Standard American Collage series as you finish them. You also post the found imagery you come across. Do some of the found images that appear on your blog also end up in your collages?

MP: Sometimes, though I tend to post things that are either too large to use or perhaps I find interesting as a piece of history or nostalgia, like my post of a Nelson Algren poem that I found in a 1940’s Esquire magazine. I don’t necessarily find it interesting as collage material, but I love it as something found in its original context.

OPP: How do you select the images and materials that you post on your blog and that appear in your collages?

MP: I have boxes and boxes of things to choose from. I typically sift through things from piece to piece making a kind of mental inventory of what I have. I work rather intuitively, so if something just hits me the right way and it seems to fit I’ll try to include it.

The blog is simply another tool where I feel I can include people on the process of my art making and offer some of my personal interests as insight to that work. 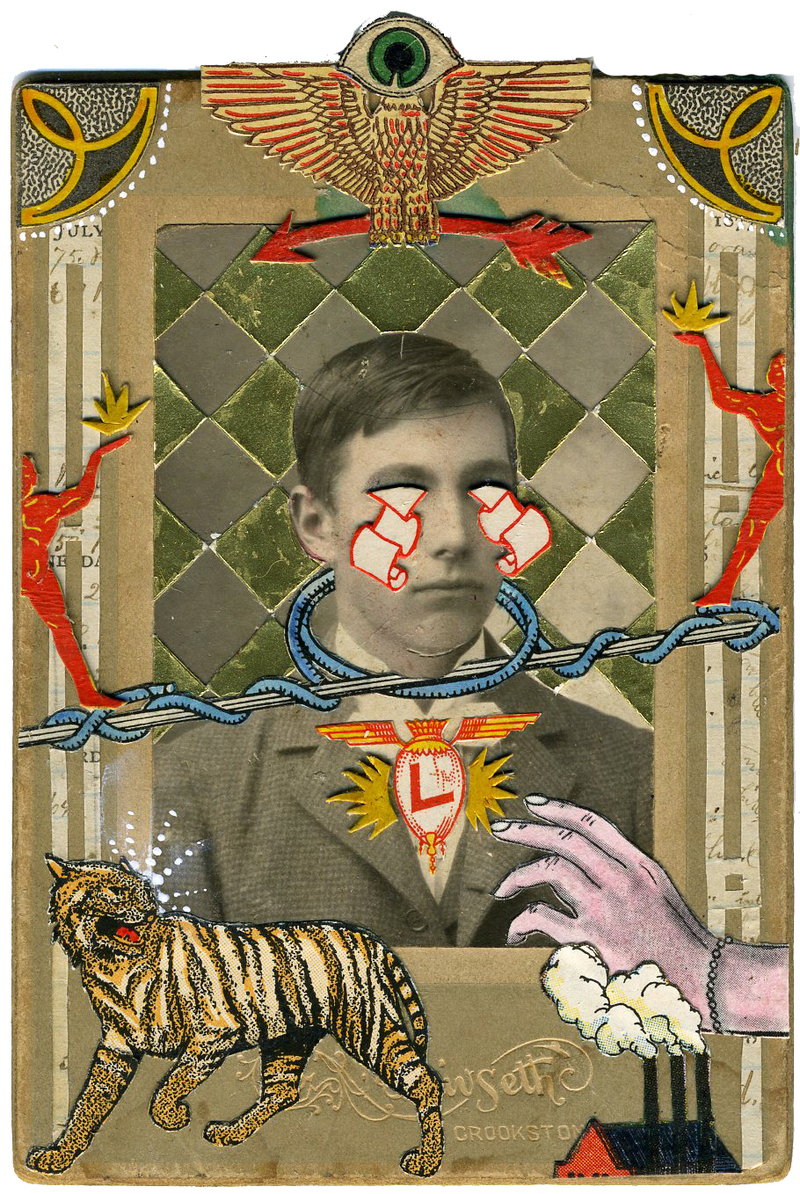 OPP: Everything in your collage work is original and painstakingly cut by hand. What's the hardest part of your process in general?

MP: The hardest part is leaving out something that you love and was possibly very difficult to cut out, but doesn’t fit or ad anything to the dialogue of the piece.

OPP: You have worked as a printmaking technician and assistant to artist Tony Fitzpatrick, how did working closely with an established artist early in your career influence your own practice?

MP: Immensely. I got a front row seat to understanding the ins-and-outs of the art world. He was and remains extremely supportive of my work, which is something that I cherish because it can be hard to find. Most artists are not nearly as generous with their time and resources as Tony. They can be secretive about their techniques or even suspect of younger artists. It’s hard to catch a break without getting a little push and it’s rare that you will find that person willing to give you a break.

Tony also treats his studio time like one should, as a job. He gets up, clocks in, gets his ass to work and doesn’t let anyone tell him “no.” I think this is a model to live by.

I have received emails from all walks of people since launching my website. Most of them simply inquire about the work, but more recently I have had teenagers and other young artists write to me. I make a point to offer them as much insight and help as I can. I try to offer them encouragement and give them a little push.

OPP: What will you be working on next?

MP: I’ve got a few things on the desk at the moment, but home improvement projects are also on the horizon. I have a show at Jonathan Ferrara Gallery here in New Orleans in March and will also have some work at Scope NYC. Watch for updates of new work as well as inspirational ephemera at paperandblades.tumblr.com. 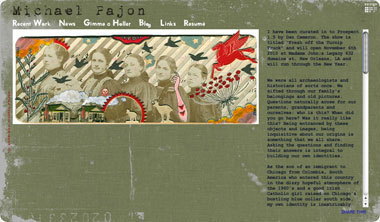