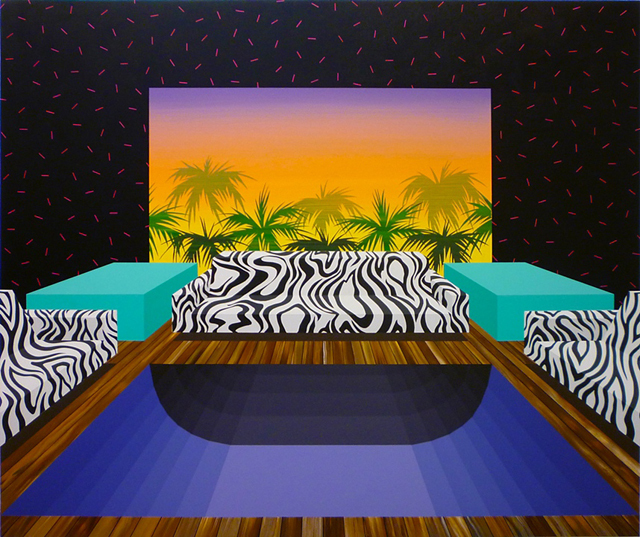 MICHAEL DOTSON’s large-scale acrylic paintings investigate luxury and fantasy in impossible spaces, referencing the simulated world of video games with a saturated color palette and an abundance of crisp, straight lines. The paintings are visually arresting, but decidedly un-sensual, emphasizing, the “dichotomy between the interaction and detachment prevalent in virtual reality.” Michael Dotson lives in Brooklyn, NY.

OtherPeoplesPixels: When I first saw your work, I immediately thought David Hockney meets video game graphics. I'm thinking particularly of paintings like Living Room (2010), Dream House Interior (2010) and Swimming Pool #4 (2010). Are either of these sources an influence for you?

Michael Dotson: I think the best thing I have ever heard someone say is that I was like "a more modern David Hockney from Outerspace." David's paintings and early video game graphics both had a way of reducing pictorial information in an elegant manner.  They also demonstrate how weird you can get visually and have something still be legible as this or that.Video of the making of Side by Side
2009
Acrylic on Canvas
30 x 46 in.

OPP: Could you describe your process, from idea inception to execution?

MD: It tends to vary a lot between pieces, but I like to keep it loose. I would say that the idea only serves as a catalyst to start a work, but once you start laying down shapes and colors, you have to react to those. It's almost like a game of Telephone, and every decision you make is an interpretation of an interpretation of your original idea. I am very slow at making paintings and usually by the end I don't really remember what I was thinking in the beginning. I used to make paintings where I would have them all sketched out on Photoshop beforehand and then just replicate a print out. That kind of work is very boring for me, and I would like for anything to be able to happen at any time. 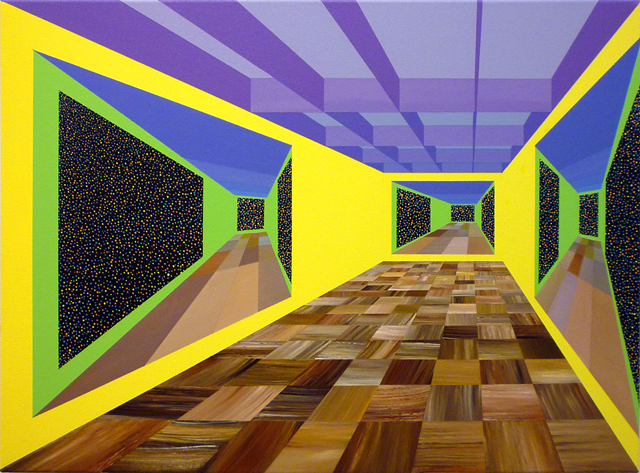 Art Gallery
2009
Acrylic on Canvas
22 x 30 inOPP: The luxury objects in your paintings look like 3D computer models of things instead of the things themselves. Do you have experience actually building models like this for computer games like Second Life or The Sims? Have you ever played these games or any other virtual reality games?

MD: I have never played those games and am not really a video game person. When I was younger my brother was always really good at video games. Most of the time, I would just watch him play, so I guess I learned to enjoy them passively.

I don't have much 3D modeling experience, although I have messed around in Google's Sketchup program a tiny bit. For me, the computer is too malleable; things can be changed so easily that decisions become unimportant. I like working in a manner where you have to make bold decisions and then deal with them. 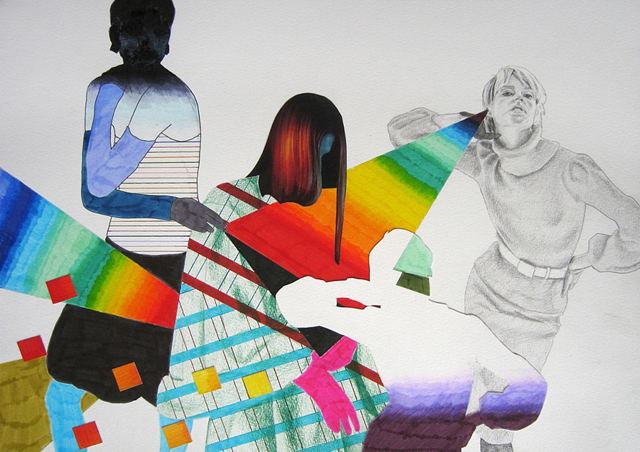 Untitled
2008OPP: Many of your earlier paintings and drawings contained figures, specifically celebrities and fashion models. But now the figure is nowhere to be found. Instead we see a lot more luxurious interiors and objects. What led to this shift?MD: Coming into my last year of undergrad, I just made a decision not to use photos as reference material anymore. Before that, my work always relied on a lot of time looking for things to draw and paint, and I didn't like having to depend on that for making work. In a way, the figure never really was in the work; I never made pieces with a figure occupying a space. Rather the work always highlighted the discontinuity of the figure with the rest of the picture. I would often have the bodies truncated, showing that they derived from a previous frame and that they were drawings of flat pictures, not drawings of people. In terms of the paintings now, there are no figures in them, because, in my mind, no figure could exist in these places.

MD: You’re absolutely right in making that connection. I think I have just tried to get at the core of that idea to the point where the picture doesn't really need to have luxury objects or celebrities in it. The painting is already a luxury object and has potential celebrity, so I feel like I can really just paint whatever I want. 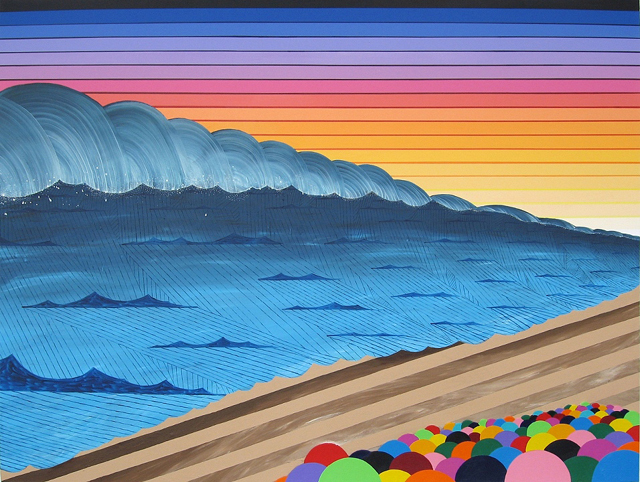 MD: I have just been working on a lot of smaller paintings right now. Scaling down was a lil’ harder than I expected, but I am getting the hang of it.

MD: I am in a couple group shows coming up: one in March at Circuit12 Contemporary in Dallas, and another in May with R.K. Projects in Providence RI. 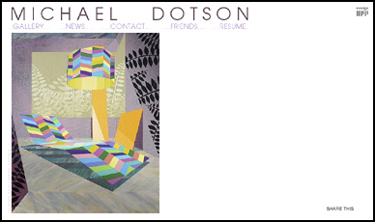