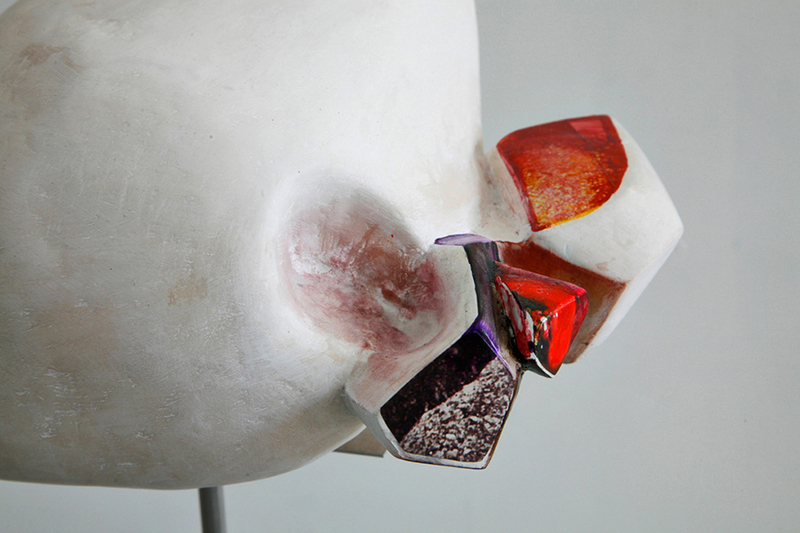 The physics of space, reflection and materiality play into LEE LEE CHAN's intuitive, compositional decisions, resulting in poetic juxtapositions of found materials, both natural and manufactured. Her background in painting informs her abstract sculptures, and her experiments with objects inform new paintings, creating an endless feedback loop between the two-dimensional and the three-dimensional. Lee Lee earned her BFA from the School of the Art Institute of Chicago in 2006 and her MFA from the Rhode Island School of Design in 2009. She has exhibited at extensively in Brooklyn: Tompkins Projects (2013), Brooklyn Fireproof (2012 and 2013) and Horse Trader Gallery (2009). Other exhibitions include Overseasoned Part Deux (2014) at Artemis Project Space in York, United Kingdom, Faraway Neighbor at Flux Factory in Long Island City, New York and Geography of Imagination (2009) at Adam House in New York City. Her work will be included in the Sluice Fair in London from October 16th -18th, 2015, and works on paper are available online through The Dorado Project. After over a decade living in the United States, Lee Lee has set up her studio in Hong Kong where she was born.

OtherPeoplesPixels: Both your BFA and MFA are in painting, but your sculptural work is so spot-on. What led you to introduce the three-dimensional into your practice?

Lee Lee Chan: My transition to sculpture was not a deliberated decision; it evolved organically. When I arrived at graduate school, I was making paintings by piecing together magazine imagery with painted surfaces. However, I found this limiting and did not know how to move forward. Then I saw a picture of Frank Stella’s paper maquette for Wheelbarrow in the studio, 1986, and it left a strong impression on me. I also discovered Judy Pfaff’s installations, in which she weaved painting and architecture into dynamic spaces. This intersection of pictorial and physical experience and the idea of “collage in space” really opened up possibilities for me.

I began making tabletop-sized, paper models from magazine collages, painted paper and photographs, arranging them as a stage for my photograph work. When I began to incorporate more tangible materials such as Styrofoam, aluminum and everyday objects, these models started to have a sculptural presence and took on their own life. This hands-on process of making the sculpture had started to dominate my practice.

Having a painting background is both a bliss and curse. I instinctively think of my sculptures as objects floating in space, just like images. However, as they grew more complex and larger, I became more aware of their relationship with the physical matter as well as the space between the viewer and the objects. 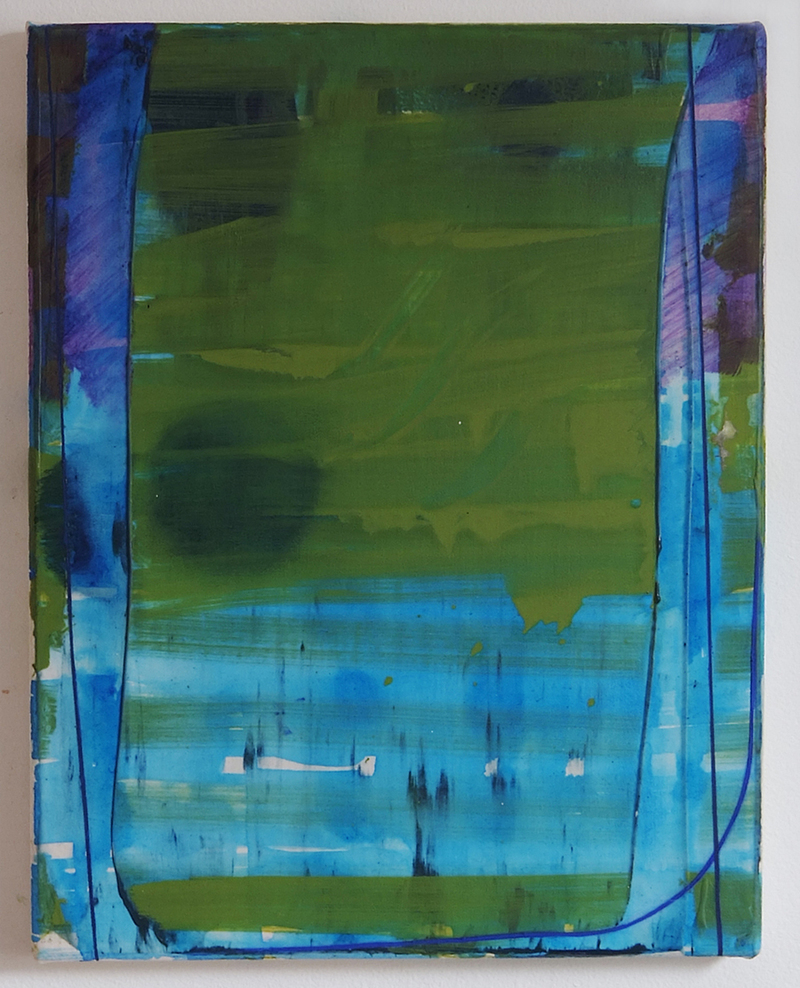 OPP: Has working in sculpture changed the way you think about painting?

LLC: I usually work in discrete phases within a medium. For a few months, I only make sculptures, then the next few months I make paintings and works on paper. Moving back and forth between these media has made me more aware of the limitations and strengths of each medium. It also helps me embrace the materiality of each medium instead of forcing them to do the things that they cannot do. Coming back to painting allows me to take a step back, and I tend to discover things that I did not notice before. Reoccurring motifs always make their way through: underlying geometry, biomorphic forms, motion, light, atmospheric space. Between the parallel universes of painting and sculpture, all things were interconnected. For instance, the sense of object weight in my painting has been directly influenced by my sculpture.  And the way I use an intricate system of overlapping to create spaces in my sculpture has affected the way I construct pictorial space to look through and hold imagery in my painting. Generally, I want to generate an intimate perceptual experience that encourages the rawness of seeing. 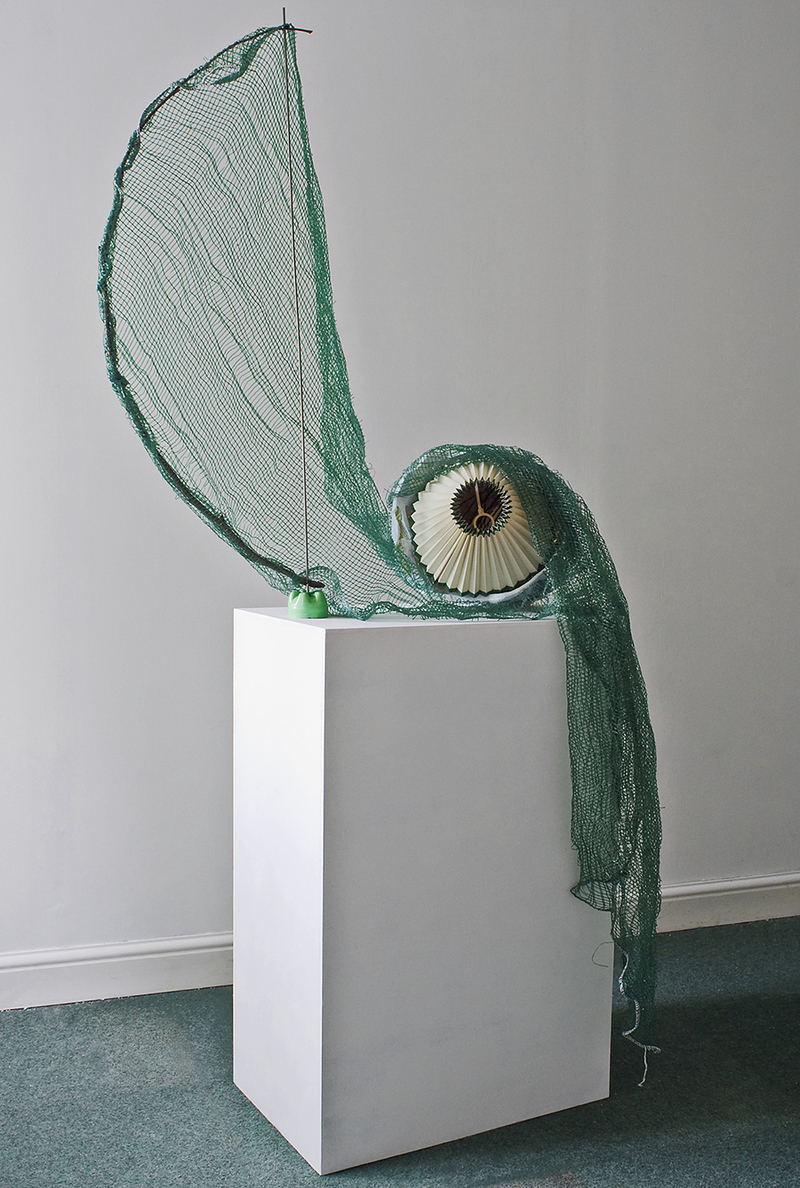 OPP: Your sculptures are often strange and wonderful juxtapositions of natural materials and recycled packaging, as in Keeper (2015) and Bower (2014). How do you decide what materials to work with? What's your collection process like?

LLC: My collection of objects has always been a reflection of my surroundings. I grew up in Hong Kong and, since I was 17, have lived in Utah, Chicago, New York City and York in the UK. Both Keeper and Bower were created during the time I lived in York. The dramatic change of environment, moving from New York City to medieval York, where I lived very close to nature, expanded my visual vocabulary. I started collecting tree bark and branches on my walks and experimented with incorporating these natural elements with ordinary objects like garden netting that I purchased from a local pound shop (the equivalent to a dollar store in the U.S.). I found the lamp shade in Bower next to a dumpster in my neighborhood.

I tend to collect objects that are mass-produced and easily accessible in everyday life: household items, commercial and industrial materials from the local hardware store, abandoned objects that to me have a pathetic quality. You could say that I collect anything that catches my eye, but then again, I consciously look for objects that do not carry any narrative or nostalgic quality. Any associated meaning gets in the way of my transforming them. The fact that these objects are so mundane and apparently without value prompts my desire to subvert this hierarchy by altering the way they are arranged and treated. Ultimately, I am interested in provoking uncertainty with these objects: how does something become valuable?

Most consistently, I use Aqua-Resin coated polystyrene packaging and plaster to build the structure for my totem-like sculptures. They look substantial but are in fact extremely lightweight, thus subverting the expectation of weight. These materials act both as surface and structure that house multiple micro spaces within the sculpture. They also reveal a trace of my process by highlighting the primacy of the handmade. Aqua-Resin and plaster create a limestone-like surface that reminds me of a construction site or ancient ruins. I guess this specific material sensibility came from my memory of growing up and working with pottery tomb figures in my parents’ Chinese antiques shop in Hong Kong. I imagine myself as an archaeologist of the present. 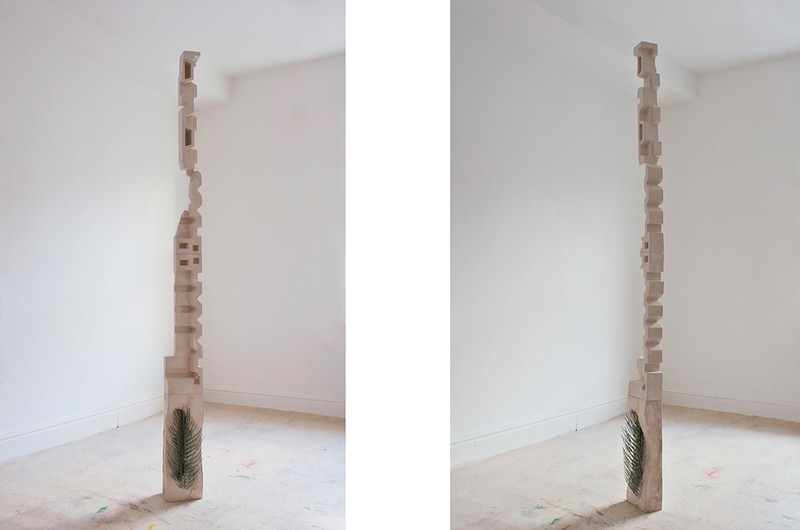 OPP: What’s your process like? Do you sketch beforehand or make intuitive moves as you go?

LLC: I see both my paintings and sculptures as a physical embodiment of the inside in a different form. They are a self-exploration of the subconscious.

Generally, my works do not start with sketches; rather they generate meaning through the process of making. I am completely open to the process and let my works develop intuitively. It’s a kind of a call-and-response approach, which involves ongoing subtracting and adding until an image or form slowly emerges. The decision-making is at the same time deliberate and improvisational. Ultimately, it is all about potential: I want to make known the unknown and make works that surprise me.

When painting, I usually start with a list of colors or a certain mood that I want to evoke. But, of course, everything tends to change once I actually put the paint down. Likewise, with sculpture I begin with materials or objects that trigger my imagination. I spend a lot of time looking at and playing with the relationships between them. Painting is a more direct, internalized process. With sculpture, I am dealing with the physics of actual space, gravity, weight and volume. I often rely on problem-solving experiments to better understand the properties, potential and technical issues of different materials. What are the elastic possibilities of my materials? How far can I feasibly push them? Which properties do I want to embrace? I work towards sculpture that generates its own internal logic, structure and energy, and thus functions more like an entity rather than merely an object. 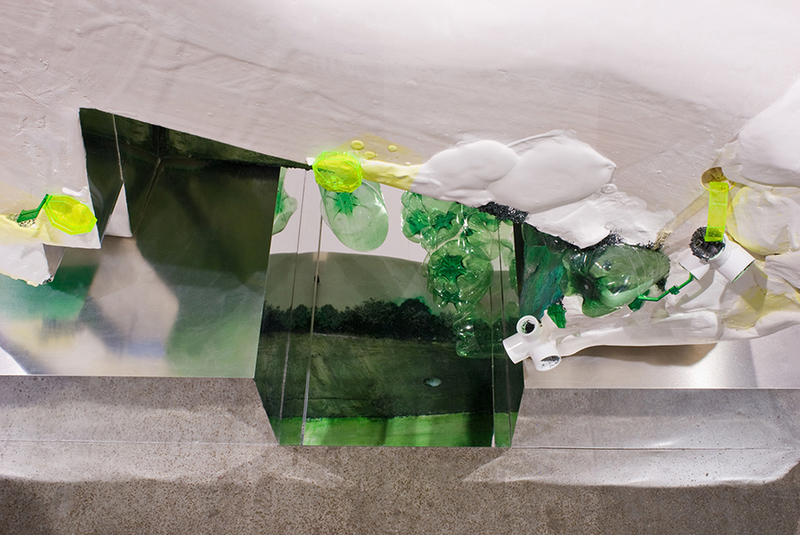 OPP:  What role does reflection play in your work?

LLC: I want to explore this interplay of space in my sculpture and one way of doing so is through the use of reflections. It facilitates a material shift from the exterior surface to the interior structure, blurs the boundary between inside and outside; between the actual and painted surface. My intention is not to use reflection in a highly technical way to deceive the eyes. I’m not attempting to hide its mechanisms; instead, I am interested in the junction of a pictorial way of looking and materiality of things in space.

Embedded in my sculptures are micro spaces, constructed either by Plexiglas mirror or aluminum. These materials reflect and absorb the surrounding light, generating a different sense of light for the micro space. This creates both an architecture and a landscape. I always think of the densely layered space in urban environments. In Hong Kong, for example, hidden areas exist everywhere in order to maximize space. I have always been intrigued by the way people expand their everyday, constrained surroundings in an organic and illusionistic way.

I want to offer viewers a rewarding discovery by creating work that demands more than a glimpse. I create space that you can either dive into or step back from in order to complete the whole picture. My sculptures generate new meanings depending on the angle from which viewers approach them. The aim is always the same: to evoke the fleeting moments that we encounter in daily life. 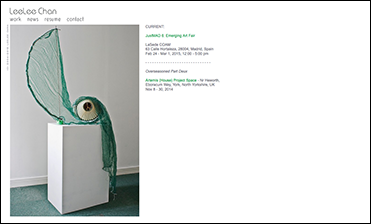