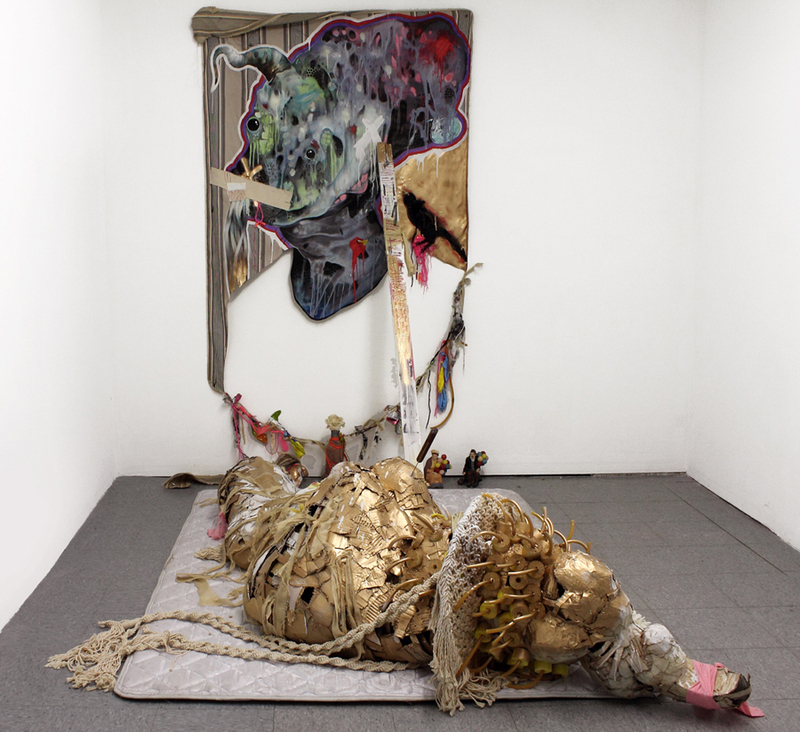 For The Slain Dragon Is Precisely The Monster of the Status Quo
2013
Cardboard, cloth, rubber, and bed mattress

Drawing on the stages of Joseph Campbell's Monomyth, LAVAR MUNROE assumes the role of trickster "to confront and disrupt disparities faced by the excluded and marginalized poorer-class blacks in the ghetto." He frames the economically disadvantaged as heroes and villains, kings and queens, gods and goddesses in his painting, sculpture and installation. He repeatedly blurs the line between the two-dimensional and the three-dimmensional just as he blurs the the line between honor and shame, rich and poor, man and animal. Born and raised in Nassau, Bahamas, Lavar moved to the United States in 2004 to attend Savannah College of Art and Design, where he received his BFA. In 2013, he received his MFA from Washington University in Saint Louis and was awarded a Joan Mitchell Foundation Grant and a scholarship to attend Skowhegan. In 2014, he will mount solo exhibitions at Segal Projects in Los Angeles and The National Art Gallery of the Bahamas. Lavar lives and works in Germantown, Maryland.

OtherPeoplesPixels: Could you talk about your chosen role as "trickster?" Are all artists tricksters?

Lavar Munroe: As an artist-trickster, my role is more amoral than immoral. It’s neither blasphemous nor extremely rebellious. It is my duty to blur the lines between what society dictates as right and wrong, since most societies are managed in a way whereby the dominant class benefits more so than the majority. In reference to the subjects my work targets, I speak with the voice of the ghetto, as the ghetto has little if any voice outside of its own confines. I embrace the idea of being a rebellious force against what is considered normal within the larger constructs of society. My duty is to be a champion of sorts for disadvantaged people who call the ghetto home.

I am the embodiment of cultural and societal hero. When considering the roles of the trickster, the folktale hero Robin Hood comes to mind. The idea of robbing the rich to give to the poor is parallel to that of the disruption of rules, boundaries and the status quo, all of which are attributes of the trickster. In The Hero With A Thousand Faces, Joseph Campbell states, “for the mythological hero is the champion not of things to become but of things becoming; the dragon to be slain by him is precisely the monster of the status quo.”

My work rebels against the status quo. It contradicts societal norms, and it celebrates what the mainstream dismisses. My art favors the disadvantaged and fights hierarchy. I intend to visually lure mainstream society with my work, allowing me the opportunity to further engage and educate people who look like me, who have lived the way I have and outsiders who could benefit from gaining a more realistic and broader understanding of the stereotypes I examine. It also affords me the opportunity to use the institution as my message board, exposing the taboos and preconceived ideas held against those most desperately in need.   Maybe subconsciously all artists are tricksters, but my undertakings are all executed consciously. 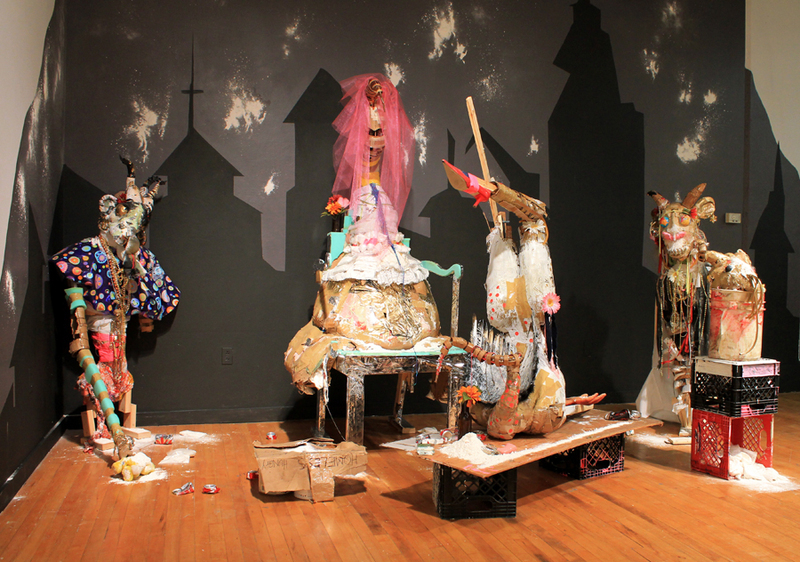 OPP: You grew up in the Bahamas. Did your upbringing inform the work you make now?

LM: Born and raised in the “impoverished” community of Grants Town in Nassau, Bahamas, I grew up challenged with a lot of stigmas and stereotypes that were associated with the community that I lived in. Though many people lived by meager means of survival, my family and I were economically more privileged than the vast majority of people in our community. There was simultaneously a sense of pride to be from the ghetto and a sense of resentment towards those who were afforded better lives outside of the ghetto.

Over the past nine years, I have observed many behavioral similarities between the mainstream society and the ghetto in the United States, a place that has constructed its own myths and stereotypes concerning race, poverty and hierarchical social structures. I have an advantage of having experienced both mainstream society and the ghetto, so I am able to use the stereotypes that exist in each sector to measure the strengths and downfalls of the other.

OPP: I'm curious about the manifestations of poverty in the Bahamas versus the cities you've lived in since moving to the U.S. What are the differences or similarities in your experience?

LM: There are similarities between the Bahamas and the United States in regard to societal structures and economic deprivation among poorer class blacks who reside in the ghetto. Like the ghetto in America, the ghetto in the Bahamas is an unstable place where many people are undereducated, mis-educated, uneducated, and left unfit to compete in the larger job market. As a result, many turn to lives of crime.

I retain my sense of pride to be from the ghetto and have learned to use the negative stereotypes of the ghetto as fuel for my visual investigations. 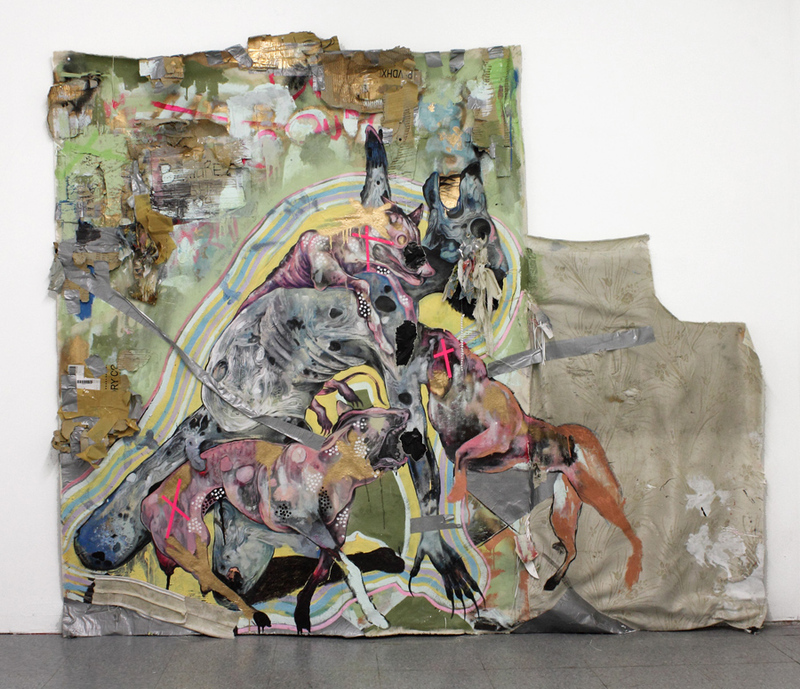 OPP: What are the benefits of addressing real-life "societal divisions dictated by wealth, class and race" through fiction and myth?

LM: Like mythological practitioners of ancient cultures, I use myth as a tool to further understand and evaluate societal disparities and my own existence. I use personification and allegory to narrate and elaborate on real life events.  Though framed in fictional narratives, my forms and images are all based on real life occurrences that I have either personally experienced or encountered through research (readings, documentaries and real world conversations).

In mythological narratives, beastly hybrids and animals function as allegoric substitutes for humans. The intersection of the paradigms of historic, civic and contemporary notions of the animal serve as a trajectory of investigation in my work. My intentions are to evoke a sense of power and employ social hierarchy, while also pointing to Otherness. In so doing, the animal is metaphor for the human Other. In particular, I am interested in contradictory understandings and the idea of skewing meanings as it relates to the animal in pre-modern and contemporary societies. 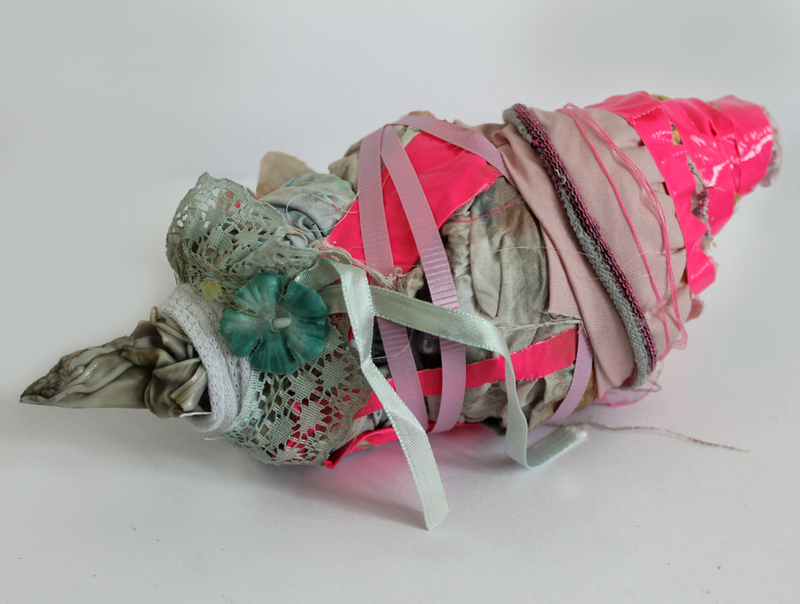 OPP: Shank=Survival is a series of sculptures that are also functional shanks. It seems counter-intuitive to make these make-shift weapons pretty, but then I think of bejeweled swords throughout history and the sacred moment in every quest movie I've ever seen when the hero/heroine forges his/her own weapon. Could you talk about aestheticization of tools of violence in this body of work?

LM: Joseph Campbell’s Monomyth, or the Hero’s Journey inspired this work. I was interested in the mythological stages of initiation, survival and the return as they relate to time served in prison. In many ghettos, having served time in prison is considered a rite of passage. I metaphorically align prison with the stage of the "Belly of the Beast" where, through violent and heroic acts, heroes are either born or reborn.

Aesthetically, I used material and color as a vehicle for revealing prison as a simultaneously violent, heroic and homoerotic space. I thought of the shank as trophy, the shank as weapon, the shank as phallus and the shank as relic. I was also interested in the notion of concealment through disguise. Pearls, flowers, pink cloth, thread, among other “feminine” materials, were used to make weapons which belong in the arguably male-dominated space of the prison.   This body of work was executed at the Skowhegan School of Painting and Sculpture. The environment there fueled the early beginnings of the shivs; my studio metaphorically and psychologically became the confines of a prison cell. 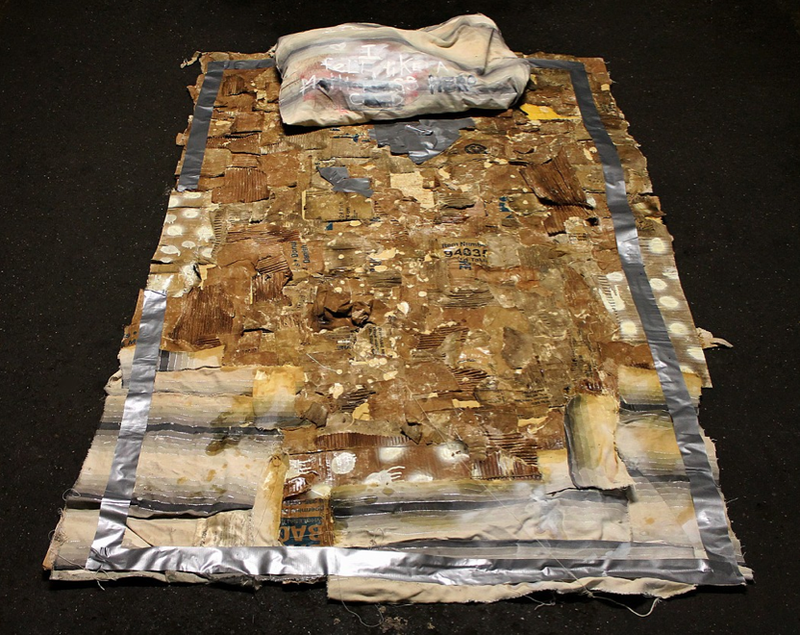 OPP: House of Indulgences is your only performative work to date. While in residency at Atlantic Center for The Arts in New Smyrna Beach, Florida, you recreated a dilapidated building used as a crack house from the street you lived on as a child from memory and performed inside it. What was your personal experience performing like? Do you think it was very different from what viewers experienced?

LM: That experience was surreal. I was intentionally under the influence of a substance and temporarily became that person that I grew up seeing. Putting myself in that state was important to the performance and to the message I wanted to portray. Becoming THE addict engaged both the audience and myself. I got a first hand experience of being crippled and watched, but not helped by able members of society. During the opening, visitors got to experience what it is like to peer into a crack house littered with broken glass and debris and to see a person in a hallucinogenic state desperate for help. As people looked over my lifeless body, I heard a few somber sobs and words such as powerful, touching, sad, compelling and moving. Many people also speculated that I was someone brought in off of the streets. Comments such as “that is not the artist” and “is that the artist?” echoed across the space.

OPP: Where Heroes Lay is a series of “bed” sculptures made mostly of brown cardboard, evoking the cardboard boxes that many homeless people sleep on and in. Tell us about this series.

LM: The series grew from a material exchange with a homeless person. Periodically, I removed soiled cardboard pieces from the homeless person’s sleeping quarters and replaced it with clean cardboard. In a sense, I became a maid. By serving him as the trickster, I inconspicuously inducted the homeless person into the role of the Hero. Secondly, presenting the Hero’s soiled bedding as a consumer good in the art-market allows the objects to serve as weapons of critique and ridicule targeted against mainstream society. 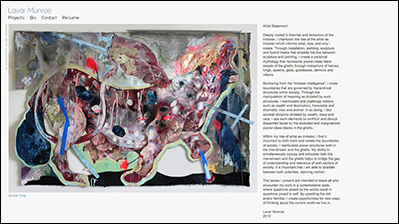