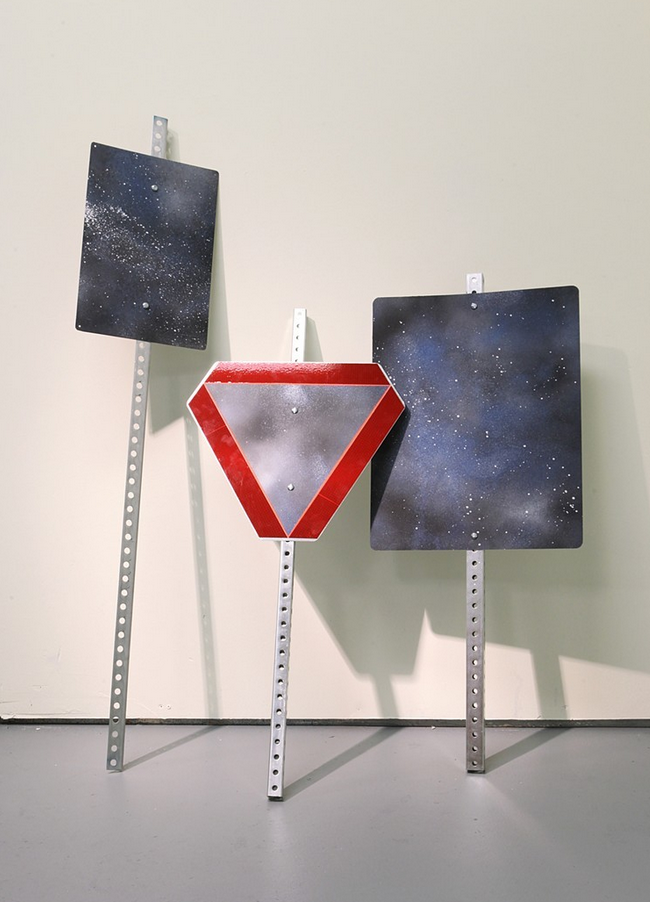 KYLE HERRINGTON creates humorously profound sculptures, cut-paper works and text-based paintings. Using the vastness of space as a symbolic background for more quotidian psychological and emotional unknowns, he explores the drama and anxiety of being an average human on planet earth in the Digital Age. Kyle graduated from Ball State University in 2006 with a BFA in Painting. He was the 2012  Artist-In-Residence at the Indiana State Museum. Recent solo exhibitions in Indianapolis include The Worst Person in the World (2014) at General Public Collective, Catcalls (2013) at the Indianapolis Center and Backyard Phenomena (2013) at Harrison Center for the Arts. He is currently developing a new series of work which he hopes to exhibit in Fall 2016. Kyle lives in Indianapolis, where he is the Director of Exhibitions at the Indianapolis Art Center.


OtherPeoplesPixels: You work in a variety of media: sculpture, painting, cut paper text and installation. Can you give us a brief history of your life as an artist? Have you always been so interdisciplinary?

Kyle Herrington: Growing up as a teenager, I always saw myself as a painter. I was a big TV kid, and it always seemed like every artist on television was depicted as this serious brooding painter. I went to college at Ball State University for a degree in painting, but I was very lucky that my mentor there encouraged me to work very experimentally and across disciplines. I often found myself skirting the line between sculpture and painting but always landed on the side of painting. It wasn’t until I was out of college that I found myself setting up these complicated still-lives for paintings in my studio and something clicked. I realized that instead of painting these vignettes, maybe I should just let the set-ups be sculptures. That was an important and defining realization.

I’m also a very impatient artist. I work between media and on several pieces at the same time; I like being able to switch gears if I am stumped or frustrated by a certain piece. The pieces can inform each other, have a dialogue, and mature at the same time. Sometimes a breakthrough in a sculpture can lead to a run of resolutions in a painting series or vice versa. Plus, the curator in me really likes to see different mediums living in the same space together. 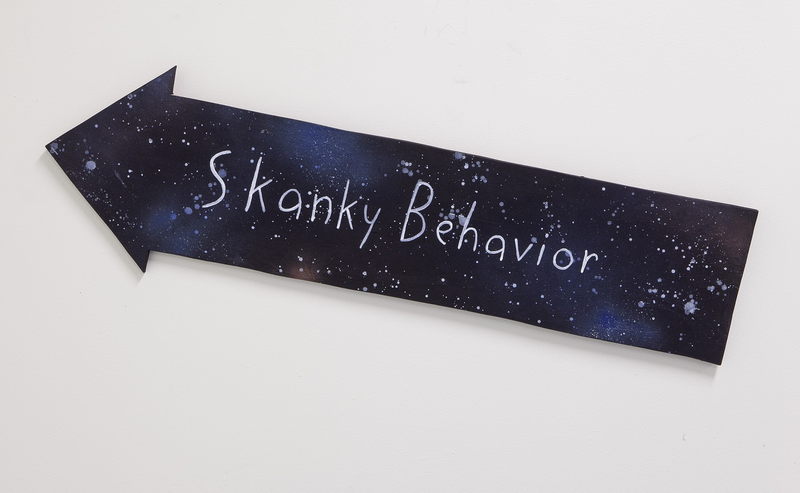 OPP: Have you always worked so extensively with text?

KH: It was around that same time that the text really started creeping into the work. I was struggling to explore ideas through images and symbols without being overt. At a certain point, I just said screw it and found it was easier to write what I was thinking about directly on the canvas. This was a huge step in finding freedom for myself as an artist. Suddenly I didn’t have to mask or disguise or romanticize what I was trying to explore. Instead I just blatantly put it out there, which also made the work a little easier for the viewer. I found this allowed me to get much more playful with the work and have more fun making it. 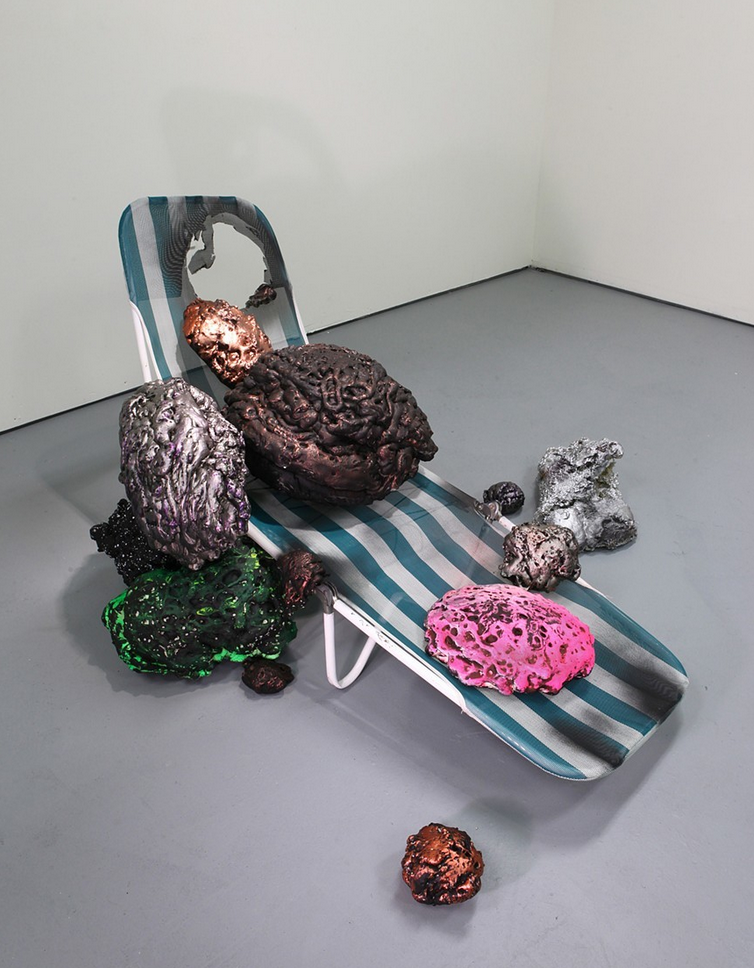 The End of Leisure
Mixed media
2012

OPP: I read several articles that refer to your anxieties about turning 30 as a major inspiration for your 2013 show Backyard Phenomena at Harrison Center for the Arts in Indianapolis. The End of Leisure (2012) and Party Killer (2013), for example, are sculptural tableaux that capture the aftermath of fallen meteors on scenes of leisure. I remember when impending adulthood was overwhelming. But now, you are three years older. Have you realized yet that the 30s are WAAAAAAY better than the 20s?

KH: Oh definitely! A lot of that work was a response to the reactions happening around me by my peers and colleagues about aging—I was always very ready to leave my twenties behind. A big influence of that body of work was disaster movies and these images of hoards of people running around completely falling apart and going ballistic. I felt this weird sense of calm isolation at the time while simultaneously witnessing people I went to high school with freak out about turning thirty on social media. At times it felt a bit like the movie Airplane!—completely nonsensical. So, I l decided to indulge the idea and experience of  the melodrama, and I ended up finding a bit of my own anxieties somewhere in the mix.

Three years later, I still find the whole idea relevant, especially the social media/hysterics/sensationalism thing. In a really schadenfreude way I secretly love it when Facebook or Twitter blows up into dramatics over any given thing going on in pop culture. It’s such a disgusting and simultaneously enlightening, entertaining shit show about the human condition in the 21st century. It’s less about aging itself now and more about the fact that people don’t really outgrow these insane, unfiltered sensational attitudes. It’s a really magnified focus onto someone’s character and motivations when they’re so unapologetically dramatic. Sometimes it can be over a legitimate political or human-rights stance, but just as often it’s about something trivial like a celebrity or TV commercial. Those are the nuggets of insanity that I’m drawn to: people evangelizing and going into hysterics about a paper towel ad. To me, that’s absolute gold. 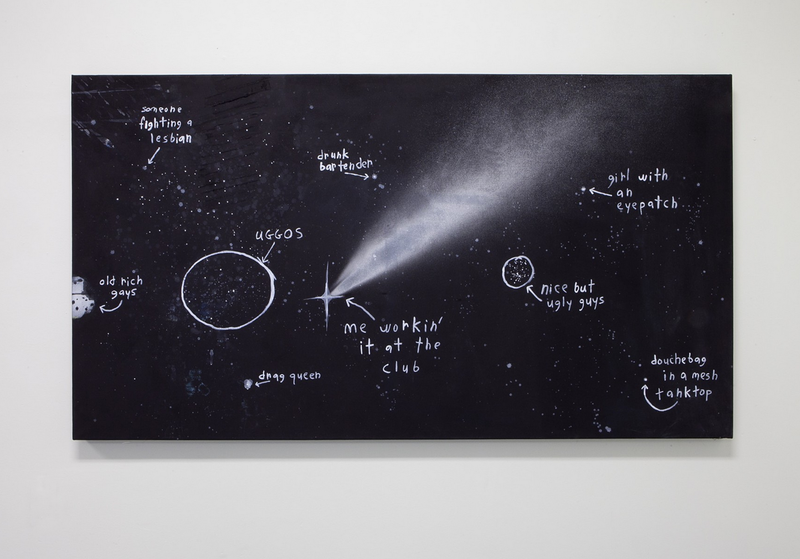 OPP: Works like Gay Club (2015), Send Nudes (2012) and Motivational Poster #1 (2012), seem to be about another anxiety associated with getting older. . . the insecurities of dating or hooking up in the Digital Age. Could you talk about the recurring vastness of space as the backdrop in these text-based paintings?

KH: Space has become an increasingly loaded symbol for me. It stands in for isolation, frustration, confusion, feeling lost. I never really dated when I was younger so once I started doing so in my 30s it became incredibly overwhelming at times. I joined a lot of dating websites and most times it felt like I was just speaking into these vast voids and hoping something stuck. A lot of those pieces are influenced by that. The whole process of online dating became more and more frustrating, but also more comical. 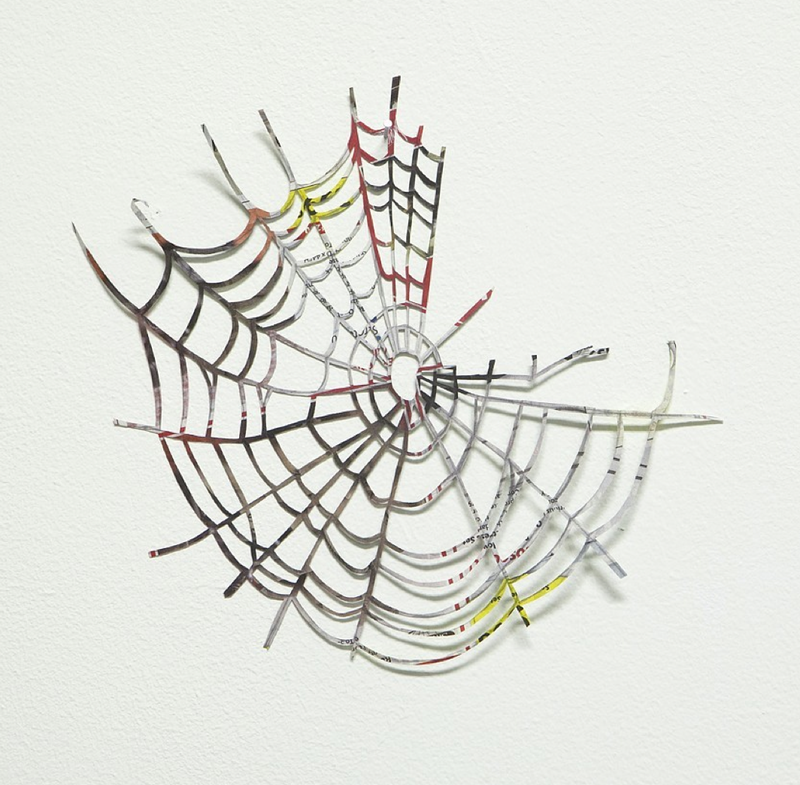 OPP: I’m particularly taken with your hand-cut spiderwebs from 2012. They are quite distinct from everything else you do, but some of your text-based works—Another Woman (2015) and Pizza (2015)—are also hand-cut. Can you contextualize the webs for us and talk about why you choose to create text out of negative space?

KH: The webs came from this strange compulsion I have for collecting grocery circulars. They’re pretty common litter and junk mail in Indiana and I would imagine in most suburbs. There’s something very Midwestern about them that I love. I had this ongoing collection of them and one day made the connection between this ubiquitous material and weeds or spiderwebs. Cutting them out with an X-acto knife became a very therapeutic and meditative thing for me, and they’re a nice break from the paintings and sculptures.  I also work a lot on paper so the cut-outs organically carried into those pieces with the Maury show titles. I loved the graphic qualities of those TV show titles, and I wanted to recreate that feeling and not just do handwritten text in those.

OPP: Wow! I didn’t realize those titles came from Maury! But now that you say that, I see more drama in the text that relates to that social media hysteria you mentioned. What are some other sources for text in your work? Is all the language appropriated?

KH: A lot of the phrases or text I use are things I hear in the real world or on television. I keep a sketchbook full of quotes, phrases and pieces of conversations I overhear and pull from them often when I'm trying to resolve a piece. Sometimes they are directly appropriated, but other times they are mash-ups or edited versions in my own wording for better flow. I find myself really drawn to the ritual of people putting on airs or puffing themselves up. It’s this bizarre sense of extroverted or manufactured confidence that I'm pretty mesmerized by. Reality TV and talks show are a great source for this type of hyper-dramatic self-esteem. Also gay bars. I get a lot of ideas for paintings there. As gay men, I sometimes wonder if we have this ingrained flair for the dramatic. Then you add alcohol and you get the biggest display of theatrics. It’s campy and over-the-top, and I just eat it all up with a spoon. I owe a lot of my paintings to my time in gay bars. 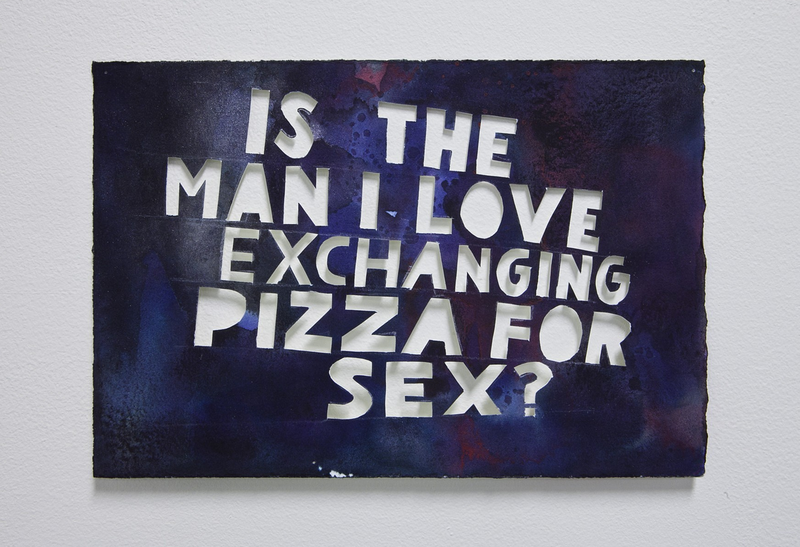 KH: I told somebody years ago that I liked to use humor as a nasty trick to get people engaged in my work. I felt dirty for a long time about making humorous work. I think it’s very common for artists, and especially painters, to feel pressured into holding this kind of academic reverence for what they’re making. When I first got out of school, I was making these large, very academic paintings that I was trying to show around town and I was really bored by most of them. And then I was making these little wacky funny studies in secret and I was way more interested in those. It wasn’t until I stopped looking at humor as a gimmick and as more of a conduit into serious issues that I felt like I could really pull the trigger on changing directions in my work.

Humor serves as an entry point into topics people may not otherwise talk about; it eases people into an otherwise difficult mindset. A lot of my work deals with anxiety, depression and awkwardness, but the veil of humor makes those topics more comfortable and palatable in order to spark dialogue. I saw the Wayne White documentary Beauty is Embarrassing a few years ago, and I wrote down something he said in one of my sketchbooks: “I'm often as frustrated at the world as most people are. But I think frustration is hilarious. One of my missions is to bring humor into fine art. It's sacred.” I just love that. 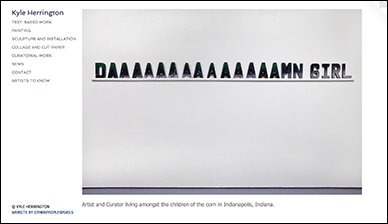