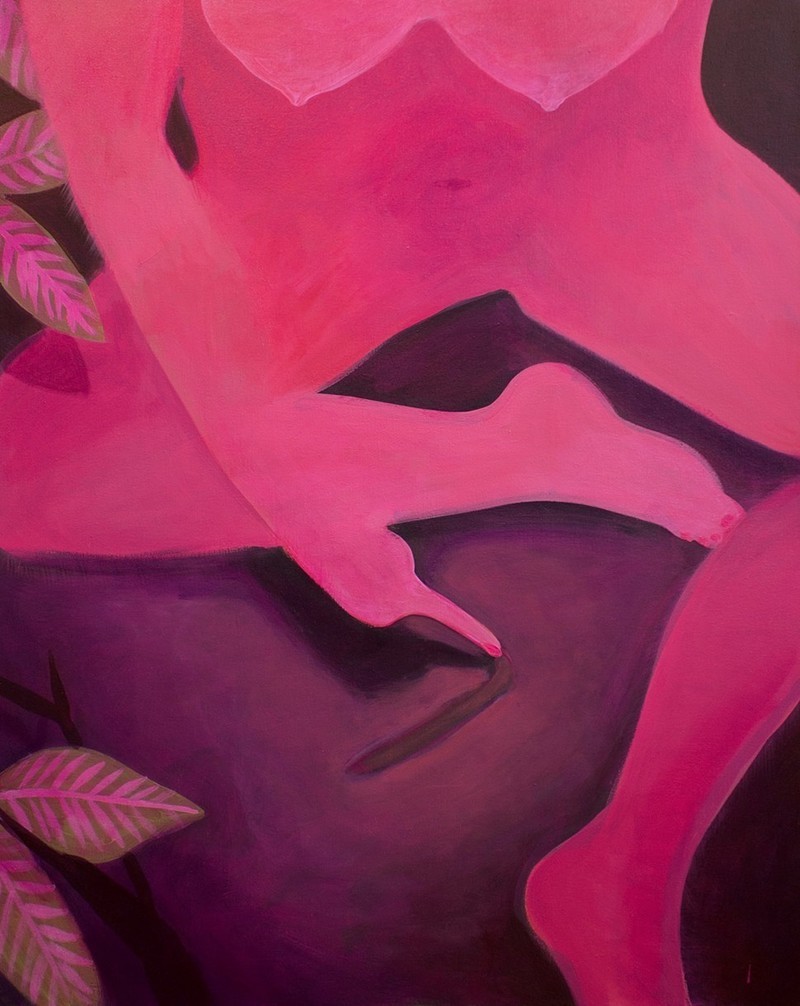 KRISTEN SANDERS describes her paintings as "prehistoric science fiction." In a satured pallette of pinks and greens, she explores the origins of human existence, mark-making and self-awareness. Her work is populated by both female hominids and female AI robots, both of which call into question our contemporary understanding of what it means to be human.  Kristen earned her BFA in 2012 at the University of California Davis and her MFA in 2016 at Virginia Commonwealth University. Her work has been included in exhibitions at Present Company (Brooklyn), Pro Arts (Oakland) and Basement Gallery (Davis, California). In 2017, she collaborated with artist Devin Harclerode for Maternity Leave: Para-Natural Pregnancies at Sediment Arts in Richmond, Virginia and mounted her solo show Soft Origin at Sadie Halie Projects, an artist-run space in Minneapolis. Kristen lives and works in Minneapolis.

OtherPeoplesPixels: Tell us about the recurring pink hominids that show up in paintings, ceramics and costumes. Who are they and why do you keep telling their story?

Kristen Sanders: The pink hominids are all ambiguous human ancestors (or perhaps future human descendants). They are fluid characters who fluctuate between the prehistoric and the futuristic, and sometimes they appear as green or red in addition to pink. They are nonhuman discoverers and inventors, and they allow me to explore ideas of origin, consciousness, gender and ultimately, humanness.

It all started when I became curious about the origins of image making—what kinds of images were made before cave paintings and petroglyphs? What was the first image? I imagined that the first image, unpreserved in the fossil record and therefore unknowable, must have been a line in the dirt drawn with a finger. I designated the hominid as the maker of this first mark, and I have explored and expanded upon this narrative in my work ever since. 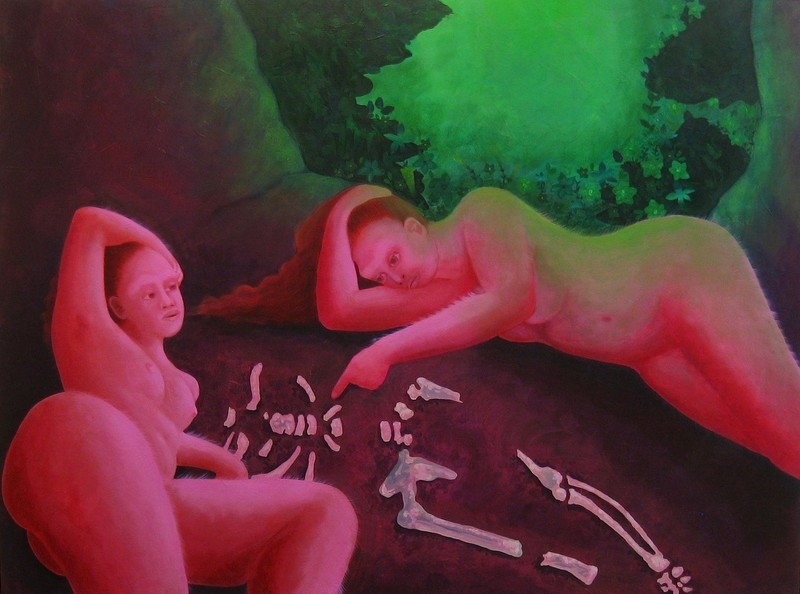 OPP: Your palette is distinctly pink/red and green. Why do you choose these colors for this subject matter?

KS: I want to keep the images I paint within the realm of fiction (a "prehistoric science fiction" as I like to call it) so I knew I didn't want to use any naturalistic colors. I chose pink/red and green as color compliments. The green initially came about as a mysterious, sci-fi glow, which confounds the timeframe in which my painted imaged might exist. Pink is an interesting color because it feels strangely plastic and uncanny when used to depict something in nature or something prehistoric. I am also interested in examining pink's initial connotations of the feminine and what happens as it shifts into red. 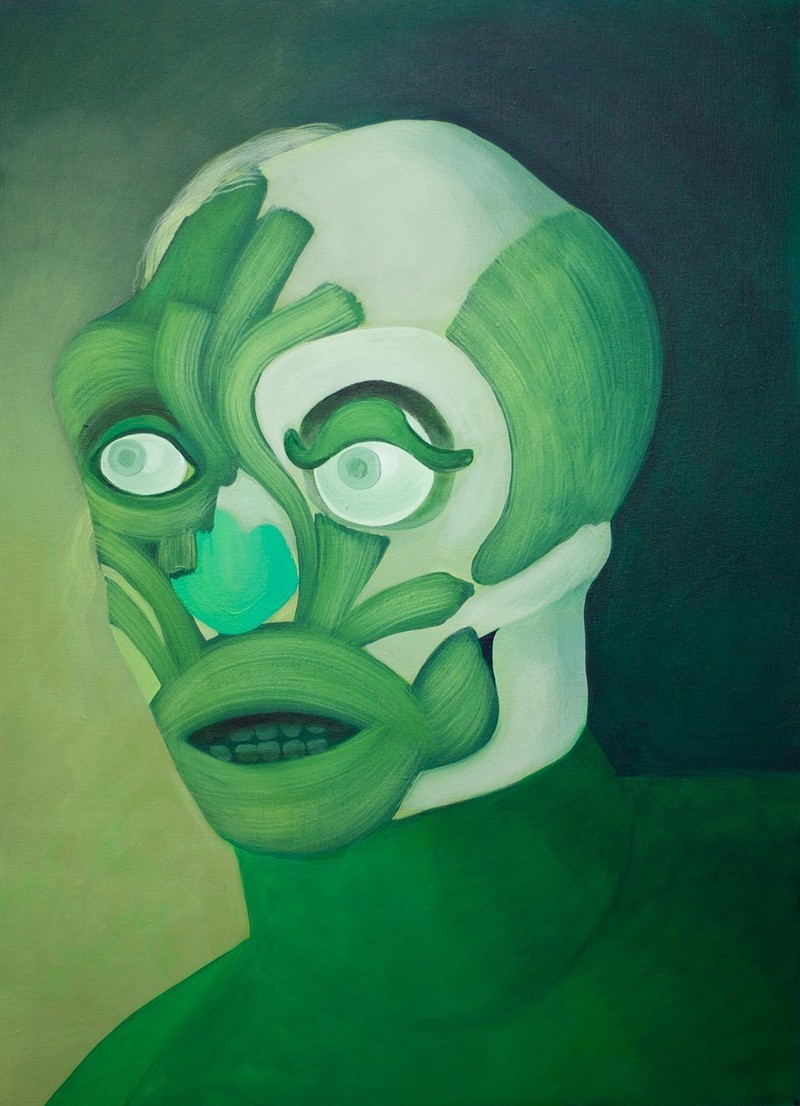 OPP: How do you balance research and myth in your practice?

KS: Research is typically a starting point in my work. I read books and essays, watch movies, conduct google image searches and check in on current anthropological findings. I will pick out an idea as a jumping off point, whether for a single piece or a series of works, and I will then imagine scenarios or invent narratives surrounding the idea. The latter is the myth. However, sometimes myth comes first and then I use research to clarify or expand the narrative. If I consider my larger body of work over the past several years, then I can see that research and myth are continuously bouncing off one another—this is the process by which I conceptualize the images and objects I make. 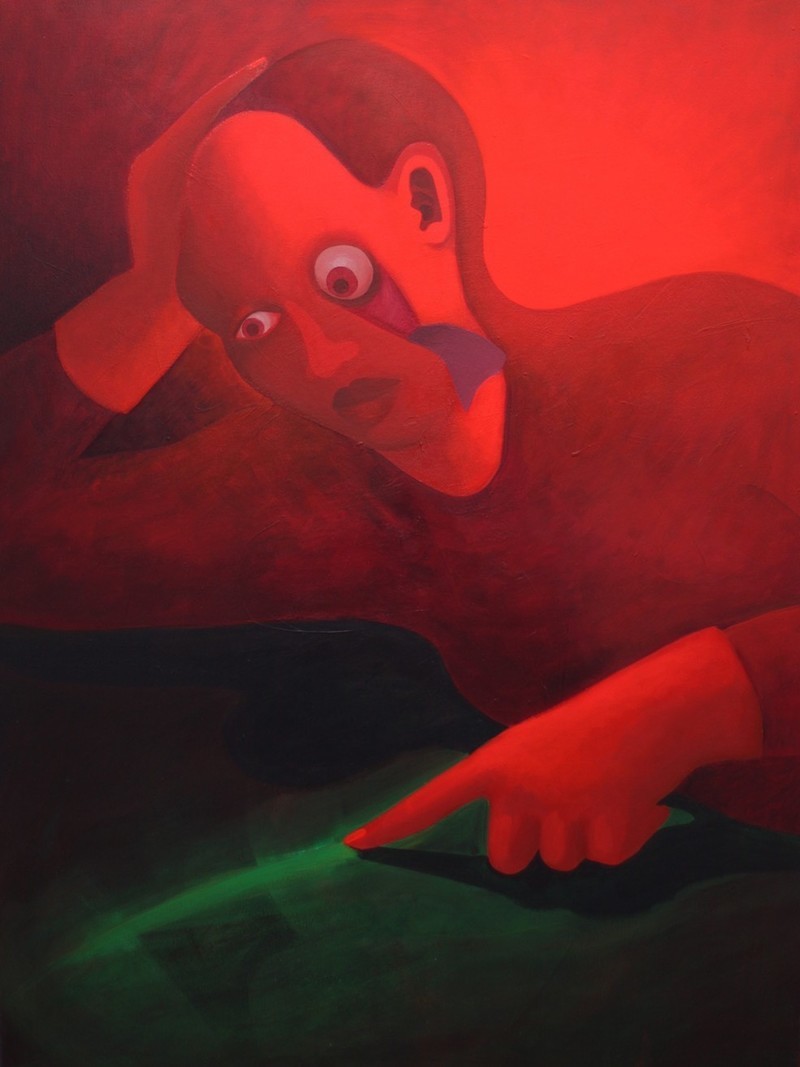 OPP: Why is it important to challenge the patriarchal bias of Anthropology?

KS: It’s important to address the history of patriarchal bias in Anthropology because it has shaped our understanding of our evolutionary history. If biases influence how anthropologists have pieced together the lives of our ancestors, these biases can then reinforce the gender stereotypes that initially generated them, and it becomes a cycle. For example, say an anthropologist theorizes that male hominids were aggressive hunters while female hominids focused on mothering offspring. The theory then gets published, and perhaps a museum installs a diorama that illustrates this scene. The public can then conclude that the stereotype that women are nurturing and men are aggressive must be true because it has an evolutionary basis. However, the ways in which a particular hominid species might have conceptualized gender (if at all) are simply unknowable. It's important to remember that any reconstruction of the day to day lives of our ancestors is based on our own human projections.

OPP: What books should we read if we want to know more? 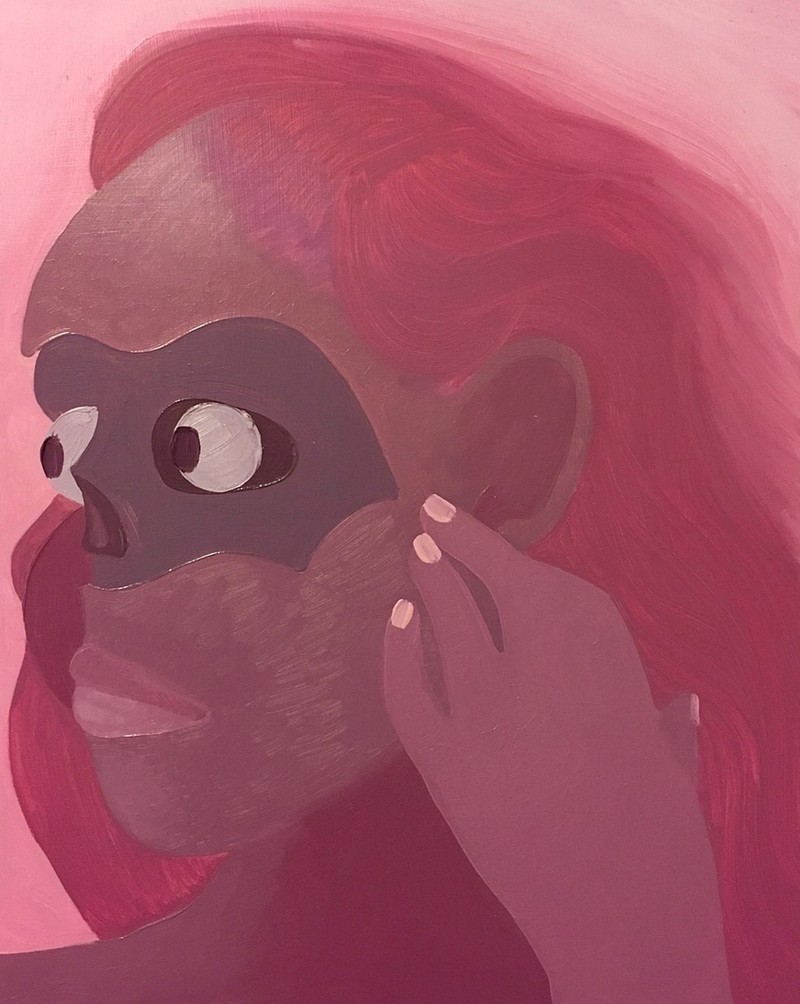 OPP: What Happens When I Turn Around and Tell You I'm Real 1 and 2 (2016) hint at AI instead of our prehistoric ancestors. What’s the connection between robots and early hominids?

KS: For me the AI robot is a futuristic mirror of the hominid. One is pre-human and the other is post-human, and I merge these two figures into one within my paintings. That is why the hominids sometimes have mask-like faces or peeling skin. One anthropologist once asserted that female hominids were incapable of inventing anything useful, and therefore incapable of crossing that threshold into ‘human.' I am interested in drawing parallels between this de-emphasis of women in prehistory and the tropes of sexualized female robots in film. 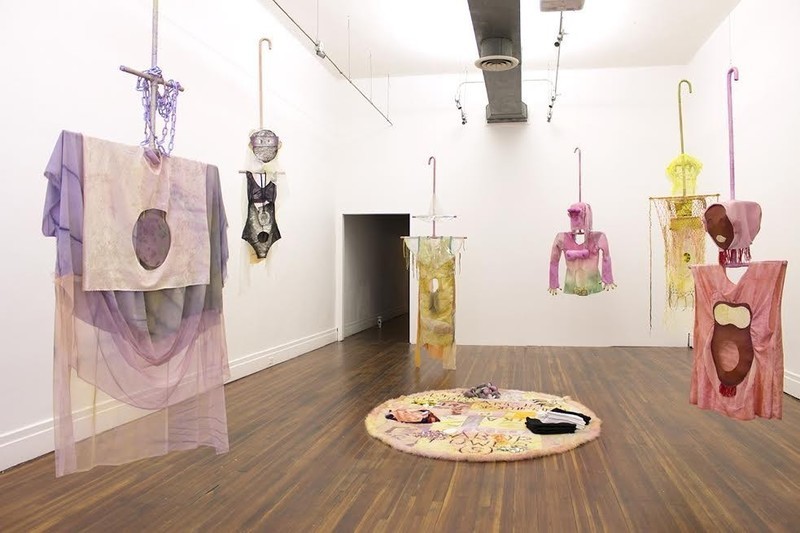 OPP: You’ve recently collaborated with artist Devin Harclerode to create Maternity Leave: Para-Natural Pregnancies (2017) at Sediment in Richmond, Virginia. Tell us about the show. How did the collaboration come about?

KS: Devin and I are friends and colleagues from Virginia Commonwealth University's MFA program. We became interested in future collaborations after seeing our work exhibited together for our first year candidacy review. Devin, who is currently based in Richmond, approached me last summer when Sediment had an open call out for proposals. We both had been thinking about different ideas surrounding pregnancy and birth. We decided to make outfits and suits because that is where our practices overlap formally, and each suit addresses a myth or narrative surrounding birth or anti-birth. Some examples are the dated idea that maternity was incompatible with invention for female hominids and the historic ritual of placing an onion in the vagina to test for fertility. We made objects and accessories corresponding to each suit that were sold to raise money for Richmond Reproductive Freedom Project, where Devin has also been working.

OPP: Can you explain what you mean by the term anti-birth?

KS: Anti-birth can refer to the opposite of a birth or an obstruction of birth, such as Devin's use of the abortifacient tansy in Heretic Suit. It can also refer to an alternative birth, such as my Future Suit, which considered robot birth as an assembly of parts rather than a gestation and a delivery. 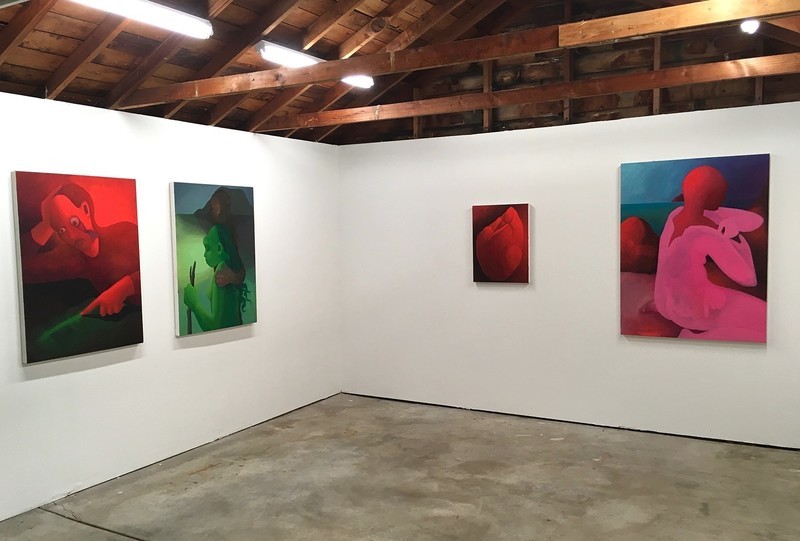 OPP: Soft Origin just closed at Sadie Halie. What new explorations do you tackle in this show that you haven't addressed before? And new directions for the next body of work?

KS: Sadie Halie is a small space so I got to play around with smaller scale paintings. I also wanted to make some paintings that don't feature a figure, and instead focus more on the objects and tools that the hominid characters might have made. Moving forward, I am beginning to research some of the robots that exist today, such as Sophia the robot, and I want to further explore the connections between the hominid and the AI robot. 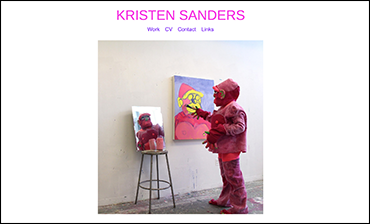