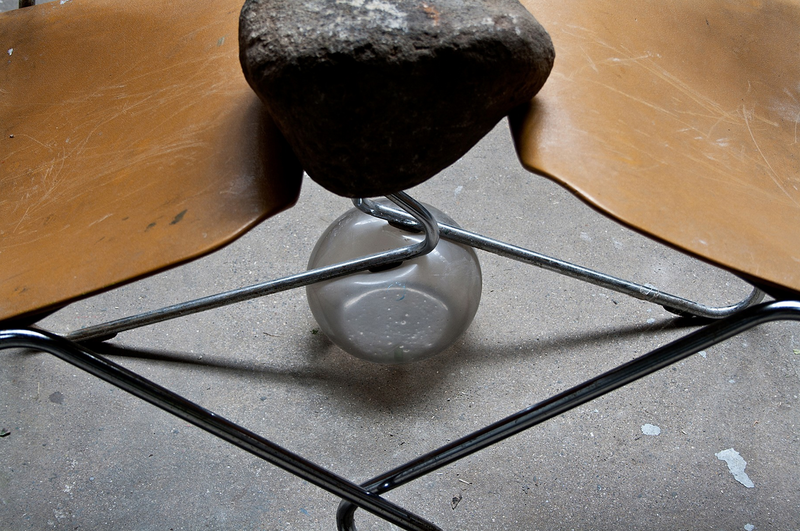 KALENA PATTON's carefully balances bowling balls on columns of crystal goblets, hammer heads inside porcelain teacups and workout weights on tiny, decorative vases. Her precarious arrangements of found objects hint at the profound strength of the delicate support objects, poetically drawing together physics and Feminist theory. Kalena earned her BFA (2007) from the University of Nevada, Las Vegas and her MFA (2012) from Parsons, The New School for Design in New York. In the Fall and Winter of 2015, she was an Artist-in-Residence at Oxbow School of Art (Saugatuck, Michigan). In August 2015 she co-facilitated a workshop with Historian Athena Eliades at the Pacific Coast Branch of the American Historical Association’s Annual Conference in Sacramento. Titled Unsilencing Femicide in Ciudad Juárez: History and Art Making, the workshop explored art-making as a medium for understanding social injustices and gender perspectives. Kalena lives in Brooklyn, where she also works as a floral designer.

OtherPeoplesPixels: From your statement: “Loosely informed by physics, feminism, and my experience living in Las Vegas as a young woman, my practice is an ongoing exploration of the process of becoming by creating systems of objects “on the verge” while simultaneously referencing their past and anticipating the present.” Will you expand on the relationship between physics and feminism in your work?

Kalena Patton: The major link between feminism and physics is essentially the relationship between discourse and matter. I admire the writing of the physicist and philosopher Karen Barad, who suggests that discourse and matter are both part of the phenomena of becoming, setting boundaries and limitations, and, conversely, creating possibilities.

From beginning to end, I want my entire process of making and its components—objects, space, discourse, myself and audience—to embody a state of possibilities, the limitless idea of becoming, which I also relate to a feminist and agential realist perspective of understanding the world.  The intra-active relationships I develop in my sculptures are a way to question and challenge boundaries, established knowledge, and notions of the world that are helplessly mediated and hierarchical—allowing for a way to move forward from imbalanced power and value systems. 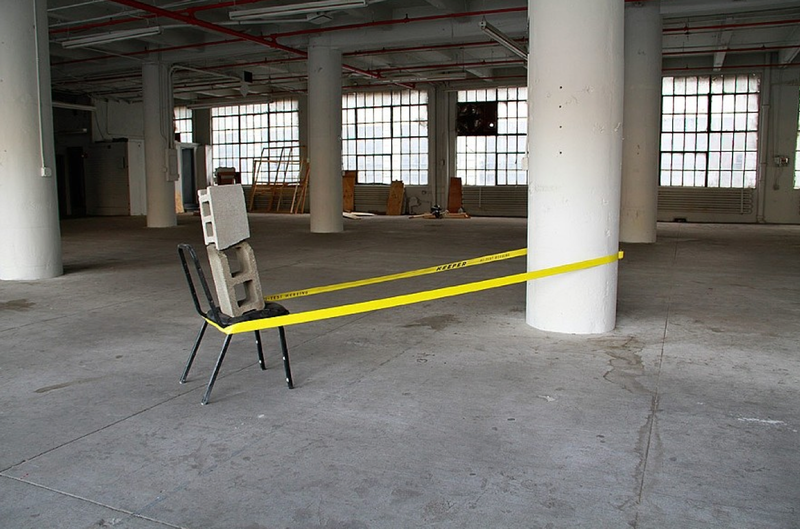 Of Course I Love You, That's Not the Question
Chair, cinder blocks, ratchet strap
2012

OPP: Do you think of your work as emotional metaphors?

KP: My work is coming from the culmination of my conceptual interests, emotional experiences, and unexpected variables in the process of making. I see the emotional layer as a point of access to lead to greater contextual inquisitiveness and consideration.

OPP: Frozen in photographs (as I experience them online), your sculptural arrangements are always “on the verge” of falling over or breaking, but they never do. The potential is forever there, and there is a certainty that they will never fall. They are forever in balance. Are balance and precariousness in essence the same thing?

KP: My experience of making is as much the art as the objects or photographs, even if I am the only person that experiences it, and in this process, I see the precariousness as a shed layer of the balance I seek in the process of making.

The precariousness in my work is what also brings awareness to the balance. I view them as different ways to understand time within the same system. Anything that is in equilibrium is not going to stay that way forever, which makes it vulnerable to imbalance and brings about a concern for when and how that shift will occur. Yet, for every shift in what may seem like an ideal balance comes the opportunity for a new state and new possibilities. 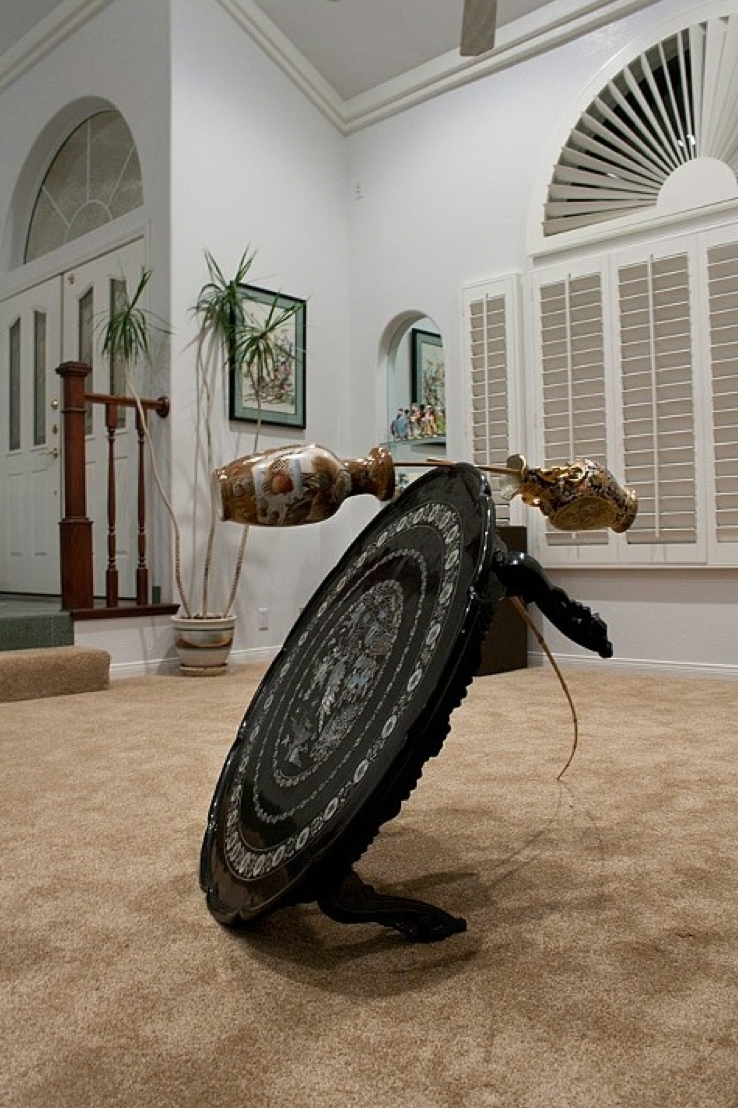 OPP: Do you exhibit photographs of the work in the section On Site? Or are these only available to those that encountered them in the world and on your website?

KP: I exhibit photographs of my site specific works, as well as exhibit site specific pieces themselves for people to encounter (if it is safe). When viewing the sculptures in person, there is a visceral response and a tension between the viewer and the sculpture. The viewer becomes part of the work and his/her agency can affect the entire system and vice versa. In viewing photographs of the work, this anxiety and excitement is suggested, but the actual danger or fear is removed. Yet, the photographs allow access to this particular time and space that would otherwise not be accessible. The sculpture arrives in a state of stasis,  never falling, held in a quiet moment filled with its own paradox. 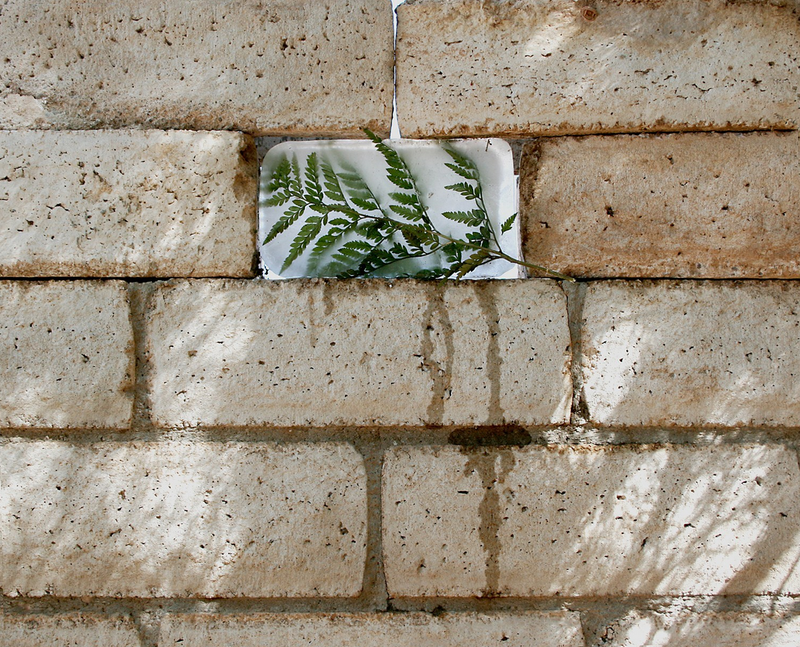 KP: Most of my works begin with a curiosity and awe of a specific object or space. Once I have a place or object in mind, I will go on walks with the intention of just observing the relationships of everything I see. From this I usually find something that inspires my experimentation.

With a tendency to over-analyze and fall into the tediousness of making art, I have found that my most successful works have been made with a sense of humor and self-imposed urgency. When I approach my making as a mischievous and playful act, there is a sincerity, ease and conciseness that emerges in the work—one that is often more diluted in my more premeditated pieces. 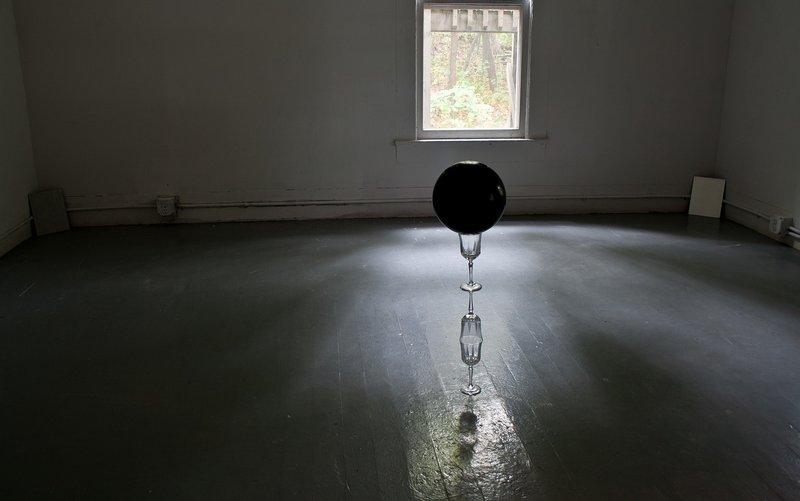 OPP: You must have had some failures in terms of physics. Will you share an anecdote or two about sculptures that failed or sculptures that were extremely frustrating to execute?

KP: Absolutely! I balanced a large sheet of glass on the pointed tip of a small boulder, which in itself was impressive, I must say. I really wanted to balance a bowling ball on top of that balanced sheet of glass. I spent many hours squatting next to it, with one hand on the ball and one hand on the glass. I worked on this for days. It was extremely frustrating at first, but became very meditative and more about my experience rather than an end goal. I never did get it to balance. And I broke the glass when I was cleaning up the materials at the end of a long day.

For another piece, I was collecting large glass vases of various shapes and stacking them on top of each other to create columns.  I managed to balance them to about my own height quite a few times, as I could not leave them stacked in the studio in case footsteps nearby shook the floor. I finally stacked them to about 8 feet, which took a long time and was so quietly stressful. When I left to get my camera, I heard a massive shatter. All of the vases were broken.

Sometimes I experience relief when everything falls apart. At times I feel like I am wrestling with their desires. It can be satisfying to let them go. 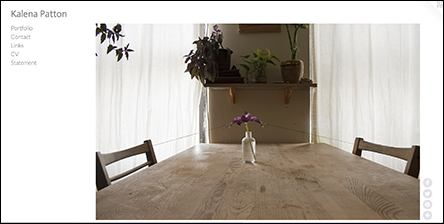