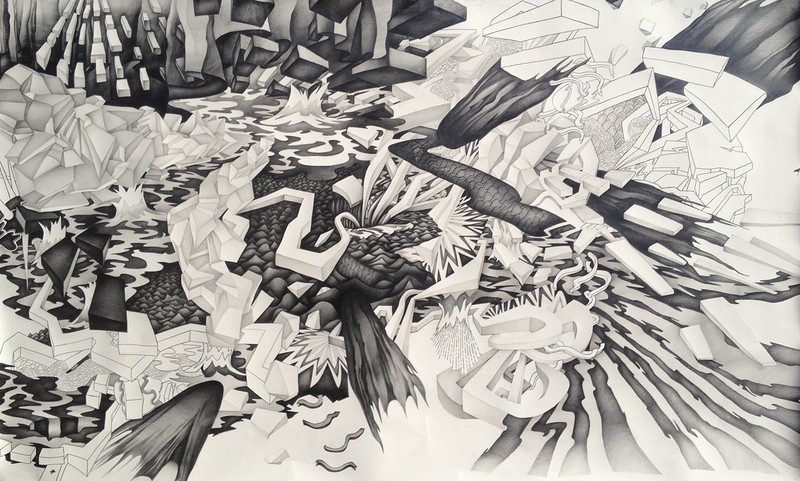 Bay Area artist JUSTIN MARGITICH combines undulating landscapes, the imagined angles of digital space and pure, geometric abstraction in an ongoing conflation of perspective, atmosphere and information. Justin received his BFA from California College of the Arts (2008) and his MFA from San Francisco Art Institute (2013). He is represented by Moskowitz Gallery in Los Angeles and has exhibited widely throughout the Bay Area. His solo exhibition Circuiting (2014) recently closed at City Limits Gallery in Oakland, California. You can see his work until May 28, 2014 in the two-person exhibition Atmospheres: Justin Margitich & Chris Iseri at Moskowitz Gallery in Los Angeles.

Justin Margitich: Silverpoint is a Medieval/Renaissance drawing technique that uses silver or other metals such as gold or copper instead of the graphite that is most common today. Usually the metal comes in a stick or wire form in varying widths and lengths, and you insert it into a stylus of some sort. It functions the same as a pencil but has a much lighter touch and tonal value. It is most often used for underdrawings and sketches. After much experimentation, I decided to use the process in a slightly unorthodox way. I work on wood panel, making many passes and cross-hatches to build up the surface. After a few days, the surface oxidizes and turns slightly yellow. In person, you can see that the oxidization of the silver refracts and absorbs the light in very captivating ways. 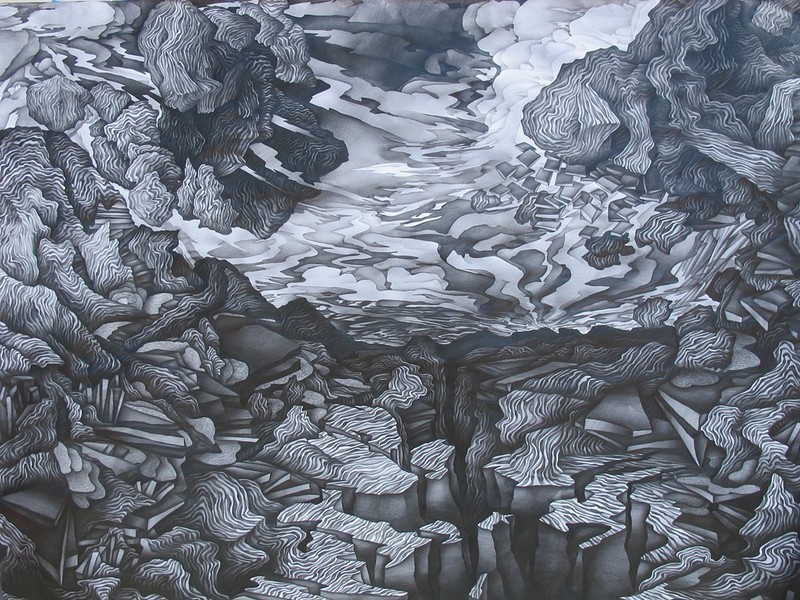 OPP: The quality that is most compelling to me in your landscapes is the ordered chaos of the lines. I can see the presence of the landscape, but most pieces transcend physical space and become metaphoric landscapes for me. They could be internal spaces of struggle and growth. But I also gather from titles like Landscape Cache IV (2014) and Assembling Landscape VIII (2010) that these are conglomerates of many landscapes. What are the inspirations or sources for for these drawings?

JM: Your observations are very apt. I look at a lot of landscape paintings, especially those that were made before art demonstrated a full understanding of perspective. Bruegel and Bosch seem to have a naïve conception of perspective in some of their landscapes. This may or may not be so, but when three or more wonky perspectives are included in one landscape it makes for a disorienting and space-defying world. So when you say they transcend physical space, you are on to something. And yes, they are also like conglomerates. I think of cropping, deleting, cutting and pasting. I use digital or computer jargon to elucidate the themes in the work. I want the viewer to stay and explore. If s/he comes away a little unbalanced or disoriented, then that’s good too.

I sometimes think of the drawings as analogous to early video games: scroll-like, two-dimensional spaces (with some three-dimensional objects) that can be traversed. I am interested in drawing comparisons between the physical and the virtual. Both the physical landscape and virtual spaces are dense with information. I think a lot about the web and digital tech as a facsimile of the natural world and its rhizomatic or decentralized organizing principles. 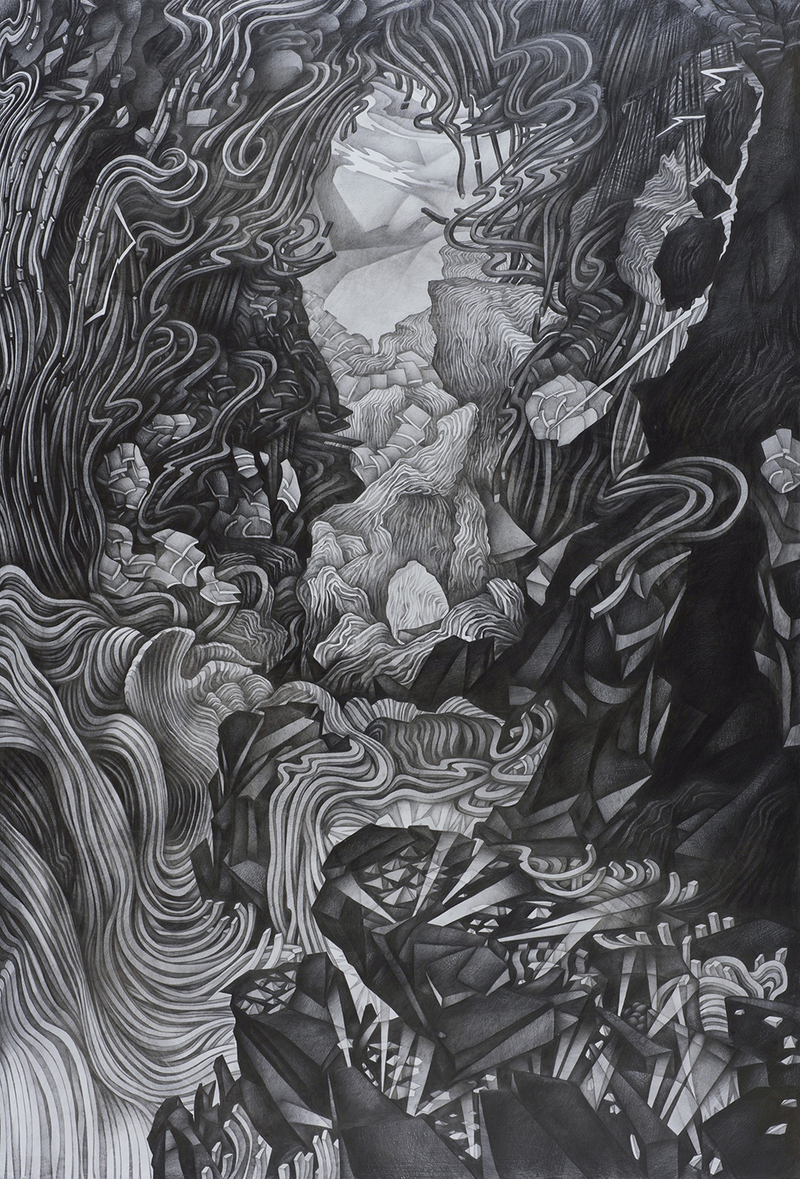 OPP: There appears to be a subtle shift in your compositions around 2010. The soft, undulating lines are supplanted by more angles and straight lines. Can you talk about this change?

JM: The older drawings were not planned out but radiate from a single point and move out organically from there. They are a simulation of the meme-like growth and process of unfolding that takes place in natural systems. The newer, harder-edged drawings are emerge from a mechanized approach: a cut and paste, copy and repeat system. 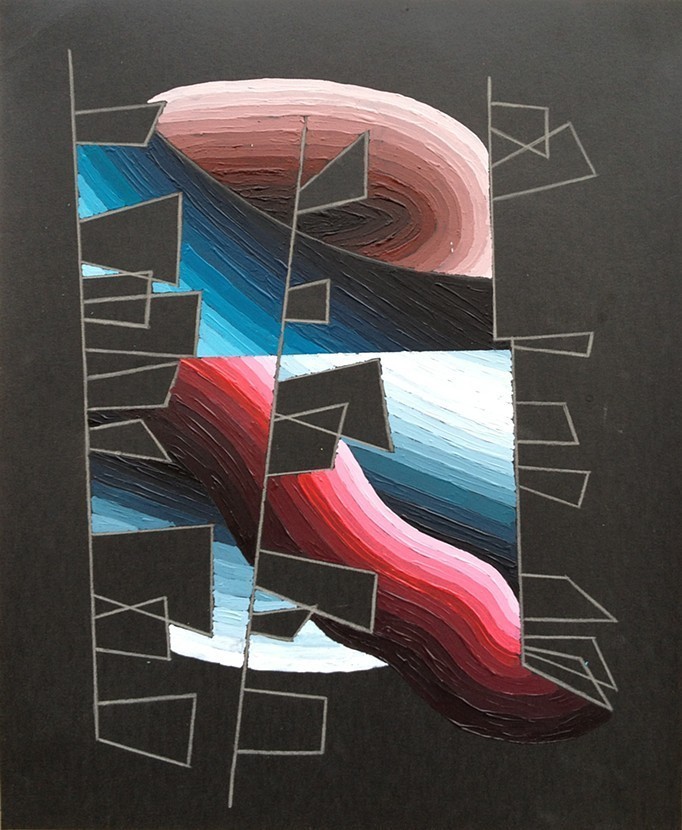 OPP: You just had a solo show of new paintings at City Limits Gallery in Oakland. The work in Circuiting represents a new direction for you. Tell us about the show. How did the new work grow out of the older work?

JM: Yes, the newer paintings are quite different from the previous work, but they are connected. The small paintings are on black sandpaper. When I was sharpening the metal silverpoint tools on the sandpaper, I found that the various metals rubbed off as subtle colors. The effect was different than when these tools were used as intended. This discovery was a starting point for what eventually developed into a full body of work. The idea of a circuit is a play on the metal point, as a sort of conductor of energy or electricity. I tried to mirror this with the electric and chromatic colors. I see these paintings as individual icons or pictograms that could be communicative. Each one is like a prototype of language without phonetic words, like a glyph with multiple meanings and interpretations.

Since the drawings usually contain a whole bunch of dense information, I do use the same images over and over. The best example I can think of would be from Landscape Cache II. There is a large rectangular and empty shape on the middle right. I lifted this section and singled it out as a new drawing called Cached Landscape. I am planning on doing a series based on this idea. The crowded objects from the dense landscapes will be stripped away and one central object will be the focus. 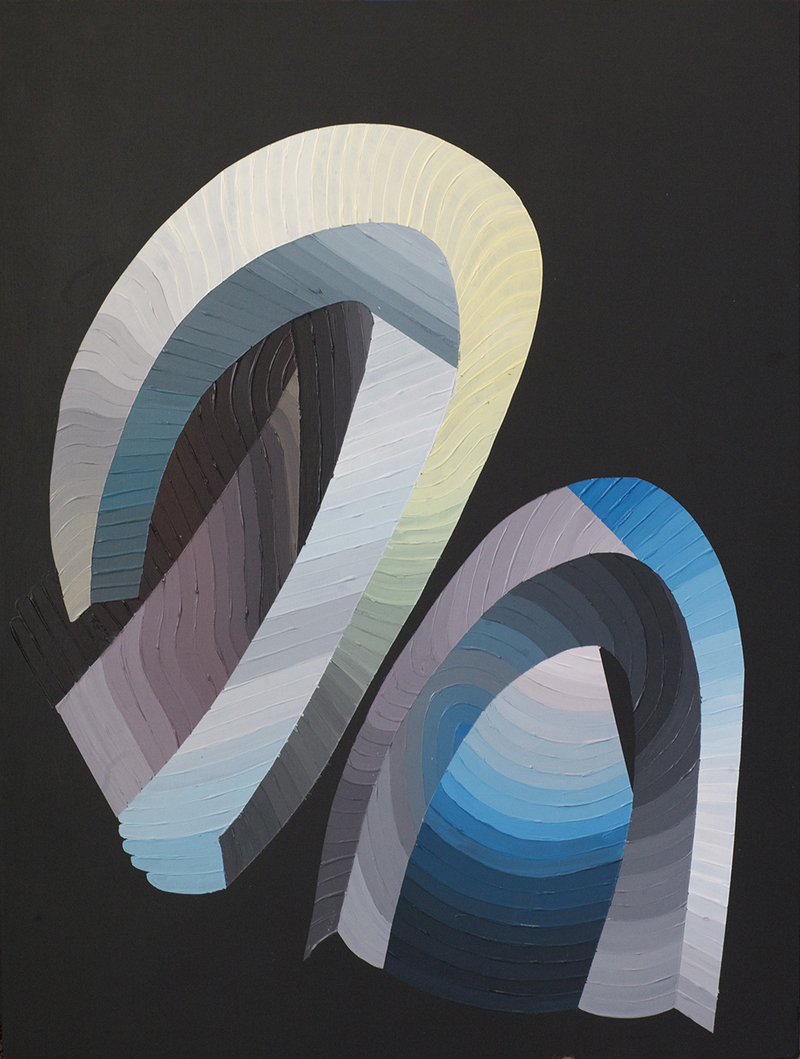 OPP: I've noticed that I get a little depressed right after a big solo exhibition closes. It only lasts a little while. I've learned to expect it and channel my energies away from my studio for a temporary period of time until I'm recharged. It feels a little like taking an extended, metaphoric nap. Do you experience this downswing? If so, what do you do to deal with it?

JM: Especially after two shows, that comes on. At the same time as the City Limits show in Oakland, I also had a show of newer drawings at Moskowitz Gallery in Los Angeles. Every time I have felt this downswing—after a show or just after making sub-par work—a new and totally unexpected way of thinking or working arose. I probably should take a break, but I usually don't.  Just by keeping up production, I eventually fall back into making satisfying work again. It is a good opportunity to evaluate the work done for the show and, depending on that evaluation, either begin a new body of work or continue to flesh out the working idea. I see the Circuiting series as complete. Now that the exhibition is over, I am slightly altering the process and media. I'm keeping the fundamental idea but slowly adding two or three new themes. I have found that this process, after many failures on the way, usually leads to a new working method that I can keep until I have made a sufficient amount of new work. 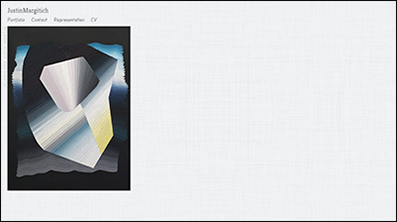