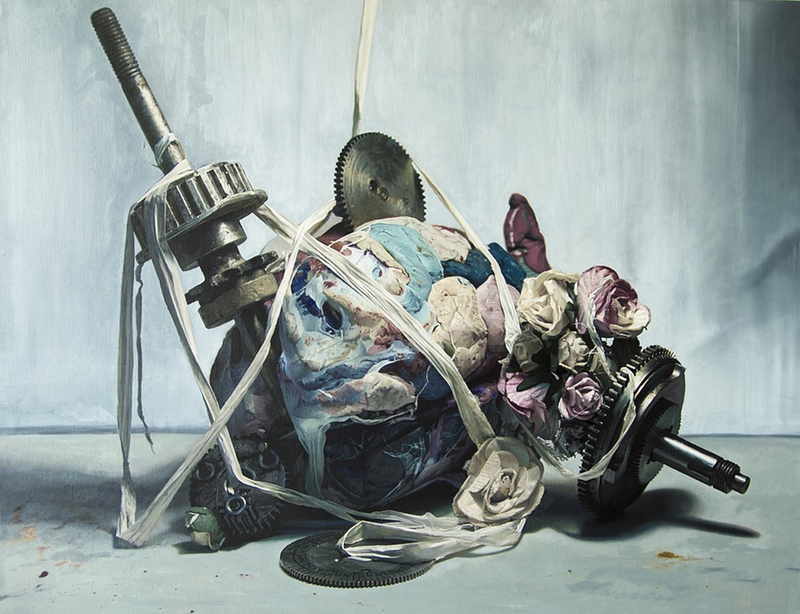 JONNY GREEN’s meticulously-rendered paintings of slapdash sculptures merge still life and portraiture. The crude, tiny objects—built from plasticine, ribbons, electrical tape, screws and mismatched clock parts—further his exploration of the human experience of smallness in the face of disaster, loss and uncertainty by portraying these flawed creations with unabashed dignity. Jonny earned his B.A. from Norwich School of Art in 1989 and his M.A. from Royal College of Art in 1991. He has exhibited widely throughout the United Kingdom. Most recently, his work was included in the juried exhibition Contemporary Visions V (2015) at Beers Contemporary and in Saatchi’s  New  Sensations  and  The  Future  Can  Wait (2014) at Victoria  House in  London. In 2013, Jonny was shortlisted for the prestigious Threadneedle Prize. You can see his work until May 8, 2015 in Still Life: Ambiguous Practices, curated by Frances Woodley, at the Aberystwyth University Galleries in Wales. His work will also be included in Distorted Vision, the inaugural exhibition at The Dot Project in London, where Jonny lives and works.

OtherPeoplesPixels: Past works have focused on disaster scenes, masquerading as landscape and influenced by famous paintings from art history. Carpark of Earthly Delights (2012), for example, references Hieronymus Bosch's masterwork from the 15th century, and many works are reminiscent of Albert Bierstadt, not just Dead Lake (After Bierstadt) (2012). Are these natural or man-made disasters?

Jonny Green: Both. That series of works began in 2008, right after the big financial crash. My studio at the time faced onto Canary Wharf, one of London's financial centers. I was listening to the news reports of the panic and looking out onto the bank buildings. That particular atmosphere of shock and fear are what triggered and informed those paintings. I started looking at the apocalyptic works of people like John Martin with their strong sense of human smallness, something his work shares with the Hudson River Group, particularly Bierstadt. What interested me in particular was the notion that the whole thing was a fabrication, Bierstadt's visions of the Rockies are exaggerated and romanticized in order to instill awe in the audience. It's very Hollywood. So in my paintings of that period, people are reverting to primitive states within these apocalyptic environments, making peace with their gods, seeking absolution or having sex. 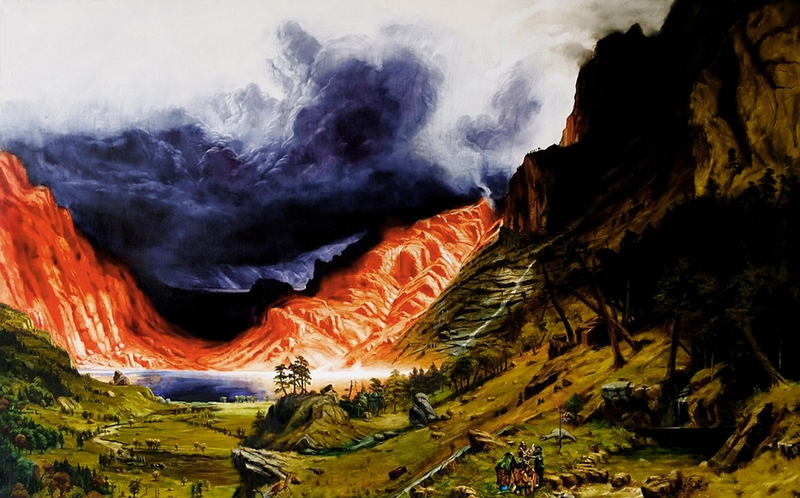 OPP: The Oil Cloud Series (2012-2013) isolates the colored smoke/clouds from the disaster landscapes. You give the amorphous forms personality by giving them human names, referring to the convention of naming hurricanes. Beryl and Alberto, both hurricanes from 2012, even have eyes, further supporting the personification of natural disasters. What else can you tell us about your intentions with this series?

JG: This series is an ongoing one actually. I've recently made a couple more of them. I'd been looking at a lot of archival photographs of early ecological and industrial disasters. I found a series of daguerreotypes of fires in early oil fields and began to use them as a very loose source material for that group of paintings.

At the same time I’d been researching the convention of attaching human names to hurricanes, which has its beginnings in the Caribbean hundreds of years ago. Storms were initially named after the saint of the day the hurricane occurred on from Roman Catholic Liturgical calendar. I felt that it was a symptom of our need as humans to anthropomorphize the things that we don't understand or that frighten us. We have a habit of seeing faces or consciousness in almost anything. It's an evolutionary throwback that’s still pertinent to our survival. 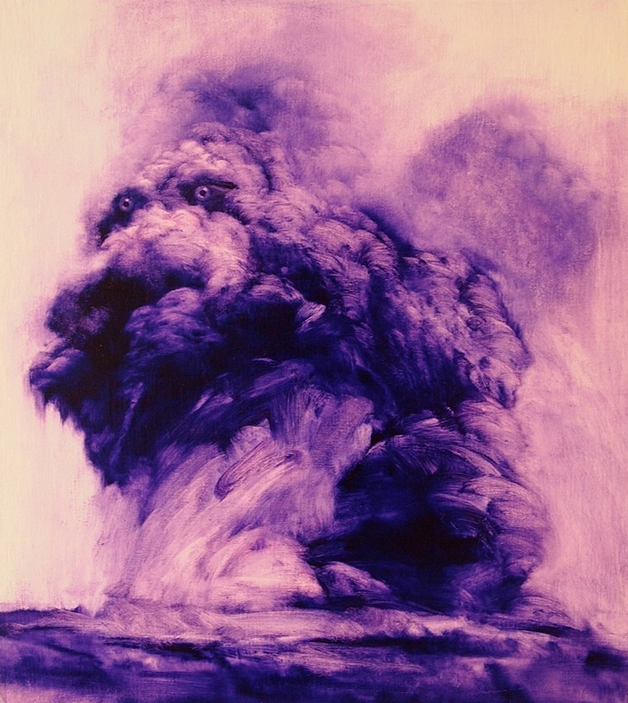 OPP: Now let's turn to your most recent paintings of haphazardly-made sculptures. These are part portrait, part still life. What led to this shift in your work?

JG: I'd had to take a break from the painting studio for family reasons and leave London for a few weeks. I was staying with my  family in Yorkshire in the North east of England. Unable to paint, I found a box of filthy old plasticine from my childhood and began modeling with it late at night when everyone else had gone to bed. I then photographed these weird little objects, using the materials available to me, i.e. kitchen towels as a backdrop, an old lamp as the only lighting. I was surprised by the power of the images and decided to try and make paintings from them on my return. I think the reason they worked is that I have absolutely no personal investment in sculpture as a practice, which allowed me to be completely free and open with their construction in a way that is perhaps impossible for me with painting.

I really just free-associate and slap things together. Their flaws and lack of artistry are what makes them interesting to me. This is completely at odds with the process of photographing and painting them, which is really painstaking. I think every artist is looking for a process for making their work that suits their temperament. It's a surprisingly difficult thing to find, but this combination of carefree and painstaking works for me. 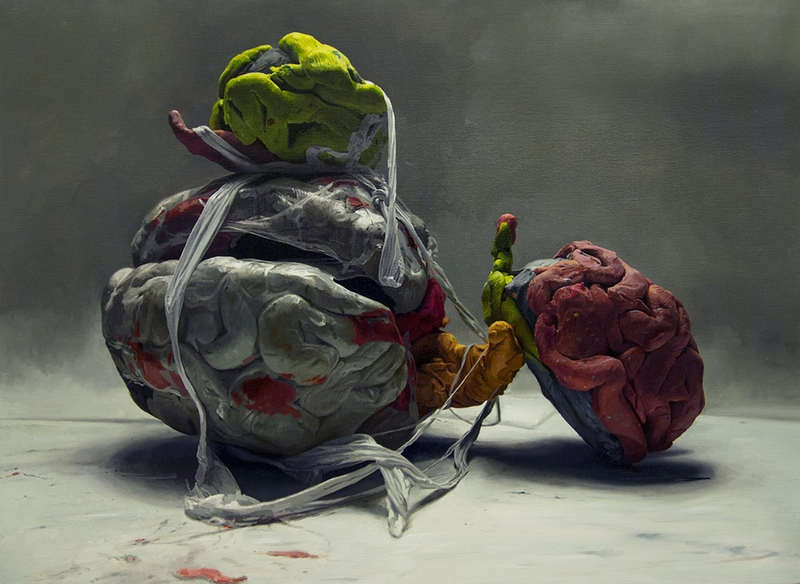 OPP: The tendency to anthropomorphize and our neurologically-wired habit of seeing faces is of course also at play in this body of work. All this has got me thinking about the human brain, which is a recurring motif in the sculpture paintings. How do you think about the brains in pieces like Tipping Point (2014) and Fracaso (2013)?

JG: I think about the brains as characters just like the sculptures that are more suggestive of human beings. A couple of years back I'd gone to visit my father in hospital. He had pneumonia and was also being treated for a particularly aggressive water infection. Although temporary, the change in his behaviour was dramatic. His memory had gone, and he had lost all sense of time and place. He was extremely confused. On speaking to the doctors, we found out that the infection was the cause of this. It was bewildering to me at the time that something so minor as a urine infection could cause such a change in personality, and I began to investigate the condition. I began thinking about the brain as this fragile, sensitive jelly-like entity, that contains everything about a person. The rest is just dressing.

OPP: Have you ever considered exhibiting the sculptures themselves?

JG: Not so far, but I wouldn't rule it out for the future. I don't think they work as they are largely because I work on them from one angle. I’m looking for an image to paint so I rarely consider what the back, top or bottom looks like. It might be quite interesting to play with the scale of them, to make them human-sized for instance, which would be quite a challenge technically as most of them are only a couple of inches tall. 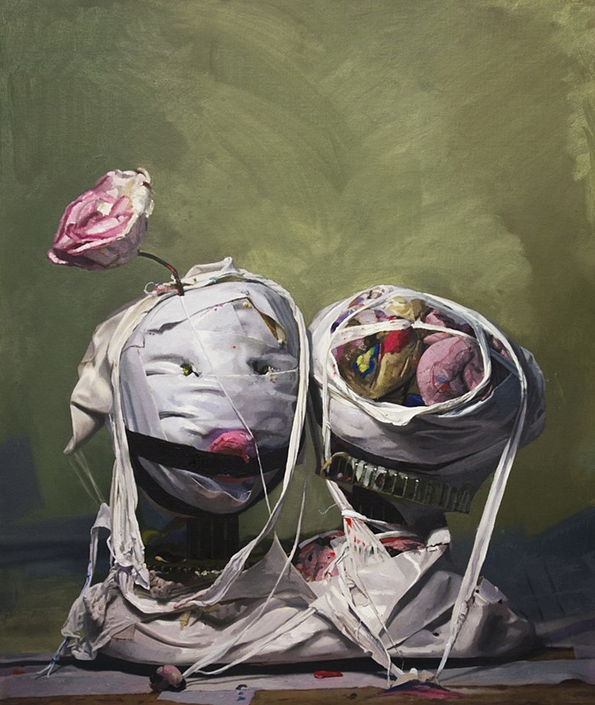 White Wedding
2015
Oil on canvas on board

JG: Making choices about scale is largely intuitive. Sometimes I get it wrong the first time around. For example, The Rt Hon started off as one of the really small paintings. When it was complete, I realized that it didn't resonate the way I'd hoped and needed to be substantially bigger.

There is something about the nature of little objects—their abject and pathetic demeanor, the fact that they appear to be trying to validate their existence with flowers and the draping of ribbons—that drives me to give them a voice, assert their rights. I’m aware that there is something ridiculous about the notion of asserting human rights for a lump of dirty old plasticine, but it's that anthropomorphism that makes them more than bits of old rubbish. 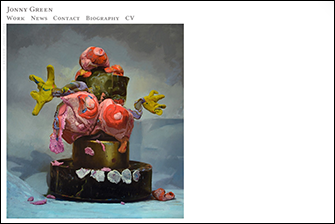