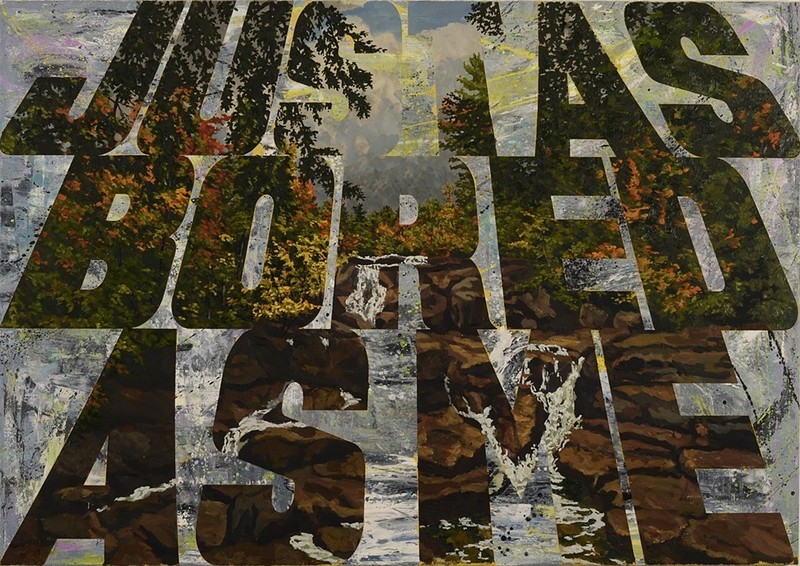 The stenciled text—most often rock music lyrics—in JOE WARDWELL's paintings alternatingly reads as aphorism, advertising, proverb, propaganda and cliché. Combining landscape painting and abstraction, he poetically echoes a persistent human struggle with longing and impermanence in the visual confusion between foreground and background. Joe earned a BA in Art History and a BFA in Painting from the University of Washington (Seattle) in 1996 and his MFA in Painting from Boston University in 1999. Boston-based LaMontagne Gallery, where he has had three solo exhibitions there—Die Young (2009), Big Disgrace (2012) and Party Over (2014)—will take his work to Pulse Miami in December 2015. Joe will have two upcoming solo exhibitions in 2015: at Heskin Contemporary in New York City and Giampietro Gallery in New Haven, Connecticut. Joe is an Assistant Professor of Painting and Drawing at Brandeis University in Waltham, Massachssettes where he lives.

OtherPeoplesPixels: Rock music has been a strong inspiration in your work for at least the last decade. What do you listen to while you work? Do you tend to listen to the same albums over and over again?

Joe Wardwell: I listen to music from all sorts of genres, from country swing to Norwegian Death Metal. While working, I listen less as source material for the individual pieces but more for the overall feel of the work and to get me into the right mental space to create the work in the first place. Most of that albums that get repeated are from my vinyl collection: Neil Young’s Live Rust and Boris with Merzbow’s Rock Dreams and Lightning Bolt’s Wonderful Rainbow. I tend to binge a bit more on digital music. Sometimes I will spend an entire day just listening to the Melvins, the Flaming Lips, Black Sabbath or Boris. 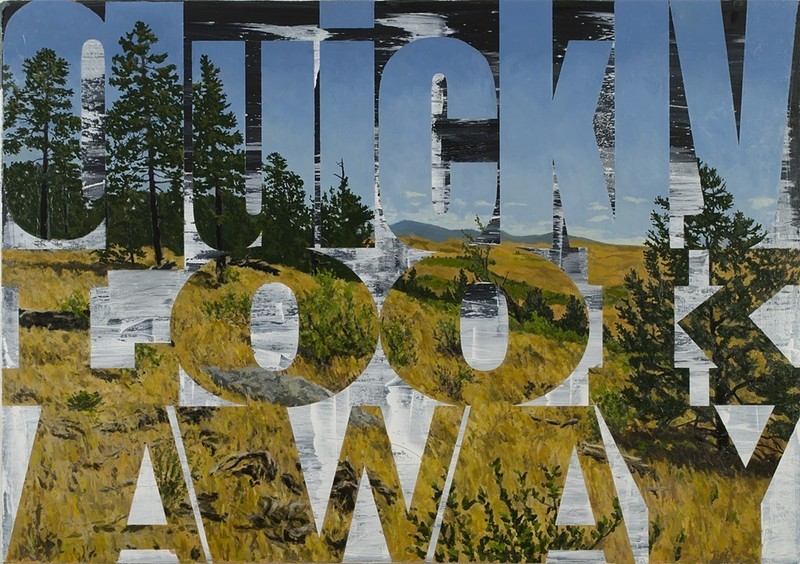 OPP: What is the relationship between rock music and landscape painting, as you see it?

JW: Landscape painting represents an American ideological orientation to wilderness and landscape that embodies a lot of similar yearnings, desires and attitudes I see expressed in rock music. There is something in that shared psyche that I am trying to tap into and tweak. But I am not solely looking for comparisons between the two or necessarily even looking to unify the painting from genre to concept to form. I see painting as a container that I am trying to fill up with many ideas and images that are struggling to get out.

OPP: Early paintings like Masters of My Reality, Oblivion and Power Cord Serenade, all 2005, portray musicians and their entourages as heavenly flights of angels reclining on clouds. Others from 2004, such as Live Free Bird or Die, visually position the guitar as a portal through which we can enter another reality. But in 2007, you first introduced text, more specifically rock lyrics, into your paintings. What led to this development and how did it grow out of the earlier work?

JW: In 2007, I felt like I was on a gerbil wheel with the work, running round and round. It was too tongue and cheek and ultimately limited my expression. I didn’t see the heavenly rock figures going anywhere. The text and landscape combo has allowed me to be flippant, ironic, sentimental and political with the work. The work is a lot more versatile as a mode of expression for me now.

If you look at one of those earlier pieces and compare it to one of the first text and landscape pieces like Look West (2007), all of the same connections are still there though the representative form appears very different. The abstract, high chroma flames become the stylized text. The text is taken from song lyrics, and the fonts are derived from silkscreen rock posters. The heavenly cloudscapes are replaced with an idealized wilderness landscape, and the figures in the cloud still exist within the prepositions of the text. The implied Me, You, We or I in the text functions as the figure in the landscape. 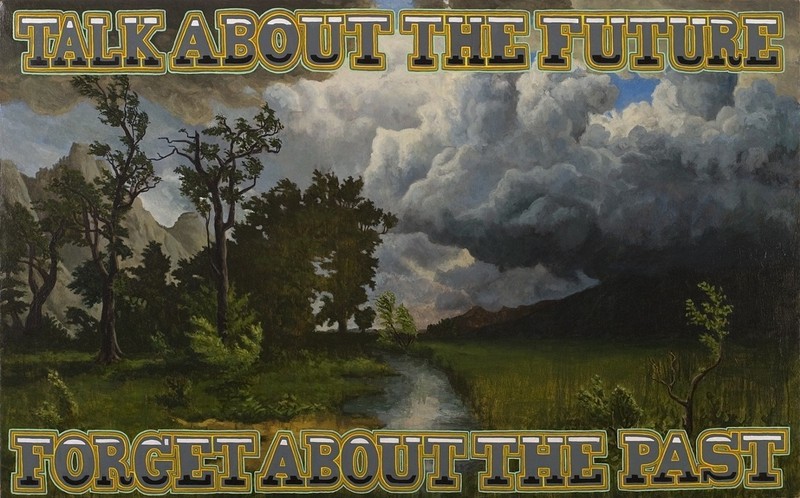 OPP: More recently, the text has begun to completely take over the landscapes. Can you talk about this change formally and conceptually?

JW: Yes, earlier it was too polite. I still love those first paintings and stand by them, however it does seem to me now as if the text is too apologetic in its presence in the painting. It functions too much like an advertisement: first draw them in with beautiful landscape, then sneak in the message. I like the one to one relationship that occurs now.

Each painting has a stage in the process when it is a complete abstract painting and a complete landscape painting. Sometimes I paint the landscape first and sometimes I paint the abstraction first. However the painting starts, I work it until I wouldn’t paint over either the landscape or the abstract painting, and that’s how I know it is ready for the text stencil. It is a painfully destructive process but one that I feel imbues the paintings with a lot of energy. I love having these competing elements battle it out within the confines of the rectangle.

OPP: After recognizing some of the lyrics—like "And this bird you'll never change" from Free Bird, "a man and his will to survive" from Eye of the Tiger and "clowns to the left" from Stuck in the Middle with You—I unintentionally began to play a game as I viewed the work on your website. My initial experience as I looked at each of the text paintings became about trying to name that tune before I began to think about the relationship between the text and the image. I wonder if this is a common experience with your work . . . has anyone told you that? Is this kind of response a problem or an asset?

JW: In short, yes, yes, and yes and no. I have heard that a lot, and it was certainly more common with the first paintings. Most of the lyrics I first chose were easily discernible to the reasonably musically inclined. I think that gave my audience a way into the work. As the paintings evolved, they tended to be more obscure and less obviously from a single source. My reliance on the music as source entry point into the work has faded. The lyric source for Choose Not To (2013), a mural at Rag and Bone in New York City, is taken from the punk band NoMeansNo. Nothing to Win, Nowhere to Go (2011), currently on view at Northeastern University, takes text from Ad Reinhardt’s writings about his black paintings.

In the beginning, I enjoyed it when people could recognize the songs, but now I don’t care as much. I feel confident that the recognition of the songs is no longer the central way an audience approaches the work, and I enjoy the greater freedom that provides. Lastly, I would add that often I am drawn to lyrics that evoke a visual sense that can’t really be felt in the music that they originate from, such as the pieces Untied We Stand (2011), Mankind is Unkind Man (2011) and Free to Be Evil, Free to Believe (2014). 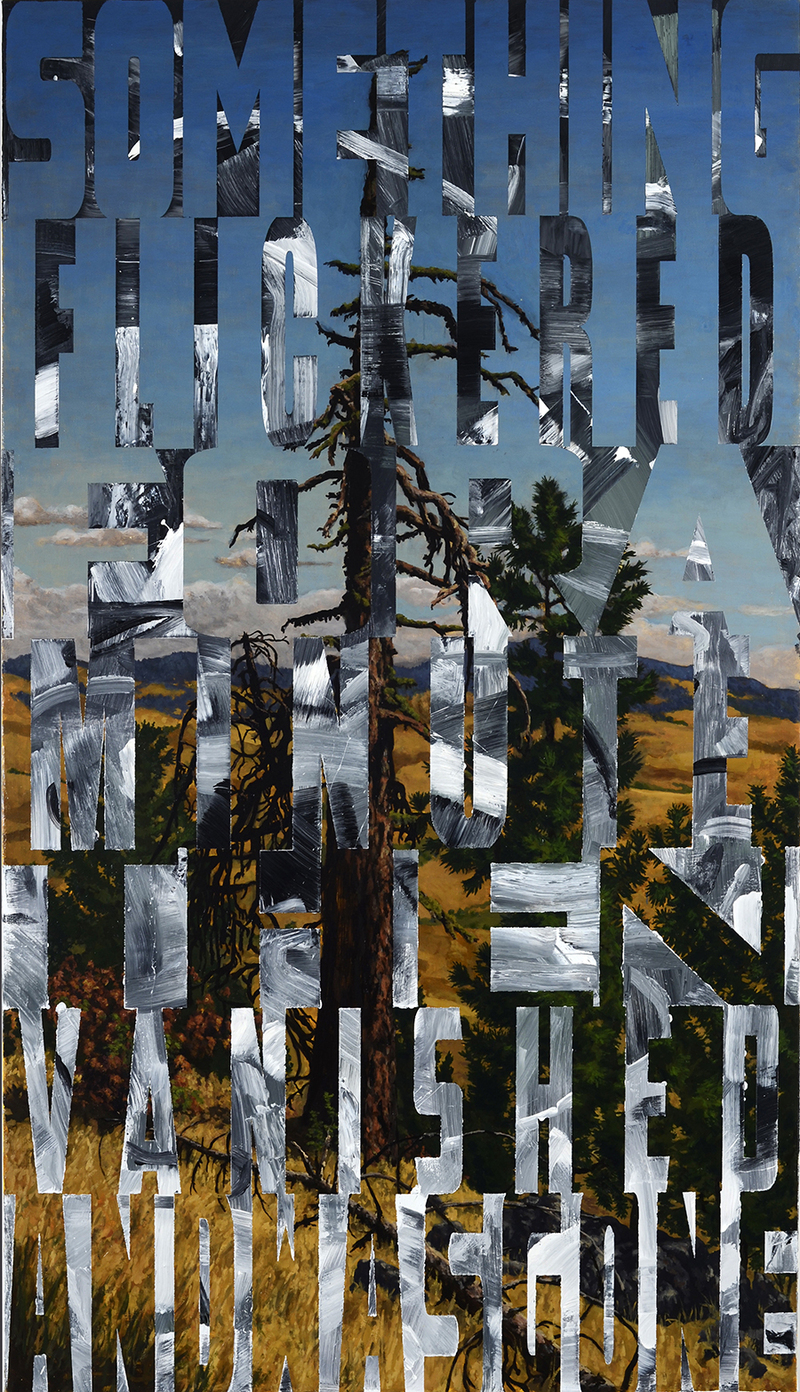 OPP: Because they are presented out of context, the lyrics in your work sometimes read as ironic. Other times they have the ring of profound wisdom. Could you talk about lyrics as aphorism, as proverb, as spiritual teaching or as cliché . . . whatever most interests you?

JW: I certainly try not to be preachy, and a lot of what you describe really depends on the mood I am in and the mood of the piece. I want the work to be flexible and not easily pigeonholed. I am often very upset about the political situation and environmental degradation in this country, and that can drive the landscape and text in a piece. Other times, I feel impish, ironic and silly and make a piece that is quick and off-the-cuff to counterbalance the more serious pieces. Then there are other paintings that are more sentimental. A Big Commercial and On and On and On and On are heart-felt responses to the death of Beastie Boy Adam Yauch. Similarly, the recent painting Something Flickered for a Minute Then Vanished and was Gone (2014) connects both to my interest in environmental awareness and is a homage to the recently deceased Lou Reed.

In all the work, I try and convey an almost subliminal counter-culture, propaganda-like attitude. Through the use of the text, I tap into and twist the collective psyche I describe above. . . like chaotic advertising exposing our dystopia. I am deeply inspired by the painter Leon Golub. Much like him, I think of my paintings as warriors that set off into the world to change it one person at a time, slowly seeping into the minds of the viewers and irrevocably altering them. 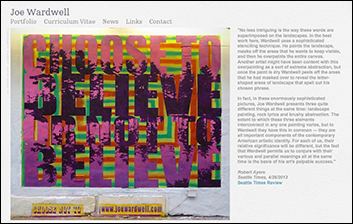