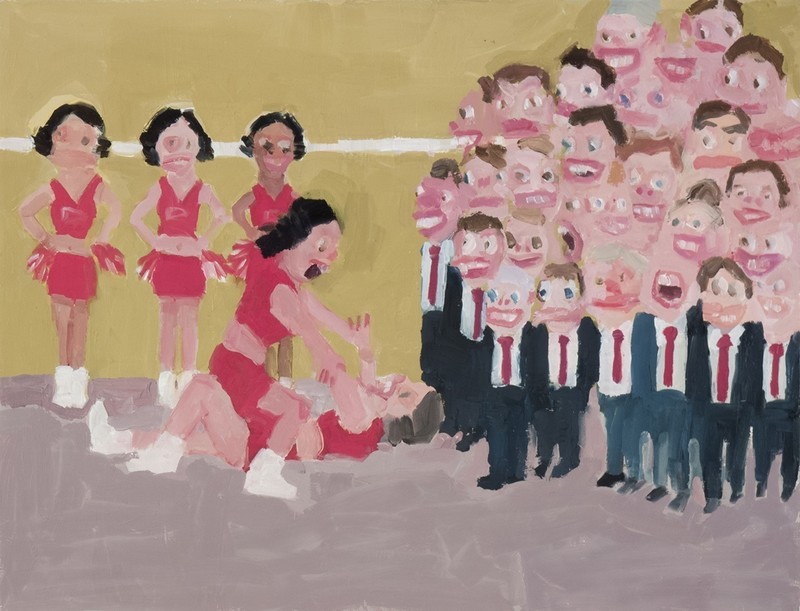 JENNIE OTTINGER's paintings explore power dynamics, hive mind and social belonging. Uniforms—both official and casual—indicate group belonging, while the faces of her figures point to the complex emotional experience that belonging entails. Their expressions range from stunned to disgusted, pleased to anxious, dumbly triumphant to horrified and grotesque. After earning a BA (1994) at University of the Pacific and a BFA (2000) at California College of the Arts, Jennie went on to earn her MFA at Mills College in 2008. Recent solo exhibitions include Spoilers (2016) at Conduit Gallery (Dallas, Texas) and Letters to the Predator (2015) at Johansson Projects (Oakland, California). Rabble Rousers (2017), a two-person show with Megan Reed, closed recently at Johansson Projects. Jennie is a 2017-18 Affiliate Artist at Headlands Center for the Arts, which will host an Open House on October 15, 2017 (12-5). She lives and works in San Francisco, California.

OtherPeoplesPixels: What are the major themes in your paintings of cheerleaders, clubs and secret societies?

Jennie Ottinger: I’m interested in that complexity and ambiguity of power dynamics. Each of us expresses power in the ways available to us and I try to depict some of these in my paintings. I’m also interested in the role clubs and organizations play in our society. We develop rituals and indicators to signify belonging. Where do we each belong and what is expected of us? 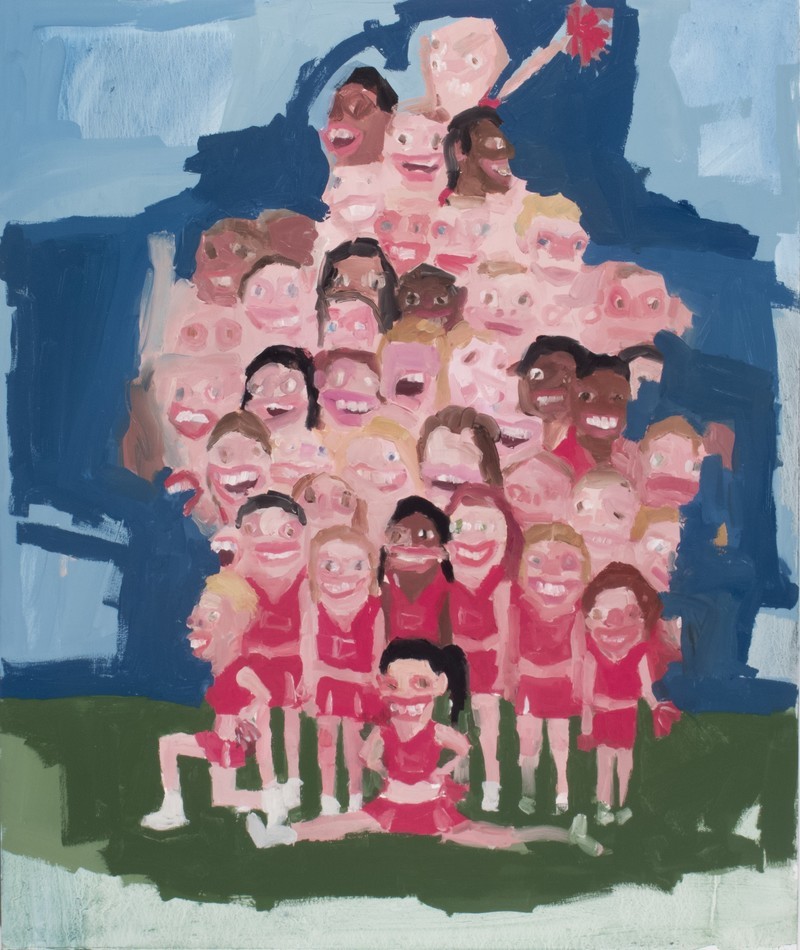 OPP: The faces are all pretty equally grotesque. At some moments, these figures and the power dynamics they seem to stand for, are horrifying and I feel Schadenfreude at their suffering. Then, a second later, I feel pity and sadness for those cheerleaders and bros in neckties cause they are so desperate and trying so hard. Tell us why you paint the faces the way you do.

JO: I’m glad you experience that fluidity of reaction to the subjects. I love the variety of human faces and even though the ones I paint all look the same in a lot of ways, it demonstrates how with the slightest differences, people look different and expressions change. And when there is so much similar, you do notice the small differences between individuals. I guess it addresses that intersection of individuals and groups which is always on my mind.

I use uniforms (both formal—cheerleaders and causal—preppy) as short hand to signal a certain type. I like to play with the baggage that those preconceptions bring to the story. Preppy boys mean different things to different people, and it might be very different than how you feel about that one preppy boy you know personally. It’s like that “some of my best friends are (fill in the blank)” phenomenon.  We can separate how we feel about a whole group from how we feel about one member of that group. 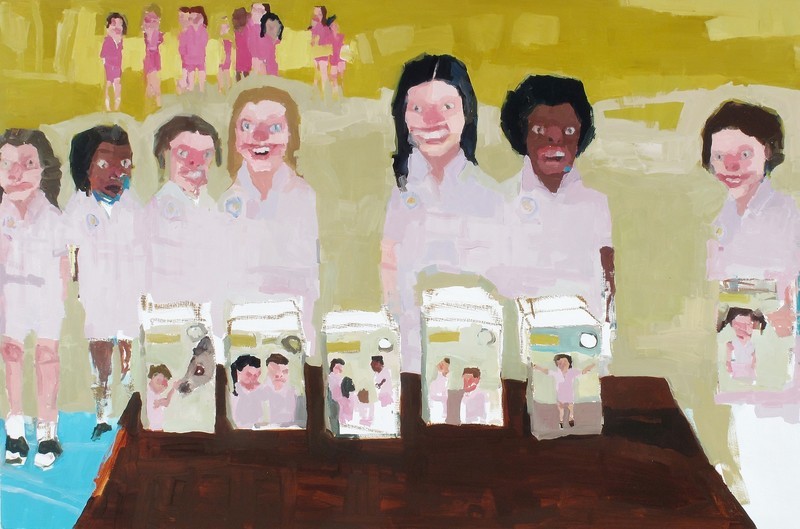 OPP: Are you laughing at or empathizing with the figures you paint?

JO: Maybe a little of both. I use humor as a way to talk about issues I’m interested in. I present them as if I’m laughing at them but try to leave hints that I take their situation seriously. This ambiguity again is why I’m so interested in cheerleaders and sororities. Both are considered frivolous in certain circles. But though there is a case that they are outdated, they both relied on the relative feminists of their times.

On the one hand cheerleaders traditionally exists for the benefit of men—to help the men succeed in their endeavor—but cheerleaders have evolved to be mostly women and girls because at one time, only men and boys could participate in sports. Before Title IX, there wasn’t much girls could do in the way of extracurricular sports, so they flocked to cheerleading. It has further evolved into something that stands on its own. Cheerleaders are amazing and tough athletes who are not valued as much as they should be in the culture—or would be if they were men, I suspect. In fact, pop culture narrows them down to a few different types creating an almost virgin/whore dichotomy of the mean girl or the wholesome over-achiever.

Full disclosure, I tried out for my freshman cheerleading team but didn’t make it. I think you should know that. I was, however, in a sorority and although I do totally understand the criticisms of sororities, women started them because they weren’t allowed into the secret organizations that men were members of. After three years as a member, I still don’t understand exactly why they exist, but if fraternities exist, it seems feminist to start a club for women. And, for what it’s worth, I loved my time there. 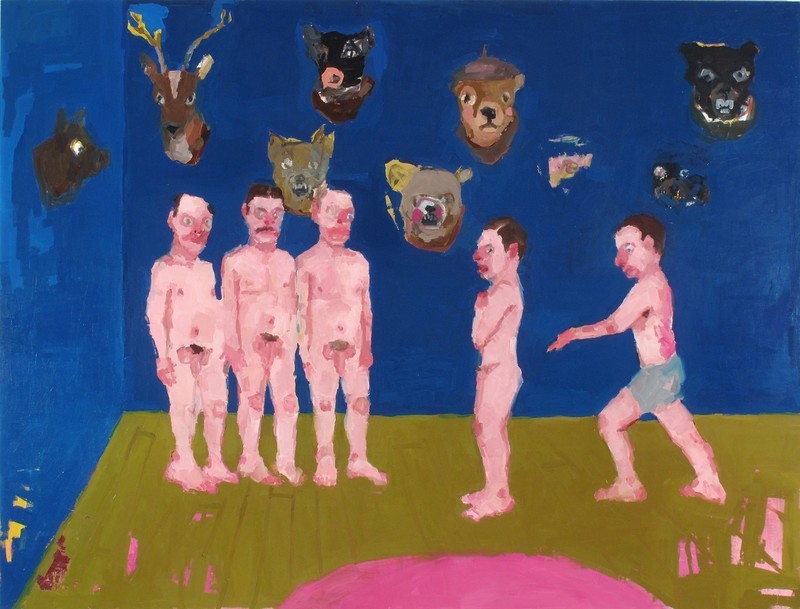 OPP: Many of your recent paintings refer to fictional stories, both novels and movies. What's your relationship to stories in general?

JO: I love books and almost always read fiction. A while ago I started to panic because there were so many books I wanted to read, but I felt like I would never get to them. So I started Read the Classics, a series where I painted new covers for books that were considered classics or modern classics and wrote summaries so that if you didn’t have the time or attention span for say Moby Dick, you could just read my summaries. They won’t get you through even a middle school class but they will get you through a cocktail party conversation. Which also ties into the themes of being in the club or not.

I learned a lot from this project (which is ongoing as I still do commissions of these). As you can guess, whenever you look at the western cannon of anything, it is obvious how white it is and to a lesser degree how male dominated the list is. It led me to seek out classics by women and people of color, and I read several amazing books I wouldn’t have gotten to. It also made me notice the way women were portrayed and their ultimate fates in the novels by men over the centuries. 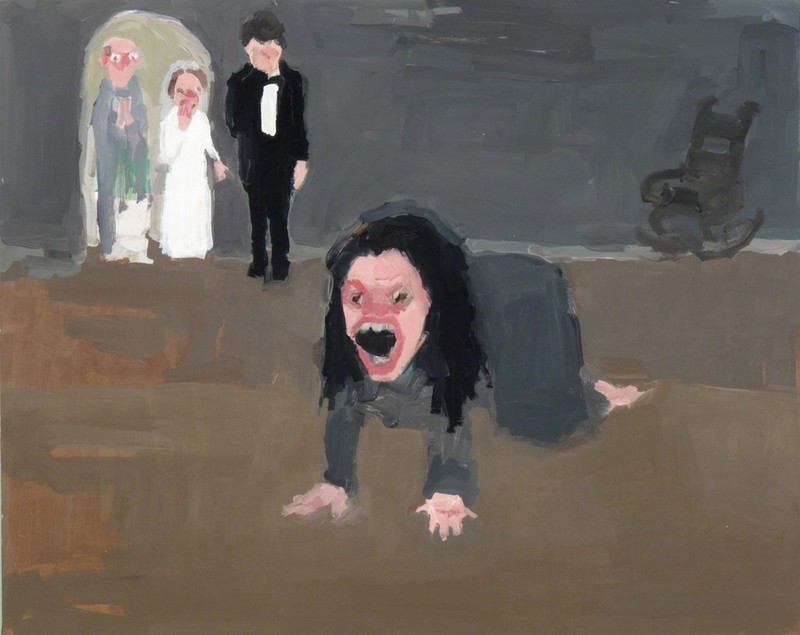 OPP: What about the Spoiler paintings? I love the reframing of the classics through the lens of contemporary television.

JO: I was looking to see if I could notice any patterns in the plots of classic novels and one thing that stood out was that many of them end either happily with a wedding or tragically with the female protagonist dying in torment. I made the Spoiler paintings as a way to take the summaries to the next level and just telling the viewer how the book ends. I also always think it’s funny when you get a book and the cover is so vague and has nothing to do with the actual story, but then the jacket summary gives the whole plot away. 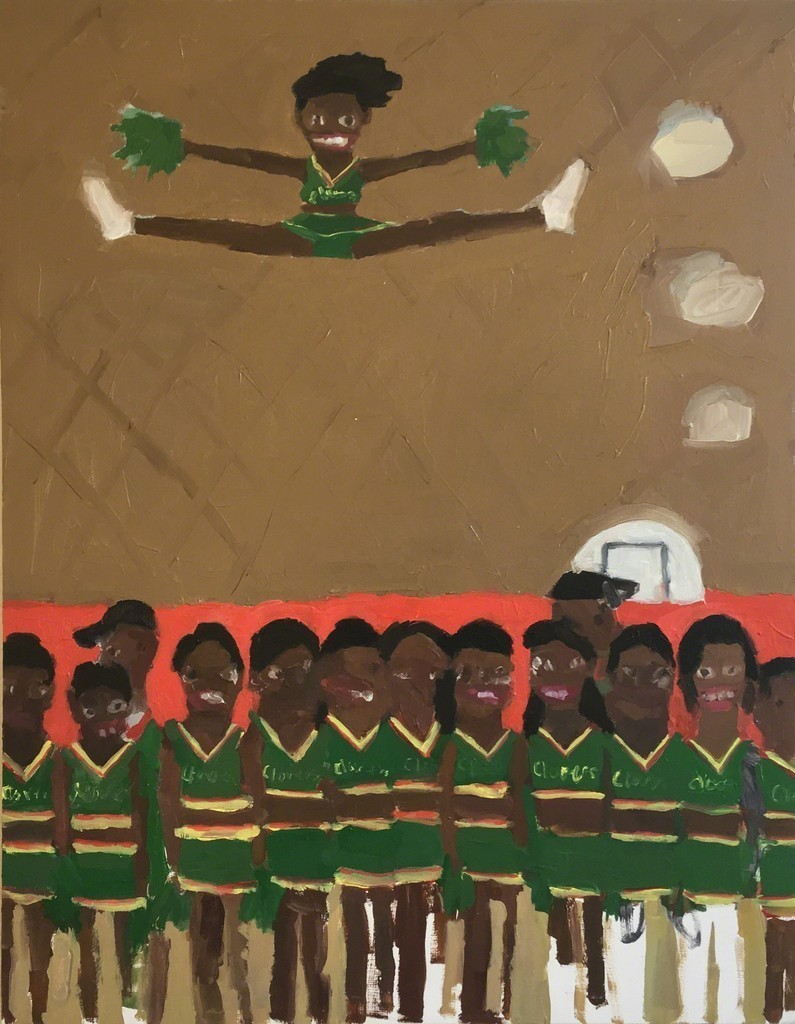 OPP: What do texts like Bring it On have in common with Jane Austen, Anna Karenina and Jane Eyre?

JO: I love Bring It On because it is dealing with serious issues in the guise of a silly cheerleading movie. It doesn’t try too hard to broadcast that it is dealing with profound social issues like cultural appropriation, race and feminism. Jane Austen is similar in the way that she is interested in class and feminism but conceals these issues in a pretty, pleasant, intimate story. It’s interesting to me when something seems frivolous, but you discover it’s actually profound instead of just assuming something’s profound because that’s the way it’s presented.

I also see Bring It On as one of the very few films that presents cheerleaders as actual human beings. Anna Karenina and Jane Eyre, as different as they are from Bring It On's Torrance and from each other, were all treated a certain way because of who people thought they were from surface judgements. As I was saying in the earlier answer, I like to use stereotypes to challenge the viewer to reassess what biases come up for them. It might be easier to admit to ourselves that we're a little dismissive of cheerleaders than it is to admit we might also be a little dismissive of a marginalized group in society.

OPP: What are you working on right now in your studio? Any new directions?

JO: I’m still working on cheerleading and sororities. I’m planning on sewing some cheerleader uniforms and want to include a performative element mainly so people will have to let me do their hair and makeup. 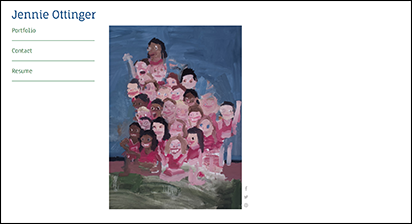 
Featured Artist Interviews are conducted by Chicago-based artist Stacia Yeapanis. When she’s not writing for OPP, Stacia explores the relationship between repetition, desire and impermanence in cross-stitch embroideries, remix video, collage and impermanent installations. She is an Adjunct Assistant Professor in the Department of Fiber and Material Studies at The School of the Art Institute of Chicago, where received her MFA in 2006, and was a 2011-2012 Artist-in-Residence at BOLT in Chicago. Her solo exhibitions include shows at Siena Heights University (2013), Heaven Gallery (2014), the Annex Gallery at Lillstreet Art Center (2014) and Witness, an evolving, durational installation at The Stolbun Collection (Chicago 2017), that could only be viewed via a live broadcast through a Nestcam. Now that the installation is complete, you can watch it via time lapse. Her solo show Sacred Secular is on view through October 4, 2017 at Indianapolis Art Center.