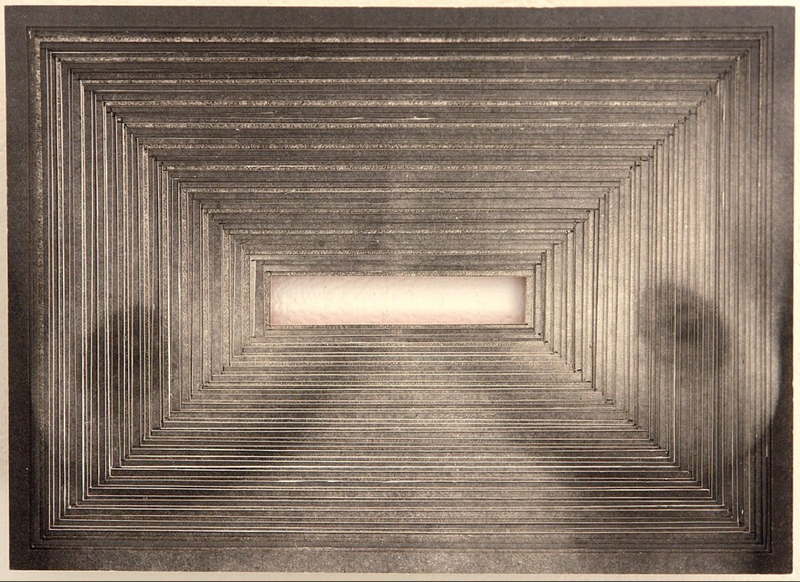 GOLNAR ADILI's sculptural works add a tactile third dimension to autobiographical images and text. Drawing on her multiple displacements and coming of age in post-1979 Tehran, she uses repetitive methods—cutting, splitting, folding, sewing—to explore universal experiences of longing and separation. Golnar earned her BFA in painting from University of Virginia (1998) and her Masters in Architecture from University of Michigan College of Architecture + Urban Planning (2004). She has been an artist-in-residence at the MacDowell Colony (2006 and 2013), Smackmellon (2012) and Fine Arts Work Center (2010 and 2011) and is a 2013-2014 Pollock-Krasner Foundation grantee. Her two-person show, Displacements: The Craft Practices of Golnar Adili and Samira Yamin, opened in January 2014 at the Craft and Folk Art Museum in Los Angeles.CONTEXT: Language as Medium and Message in Contemporary Art, also featuring the work of Aileen Bassis and Erik den Breejen, opens October 15, 2014 at Kingsborough Community College in Brooklyn, where Golnar lives and works.

Golnar Adili: Yes! The two-dimensional images I work with are powerful to me, but they aren’t tactile enough. I massage them, cutting them up and putting them back together in different ways. When I make small pieces from an image and then take time to reconstruct it, in a way I'm processing it. The act of repetitive cutting is soothing and begins to infuse the image with possibility. My need to cut comes from my own fragmented past maybe. . . But I put it back together at the end, so nothing is lost or added. And the new image contains some abstract emotion or movement. 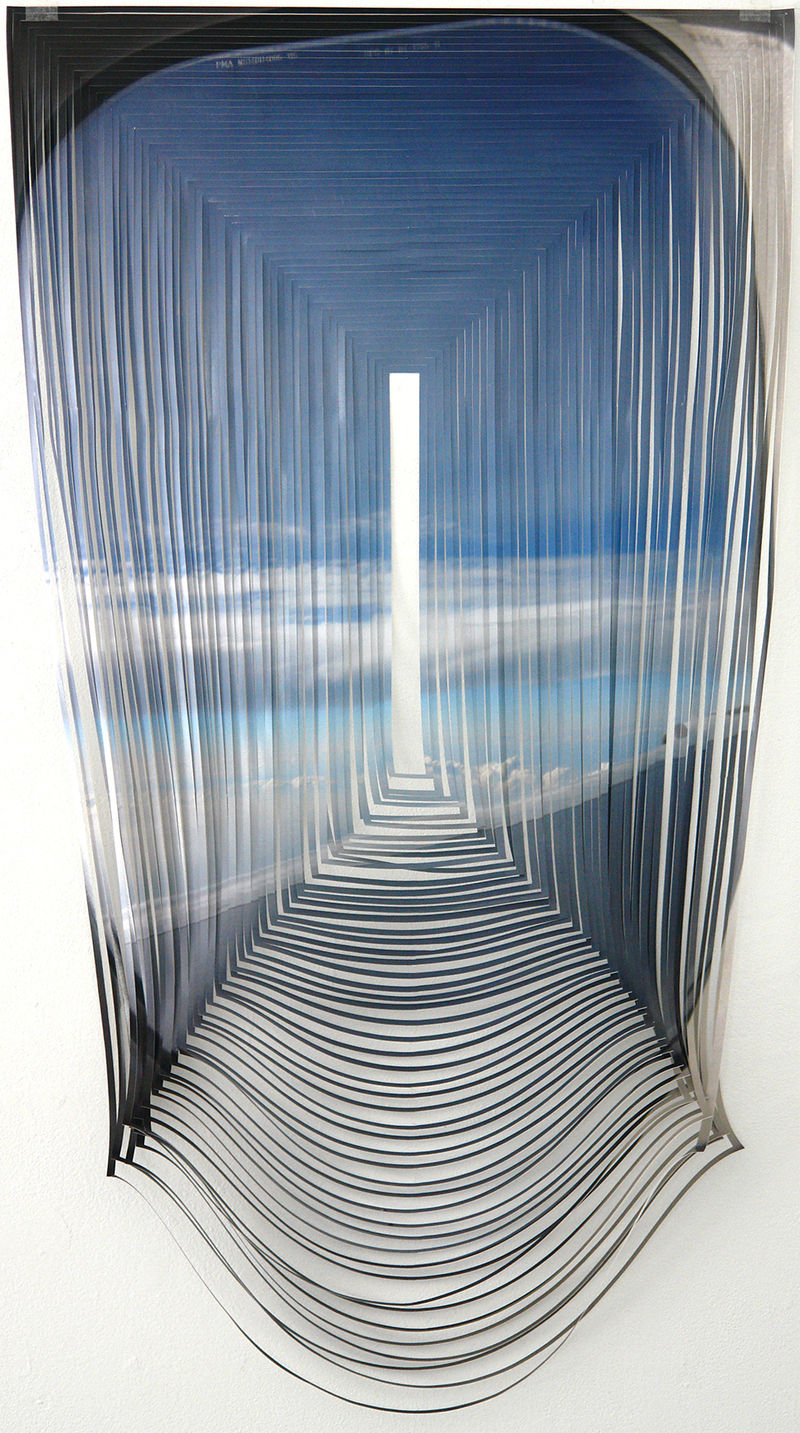 OPP: Could you talk generally about cutting as an aesthetic and conceptual strategy in your work? Is precision an issue?

GA: Cutting is a line, and I use it to draw three-dimensionally. I use stacking or draping to express the cuts. Precision is definitely an issue since the scale of the work and material requires it. I am very comfortable with the #11 exacto knife, which I used for model-making in architecture school. It is like my pencil. I have five of them at any given time.

In my early photo-based work, I used cutting as a way to mix photographs with two different ideas in mind. Inside-Outside (2006) investigates the contrast between the watchful exterior and the free interior spaces of Tehran. This led to time studies where I cut and mixed photos taken one after another to negate linear time. Many of these pieces became "stretched out" and abstract and seem to convey how memory works visually. 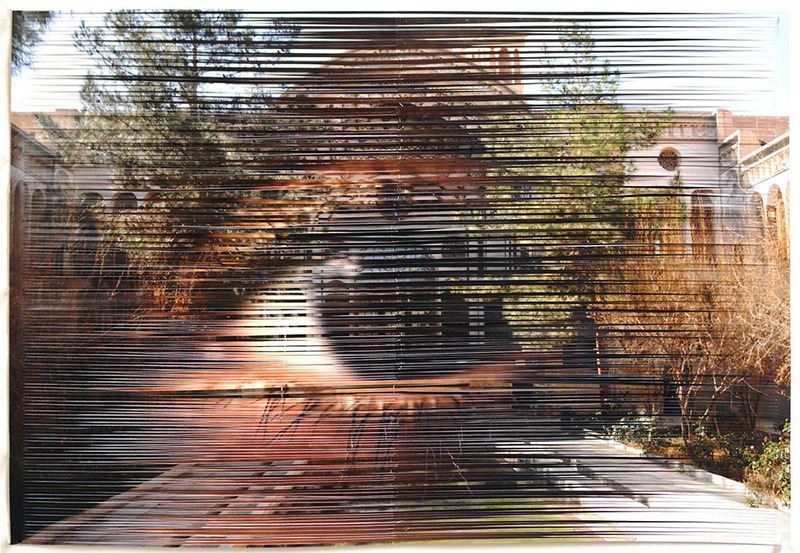 OPP: The digital and the analog meet in photo-based pieces like The King-Seat of My Eye is the Place of Repose for Your Imagination (2011). I read those horizontal cuts of two images together as a splicing of two moments in time that mimics what happens when you pause a DVD or VHS tape right at a scene change in a movie. Thoughts?

GA: I transfer the digital photo onto a paper surface, sometimes repeating that process depending on the piece, and cut the photo itself. There is no other digital process involved. The strips are cut and mixed all by hand, and there is no initial assessing what it will look like with the computer. All the cut photo pieces blur the line between handcrafted and digital processes and forms. This is not a conscious decision, but I tend to go for very clean and systematic processes which are highly repetitive and animate unlikely materials in a soft way. In The King Seat of My Eye is the Resting Place for Your Imagination I wanted to introduce softness and therefore developed a technique where the two photos are cut and interlaced with the thread. I welcome how this highly crafted piece is read digitally. I think at the end it is the juxtaposition of the soft and the hard which achieves this digital look. 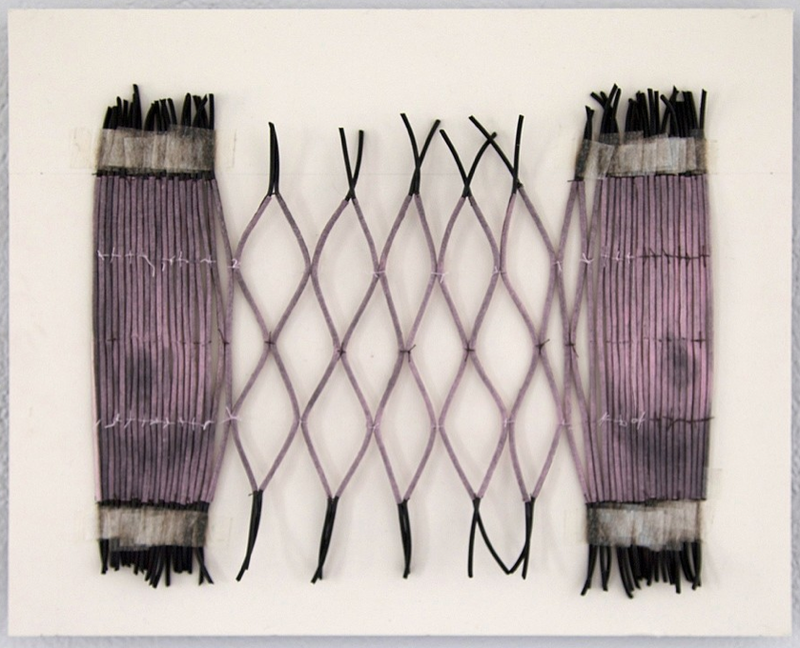 OPP: What is the source for the image of a woman’s chest that you use repeatedly in your cut-paper and latex transfer works? Does it relate to Pillow Chest (2012), which is a very different visual rendering of a chest?

GA: I am very much inspired by Persian poetry, and the chest is one of the reoccurring images in many of the poems. We also have expressions which use the concept of the soul in a vague way which could have different meanings such as the heart or the chest. Sometimes in poetry, the human chest is likened to a chest of drawers. And sometimes in our expression for missing someone or something we say that our heart/chest is tight. . . My own chest feels heavy most of the times—I know it sounds dramatic—and since I work with my own autobiography, I started to investigate my own chest formally.

One particular poem, A Thousand Pages of Chest in a Thousand Pages of Mirror by Yadollah Royaee, a contemporary  Iranian poet living in Paris, inspired this series with a line of poetry that I translated into the title. This particular short poem is about mortality. I started with the two works of stacked, cut chest transfers: one has the curve cut in the middle and the other is the grid-like bowl shape.

Pillow Chest (2012) is actually made of twigs I gathered at Fine Arts Work Center when I was a fellow there. The twigs were the shape of the letter "ی" in the Persian alphabet equivalent to the letter "y" in English. I have a series of work in which I investigated my mother's letters to my father, and in those letters the letter "ی" was of particular interest to me as it was written in an expressive way. In the end, I didn't do very much with the twigs, but I did use some to make the ribcage stuck on a pillow-like backing.

OPP: You have written on your website that your work explores the “separation, uprooting and longing you experienced growing up in post 1979-Tehran.” Separation, uprooting and longing are certainly universal experiences, but because you now exhibit mostly in the United States, I’m wondering if you ever feel like something is lost on American viewers?

GA: I mostly feel that way with the text-based works. Something is lost with non Persian-speaking audiences, but I hope not the entire piece. I count on the process and the material to convey the emotions. In The Pink Letter, I recreated a letter from my mother to my father in the beginning years of what would be 15 years of separation due to political turmoil. At the time, there was no way to know how long they would be apart. It is full of heartbreaking longings. When I inherited my father's belongings after his death twelve years ago, I came across his carefully archived letters. I used a simple repetitive formula to recreate the letter in folds. One can still read the letter, but with difficulty. You have to walk around it and bend over it. If you can't read Persian, you can still decipher the image of a letter.  The repetitive folds produce a moiré effect, sharpening and diffusing focus. The skin-like quality of medical tape and Japanese paper give the feeling of aging, time, fragility and memory. 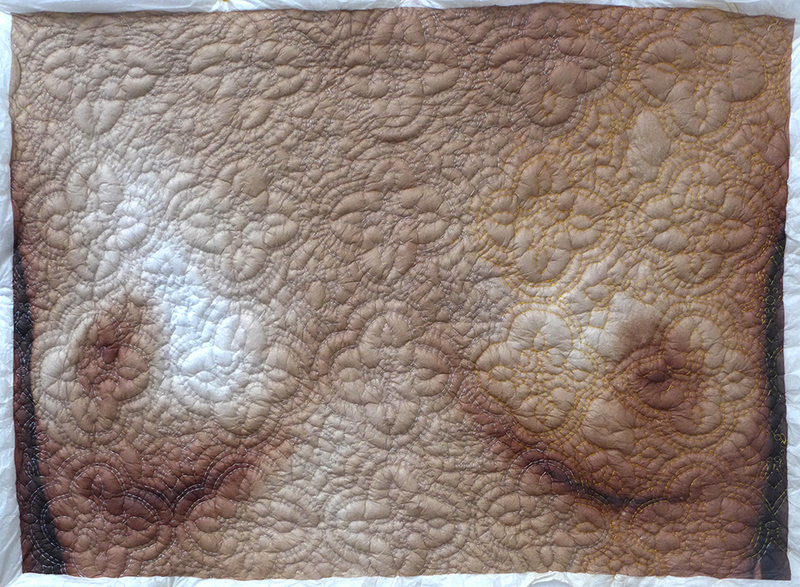 GA: Last year, I was traveling for about nine months. I attended two residencies in Europe: La Napoul Art Foundation in France and The Bellagio Residency Program, The Rockefeller Foundation in Bellagio, Italy. I was also preparing for Displacements: The Craft Practices of Golnar Adili and Samira Yamin at the Craft and Folk Art Museum in Los Angeles. It was a bit nerve-wracking, and I decided that I should be making light-weight, transportable works.

I love sewing and working with fabric and paper. The Japanese paper provided an amazing hybrid. I could print on it and then sew it due to its high fiber content and strength. I really like the idea of something being both strong and fragile at the same time. Once again, I used the chest image. This time I sewed over it a familiar floral pattern found on glass that was used a lot when I was growing up in Tehran. This pattern is very nostalgic for me. Just like patterned glass, the embroidery on top of the chest blurs and abstracts what is behind it. It’s like tattooing the memory of home on my chest. The piece is titled Deltangi which literally translates to "tightness of the heart." 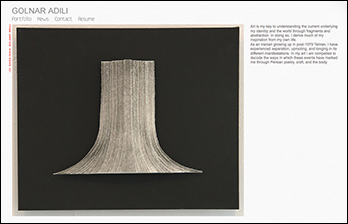 Featured Artist Interviews are conducted by Chicago-based, interdisciplinary artist Stacia Yeapanis. When she’s not writing for OPP, Stacia explores the relationship between repetition, desire and impermanence in cross-stitch embroideries, remix video, collage and impermanent installations. She is an instructor in the Department of Fiber and Material Studies at The School of the Art Institute of Chicago, where received her MFA in 2006, and was a 2012-2013 Mentor-in-Residence at BOLT in Chicago. Recent solo exhibitions include I Still Haven’t Found What I’m Looking For (2013) at Klemm Gallery, Siena Heights University (Adrian, Michigan) and Everything You Need is Already Here (2014) at Heaven Gallery in Chicago. Here|Now, a two-person exhibition curated by MK Meador and also featuring the work of Jason Uriah White, is on view at Design Cloud in Chicago from July 25 - October, 24, 2014. Stacia is one of six artists participating in a conga line-style, evolving group exhibition at The President’s Gallery at Harold Washington College. The Condition of the Frog Is Uncertain, curated by Jason Pallas, is on view through November 7, and there will be a closing reception on Thursday, November 6 from 5:30 - 7:30pm.