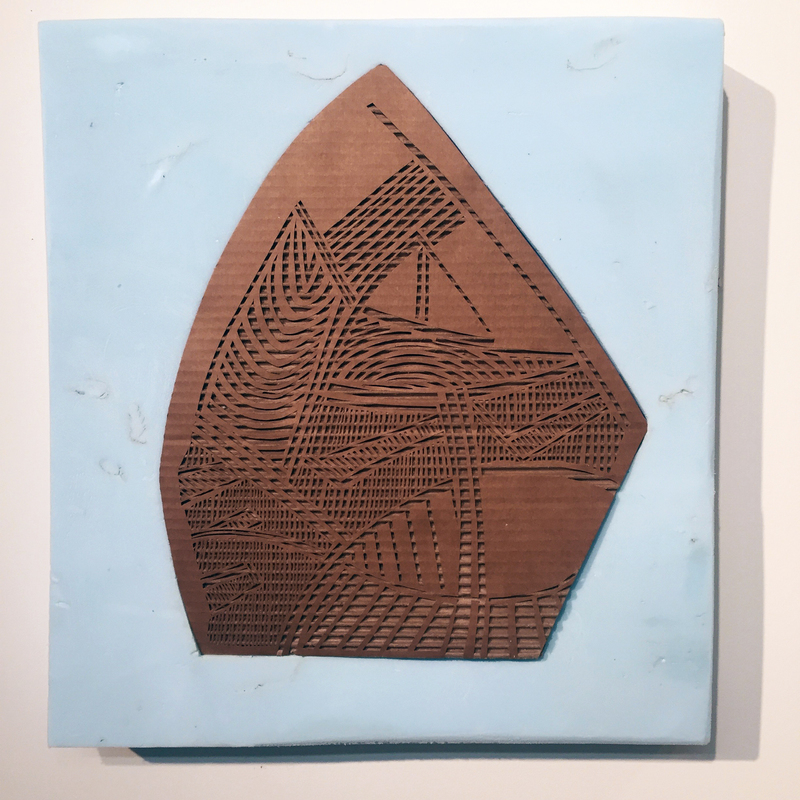 Since beginning his career in 1978, GARRY NOLAND has explored so many materials: National Geographic magazines, corrugated cardboard, bubble wrap, wood, pvc pipes, marbles, duct tape, foam, just to name a handful. His studio practice is primarily driven by process and material. In sculptures and textile-like surfaces, he emphasizes pattern, surface and texture as the byproduct of actions like cutting, marking, taping and gluing. Garry earned his BA in Art History at the University of Missouri in Kansas City, but he’s always been a maker.  His long exhibition record began in 1980, with notable recent exhibitions at Haw Contemporary (2015), the Kemper Museum of Contemporary Art (2014), Nerman Museum of Contemporary Art (2014) and Bemis Center for Contemporary Arts (2013). On April 16, 2017, his solo show Unorganized Territory will open at Tiger Strikes Asteroid in Chicago, and, in the Fall of 2017, he will open a two-person show with Leigh Suggs at Artspace in Raleigh, North Carolina and a two-person show at Los Angeles Valley College Art Gallery in Van Nuys, California. Garry lives and works in Los Angeles, California.

OtherPeoplesPixels: Is there an underlying thread that connects the materials you choose?

Garry Noland: One of the answers regarding materials relates to the non-human part of nature. We are part of the world around us, yet in a separate, contemplative position. Nature has many materials: gases, minerals, animals, plants and the breakdowns into smaller parts (water vapor, sand, insects and pine needles, for example). Nature's processes—evaporation/condensation, sedimentation, reproduction and seeding—are an incessantly-recycling pattern of life. They inform the "studio practice" that is Nature. Jackson Pollack's statement "I am Nature" gets at the artist's natural role in working with whatever material is at their hand. Nature teaches us to apply our energetic, creative impulse to solve problems that a set of materials poses to us. A new material simply presents new problems or challenges. A familiar material will present new challenges based on skills we've acquired in our subsequent actions. The underlying thread is what can I learn? and how gracefully can I solve the problem? 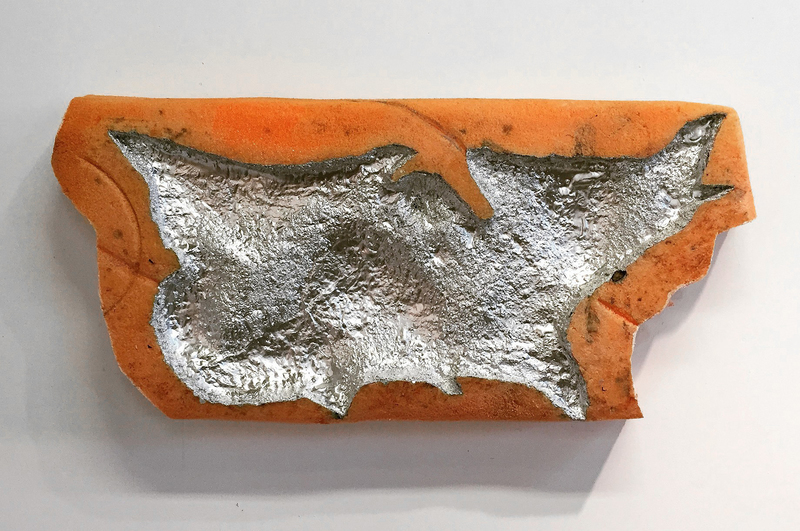 OPP: You don’t seem to be drawn to Nature’s materials, but to human-made things: “found and reclaimed materials from alleys, side streets and urban dumps.”  What draws you to materials generally? Any new finds that you are excited about in your studio right now?

GN: Right now I am using corrugate, polystyrene, paper, wood and some mild adhesives. I am using simple verbs: Cut, tear, place, adjust, glue. Nearly all of the materials are found, free or very inexpensive. Part of the attraction is that these materials have been through another use. This other use, not to mention the process in which they were originally created imparts spirit to the material. . . it is the farthest thing from inert. The found marks in dock foam or the folds, scraps and abrasions add a layer of experience to cardboard. It is part of my job to augment it by leaving it alone or adding to it. I know that new materials will come along or that I will find new use for something I already thought I knew something about. 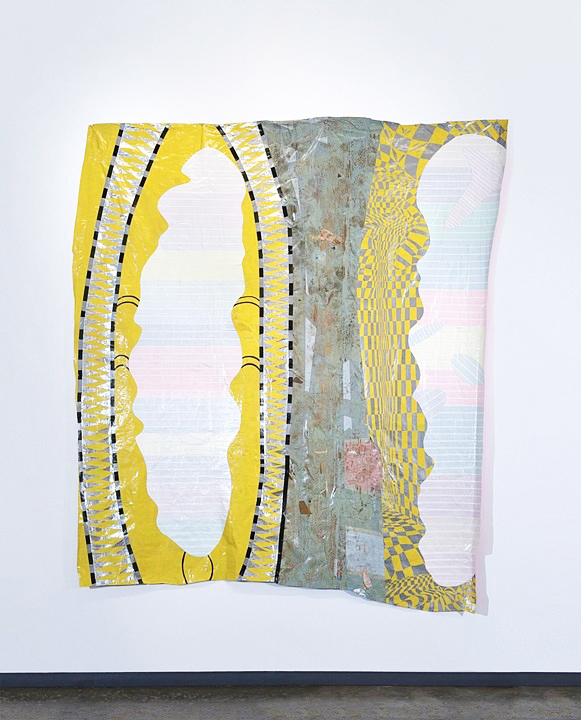 OPP: In your statement, you say “Sometimes I am the boss of the material but just as often the material, by virtue of a chance arrangement, for example, will tell me what needs to be done.” Could you say more about making in this way? What’s the process feel like for you? Will you tell us a story about a piece in which the material led you more than you led it?

GN: One might infer that I have a collaborative relationship with the material. Material is inseparable from the "artist". It is possible to see potential in every single thing. Metaphorically then, as well, there is potential in every single person. In general this brings me great joy. I am solving problems I could not have foreseen minutes or years before. Simultaneously new work explains often what was going on in an older piece....a kind of studio deja vu. I keep a lot of material in the studio precisely because I know that chance arrangements or views askance will reveal combinations I could not have rationally thought of. An example is the piece tilted Failed Axle. There was a spool of bubble wrap in the studio to use a packing for an outgoing work. Several feet beyond the spool lay a curved piece of orange PVC pipe. Out of the corner of my eye, it looked like that the pipe was coming out of the spool, like an axle. The piece made itself essentially. I am a grateful intermediary. 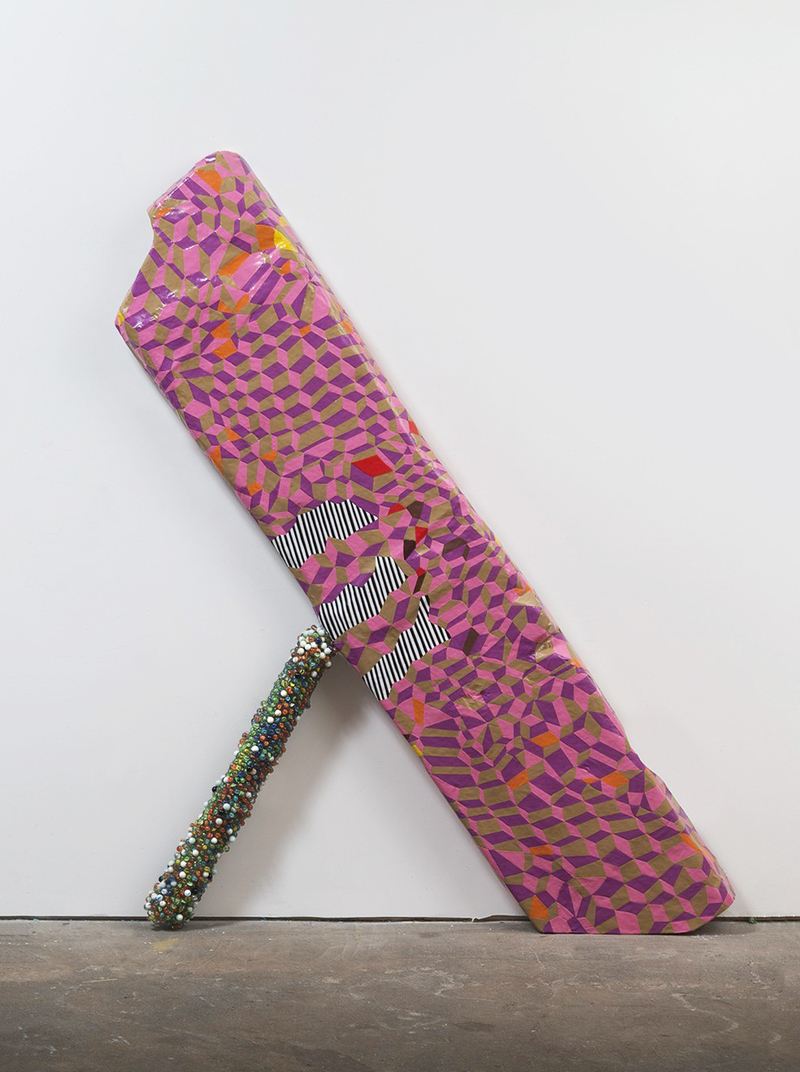 OPP: Your application of marks—as cuts, tape, paint or marbles—to the surface a variety of substrates, functions differently across your body of work. I’m thinking about the difference between works like Pumpjack (Sergeant) (2015), which have complete surface coverage and the wall-hung sculptures from the Handheld series (2014). When is it about hiding the underlying surface and when is it about highlighting it?

GN: Pumpjack (Sergeant) is a good piece but I know that, like every other piece, it is on the way to something else. Part of the impulse behind the complete coverage was to produce a design to supplement the object. . . to cover an object with images of objects. I love pattern and surface design. One of our jobs as artists is to find out "what goes with what.” Relationships between materials may be abrasive, copacetic or somewhere in between. In Pumpjack the tape presents a way for the eye to move around the object as does the application of marbles on the PVC armature. How do the marbles act with the tape pattern? How does the tape pattern work with the slabby foam block? How does the eye move around the whole thing? How does the slab act with the wall and floor. How does the painting/sculpture work with the viewer.

I hope, in the end, we ask how we relate to each other. The Handheld series (which were pieces cut off from the corners of Failed Monuments) used the gold tape (implying luxury) next to the "low-brow" foam and found marks. The exchange between tape and foam, gold and found marks was more direct and I think more honest. 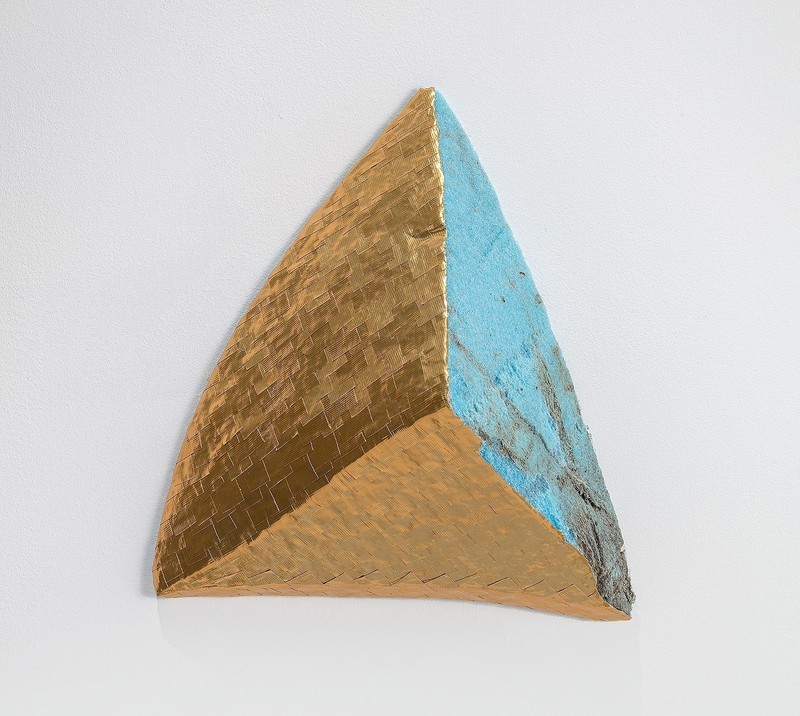 OPP: I think of your taped wall-hung works more as textiles than paintings. They have a textile logic to them, in the sense that the image appears to be part of the structure, as opposed to applied to the surface of another substrate. Thoughts?

GN: I like and appreciate that reading! The image (if we agree to call "it" that) not only is part of the structure, but is/or represents the structure in full. That is, they are one in the same. The question becomes how can we merge image/object; form/content; female/male; figure/ground, among others, for example. This was written about by Lucy Lippard in OVERLAY and was at least a sub-topic in Cubism.

OPP: What role does balance—compositionally, physically and metaphorically—play in your work? 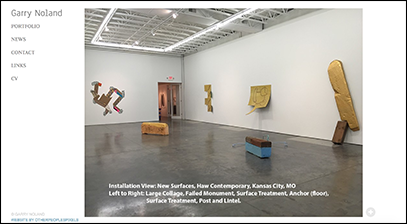 Featured Artist Interviews are conducted by Chicago-based artist Stacia Yeapanis. When she’s not writing for OPP, Stacia explores the relationship between repetition, desire and impermanence in cross-stitch embroideries, remix video, collage and impermanent installations. She is an Adjunct Assistant Professor in the Department of Fiber and Material Studies at The School of the Art Institute of Chicago, where received her MFA in 2006, and was a 2011-2012 Artist-in-Residence at BOLT in Chicago. Her solo exhibitions include shows at Siena Heights University (2013), Heaven Gallery (2014) and the Annex Gallery at Lillstreet Art Center (2014). She created site-responsive installations for Form Unbound (2015) at Dominican University and SENTIENCE (2016) at The Ukrainian Institute of Modern Art. Resist the Urge to Press Forward, a two-person show with Brent Fogt, is on view at Riverside Art Center (Riverside, Illinois) until April 15th, when there will be a closing reception and artist talk. Throughout March 2017, Stacia is working on an evolving, duration installation at The Stolbun Collection (Chicago). You can watch Witness change via live feed.