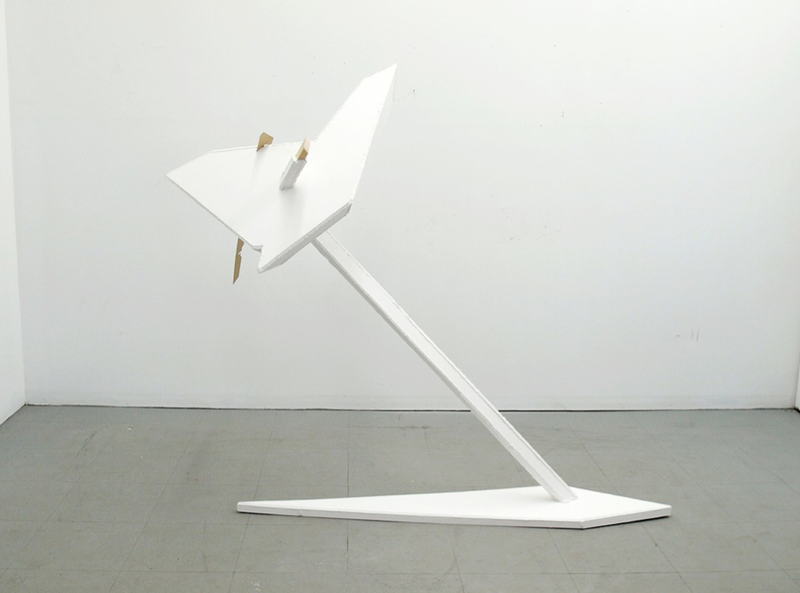 Illusions of material, weight and balance are precariously at play in DICKSON BOU's angular, faceted sculptures, which  obliquely reference architecture, airplane wreckage and paper airplanes. Working intuitively, he first familiarizes himself with the inherent qualities of his chosen materials—white foam core, wood grain contact paper and textured floor underlay, to name a few— then allows the outcome of each conscious decision in his process to lead to the next. Dickson earned his BFA at the University of Western Ontario in 2009) and his MFA at the University of Victoria, British Columbia in 2011. He has exhibited in The Windsor Biennial (2011) at the Art Gallery of Windsor, Firstness (2012) at the defunct Tumble Contemporary Art in Winnipeg, Manitoba and Bracket(ed) (2013), a two person show also featuring the work of Thomas Chisholm. Dickson recently opened N+1 Cycle, a vintage bicycle shop, with Jason Hallows in London, Ontario, where he lives and works.

OtherPeoplesPixels: What role does materiality play in your work? What are your favorite materials? Have you ever worked with a once-loved material that you ended up hating after creating art with it?

Dickson Bou: I've always described my work as “materially driven.” Every piece starts with a material that I've been obsessing over in the studio. I experiment with it, figure out what I can and can't do with the material and go from there. My favorite materials are the types that allows me to make work that seems more substantial than it actually is. The more recent white, angular sculptures are good examples. They are foam core made to look like welded steel. It was important for that work to be able to shift back and forth between substantial and fragile. I would never hate a material I once loved, but I usually exhaust materials like you would exhaust a song or record by playing it one too many times. 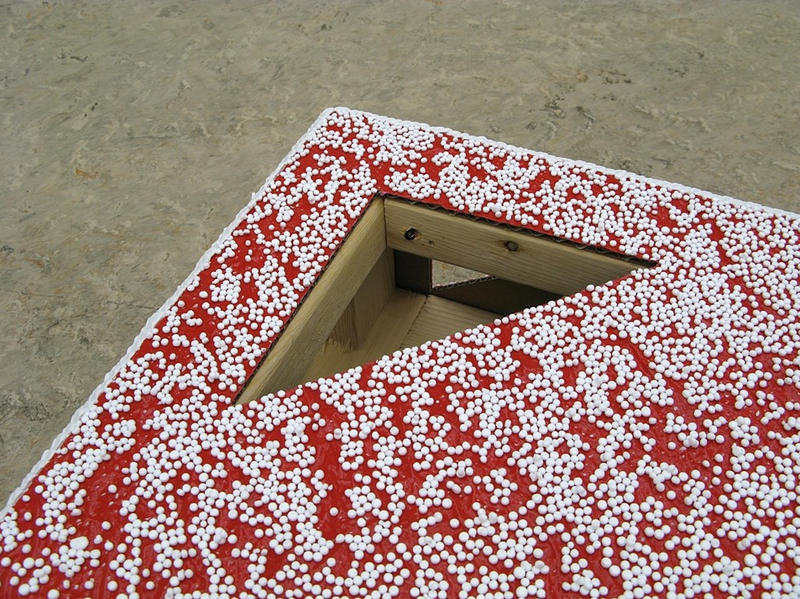 Fall Inside a Winter
2010
Detail

OPP: I know what you mean about overplay. But sometimes, after enough time has passed and the context has shifted, I rediscover a song that I had grown tired of in the past. It sounds both familiar and refreshed. Has that ever happened with a favorite material?

DB: I haven't used this material in a while, but I do really like the red and white floor underlay, and I would like to use it again in the future. It's very other worldly, strange and full of possibilities.

OPP: In The Delicious One, Fall Inside a Winter and Poppy, and the Natural Satellite series, all from 2010, surface treatment and texture take center stage and overall design assumes a supporting role, although they are definitely working together. Recent works made of white foam core and woodgrain contact paper, yield much quieter surfaces, allowing angles, line and balance to be the dominant features. Was this a conscious shift?

DB: It was a conscious swift. In 2010 I wanted my work to be limitless. At the time, the only way I knew how to go about that was to keep adding and adding, layering and layering, whether it be another type of material or another idea. This was how I approached art making until I made the piece The Twins. After that piece, I felt I had exhausted that way of working and the materials I had been using. I had gotten too comfortable and needed a change. I thought the best way to this was to totally go the opposite direction and turn the volume down. 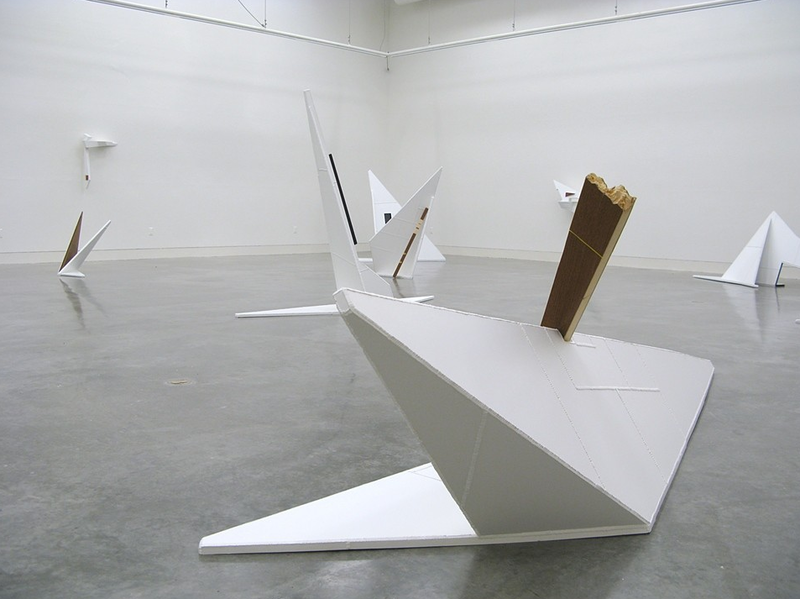 OPP: The hard angles, lines and sense of balance in your free-standing sculptures makes me think a lot about architecture, design and planning. But I read in a review/blog post that your process is more intuitive than I expected. Tell us a little about your working process.

DB: There's not much planing before the making. There's a bit, but really the second step is determined by the first and third is determine by the outcome of the first and second. I do have a lot of interest in architecture and design but not really in how things are planned and laid out. I think if I was to get hung up on that side of things, the work would be very different. I wouldn't enjoy the process as much. There is something really valuable and organic about paying attention to the outcome of each step in your process and using it to steer the outcome of the finished piece.

It's funny you ask about planning and architecture. I'm currently working on an art project in collaboration with my friend Jamil Afana, who is an architect. When we first started talking about working together, I explained to him how I don't draw things out, that there's no drawn plan to go by. It kinda blew his mind to work in this way, and I asked him if he was sure he wanted to do this. He replied with, “I think it's going to be a challenge, but also very fun.” I thought that was pretty funny. We're still experimenting in the studio with forms and materials, but we’ll be building a structure together. It's a slow process. Both of us have busy schedules. Jamil is a PhD candidate in Hispanic Studies at Western University, and I work a day job and run a vintage bicycle shop. It's always a challenge to work with another person; it takes more time, patience and lots of communication. 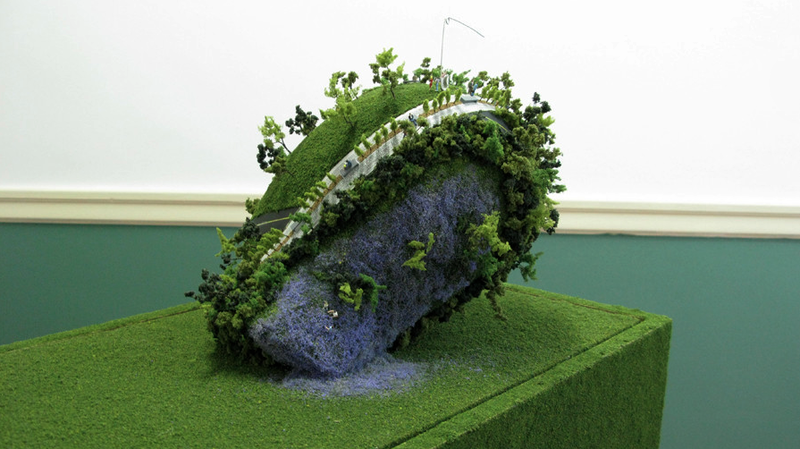 OPP: Early works Parkhead (2008) and From Faraway (2009), a series of small-scale sculptures, are reminiscent of architectural models for city planning. They are like plans for public parks that couldn't exist in reality: imagined, self-contained environments holding self-contained, ambiguous narratives. There appears to be a shift away from narrative and towards material and spatial exploration around 2010. Is this true? Do you imagine a narrative in any more recent works?

DB: There was a swift away from small-scale models but not away from narratives. I noticed that people really latched onto the models, maybe more so to narratives presented by the models. I was more interested in the shift between scales than the actual narratives the scale models presented. With Parkhead, the safety pin is the one thing that occupied both scales. If you look at the piece in 1:1 scale, it's a head with a safety pin on top of it. But in 1:148 scale (or N scale in the model train world), it's a Claes Oldenburg sculpture in a park. I was interested in how Parkhead can bring you in and out of worlds (or scales) depending on your perception. The models became too literal and too easy for people to get hung up on. They became distracting, and I wanted to explore new territory.

With Wood & White, my 2011 MFA Thesis show, I wanted the viewer to experience the narrative more directly. I wanted viewers to feel like they were walking through a plane crash or navigating around icebergs or sinking ships. Each piece in Wood & White keeps the narrative moving. I'm more interested in putting viewers inside the story than giving them one to look at. 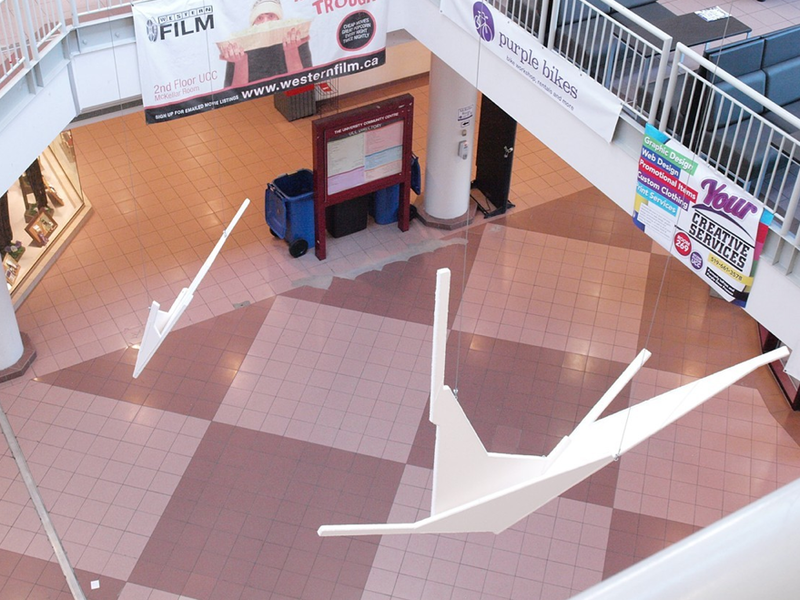 OPP: Could you talk about Cherry Blossom Shipwreck (2013), in which you hung four sculptures in the atrium at the University Community Center (UCC) on University of Western Ontario's campus? The pieces could be viewed from all three floors of the UCC. Many of the pieces resemble the work from Wood & White. The forms are very similar, but the installation completely alters their nature. On the ground, the sculptures remind me of airplane wreckage. In the air, they evoke paper airplanes and origami cranes.

DB: I made Wood & White knowing that viewers would walk around each piece and work their way through the exhibit. It's different with Cherry Blossom Shipwreck; you can't go through and around each piece, but you can view them from under and above. I related this way of viewing to outer space. Since Wood & White resembled airplane wreckage so much, I decided to look into spaceship wreckage. One of the pieces is inspired by the nose of the Millennium Falcon. At that time, I had also just moved back to London, Ontario from Victoria, British Columbia and was thinking about the cherry blossoms there and how pretty it was when the flowers floated through the wind.

DB: I'm kind of on hiatus right now. I recently opened up a vintage bicycle shop with my friend Jason Hallows called N+1 Cycle here in London, Ontario. The summer was busy—which is great—but I'm looking forward to the down time over the winter to focus on my artwork. I've been playing around with metal, which I use to think it was too heavy and cold. But I met Dan Bernyk in my MFA program at the University of Victoria. I was blown away by how he was able to bring out metal’s light and warm side. I also started fixing old steel bicycles and really got into custom Randonneur bicycles hand-built by the French in the 1940s-70s.Their craftsmanship and innovation is very inspiring. Beauty and form through function have been on my mind a lot lately, so we'll see if it will work it's way into my future projects. 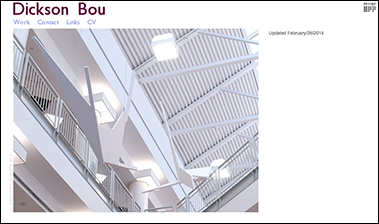