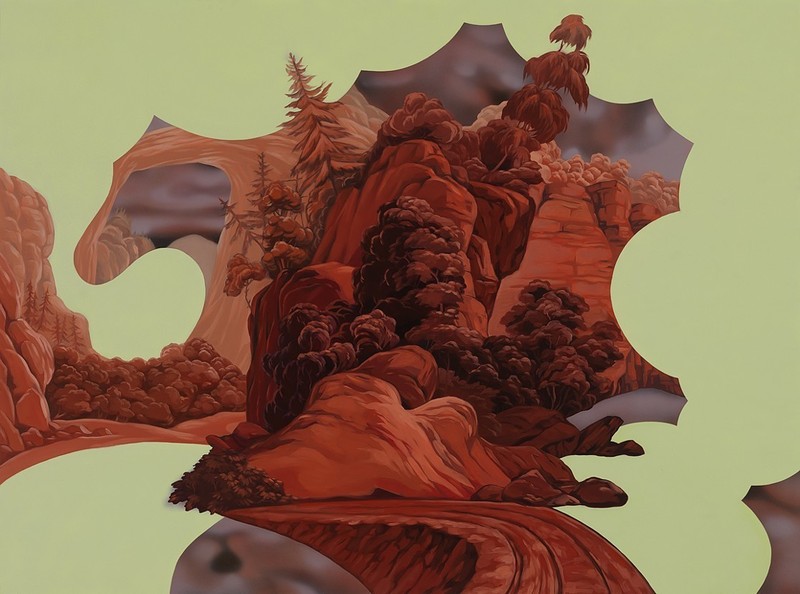 CRISTI RINKLIN’s luscious landscapes are dense with undulating forms that hover somewhere between smoke, clouds, waves and vines. Beginning with digital collages constructed from details of existing landscape paintings, she seamlessly combines opposing styles, highlighting the “virtual reality” that has always been present in painting. Cristi graduated Magna Cum Laude with a BFA from Maryland Institute, College of Art in 1989 and earned her MFA from the University of Minnesota, Minneapolis in 1999. Her numerous solo shows include Diluvial (2012) at the Currier Museum of Art in Manchester, New Hampshire and Paracosmos (2010) at Boston’s Steven Zevitas Gallery, where she is scheduled to have another solo exhibition in January 2015. Before then, you can see her work in Forecasted: Eight Artists Explore the Nature of Climate Change at Northeastern University in October 2014. Cristi lives and works in Boston.

OtherPeoplesPixels: I would describe your style as a mash-up suggestive of illustration, painting, printing and digital manipulation. Your hard, graphic lines evoke Japanese Ukiyo-e landscapes, commercial illustration and comics, while soft fields of color remind me of watercolor landscapes and pictorialist landscapes. How does this amalgamation of styles get at your conceptual interests?

Cristi Rinklin: There definitely is a mash-up of painterly vocabulary happening in the work, and the references you identified, especially Japanese Ukiyo-e and pictorialist landscapes, are among the various works I’m sourcing. I start with elaborately orchestrated, digital collages combining details of paintings and backgrounds that are manipulated to create a seamless, yet impossible space. At times some of the objects in the paintings are in complete opposition to each other: flatness collides with atmospheric depth, and graphic linear forms overlay fleshy, voluminous shapes. I’m working towards a dreamy ambiguous space that is reminiscent of landscape, a familiar place where we feel grounded but which is in flux. It is either being created or being destroyed—or both. 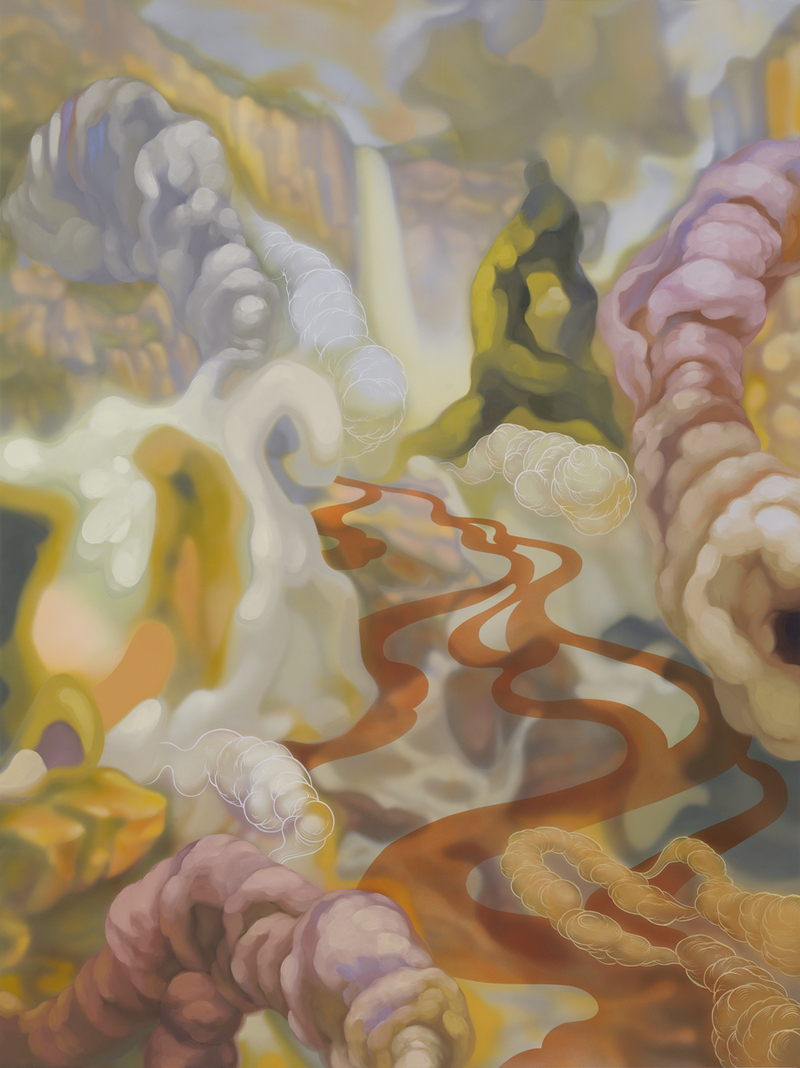 OPP: The recurring, visual forms in your work border on abstraction while still evoking ambiguous landscape forms. Billowy, organic shapes appear in some works to be smoke. In others, these forms evoke waves and waterfalls, clouds and vines. Did you set out to create this ambiguity of form or did you discover the versatility during the process of painting?

CR: I’m interested in referencing landscape as something that is part of a deep memory, as if it no longer exists, and our impression of it is ambiguous, abstract or hard to pin down. Because the paintings start as digital collages, the manipulation and ambiguity is achieved in the studies that I create. I use a collected vocabulary of imagery and forms that I’ve been compiling over many years. The studies resemble the final paintings, but they don’t have the fleshy surfaces and great depth that the paintings have. Although the paintings are more or less predetermined, there are certain decisions and outcomes that happen during the process of painting, However, it’s less about improvisation and more about continually nudging the painting towards the thing I want it to do.

OPP: Take us back to the first time you made a painting based on a digital collage. Why did you first start working in this way?

CR: I first started working from digitally manipulated images in grad school, which was in the late 90s. At the time, it was a relatively new tool for art making, and I found that scanning and manipulating source material was a very convenient way to generate images for paintings. At first it was very basic and perfunctory, but the more I experimented with Photoshop, the more I became interested in how the computer has such a specific pictorial language that the way we see has become calibrated to screen space. I intentionally push colors to look synthetic, rather than organic, and I want the images to retain this feel of an artificial space. 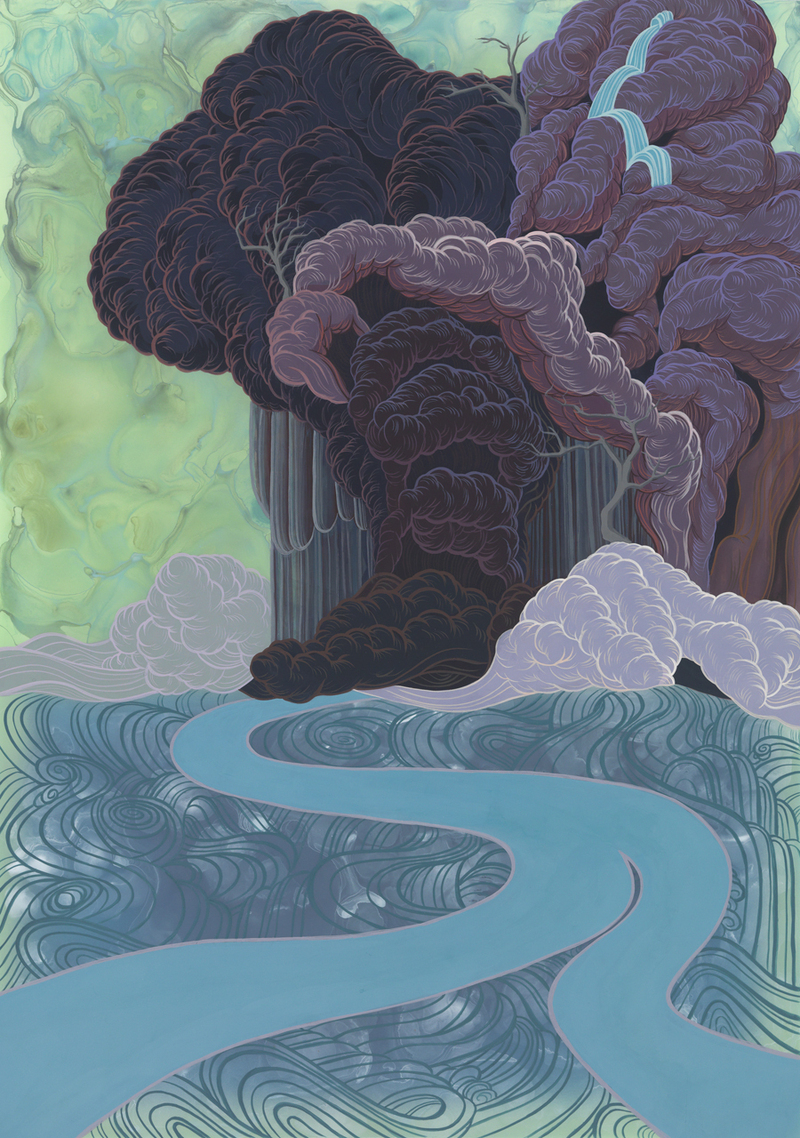 OPP: I have to admit that I can't stop thinking of the black smoke from the television show Lost (2004-2010) and the title sequence from Dr. Who when looking at your work. Are either of these a visual reference for you? Can you give us some specific examples of non-painting influences?

CR: That’s awesome that you thought of Lost. The black smoke was fascinating to me because I have long been interested in the physical representation of ephemeral things. The best example I can give of this is smoke and clouds in Renaissance prints. They always look solid and fleshy, and often times they’re carrying people, angels, saints, etc. It’s like the divine transportation vehicle. A lot of the billowy forms in my paintings look as if they are sentient, like they’re consciously advancing, sometimes in a menacing way. When the Iceland volcano erupted a few years back, I was enthralled by all of the images in the news and on the Internet of all that billowing smoke. While it was so beautiful to behold from a distance, it was also a reminder of how powerless we are against the fury of nature. 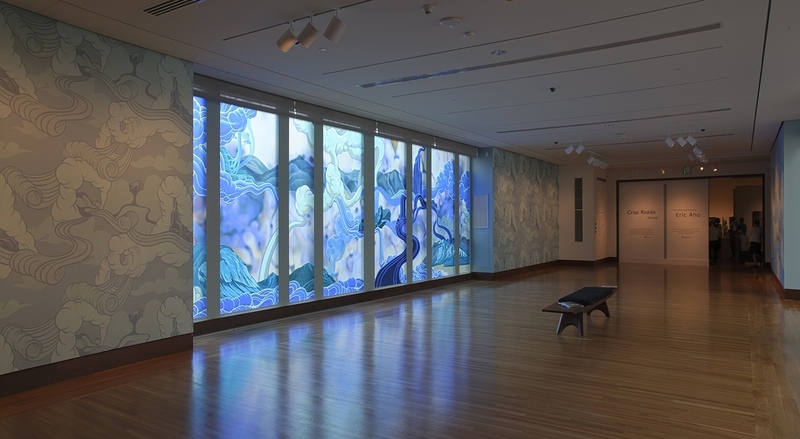 OPP: In 2012, your installation Diluvial at the Currier Museum of Art (Manchester, NH) was an immersive environment that included printed wallpaper and a wall mural and used the existing window as a light box for your Lambda Duraclear prints. Could you talk about the site-specificity of this installation and how the imagery portrayed a "world undergoing creation and destruction?"

CR: That was an amazing opportunity! I was invited to create this installation specifically for the Currier, in response to its history and its collection. I had done other installations like this previously, and I was excited to take on another large-scale immersive project. The Currier’s collection originated with 19th century American landscape painting, and since I had already been looking at and sourcing a lot of this work, that resonated with me. When I began brainstorming for Diluvial, I also heavily considered the New Hampshire region that was represented in a lot of the paintings in the collection. In my research, I found that many of the artists of this period, such as Thomas Cole and Frederic Edwin Church, were deeply interested in geology. Their contemporaries in the Earth Sciences were attempting to prove that the American landscape was forged by the Great Biblical Flood, therefore giving it divine status. The word diluvial refers to geological formations and deposits that are forged by flood or glacial activity. Because I’m interested in cataclysmic and catastrophic phenomena, this idea really resonated with me, so I set about creating an immersive experience that had the feel of the landscape being swept away by a huge force of water. It’s beautiful as well as terrifying, as great change always is. I often think about what it will be like in a post-human world. What will be gone and what will remain? While it’s scary to contemplate, there is also something poetic about nature surviving beyond human existence. 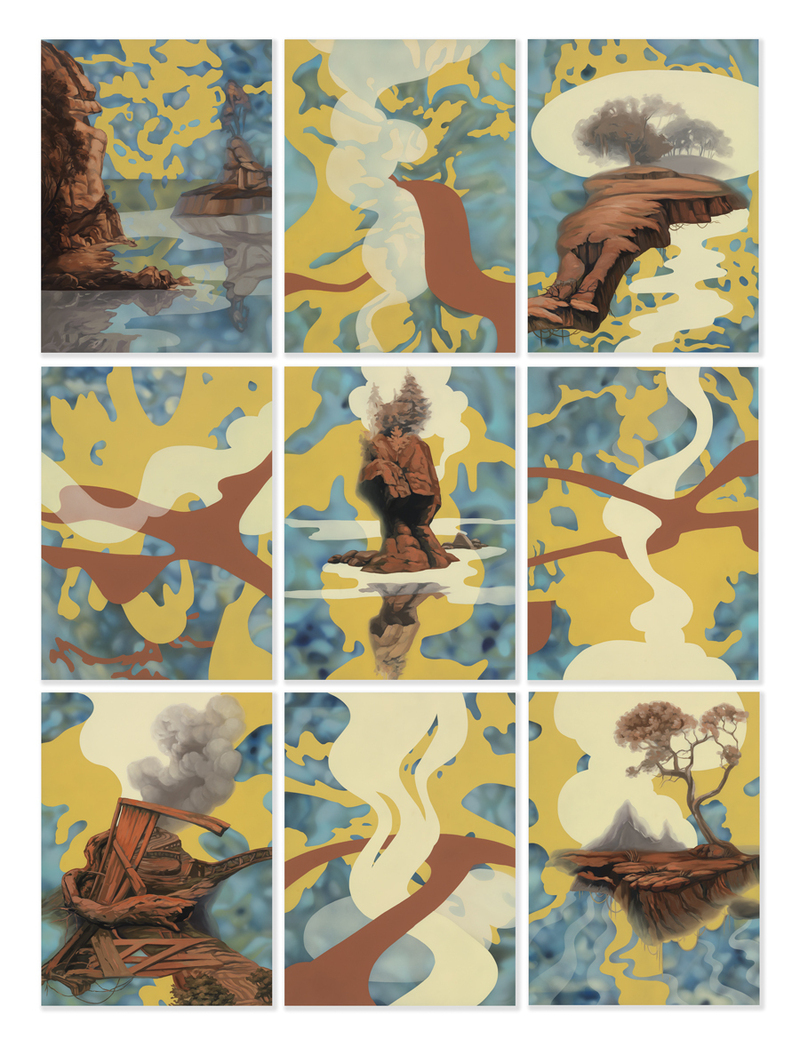 OPP: In your newest work from 2014, there's a distinct collision, not only of painting styles, but also of opposing ethics from painting history: flatness meets perspective. The smoke is now utterly flat to the degree that, had I not seen your previous work, I would not interpret it as smoke. What led to this shift?

CR: If you go back to some of my very early work in the Archived section of my website, you’ll see how the new work has actually come full circle. While making Diluvial, I researched scenic wallpapers and designed one for the installation. I became intrigued by the idea that these scenic wallpapers were created to psychically transport viewers to idealized, pastoral landscapes. I decided that after the installation, I would explore the simplified and idealized space of scenic wallpaper, in which fragmented chunks of landscape float throughout the space. While I was experimenting with sketches and studies for these paintings, I began to ask myself, “what is essential, what is unnecessary and what can I leave out?” When I arrived at the large, flat cloud-shapes in these new paintings, they felt fresh to me. It referred to cloud, but also to a void; it became both positive and negative space. The cloud formation has been a part of my work for a long time, and in these new paintings, it’s simply a new evolution of this form. 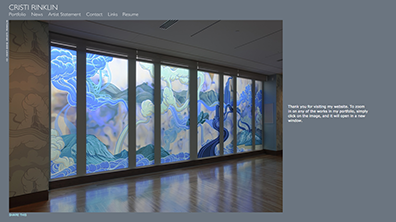