In Balance With
2014
Performance

Mother, artist and academic COURTNEY KESSEL collapses the divide between public and private by performing with her daughter Chloe and bringing the objects of her everyday life into the gallery. In performance, video and installation, she "strives to make visible the quiet, understated, and often unseen love and labor of motherhood." Courtney received her BFA in Sculpture from Tyler School of Art (1998) and completed an MFA in Sculpture & Expanded Practices and a certificate in Women’s & Gender Studies (2012) from Ohio University. In 2014, her solo exhibition Mother Lode opened at David Brooks Art Gallery, Fairmont State University in West Virginia, and she performed as part of New Maternalisms (2014) at the Museum of Contemporary Art in Santiago, Chile. Jennie Klein has covered her work in a chapter titled “Grains and Crumbs: Performing Maternity” in the hot-off-the-presses Performing Motherhood: Artistic, Activist, and Everyday Enactments. E.g. Courtney Kessel: You and Me is on view at Brigham Young University Art Museum (Provo, Utah) through May 2015, and her work is included in the upcoming group show Mother at University of Southern Queensland Arts Gallery (Toowoomba, Australia). Courtney is the Exhibitions & Events Coordinator for the non-profit arts organization, The Dairy Barn Arts Center and teaches in the School of Art at Ohio University in Athens, Ohio.

OtherPeoplesPixels: Your sculptural installations and performances mostly revolve around the themes of balance and space as they relate to motherhood. You've collaborated with your daughter in the creation of works like In Balance With, which has been performed a handful of times, the video Sharing Space (2012) and the cut plywood sculptures of Spaces in Between (2012). How did this collaboration begin and how has it evolved? Is your daughter a decision-maker in the work or a performer?

Courtney Kessel: In Balance With was first performed in 2010.  At the time, my daughter Chloé was 5 years old. She informed the work and was an active participant, but she was not so much a collaborator. During that first performance, which was for a small audience of maybe 20-30 invited guests, I didn’t know exactly how the piece was going to end. I had been communicating with Chloé throughout making sure she was comfortable and okay. After I reached a balance, I asked if she wanted to come down. She said no. It was then that I realized the performance is over when she is no longer interested and occupied. It is a metaphor for our lives together. I can only do my work so long as she is content.

Now that she is older and understands the work differently, she has had an influence on things. We were at a restaurant one day, and she was cold. I had on a cardigan. She sat on my lap and put her arms inside my sleeves. It was she who said that we should do this as a performance. That’s where the video sketches became Sharing Space.

OPP: In your recent solo exhibition Mother Lode (2014), you created three sculptures made from "curated household items." For anyone who has ever been in a home with children, it is clear that all this stuff takes over. It is constantly being moved, cleaned up, reorganized. It encroaches on the environment. I love the way these "monuments" allow you, as the mother, to play and build like a child while simultaneously reclaiming the adult space of having a art practice and art career. Can you describe the process of curating the objects?

CK: I love how you understand these pieces! They are very much monuments that tower from floor to ceiling. Not that my house looks this way. . . but it feels like it! These sculptures derive from In Balance With: they include the household items that were on the seesaw. These things from home became like self-portraits that change each time. They are specific to us, though not so specific that others cannot relate.

The curated aspect of the selected objects truly holds the meaning; those proximities and juxtapositions make each work different. That was the fun part for me! Like you said, it allowed me to pretend and play the same as Chloé does at home, but in the gallery in a very formal way. I actually took a U-Haul trailer to my parents’ house to get some of the stuff. THEY had children (three of us and then grandkids) and still had mounds of toys, books and things lying around. They are preparing to retire soon and will downsize, so I just gave them a head start! The work really is to visibly demonstrate that children do take up space, both physically, but also mentally. Once they are in your life, they are always there. . . no matter how old they get. I call this the “eternal maternal.”

As I went through the objects at our house and my parents' house, I was looking for things that could create structure like furniture, drawers, a dollhouse built by my dad, a car seat, a TV. Then I looked for sheer quantity. I went through books, stuffed animals, small plastic toys, VHS tapes and more with the intention of these things telling a story. From Cabbage Patch Kids to Finding Nemo, there is a timeline of "stuff." But there was a limitation: I couldn't take things that my siblings would get mad at me for taking. . . :)

OPP: Was there a construction plan before you began?

CK: Once the truck bed and U-Haul were unloaded into the gallery, I had absolutely NO idea how the towers would look.  Initially, I had planned to take rope, yarn, twine and bungee cords to attach everything together. But once I got started, it became a balancing act. Could I connect the ceiling to the floor in order to architecturally change the space? How did the individual objects change once they were turned on their side and stuffed with other objects? What kinds of meanings were formed by the side by side placements? It was very intuitive, but it was also very formal. Like the formal balance of a post-modern sculpture or putting a mark on a canvas, there were very specific decisions that weren't necessarily based on color per se, but rather based on aesthetic decisions.

OPP: Was your house empty for the run of Mother Lode?

CK: I have an ongoing joke in our house that if I can’t find it, it’s probably in the gallery. . .  I really do the take things that we are currently using and put them in my work. One day, I was looking for a jar of dried beans that I knew I had just had in my hands. I wanted to make soup and was determined to find those beans. I eventually realized that they were in fact in the show. 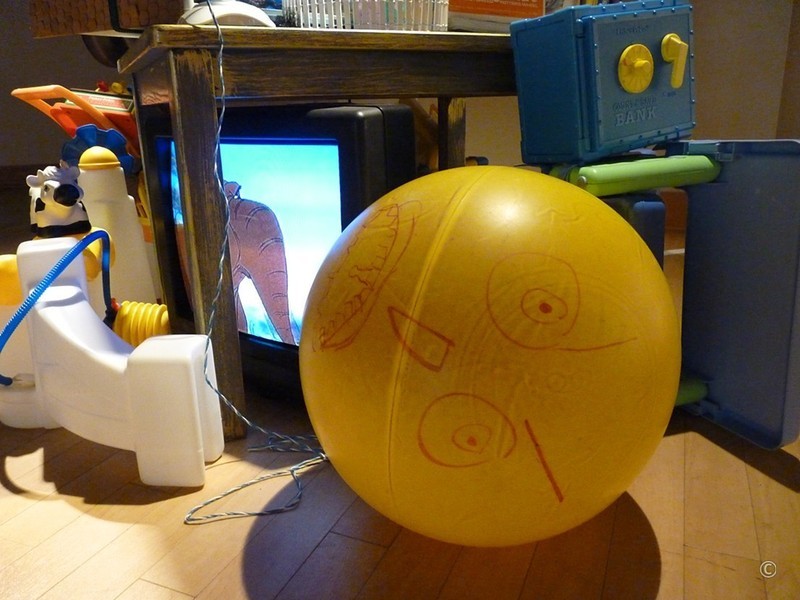 OPP: Will you ever recreate these sculptures as they were in this show?

CK: The sculptures from Mother Lode will never be recreated. Like a portrait, the work will always be different; evolving, changing, and growing. Each time these objects are restructured into a new work, they tell a different story and take on new meanings. In Symphony of the Domestic II, I added to the "stuff" from In Balance With, which represented my daughter and I. It grew to include people who formed my foundation. Like a pedestal holding something up, the base is comprised of items that represented my family, friends and mentors who continue to support me.

The pedestal holds up a 16mm projector which plays a stream of consciousness text: love every body as any body of water mater water under the bridge the gap gape gap her words her story write her story word for word for word for word forward. I used a script typewriter to stamp, print, embed the words onto the film. I am interested in the non-gendered, non-hierarchical aspect of printing or stenciling. Where a pen to paper or brush to canvas has the element of “acting” upon something, I am more engaged with leveling that or flattening the hierarchy. By stamping, printing, imprinting and stenciling, I am able to mechanize/mobilize language to becoming one with the substrate or at least to become equal to it. Each time the film passes through the projector and the other items for that matter, the words slowly degrade and will disappear eventually. 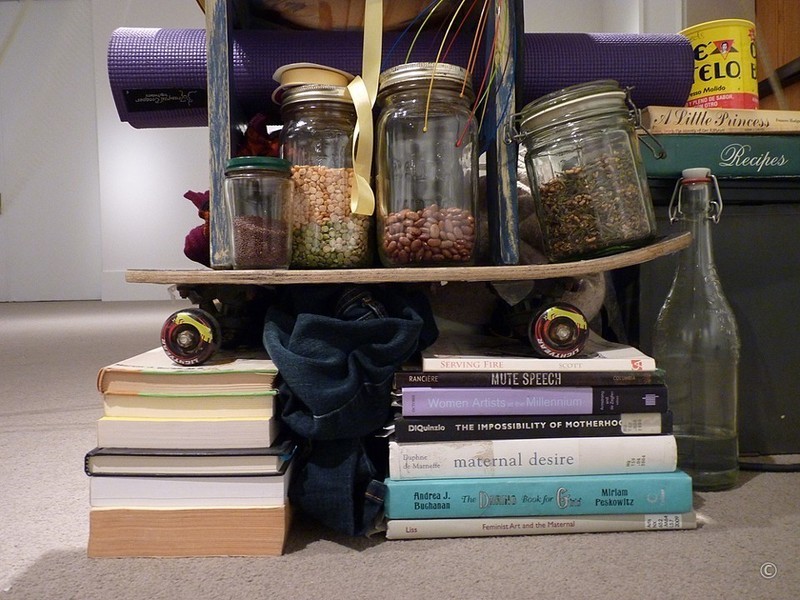 Symphony of the Domestic II (detail)
2014

OPP: Who influences you in thinking about the labor of motherhood?

CK: I think about the labor that Mierles Laderman Ukeles’ work was about. That was the labor of maintenance. It was gendered, but not specifically about mothering. It is important that she put that in the gallery. I reference her because of the politics of placing that gendered and private practice into the gallery. I think about the work that Mary Kelly made that was about her son through the lens of psychoanalysis. That was about mothering, but not so much about the subjectivity of maternity. By placing psychoanalysis in there, she was able to distance herself as a mother but still sneak it into the space of the gallery through the didactic referencing of the objects. 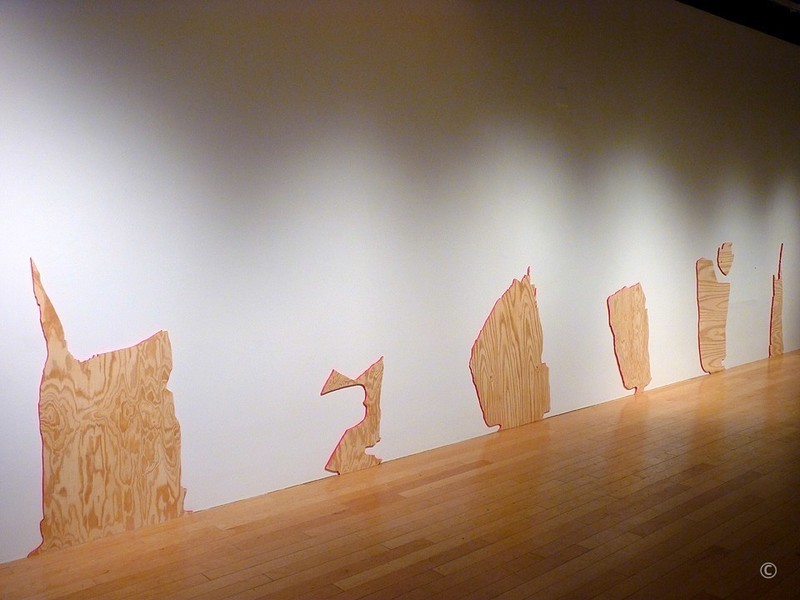 OPP: Do you ever feel like your work is not taken seriously because it is about the labor of motherhood? Have you had any dismissive comments from viewers?

CK: So far, I have not received any dismissive sentiments from viewers or critics. I’m sure it exists, but I haven’t heard any yet. Many people have the ability to relate to my work. Whether they are mothers or children of mothers, viewers witness a little bit of their own experience or that of their mother’s.

I do this work in part as a protest. For all the amazing women artists who have gone before me, who had to hide their maternity for the sake of their careers and for so many who chose NOT to have children for their careers. . . that was one kind of “choice” from the second wave of Feminism. I always wondered why it was so frowned upon to be a mother and a professional. It’s the gendering of those stereotypes that I really can’t stand. Why do girls have to have pink things and boys blue? Why are women trying to hide wrinkles, fat and gray hair, but for men it is fine?

I am interested in putting the specific, subjective experience of the mother in the gallery whether you want to see it or not. It is not some idealized/generalization of the mother, but rather a specific, real experience. 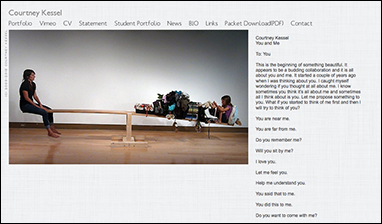