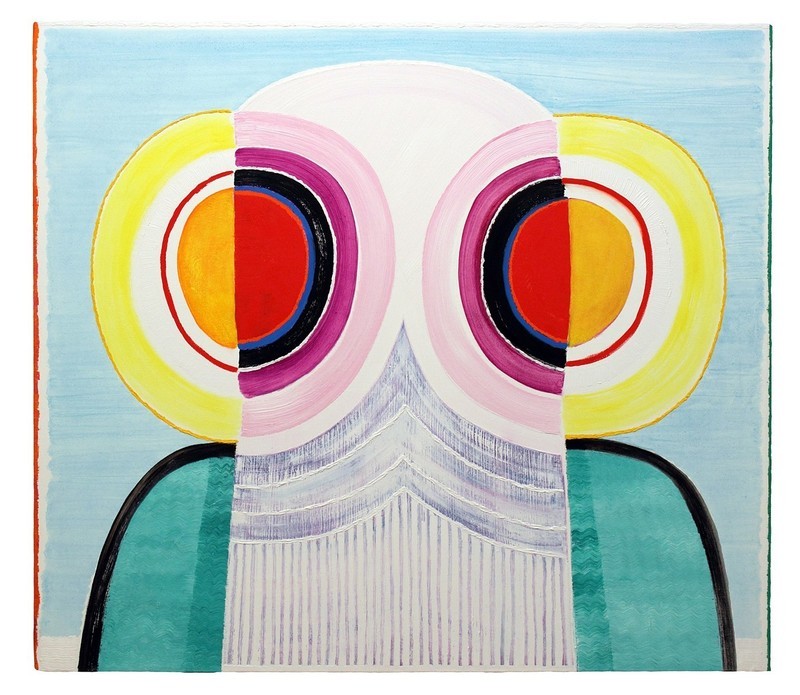 CLINT JUKKALA's color-saturated doorways, windows, and unidentifiable creatures with humongous eye-portals are either goofily mesmerizing or mezmerizingly goofy. In either case, they captivate the eye and speak to the transportive power of looking, being seen and seeing in a new way. Clint earned his BFA from University of Washington in 1995 and his MFA from Yale University School of Art in 1998. Solo exhibitions include Lenses, Portals and Escape Plans at Finalndia University (Hancock, Michigan, 2014), Cosmic Trigger at Bravin Lee Programs (New York, 2014) and Off Course at Fred Giampietro Gallery (New Haven, 2013). Clint’s work was recently included in the group exhibitions HeadSpace (2016) at Morris Warren Gallery and Receptive Fields (2015) at Edward Thorp Gallery, both in New York City, and a two-person show with John Newman (2015) at Fred Giampietro Gallery in New Haven, Connecticut. Clint lives and works in Philadelphia.

OtherPeoplesPixels: Are your portals just for looking through or are they also for moving through? What do you imagine on the other side?

I've always been drawn to the window-like qualities of painting, and paintings that have spaces you can imagine entering. Certain Sienese paintings, like Sasetta, or De Chirico's Piazza paintings really have that quality for me. They are not perspectivally correct and aren't entirely rational, but they are fully convincing worlds that create a sense of place the viewer can mentally project into. I hope my paintings have a little bit of that. I want them to suggest the possibility of a place to transport to. It's less a physical space than a psychological one. What's on the other side is a different way of seeing. 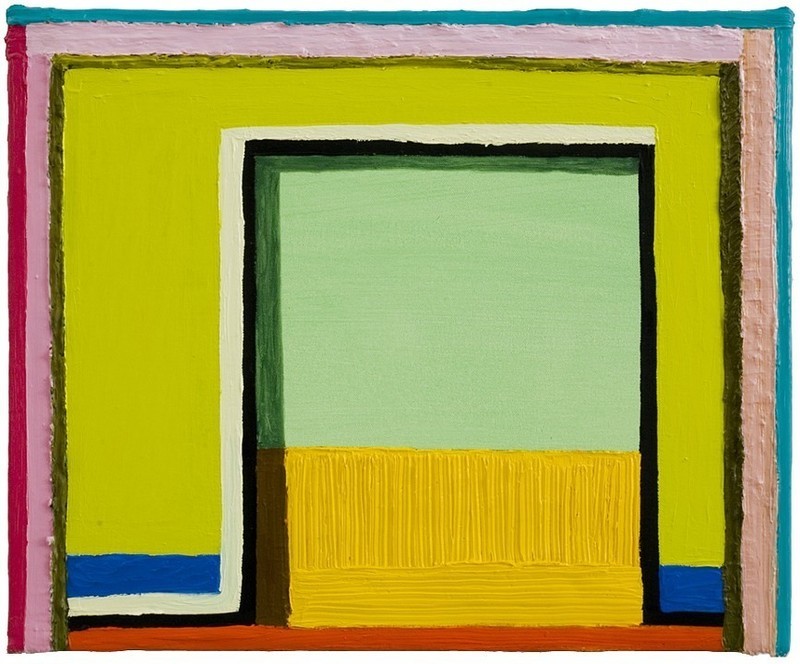 OPP: In an interview with Sharon Butler for Two Coats of Paint, you said “Color is a portal.” I couldn’t agree more. Can you say more about this and how you approach color in general?

CJ: Color is experiential. It affects us on a physical, emotional and psychological level and allows us to access different states. David Lynch's red room in Twin Peaks is a perfect example. The red curtain is so present and it provides a door to entering Lynch's strange world. Of course color is associative too and it conjures memories of places we've been and things we've experienced. Color is a frequency and like sound it can take us out of ourselves and to another place. 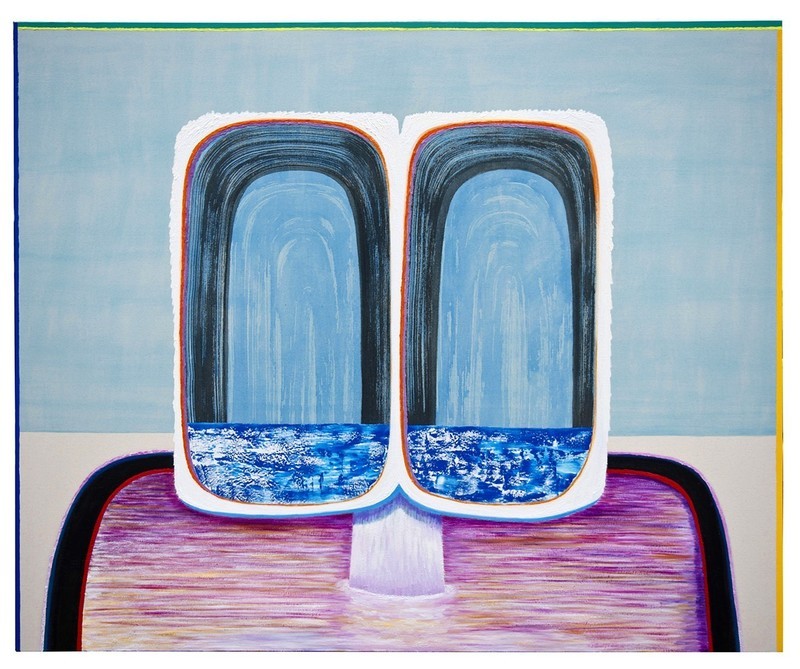 OPP: In recent years, what used to look more like doorways and windows seem to have morphed into eyes or goggles or view finders on the faces of humanoid aliens, muppets or robots like Number 5 from Short Circuit (1986). Whatever they are, they’re staring back at me, and I’m looking through them to some other space. Thoughts?

CJ: That evolution happened unintentionally. I was painting window like forms and one day I doubled them. All of the sudden I saw something staring back at me—it freaked me out! At first the images felt so goofy, and I wasn't sure what to make of them. They were exciting to me though, so I just went with it. I liked that they didn't take themselves too seriously and they had an unnameable thing-like quality about them. I'm interested in that dual situation of the paintings looking back at you while you look at them. I hope they make the viewer more aware of their own seeing. 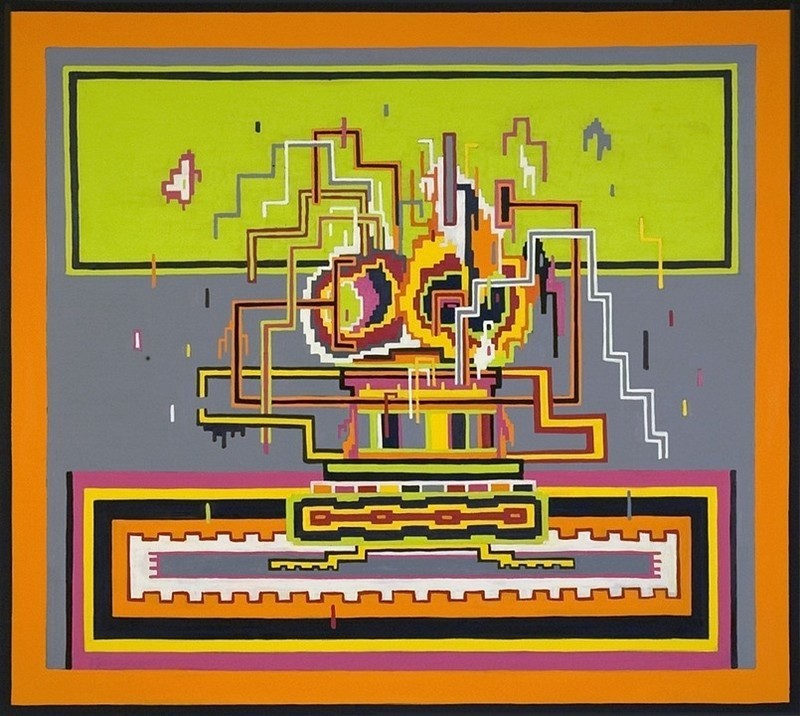 OPP: Earlier paintings from 2005-2007 evoke computer glitches, digital noise and Atari graphics—I’m thinking of Space Invaders and Berzerk. Were you thinking of the digital realm or video games as portals? Or is this work doing something else entirely?

CJ: Atari was very much on my mind! Those paintings evolved out of grid paintings I was making. I was interested in squares, pixels, textiles and simple building blocks used to make more complex images. Early video games were interesting because you saw the pixel structure that made the images and I've always been drawn to simple systems of image making. I wasn't thinking of those paintings as portals really, but I was interested in screens and I think it was screen space that led me to exploring windows and portals. I was also thinking a lot about the additive light of screens versus the subtractive light of paintings. Screens are lit from within and emit light. That may have been the beginning of thinking about the paintings facing out toward the viewer. 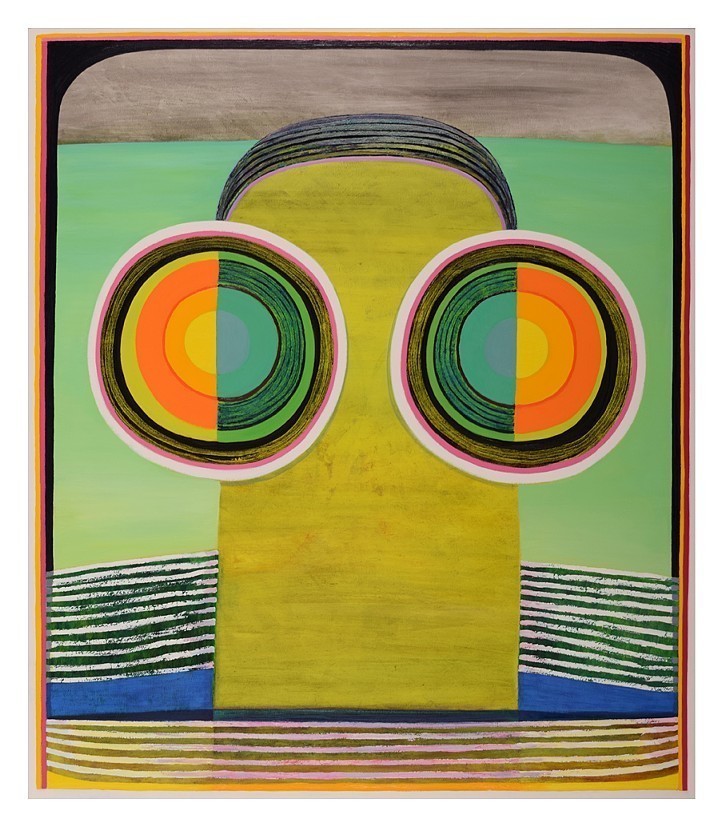 OPP: A year ago, you were appointed Dean at the Pennsylvania Academy of the Fine Arts after having served as the Chair of Graduate Programs at PAFA since fall 2013. How does academic administration affect your painting practice? Any advise for artists with other demanding jobs?

CJ: Teaching and running a program can be wonderfully creative experiences. While I currently have less time to paint, there is so much exciting stuff going on at PAFA that I've been happy to focus some of my creative energies there. Luckily for me, my administrative work extends beyond my office to the classroom and our museum. I'm around art and artists all the time so I get a lot of energy from that. From student work to my favorite paintings in our collection (like those by Horace Pippin!) I'm constantly seeing great stuff. PAFA's historic building, designed by Frank Furness blows me away. It is an incredible space full of amazing ornament. I'm sure it's going to seep into future paintings. I also walk through our cast hall almost daily and see students painting. I don't have as much time to work right now, but when I do get into the studio I have a lot to draw on. Most artists need to have multiple practices to build a sustainable creative life. The key is to find a good balance of different practices that complement each other. 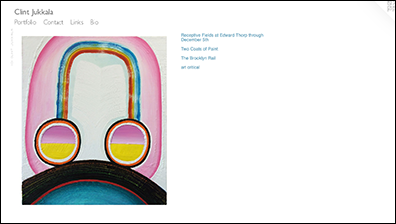