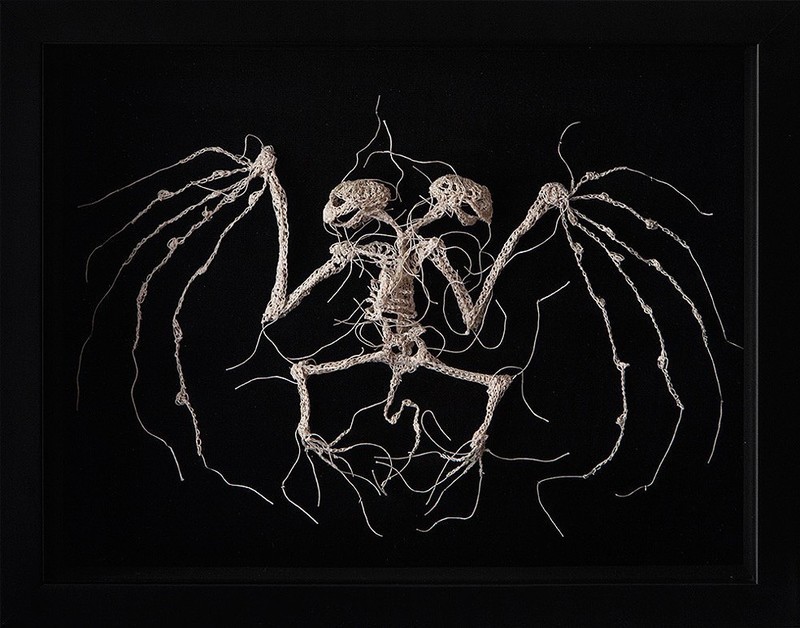 CAITLIN T. McCORMACK draws connections between discarded and inherited lace remnants and the remains of baby birds, lizards and small rodents in her stiffened cotton, crochet skeletons. Her textile bones read as Wunderkammer relics thanks to the black shadow boxes and antique museum vitrines in which they are displayed. Caitlin earned her BFA in Illustration, with honors from University of the Arts, Philadelphia in 2010. In 2015, Caitlin's 2015 exhibitions included three-person show Exquisite Echoes at Gray Gallery, collaborative installation Ex Silentio at The Art Department and solo show Mnemosyne at Paradigm Gallery + Studio. She has an upcoming show with bone-carver Jason Borders at Antler Gallery (Portland, OR) in March 2016, a solo exhibit at La Luz de Jesus (Los Angeles) in June 2016 and a two-person show with Philadelphia artist Sabrina Small at The Mütter Museum's Thomson Hall Gallery (Philadelphia) in January 2017. Caitlin lives and works in Philadelphia.

OtherPeoplesPixels: When did you first learn to crochet? When did it first enter your art practice?

Caitlin T. McCormack: My grandmother was a very talented crocheter; she taught me the basics of the craft. She was actually a bit of a hard-ass, for which I'm grateful. Both of my grandparents passed away very close to one another right after I graduated from college. I inherited a large quantity of cotton thread that my grandmother and her sisters had once used to crochet all sorts of things. Crocheting initially proved to be a mindless, repetitive method of dealing with grief. I eventually found that producing excessively knot-addled, over-stitched bits and pieces allowed me to generate material with more volume than, say, a doily. My grandfather was also a skilled bird-carver, so in an attempt to create a tribute to and a synthesis of my grandparents' very separate creations, I tried to construct what evolved into the brittle, fibrous innards of a wooden bird. 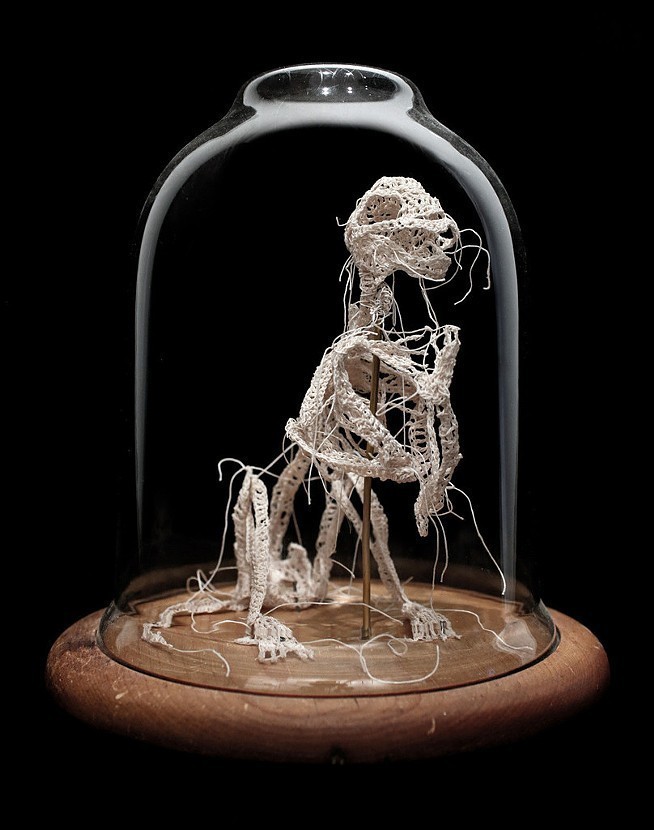 OPP: Many of your stiffened crochet skeletons are recognizable as baby birds, lizards and small rodents, but some are less mundane and more monstrous, like Night Glaive (2015) or Ianuaria (2013). Are these imagined creatures or based on actual skeletons?

CTM: I tend to base my skeletons off of animals that are indigenous to the East Coast, where I'm from—squirrels, deer, foxes, finches, and a variety of domestic animals. My memories tend to center around specific animals that were present during an incident, i.e. the cat that was at the party when this happened, or the squirrel that was sitting on the windowsill when that happened. I grew up in the woods, so animals have always been very important to me and carry kind of a totemic significance. My process involves deviating from a skeleton's authentic form, though, so once I've begun working off of a sketch that has been totally warped by my visual biases, it's hard to say what's going to happen. Sometimes what I produce is so distant from my initial intention that it feels right to incorporate additional, grotesque elements into the structure. 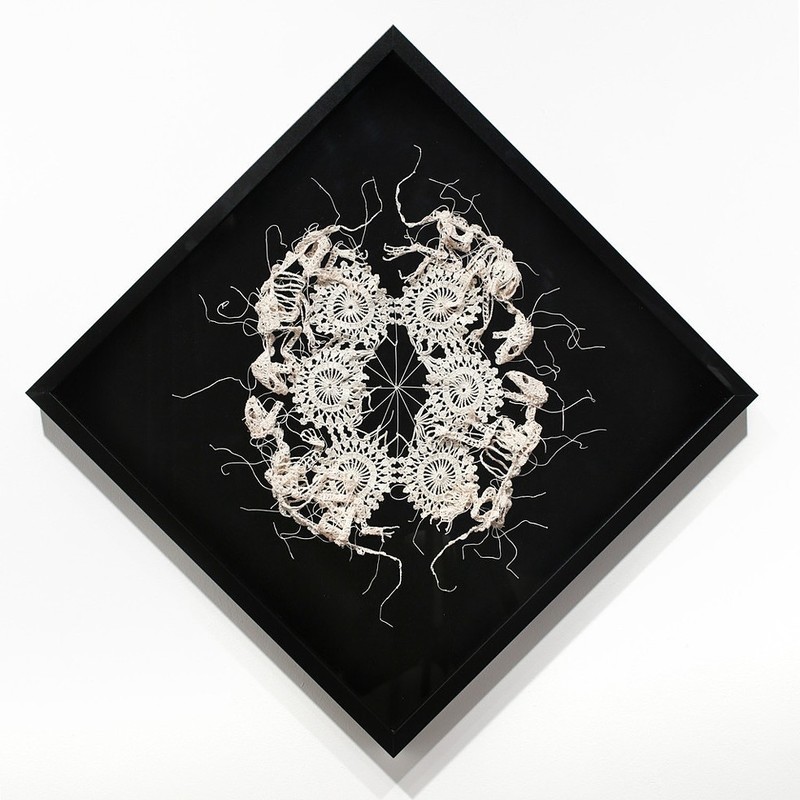 OPP: Lacewilds (2014) and Bound as it Were (2015) combine found textiles with your crocheted cotton string. How do you think about the connection between antique textiles and skeletons?

CTM: When I'm working on pieces in that vein, I like to imagine that a garment has disintegrated and reformed itself in the image of a tenacious animal's remains. It has a lot to do with the persistence and transmutation of memory and how innate the significance of cloth and thread can be in a person's life. I began hunting for found remnants from garage sales and flea markets in an attempt to introduce imagined histories into my work. I enjoy speculating about the possible origins of the scraps, how their undisclosed narratives might compliment or even conflict with my own experiences, and the various ancestral bonds that might still linger in the material. 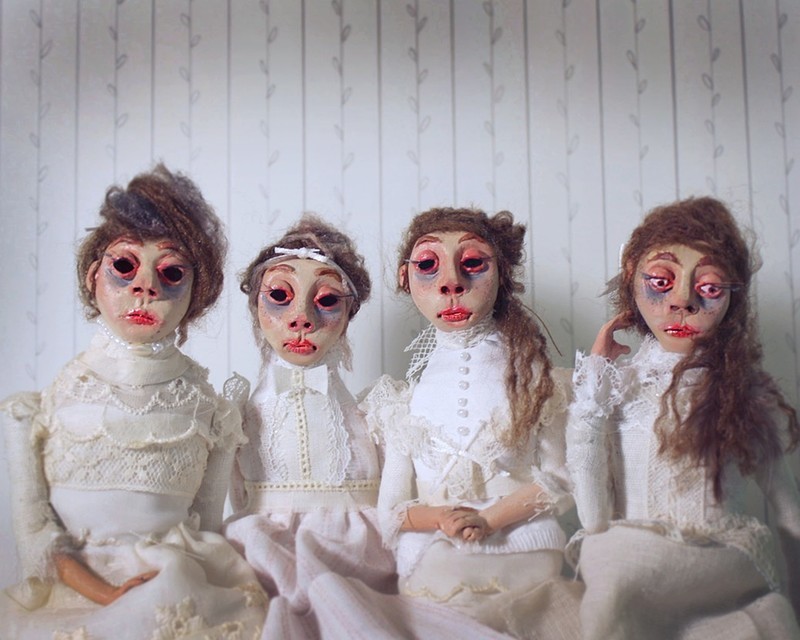 OPP: Tell us about the work in your website section Illustration. Why do you refer to this work as 3D illustration instead of photography? Are these commissioned works?

CTM: I began working on those images during my time at The University of the Arts in Philadelphia, where I majored in Illustration, and used that method to produce my thesis. I think I latched onto the term "3-D Illustration" because it allowed me to indulge in my desire to convey narratives and accompany text with tangible, hand-constructed elements. Using imagery from dreams as inspiration, the works are usually created just for fun. They are occasionally displayed as prints alongside their sculptural subjects. I'm also in the process of creating illustrations for a narrative written by Philadelphia poet, Chris McCreary. 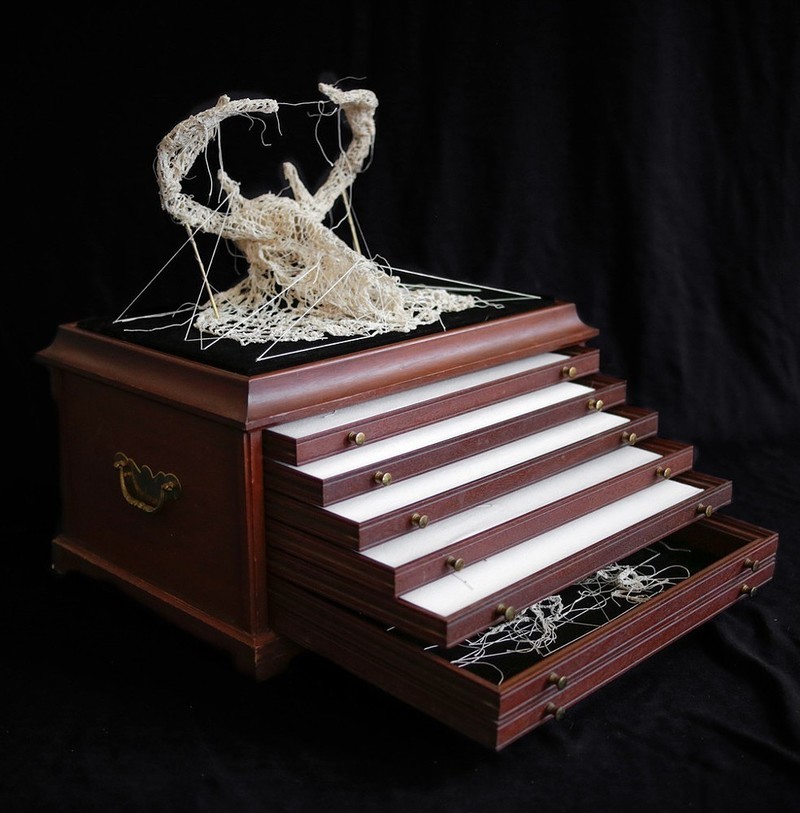 OPP: Could you talk about display in your recent solo show Mnemosyne at Paradigm Gallery in Philadelphia?

CTM: Mnemosyne was comprised of pieces evocative of taxonomical specimens, in addition to works involving found textiles, antique frames and pieces of furniture with sculptures hidden in drawers. With this body of work, I tried to provide a sense of unraveling domesticity, a familiar space that has grown foreign with the passing of time. I intended for this show to be the second installment in a cycle of three exhibits, tracing the way a memory can become warped as it deviates from its authentic, incidental roots and becomes an unrecognizable artifact of a nearly forgotten experience. 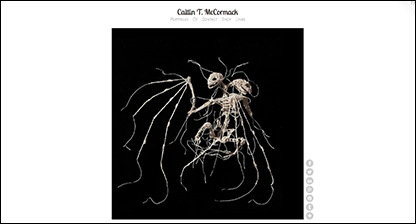 Featured Artist Interviews are conducted by Chicago-based, interdisciplinary artist Stacia Yeapanis. When she’s not writing for OPP, Stacia explores the relationship between repetition, desire and impermanence in cross-stitch embroideries, remix video, collage and impermanent installations. She is an instructor in the Department of Fiber and Material Studies at The School of the Art Institute of Chicago, where received her MFA in 2006, and was a 2012-2013 Mentor-in-Residence at BOLT in Chicago. Her solo exhibitions include I Still Haven’t Found What I’m Looking For (2013) at Klemm Gallery, Siena Heights University (Adrian, Michigan), Everything You Need is Already Here (2014) at Heaven Gallery (Chicago) and When Things Fall Apart, a durational, collage installation in the Annex Gallery at Lillstreet Art Center (Chicago). Form Unbound, a two-person show, also featuring the work of Aimée Beaubien, closed in December 2015 at Dominican University's O’Connor Art Gallery (River Forest, IL).